Old Shanghai lanes once prized for their proximity to busy commercial areas of the city are a repository of precious anecdotes of the past, even as the modern world encroaches.

Such back alleyways are classified as fang and they are close to urban facilities and amenities. Those who still live in fang lanes are proud of their diduan, or location.

Huaihai Fang is of the more famous of these lanes. It is an offshoot of Huaihai Road M., one of the prime retail and commercial streets of Shanghai.

Older Shanghai residents might remember it as Xiafei Fang, a homophonic of its former official name Joffre Terrace, honoring General Joseph Joffre, the commander-in-chief of French forces on the Western Front in World War I. The lane and Huaihai Road M., once called Avenue Joffre, were renamed in 1950.

Most of the houses in Huaihai Fang are three-story brick and timber structures. When the lane was first built in 1924 with investment from the Catholic church, fireplaces were installed on the first floor of every unit. The fireplaces have since been sealed up, but the iconic roof chimneys remain. 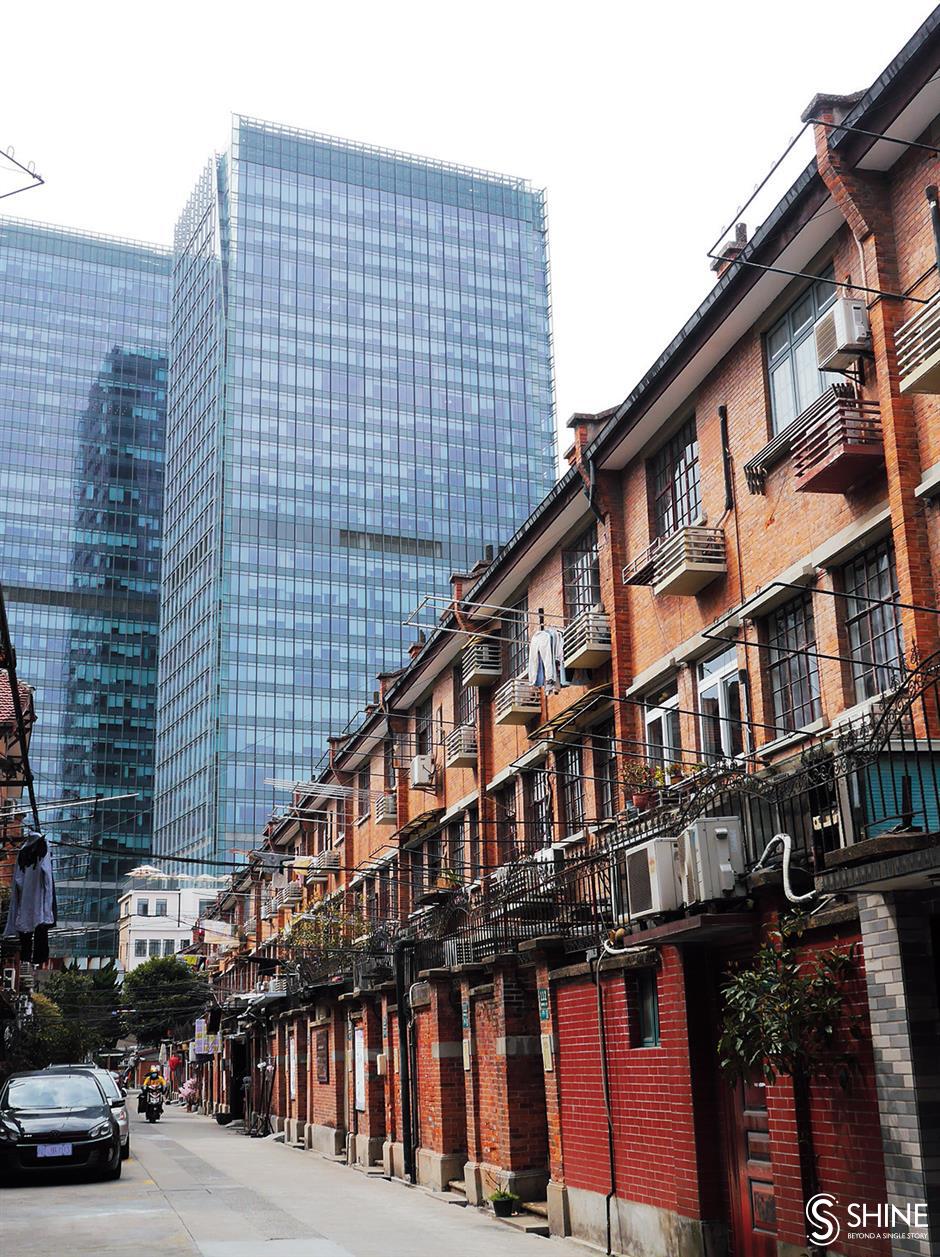 The lane has attracted a celebrity or two in its time, giving rise to colorful stories that have left a cachet legacy.

Records show that around 40 celebrities once resided in the lane, many of them writers and artists. Their names have been carved on some of the walls of their former residences.

The stories they left in their wake are sad, beautiful or scandalous.

One of the residents was writer and journalist Xu Guangping (1898-1968), wife of the renowned author Lu Xun.

After Lu died in 1936, Xu and their son Zhou Haiying moved into No. 64 of Huaihai Fang. There she started to compile Lu anthologies. The third floor of the house was reserved for Lu's books and personal belongings. His manuscripts were concealed among a pile of coals in the kitchen in case of surprise raids.

In 1941, a team of Japanese soldiers broke into the house and abducted Xu. She was imprisoned and tortured for nearly 80 days before she was released. 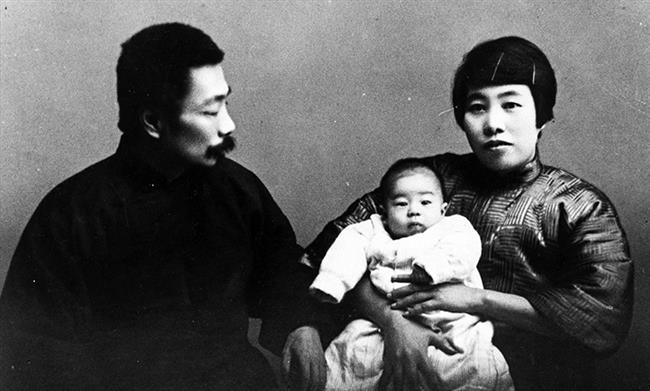 Famed writer Lu Xun, with his wife Xu Guangping and their son

Huang Shang, an author and journalist, recalled that Ba's home on Huaihai Fang was like a "literary and art salon." Authors and artists often gathered in his living room on the second floor.

Ba's adopted son, Ma Shaomi, however, said the only impression he had of the home was that it was crowded.

"There were books everywhere," he wrote in a memoir. "A desk was placed at the window of a study on the third floor, and an iron bed was put against the wall opposite the window. All the rest of the space was occupied by glass-frame cabinets packed with books. A narrow path was left open to access the garret, where more books were piled." 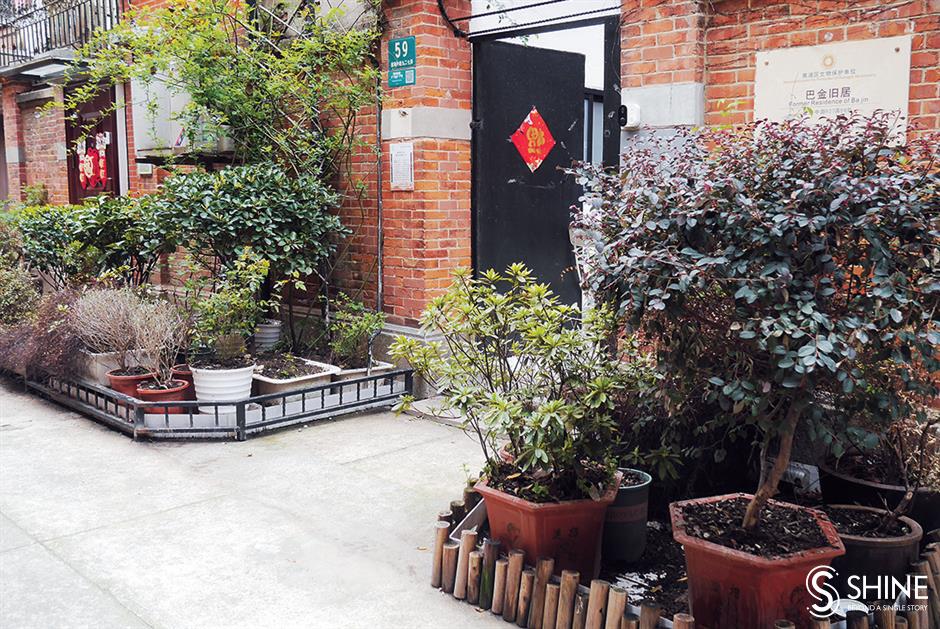 The current owner of writer Ba Jin's former residence has added touches of greenery to the old structure.

House No. 99 was the home of painter Xu Beihong, famous for his ink renderings of galloping horses. His paintings are found in museums worldwide.

The lane was not without its scandals.

Wu Tiecheng, Shanghai mayor between 1932 and 1937, frequented No. 11 on Huaihai Fang, where his mistress lived. It was said his visits to her were kept low-key. But after politician and businessman T.V. Soong survived an assassination attempt in 1933, security in the lane was upgraded when Wu visited and his affair was a secret no longer.

After the establishment of the People's Republic of China in 1949, most houses on Huaihai Fang, like other old lanes in the city, were divided up and shared by multiple families.

The celebrities left, but life went on amid dramatic changes. High walls protecting houses on the lane blocked out much of the development frenzy going on around the lane.

Gong Jing, a modern writer, described her life in the lane as "the beginning of knowing Shanghai people."

She and her husband lived there with her grandmother in the 1990s, as modern high-rise buildings began to surround the lane.

Gong and her family occupied a front room and garret on the third floor in a building subdivided into numerous apartments sharing a common kitchen. The family did have a private bathroom. The staircases in the building were steep and narrow. Gong wrote that she often tripped until she got the hang of "living in Huaihai Fang."

Despite rather basic living conditions, residents such as Gong's grandmother were still proud to own property in what was considered shangzhijiao, a concept similar to "uptown." Gong particularly loved the little lane because she said it was a good place to watch the sunset.

"I loved to stretch my legs on the flat roof and watch the sun go down," she wrote in her work "Life in Huaihai Fang." "It seemed that the sun hung on the chimneys, and its dying rays were like a fire warming the red bricks."

Today, you can still see what is considered "typical" Shanghai lane life there, including sneakers drying on wires that stretch across the lane. Some residents say hanging sneakers on wires was once a way of marking territory, but there is no written evidence of that.

The first floors of some houses have been turned into cafes or small shops, giving the alleyway a touch of new vitality.

It's an area prime for redevelopment. Perhaps the lane will someday become another version of nearby Xintiandi, a car-free shopping, dining and entertainment area that preserves old architecture and culture. But old memories will always remain.

"The grandma living downstairs passed away; the two old ladies from Suzhou left one day and never returned. A man we called Uncle Ruan moved to an apartment near Hongqiao Airport," Gong wrote about her Huaihai Fang neighbors. "Without them, it felt deserted here. But it doesn't matter. We will all be leaving soon enough."

Special Reports
﻿
62422
,
Three villas: a tale of wartime skullduggery
Writers and artists of the past lend old lane a rich history
First bloom signals late start to osmanthus season
Time well spent: The revitalization of a Bund icon
Our prehistoric predecessors: They fascinate us, they scare us
'Red' tourism and culture travel activities abound in Jinhua Week
Near neighbors: The rich history and close residents of Ci'anli Building
Ningbo is becoming a new summer hotspot for tourism
Hangzhou's most popular 'red' tourism sites
Timber temple evokes debate over origins of its architectural style
EXPLORE SHINE