Over 800 varieties of flowering chrysanthemums are ready to welcome visitors to the Second Yangtze River Delta Chrysanthemum Exhibition in Hangzhou Botanical Garden.

Running through November 28, the exhibition is co-hosted by 15 cities in the Yangtze River Delta region, including Shanghai and Nanjing and Suzhou cities in Jiangsu Province.

Categorized into three sections, the exhibition celebrates the long horticultural history of the chrysanthemum and encourages exchanges of expertise in cultivation and flower arranging.

The chrysanthemums are divided into two basic groups, woody plants and bloom varieties. They are mainly shown in the second and third sections.

The flowers can be used to create varied artistic forms, such as topiary, bonsai and cascades. At the riverbank of Yuquan Nanyuan area, about 1,200 pots of Xuanya chrysanthemums (悬崖菊) are placed, looking like small cascading waterfalls. 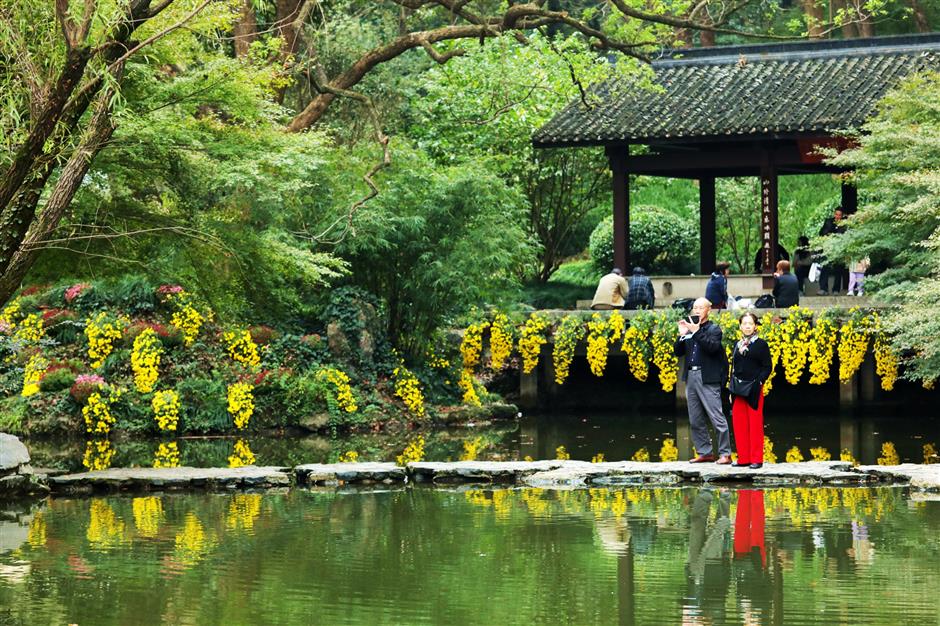 Visitors are surrounded by the blooming chrysanthemums at the Second Yangtze River Delta Chrysanthemum Exhibition in Hangzhou Botanic Garden.

Bloom styles are displayed at the exhibition by the way in which the ray and disk florets are arranged. In addition to common spider and pompom forms, visitors can view the rare and irregular inwardly curved one – involving a giant head in layers of curving ray florets that hang down to create a "skirt."

Chrysanthemums are one of the prettiest varieties of perennials that start blooming in early autumn in Hangzhou. Known as the favorite flower of November, ancient Chinese people eulogized its refined beauty in poems and inkwash paintings. It has been dubbed the "four gentlemen" in Chinese art for a millennium, along with the orchid, plum blossom and bamboo.

During the exhibition, the botanical garden will host lectures about the medical uses and cultivation of chrysanthemums in efforts to popularize the centuries-old culture among citizens.

In northern Zhejiang Province, farmers have been planting a chrysanthemum species widely used in herbal teas since the Southern Song Dynasty (1127-1279).

The small flowers are dried after plucking and generate a slightly aromatic flavor and sweet smell when brewed in hot water. Chrysanthemum tea can quench a person's inner heat, according to traditional Chinese medicine.

﻿
Special Reports
﻿
61761
,
61863
,
Explore the charm and romances of the West Lake
Celebrating the majesty of the Grand Canal
The hosts roll out the welcome mats. Where are the guests?
New corridor to promote tourism, environment
Greece ― a year-round holiday destination
Armchair excursions: touring the city without leaving home
A trip to yesteryear along Metro Line 16
Transportation gateway to Hangzhou's rich history
Metro Line 9, a gateway to Yuhang's many splendors
Walk back in time on Hangzhou Metro Line 7
EXPLORE SHINE