Metro Line 9, a gateway to Yuhang's many splendors 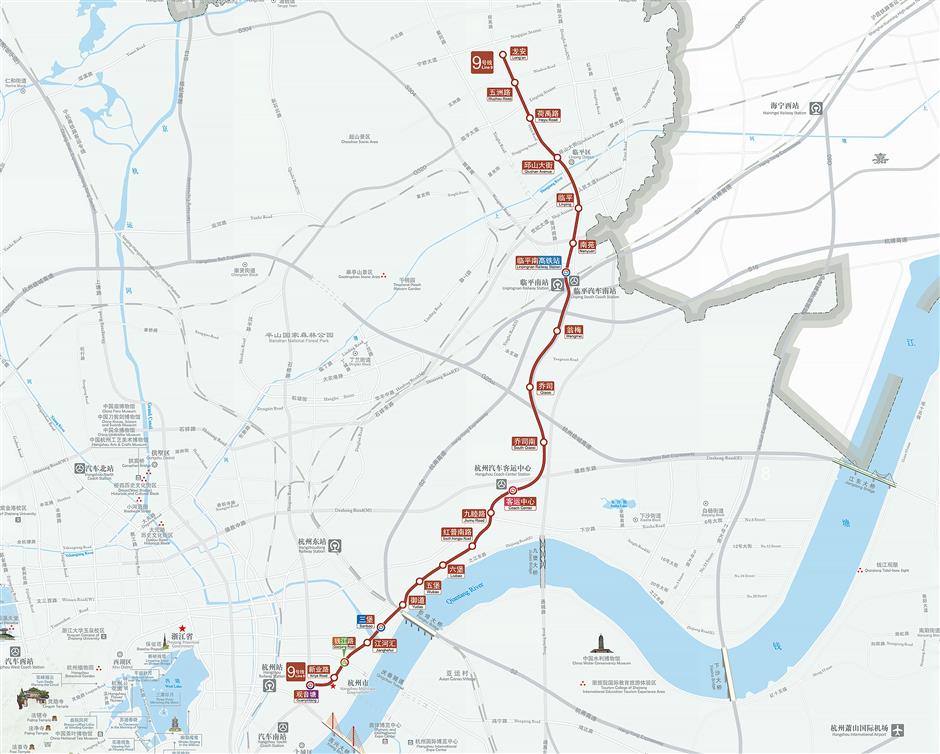 Since most sections of Metro Line 8 are still under construction, today we will skip it and run through Yuhang District via Metro Line 9.

For travelers, Yuhang District is a good weekend getaway, home to several scenic spots characterized by both its tasty food and unforgettable views.

Metro Line 9 links Yuhang and the central business district in the downtown area. You'd better take subway instead of driving if you want to avoid congested traffic along elevated roads.

Tangqi is an ancient town in the north of the city, which was established 1,000 years ago. The town took shape in the late Yuan Dynasty (1271-1368) when Zhang Shicheng, a rebellion leader from the area, widened the Grand Canal that runs through the town.

Historical buildings from the Ming (1368-1644) and Qing (1644-1911) dynasties can be found everywhere. The Guangji Bridge, built in the 15th century, is the only seven-arch bridge on the Grand Canal. It is listed as a UNESCO World Heritage Site.

Over the years, local authorities have attempted to revive the town's former splendor by restoring many of its old buildings and combing through remaining historical resources. Emperor Qianlong's engraved tablet was discovered here after being buried for centuries. 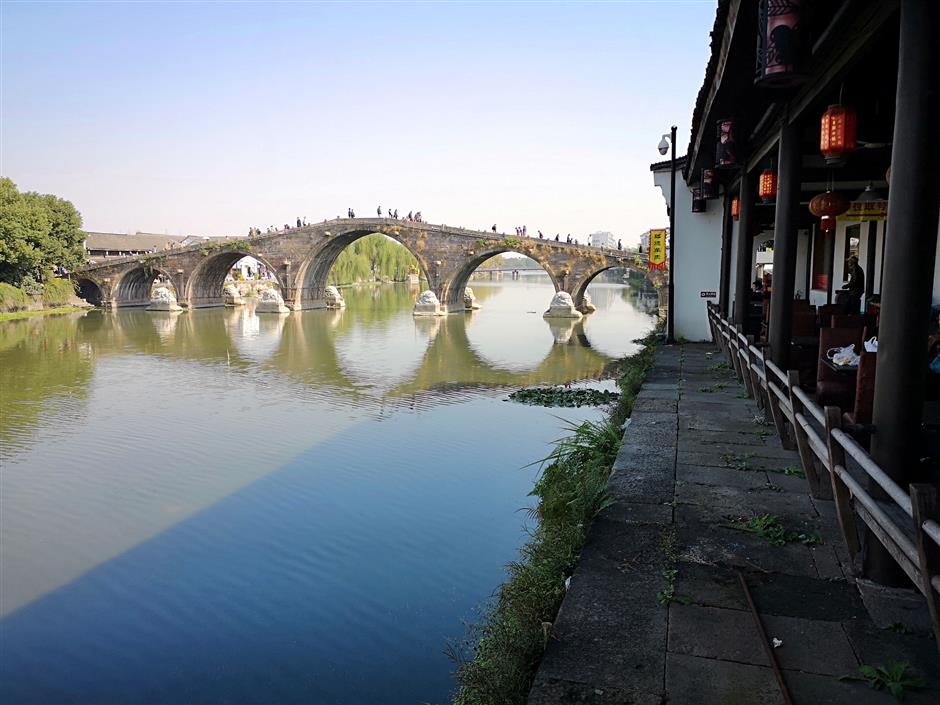 When Emperor Qianlong in the Qing Dynasty inspected Jiangsu, Zhejiang and Anhui provinces in 1751, he found only Zhejiang had not skimped on its grain deliveries to the imperial court. To reward Zhejiang residents and encourage other provinces to follow its example, the emperor exempted Zhejiang from a grain payment of 300,000 liang (11,190 kilograms). He had this edict engraved on a tablet for the public to view.

On weekends, throngs of Hangzhou locals flock to the town to purchase traditional Tangqi-style snacks, which have been popular for centuries. Bean crunch candy, walnut slices, sesame cake and loquat candy are among the best-selling delicacies.

During festivals, the town hangs hundreds of lanterns on the road to its main entrance and hosts many activities for visitors. Restaurants and food stalls lining the town's narrow streets serve dumplings, rice cakes, spring rolls and local delicacies.

In the upcoming days, the first batch of Tangqi loquats will be plucked. Tangqi has been a nationally acclaimed production area of loquat for many years. The most renowned local variety, Baisha, is sweeter than its counterparts and features thinner skin, as well as tighter and tenderer flesh.

During the annual May harvest season, people flock to local plantations to savor freshly plucked loquats. In traditional Chinese medicine, loquats are used for treating sore throats and cough, and the plant's leaves are an ingredient in loquat syrup.

How to get there: Get off at Long'an Station 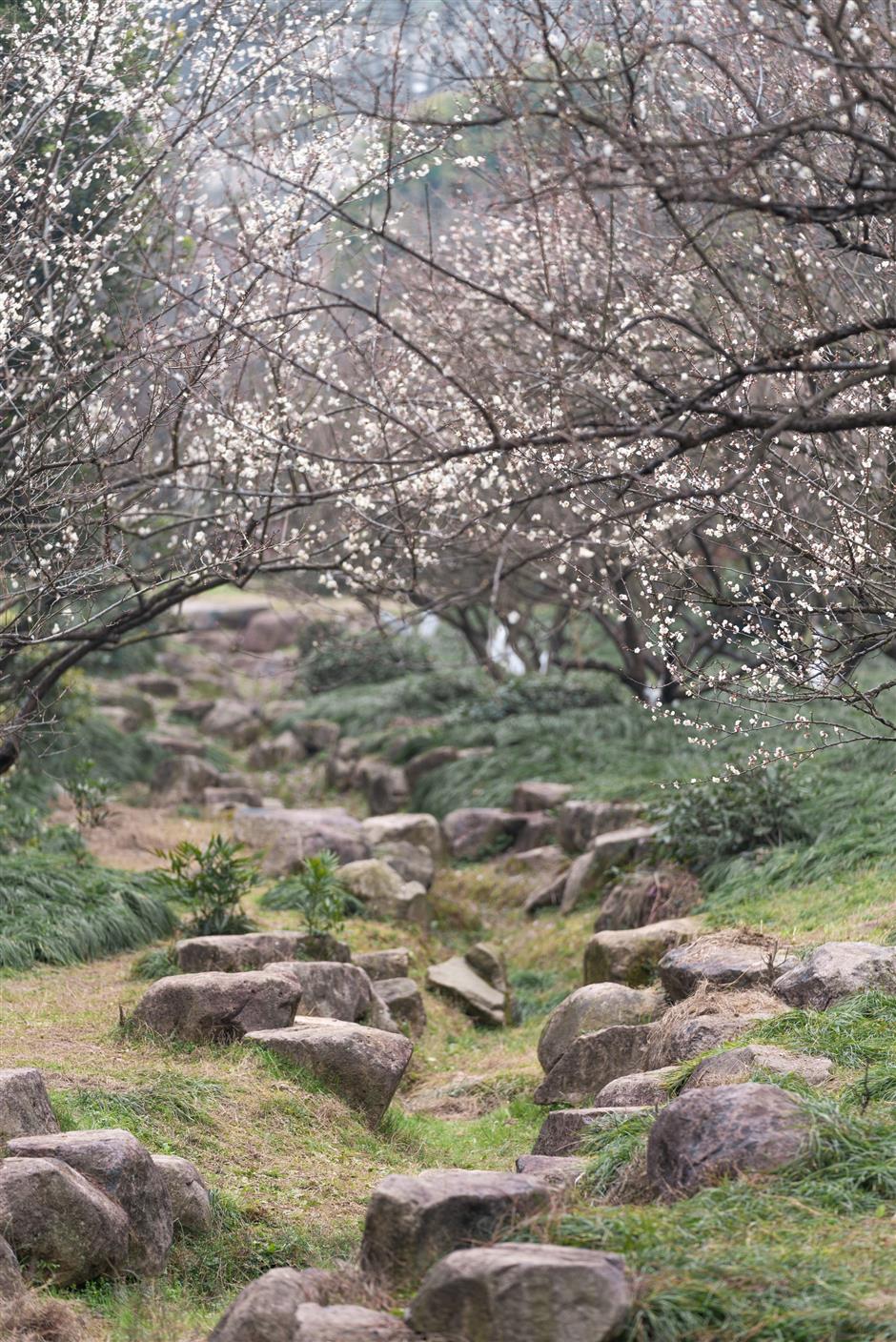 The plum trees are in full blossom on Chaoshan Mountain.

Chaoshan Mountain is one of the many places in Hangzhou with beautiful plum trees, but in unusually large quantities. Every spring, around 60,000 of the sweet-smelling white, yellow and pink flowering trees bloom on the mountain.

The scenic area has more than 200 varieties of these trees that bloom at different times, so the blossoms can be taken in for two months.

If you miss out on the blooming season on Chaoshan Mountain, you can visit Wu Changshuo Memorial Hall in the scenic area.

Modern artist Wu Changshuo described Chaoshan Mountain as a "fragrant white ocean." To Wu, the plum trees on the mountain were some of China's most beautiful scenery, a landscape he loved so much that his final wish was to be buried there.

In his eyes, the plum blossoms were a symbol of strength, resilience and perseverance, because they bloomed in winter, while other flowers didn't survive. The gnarled trunks and oddly shaped branches were commonly featured in his paintings.

The mountain may be far from the downtown area, but the beautiful scenery makes it a great place for hiking.

How to get there: Get off at Long'an Station