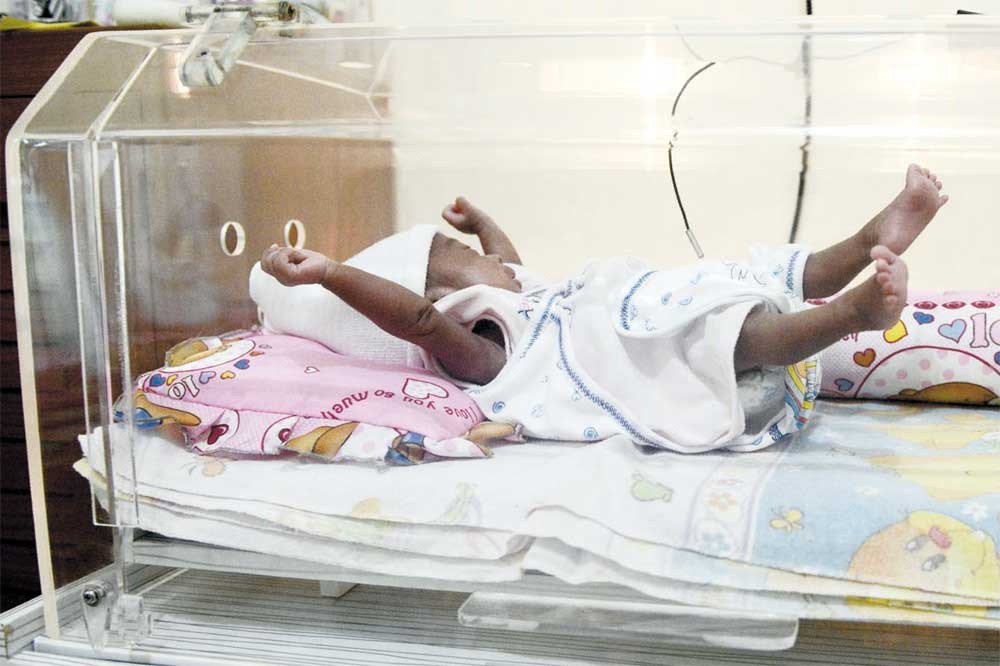 Maryamah Sudigyo, who was born prematurely, in an incubator in her home in Bogor, Indonesia. The country is benefiting from the pioneering work of an engineering professor who is building incubators and lending them for free to low-income families. — AFP

TINY Indonesian baby Maryamah stares around from inside an incubator, her bright eyes swivelling left and right from under a woollen hat that was far too big for her.

When she was born prematurely, Maryamah was just 1.2 kilograms, less than half the usual weight of a newborn in Indonesia.

Now safely back at home, she is still diminutive but nestles comfortably in a small incubator lent to family, who live in a poor neighbourhood in the city of Bogor on Java.

She is one of hundreds of premature babies born in Indonesia benefiting from the work of an engineering professor who is building incubators and lending them for free to low-income families in a bid to fill a gap in the healthcare system.

“The government has a program of public health insurance, but it cannot cover all the people,” said Raldi Artono Koestoer, who established the initiative.

Indonesia has the fifth greatest number of premature births of any nation in the world, at 675,700 a year, according to the World Health Organization. The WHO says that pre-term birth complications are the leading cause of death among children under five.

But getting access to the live-saving devices is a huge challenge for the millions living in poverty in Indonesia.

The public insurance scheme — introduced in 2014 — has helped as it sometimes covers the cost of incubators for a while.

But families unable to afford the high cost of continued care are often forced to take their newborns home early.

Koestoer, who works at the University of Indonesia just outside Jakarta, started his lending scheme back in 2012, using his technical expertise to design and build ultra-light, portable incubators.

His interest in incubators began when he fixed one of the devices for his elder brother, a pediatrician, and then learnt how to construct them himself.

To fund the scheme, he sought individuals willing to donate 3.5 million rupiah (US$260) each — the cost of making one incubator — and also to transport the devices to the homes of selected families. People who have signed up are generally middle-class professionals and include many in the healthcare sector.

People requiring an incubator send a text message to a special number, and if they are deemed in need, a volunteer brings one around for them.

The service began in Jakarta and has now expanded to an additional 48 cities, from the island of Sumatra in the west to the mountainous Papua region in the east.

As the service has grown, the professor has recruited two of his students to work with him, and he hopes to extend the initiative to 300 cities.

Koestoer, 62, says he has so far built 180 incubators that have helped about 1,500 babies, including twins and triplets.

The scheme has proved invaluable for Maryamah and her parents, Yulia Herawati and Prayogi, who like many Indonesians goes by one name.

Herawati underwent a caesarean section in February when she was almost eight months pregnant due to high blood pressure. Her baby was at first allowed to stay in a hospital incubator with the help of government insurance.

But after seven weeks, when the baby was still only 1.5 kilos, doctors said Maryamah could no longer stay in the hospital as her condition had stabilized, prompting her parents to launch a desperate search for help.

“We were slowly recovering from the shock of having a premature baby, but then we had another problem — how were we going to take care of her at home?” said Prayogi.

After asking around, he found out about the incubator lending service.

“I sent a text message and the response was very fast. After a few minutes the operator got in touch with me, and said that the incubator can be picked up as soon as the baby is at home,” he said.

Maryamah now weighs 2.4 kg and although she still spends a lot of time in the incubator, her parents now feel safe taking her out and playing with her.

While running the scheme is a big task, Koestoer says it all seems worth it when he meets the children he has helped.

“When a mother comes here with her baby and it is in good health, I’m the happiest man in the world,” he says.

﻿
Special Reports
﻿
TCM a key player in the war against COVID-19
More questions and answers about COVID-19
Highlights of the latest COVID-19 diagnosis and treatment scheme
Feeling low? Thwarting the epidemic blues
Hangzhou does its part to battle epidemic
Goodbye to pain. The skilled hands that relieve misery
How much do we really understand about our brains?
Protégés and mentors: Science research has 'a lot of work to do'
WWE trial targets next Chinese superstar.
Chen's rice experiments led nation's recovery
EXPLORE SHINE