Getting down with the sport of Brazilian Jiu-jitsu 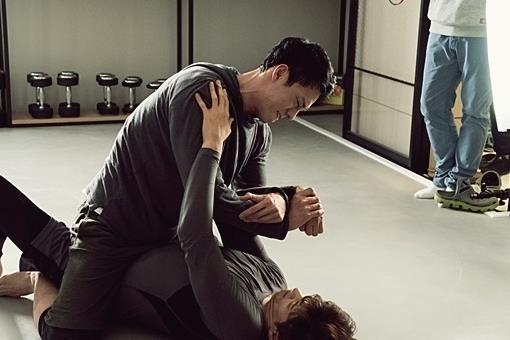 South Korean actors So Ji-Sub and Sung Hoon spar in Brazilian Jiu-jitsu in a popular drama “Oh My Venus.”

Like many people, my first encounter with Brazilian Jiu-jitsu was in a Korean drama. But the sport has become one of the most popular martial arts styles in recent years, thanks to its heart-pounding mix of grappling and ground fighting.

Inspired by Judo, the sport has a relatively short history. In 1914, Judo master named Mitsuyo Maeda (1878-1941) visited Brazil and stayed with a family surnamed Gracie. Maeda ended up teaching Judo to Gracie’s eldest son, Carlos. Then Carlos taught his siblings. However, the youngest and small-est son, Helio, felt disadvantaged when he practiced with his big brothers as many moves in Judo favor stronger and larger fighters. Thus, Helio refined and expanded on Maeda’s teach-ings that favored leverage over strength, focusing on fighting from one’s back on the ground. With time, this developed into a fighting style known as Brazilian Jiu-jitsu.

Judo, much like wrestling, focuses on grappling and throwing in the standing position. It is faster-paced and more aggressive than Brazilian Jiu-jitsu.

Practitioners can also improve their physical health through regular practice. Workouts will keep them in shape as they include grappling, wrestling, sparring and other strength-training and aerobic moves. The intensity may make practitioners gasp for air but gradually will build up their strength and endurance. And the practitioner’s heart will be strengthened as they shed unwanted fat as a bonus.

As a fun interactive sport, Brazilian Jiu-jitsu offers the prac-titioner a sense of satisfaction when tapping opponents out. Regular practice allows people to gain more self-confidence while their memory will be improved as they learn hundreds of moves. With time, the brain will also work to help the practitioner to overcome their opponent.

In total, there are eight colored belts in the ranking system of Brazilian Jiu-jitsu. The highest is the red belt.

This is the first belt. During the white-belt stage, you will learn basic knowledge of offensive moves such as submission and guard passes. But many instructors will teach escapes and defensive positioning to novices as they will often train with more experienced practitioners. Remember, these basics are the foundation to all harder moves.

A practitioner is required to remain a black belt for a minimum of 31 years by the IBJJF. It is the high-est common belt in BJJ, and signifies an expert level of technical and practical skills has been achieved.

A practitioner is required to remain a blue belt for a minimum of two years by the International Brazilian Jiu-Jitsu Federation (IBJJF). At the second adult rank, you will learn a large number of techniques, plus experience hundreds of hours on the mat to put theory into practice. You have to be at least 16 to receive a blue belt, required by IBJJF.

A practitioner is required to remain a black/red belt for a minimum of seven years by the IBJJF. Similar to Judo, a black belted BJJ practitioner reach-ing the seventh degree, they will be awarded an alternating black and red belt, also known as the coral belt.

A practitioner is required to remain a purple belt for a minimum of 1.5 years by the IBJJF. A purple belt is an intermediate rank. At this stage, you will gain knowledge about the sport and are qualified to help instruct lower-ranked practitioners. Although you have to remain a blue belt for at least two years, the requirements differ for those graduating directly from the youth belts.

A practitioner is required to remain a brown belt for a minimum of one year by the IBJJF. Typically, it requires at least five years of training in BJJ to receive a brown belt, which is the highest ranking color belt apart from the exceptional belts award-ed at the highest levels. You will learn to refine and polish your techniques at this stage.

A practitioner is required to remain a red/white belt for a minimum of 10 years by the IBJJF. Recently updated by the federation, a practitioner who has achieved the rank of eighth degree black belt will receive a red and white belt.

If a practitioner receives a black belt at 19, the earliest they could receive a ninth degree red belt would be at age 67. It is the highest rank that can be awarded to a living practitioner of BJJ.

Q: What is the biggest difference between Brazilian Jiu-jitsu and other martial arts?

A: Brazilian Jiu-jitsu favors superior techniques and leverage as speed and strength don’t matter much when you’re on your back.

A: Yes. Brazilian Jiu-jitsu can increase not only your core strength and muscle tone, it can improve your balance, car-diovascular capacity and muscular endurance and reduce your body fat.

Q: Who can learn Brazilian Jiu-jitsu?

A: Literally anybody, as the core principle of Brazilian Jiu-jitsu is to provide a method for smaller, weaker individuals to protect themselves from bigger and stronger ‘attackers.’

Q: What should I pay attention to during practice?

A: Always be careful and concentrated on what you and others are doing. Carelessness will cause unnecessary injury.

Q: What should I wear for my first class?

A: A comfy T-shirt and shorts will be best.

﻿
Special Reports
ADVERTISEMENT
TCM a key player in the war against COVID-19
More questions and answers about COVID-19
Highlights of the latest COVID-19 diagnosis and treatment scheme
Feeling low? Thwarting the epidemic blues
Hangzhou does its part to battle epidemic
Goodbye to pain. The skilled hands that relieve misery
How much do we really understand about our brains?
Protégés and mentors: Science research has 'a lot of work to do'
WWE trial targets next Chinese superstar.
Chen's rice experiments led nation's recovery
EXPLORE SHINE