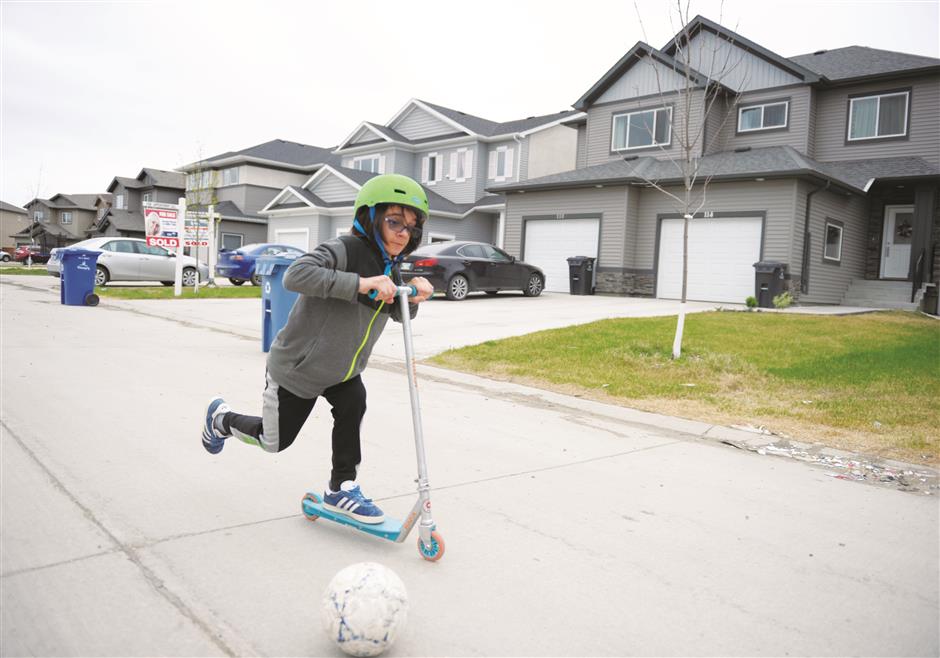 Julien Ferrer rides his scooter on a street in Winnipeg, Canada, Born in France, Ferrer’s family moved to Winnipeg to experiment with a cure for hypophosphatasia.

At birth, doctors gave Julien Ferrer only a slim chance of surviving a rare childhood bone disease. Fifteen years on, the French teen is living a normal life in Canada, where he received cutting-edge treatment — and new hope for the future.

Julien was born in 2002 in Perpignan, in southern France. Right away, his parents Melanie and John Ferrer said they noticed some issues.

“He was a little baby, average in most ways. But he wasn’t growing well, ate very little and cried a lot,” his mother recalled.

A first series of X-rays showed his tiny infant bones were “translucent” and he lacked muscle mass, she said. His original doctors did not know what to make of it.

But specialists later determined he was suffering from a genetic disorder called hypophosphatasia (HPP), which is characterized by abnormal bone development.

The disease is caused by an inability to absorb minerals like calcium or phosphorus — meaning a person’s bones are fragile. At the time, there were only eight known cases in France. Doctors gave Julien little chance of survival.

His distraught parents scoured the Internet for information, which Melanie said “was the worst thing to do” because the medical websites they visited said most cases for infants under the age of 18 months ended in death. In subsequent years, the Ferrers did all they could to meet Julien’s special needs while trying to ensure he could play with children his own age — even if he needed a wheelchair to get around.

They reached out to others with similar ailments, and launched an association to fund hypophosphatasia research. They even helped organize the world’s first international symposium on the disorder in 2008. But then, a turning point: Canadian researchers attending the conference announce they are launching a clinical trial for a new treatment. And a few weeks later, they offer Julien a place in the trial in Winnipeg.

“I was speechless, and didn’t know what to think,” recalled John.

Days before Christmas in 2009, the Ferrers packed their bags and flew to Canada.

In Winnipeg, they were welcomed by Cheryl Greenberg, a geneticist at the University of Manitoba who was leading the study. Manitoba province has the largest concentration of cases of hypophosphatasia in the world, afflicting mainly descendants of German Mennonites who settled in the vast Canadian prairies more than a century ago, at a rate of one in 25,000 — four times the global average.

Julien received his first treatment at the Winnipeg Children’s Hospital in January 2010, when he was 7 years old.

“By Easter, he was walking,” said his mother, her eyes wide with astonishment as she recalled the quick transformation.

In 2012, the Ferrers decided to immigrate to Canada. The couple bought a house in the suburbs of Winnipeg and both got jobs at the French-language Saint Boniface University in the city’s historic French quarter.

Julien, now 15, is healthy and active. Like other teenagers, he dreams of the future, with hopes for a career either in the theater or video game design.

“I like creating things, stories or characters,” said the teenager, who appears unperturbed by the three injections of medication a week he must still receive as part of his ongoing treatment.

“He has a severe form of HPP,” said Greenberg. “But he responded beautifully to the treatment, such that his bones now look almost normal, and he’s able to live a pretty normal life.”

The experimental drug Julien takes was authorized for sale in Canada at the end of 2017 and has been covered by his French government health plan since January this year.