Goodbye to pain. The skilled hands that relieve misery

Dr Sun Wuquan’s consulting room is suffused with the atmosphere of a massage salon.

Several patients lie face down on gurneys with “face holes” in one end for breathing. Sun works on their backs with bare hands.

“How does it feel? Does it burn? Is it painful?” Sun is constantly seeking feedback from patients and adjusting his manipulation accordingly. 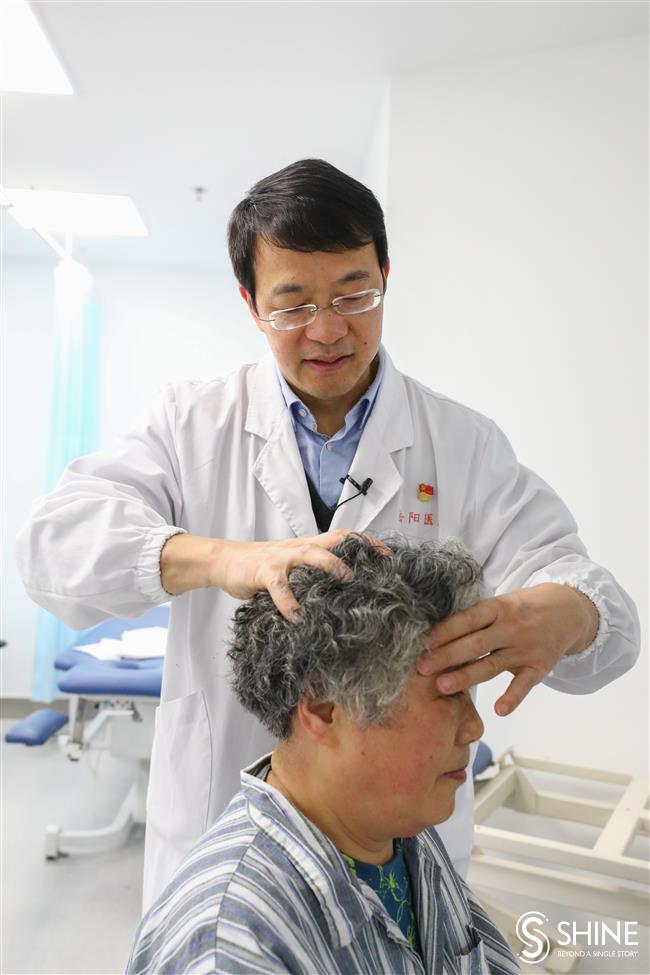 Drawing on years of practice, Sun Wuquan treats a patient in pain.

A doctor and researcher for 30 years at the Yueyang Hospital of Integrated Traditional Chinese and Western Medicine, Sun prefers to use the Chinese term tuina instead of the more common “massage” to define his job.

Tuina, he explains, is a method of treatment, whereas massage is more about fitness. Tui means to push, while na means to lift and squeeze.

This traditional Chinese treatment traces its origin back thousands of years, like fire cupping and acupuncture.

“We are not like the doctors who fight against death every day,” says the director of the hospital’s tuina department. “But each year, we treat more than 120,000 people to relieve their pain and improve the quality of their lives. I feel proud about that.”

The road to becoming a tuina practitioner is long and winding. For Sun, the process began when he was a child.

He says he suffered for years from a poor constitution and constant illness after falling into a well when he was 2 years old and living in Anhui Province. While his mother took him to traditional Chinese medicine doctors, his father forced him to do physical exercises to improve his stamina.

“I remember when I was going to apply for college, my parents said that they hoped I would study something that helps my health,” he says. “That was part of the reason why I chose tuina as my major.”

It is harder than you might expect to become a qualified tuina doctor, according to Sun. Both body and soul need to be in harmony to study the manipulation techniques.

The process included a year’s practice of “Yijin Jing” and neigong, which appear frequently in kung fu novels as magical and powerful martial arts. In fact, they are two sets of qigong practice that help build a strong, flexible body and a tranquil, focused mind.

“I remember my hands always suffered from chilblains before I went to college,” he says. “And after a year’s practice, that never happened again.”

One of the key skills in “Yijin Jing” is regular, natural breathing under all circumstances.

“Most people when they put forth great effort naturally hold their breath,” Sun says. “But we can’t do that. The result of holding one’s breath while doing tuina just hurts ourselves.”

Manipulation practice started with a bag of rice, which Sun uses today to guide students. The rice is put in a white cloth bag with a rope securing the opening. It can be adjusted for “hardness” to simulate different muscle structures.

There are several basic tuina movements that Sun often uses on patients: gun, which means to press the back of one’s hand on a painful spot and roll over it quickly; ca, which involves rubbing with one’s palm quickly and repeatedly; and rou, which imprints the tip of a finger on a spot and presses it repeatedly.

“We use the strength of our shoulders and arms and wrists, not just our hands,” he explains. 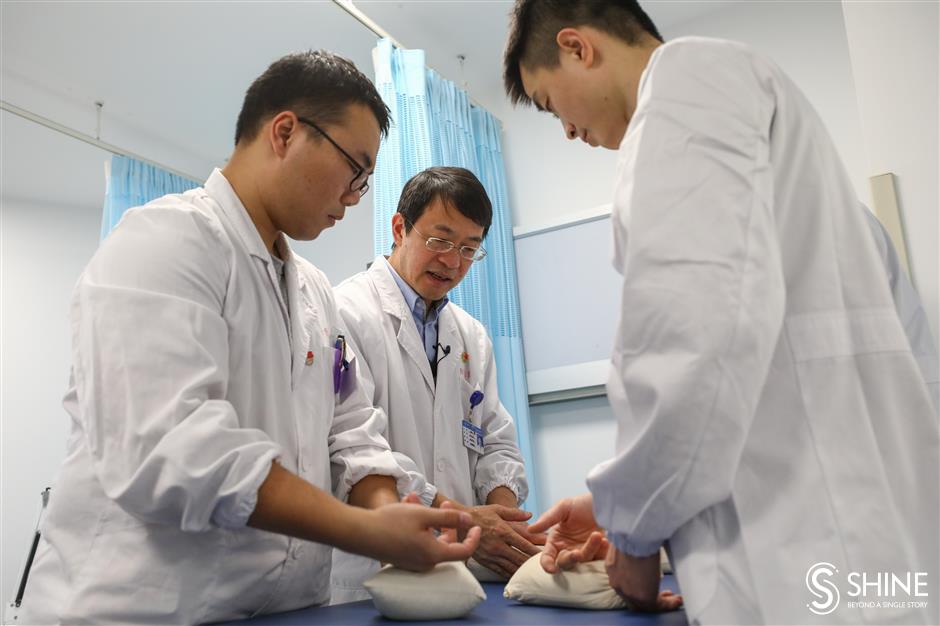 Bags of rice are a traditional tool in teaching muscle manipulation.

Apart from his mentors, patients are actually his best teachers. People who receive long-term tuina treatment know a good manipulation better than anyone.

“Many patients believe in only one experienced doctor,” he says. “If you take over half way through treatment, they will tell you how yours feels differently and what you need to do to make them feel as good as before.”

Unlike medicines and injections, the success of tuina takes time. It is common for patients to receive hours of treatment — even one session lasting for days — in order to relieve their symptoms.

He remembers one of his patients, a woman in her 70s, who was suffering from lumbar spinal stenosis. She lived in a shikumen (stone-gate) complex and had to walk half a kilometer to a bathroom at the end of her old lane. Her distorted lumbar spinal canal pressed on her nerves, causing constant pain in the waist and legs.

“She needed to stop and rest three times on the way to the bathroom,” Sun says. “And she took a lot of medicine and injections before she finally came to me.”

After treatment, the woman was able to walk smoothly and without pain, he says.

Sun’s field of interest goes beyond spinal and muscular treatment.

“A tuina master in Shanghai, who once worked in Tibet, discovered that tuina could help relieve altitude sickness,” Sun recalls. “So we carried out research on its effect on coronary heart disease. At that time, when medical science was less advanced and we found tuina actually helped a lot of people.”

The experience inspired Sun to do further study to determine if manipulation could work on more diseases. Now, apart from common spinal, muscular and joint problems, tuina is also used to treat — usually as an auxiliary therapy — respiratory systems, pediatric problems and gynecological disorders.

Sun and his colleagues are trying to develop standards for tuina manipulations, though it’s no easy task.

“It is hard to quantify something like this,” he explains. “Our current guide on tuina is like ‘you should move your hand not too fast, not too slowly, not too fiercely and not too lightly.’ You have to discern what that means through endless hours of practice, because no one can tell what is too fast or slow.”

He adds: “Now we are trying to develop standards, like one should perform 120 rubs within a minute. The conclusions are based on numerous experiments, including such factors as how the frequency of a movement affects blood flow volume.”

Sun says that he had about 50 classmates in college, but now fewer than 20 of them are still practicing in tuina. But Sun says he has never thought about switching to another job.

Because of his perseverance and contributions, Sun was the only traditional Chinese medicine doctor to win a “Shanghai Standouts” award last year. The awards are given out by the Shanghai General Trade Union to honor excellence in the workplace.

Sun says he hopes to be able to work with foreign doctors to promote tuina treatment, but that’s another challenging road ahead.

“Tuina is regarded as a type of alternative medicine in Western countries,” he says. “We have sent doctors overseas to work with doctors, and I believe we will see more cooperative efforts in the future.”

﻿
Special Reports
﻿
61825
,
61875
,
Survival of the fittest: an industry in the throes of recovery
Fitness industry bent into new shape after epidemic
School's back, but this time the return is a challenge of sorts
Cleansing vital to prevent eyelash mites
Special lenses help short-sighted children
Increase in number of patients with dry eye
Online resources help minds, bodies stay fit amid confinement
Chinese medicine: defenders and doubters
Zhejiang medics back home after heroic efforts in Hubei
TCM a key player in the war against COVID-19
EXPLORE SHINE