Wu Pinglu, director of the respiratory department at a traditional medicine hospital and a member of the COVID-19 expert team in Xianning, Hubei Province, conducts acupuncture on a patient.

Feeling anxious amid the novel coronavirus outbreak, she turned to friends in China for help. They put her in touch with traditional Chinese medicine doctors who had been treating COVID-19 patients since the end of January.

Free of charge, the doctors wrote out individualized prescriptions – different for each member of the family – and instructed them how to use acupoint massage until their package of herbal medicine arrived.

The family of four recovered.

“I’m Chinese Singaporean and grew up drinking herbal soups and mixtures, but it was not something I turned to for a quick remedy,” Pigeon told Shanghai Daily. “Seeing the quick effects of the traditional medicine came as a surprise to me.”

Traditional Chinese medicine supplier Herba Sinica, based near Nuremberg in Germany since 1996, has been working overtime since the end of February filling out orders for Chinese herbs.

Similar orders are flooding into Chinese herbal stores around the world as people grasp at straws for treatment of a virus that has yet no known proven therapy. Most clients are local Asians, but the number of those trying traditional medicine for the first time is on the rise.

Herba Sinica founder Zhong Wenjun, who has a doctorate in plant nutrition, is connecting TCM doctors with the Munich-based International Society for Chinese Medicine, founded by Professor Manfred Porkert in 1978.

“I hope that by connecting the doctors, we can find ways to help those in need overseas, especially those unable to get into a hospital,” Zhong said.

“If we use the metaphor of defending a city to the case of fighting the novel coronavirus, traditional Chinese medicine is to build up your wall to defend against it,” he explained. “No matter who the enemy is and how strong they are, your wall is your defense line. Western medicine seeks to identify the enemy and attack accordingly. In the case of COVID-19, the enemy is still not fully known to us.”

Half of the world is now home-bound due to the pandemic. Many with mild symptoms are unable to get into overwhelmed hospitals or, in some countries, to even get a coronavirus test. In many countries, health-care systems are treating only the most serious cases.

Doctors and researchers remain puzzled why some patients deteriorate more quickly than others. Many people like Pigeon, who show mild symptoms, become anxious because they aren’t sure whether they will recover at home.

Chinese front-line doctors in the fight against the pandemic are sought out by peers overseas to share their experience via video conferences. Free digital handbooks on prevention and treatment of the novel coronavirus by Chinese doctors have also been translated into many languages.

Chinese Internet giants like Alibaba and JD.com have initiated multilingual tele-medicine platforms to connect Chinese doctors with patients overseas. According to JD.com, its platform, launched on March 17, was visited more than 5 million times in the first 10 days. It evoked more than 100,000 inquiries – 5,000 on the English version.

The Chinese experience has encountered resistance due to bias and other factors. Foreign media have reported how some patients of Chinese ethnicity, including the first New Jersey patient, had to fight with their doctors to refer them to Chinese advice on treating the disease.

The official Chinese guidelines on COVID-19 also include TCM methods, which are little understood and generally dismissed by Western medical establishments.

Even in China, traditional medicine had its doubters where novel coronavirus is concerned.

Many young Chinese consider herbal treatments to be slow-working and only health supplements at best.

Wu Pinglu, director of the respiratory department at a traditional medicine hospital and a member of the COVID-19 expert team in the city of Xianning in hard-hit Hubei Province, told Shanghai Daily through an assistant that foreign patients simply don’t know how traditional Chinese medicine can help them.

“We desperately want to contribute to ending the global pandemic, but it is very difficult to have our voice heard,” Wu said.

Wu comes from a family of four generations of traditional Chinese medicine practitioners and chose to follow in their footsteps after graduating in Western medicine. He has founded the group Tang Po Xue, which communicated with Paris-based Pigeon via tele-medicine.

The name means “like thawing snow with hot water,” which describes how effectively traditional medicine can treat disease if used accurately. The group comprises about 10 doctors from various hospitals, along with many volunteers.

In addition to their hospital duties, the team of doctors has been trying to help COVID-19 patients since late January, free of charge and many by remote diagnosis. The group said it had treated 491 patients in China by the end of February. Of those all but 56 who didn’t get their deliveries of medicines beat the virus.

The group now wants to help other heavily hit areas. Using a combination of acupuncture and herbal remedies, they are finding ways to reach overseas patients. 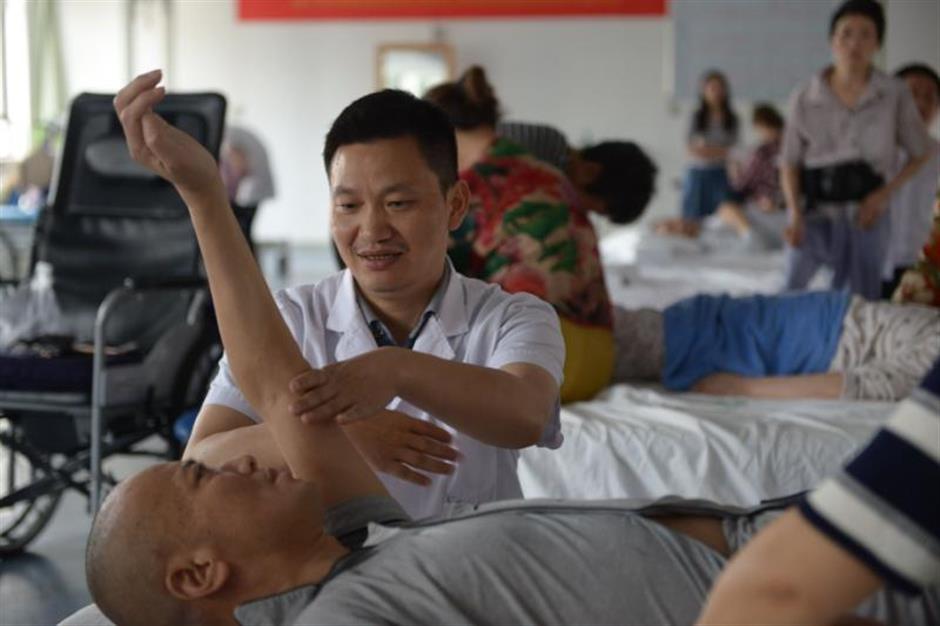 Doctors from Tang Po Xue can help tele-medicine in English via WeChat (tangpoxue095) or Skype (tangpoxue@126.com).

Wu gives some general tips for those suffering mild symptoms: Avoid chicken if you are coughing, eat Chinese dates for diarrhea and refrain from sex life when taking traditional medicines.

“The essence of traditional Chinese medicine is individualized prescriptions,” Wu said. “That’s difficult to apply on a large scale in the situation of pandemic, so some common prescriptions with differences for individuals and easy-to-learn acupoint message can help effectively and quickly.”

He added, “We have also modified prescriptions using substitutes for ingredients unavailable in some countries. There’s often a delay in packages arriving. In the meantime, patients can easily learn acupoint message, which has proven effective in relieving the symptoms until their medicine arrives or they gain access to an acupuncture practitioner.”

While Chinese sources teem with articles about the use of traditional medicine in treating symptoms of novel coronavirus, there has been little professional discussion in the West on the subject since the outbreak of the new virus.

There is no cure yet, Western or Chinese medicine, as the esteemed British medical journal Lancet paraphrased in March the World Health Organization as saying: “WHO has made it clear that there are currently no known effective treatments for COVID-19... Care should be taken to not give patients drugs of unknown efficacy. Clinical trials are urgently required in this context.”

Special Reports
ADVERTISEMENT
61922
,
61928
,
Chinese medicine: defenders and doubters
Zhejiang medics back home after heroic efforts in Hubei
TCM a key player in the war against COVID-19
More questions and answers about COVID-19
Highlights of the latest COVID-19 diagnosis and treatment scheme
Feeling low? Thwarting the epidemic blues
Hangzhou does its part to battle epidemic
Goodbye to pain. The skilled hands that relieve misery
How much do we really understand about our brains?
Protégés and mentors: Science research has 'a lot of work to do'
EXPLORE SHINE