The Bible says: “The eye is the lamp of the body.” Ophthalmologist Li Wensheng’s job is to keep the lamp lit for people who are at risk of losing their sight.

“Being an all-rounder is actually what patients need,” Li says of his multiple skills.

Born in southwest China’s Yunnan Province, Li says he didn’t expect to become an eye doctor when he was young. He wanted to be a zoologist, then a botanist. But as fate unfolded, he eventually went to medical school.

“Even then, I wanted to be a researcher rather than a clinical doctor,” he says. “I didn’t change my mind until the last year at medical school, when I interned in a hospital. I remember holding a patient’s medical record in my hands, and suddenly it all felt so familiar and right.” 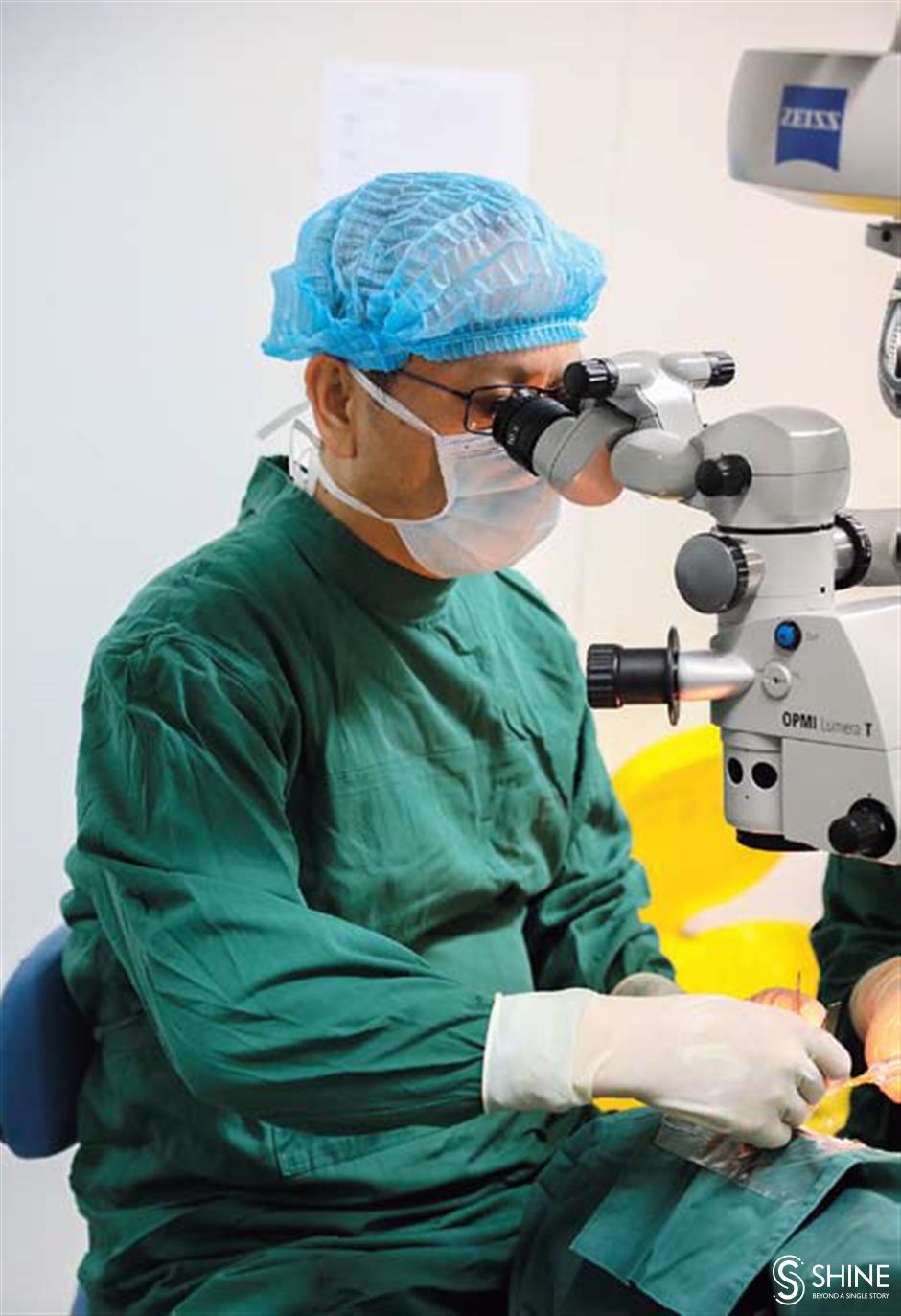 Li Wensheng is skilled in a variety of eye surgeries.

Li chose cataract surgery as his first field because it is a major cause of blindness in the world. But as time went on, Li found that cataract surgery doesn’t always solve patient problems once and for all.

“Some people suffer from both cataract and ‘old eye’ problems, and they expect that cataract surgery will restore their sight as good as new,” he says. “But when they discover that’s not the case, they become depressed.”

Such cases inspired Li to become skilled in more types of eye surgeries, including those that affect the very aged. To date, he had done four surgeries on seniors 102 years or older.

The first such surgery occurred in 2008, when a man came to him asking if he would perform cataract surgery on his father, a centenarian.

“The family, including the old man himself, wanted to have some quality in the last years of his life,” Li says, “but no other hospital was willing to do the surgery because of the high risks at his age. Anesthesia alone posed a risk.”

Li’s surgery, after careful planning, was successful, and the patient lived for several more years.

Li came to firmly believe that no surgery is “unnecessary” if it can improve life quality, though some surgeries are medically optional.

Take “floaters” for example. Those are spots in vision that may look like dark specks, strings or “cobwebs” that drift about when a person moves his eyes, then appear to dart away when the person tries to look at them directly.

Most eye floaters are caused by age-related changes that occur as the jelly-like substance called vitreous inside the eyes becomes more liquid.

“Ignore them, don’t let your eyes get too strained and you won’t be affected by them at all,” Li would usually tell his patients.

But then he encountered a young man from neighboring Jiangsu Province who just couldn’t follow that advice. He developed a severe obsessive-compulsive disorder about the floaters and considered suicide so he wouldn’t have to live with the condition.

“What could I do?” Li says. “I had to do what I thought an unnecessary surgery for him. But if it eliminated his suicidal thoughts and improved his mental health, it wasn’t so unnecessary.”

Li says that his biggest challenge so far was finding improvements in anesthesia methods for eye operations. About two decades ago, Li witnessed an accident, when an anesthesiologist’s needle caused an eyeball to atrophy.

“At that time, I thought anesthesia was too risky and there should be a better way,” Li says.

After years of study and research, Li developed a new “two-step” anesthesia that could be used on 95 percent of eye surgeries. In the first step, the anesthetic is focused on the surface of the eyeball. The second step is an anesthetic administered by lifting the skin covering the sclera, or white of the eye.

“When the skin is lifted, the anesthetist can clearly see the needle and the risk of penetration is reduced,” he says. “What’s more, the patient doesn’t feel the pain of penetration anymore.”

Although the pain of anesthesia is bearable, Li says he believes a doctor’s duty to reduce pain as much as possible.

“It’s a doctor’s creed: to cure sometimes, to relieve often, to comfort always,” he says. “I think that is what we doctors should always bear in mind.”

Li says the most essential quality of an ophthalmologist is absolute confidence, which he calls a kind of gift.

“The pressure of doing an eye operation is beyond imagination because eyesight directly impacts a patient’s life quality, and hesitation or fear during surgery can cause irredeemable harm,” he says.

Li says the most difficult operations are those done on patients with one blind eye and a disease that threatens the sight of the other.

“Such operations exert great mental pressure because you know you are dealing with something where you can’t fail and you are the patient’s last hope,” Li says.

“When you are in the operating theater, you have to be very decisive and not let anything distract you.”