On the Front Line
Shot by Ma Xuefeng and Dai Qian. Edited by Dai Qian. Subtitles by Wang Xinzhou and Andy Boreham. 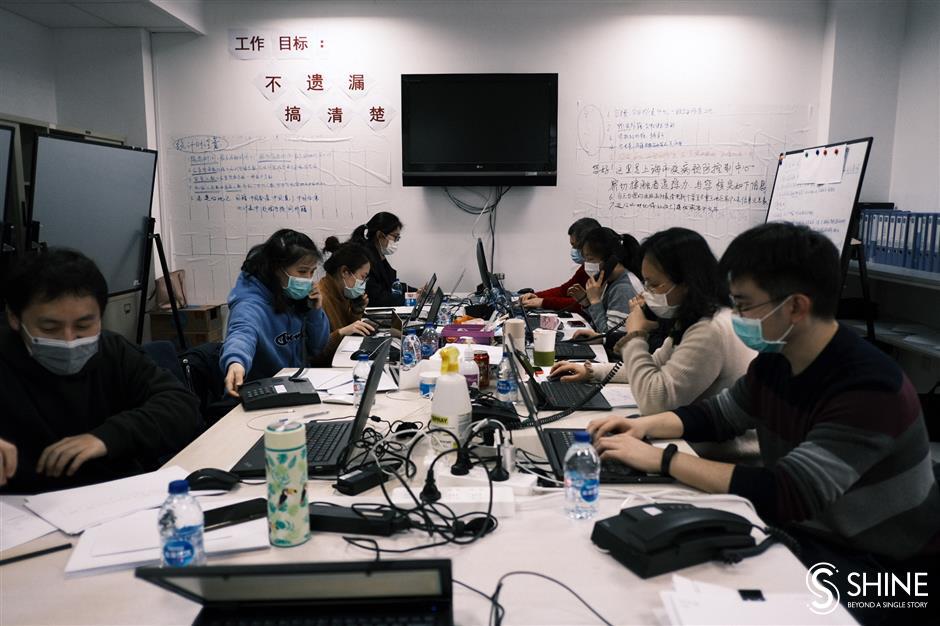 For nearly two months, three teams of 10 at Shanghai’s Center for Disease Control and Prevention have been working 24-hour shifts.

The procedure for tracking the movements of people infected or potentially infected by the novel coronavirus (COVID-19) reads like a detective novel.

The sleuths in this case are more than 700 medical professionals from Shanghai’s Center for Disease Control and Prevention. There is only one suspect — the highly contagious and sometimes fatal COVID-19 virus.

Theirs is a race against time to try to prevent the virus from spreading. Every case must produce a preliminary report within the first 24 hours.

Of the 353 confirmed coronavirus cases in Shanghai, one-third were identified through close contacts with other patients. That has involved nearly 3,000 investigations into the nearly 12,000 close contacts of existing patients. Most have since recovered and been discharged from hospital.

“Epidemiology investigations and contact tracking have been essential in Shanghai’s efforts to find potential cases, interrupt the transmission cycle and protect city residents,” said Yuan Dong, who is in charge of the office that handles close contact tracking and management.

“Our ultimate goal is not to target individuals, but to protect those at risks of getting infected,” he told Shanghai Daily. “Tracking them down is the means to provide them with the best health services, including medical observation, advice on quarantine and treatment if needed.”

Next door to Yuan’s office, a team of 10 people is collating the information that pours into the center. For nearly two months, three teams of 10 have been working 24-hour shifts.

Another 700-plus "medical detectives" have been interviewing patients and conducting on-site investigations to figure out where and how each patient might have become infected and to whom the virus may have been passed.

“We are grateful for all the Shanghai residents who have helped with our investigations in the past two months,” said Yu Xiao, an epidemiological investigator. “We hope everyone continues to support us so we can all protect our loved ones and build an ‘iron wall’ around our city.”

She remembers her first investigation, which occurred when an office worker infected co-workers. 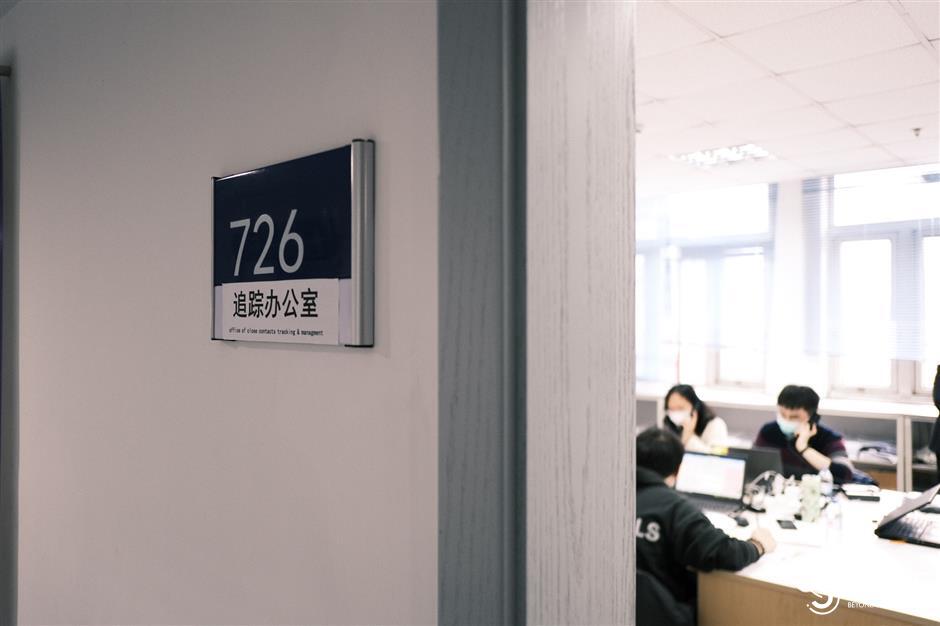 The office where the sleuths work day and night tracking the movements of people infected or potentially infected by COVID-19.

On site at the company, Yu and her colleagues reconstructed his entire “activity map” — from entering to leaving the office. They analyzed the seating arrangement, the dining options and other details before isolating five close contacts.

Investigators must cope with vague memories and sometimes lies. An interview can take at least four hours as investigators trace a person’s every step in the 14 days prior to showing symptoms and beyond.

Some people are nervous during the questioning, while others may be reluctant to open up the details of their private lives. Investigators often need to be patient to wheedle out the information they need. They also need to be adept at spotting liars.

In one case, an interviewee who had been out shopping with his mistress was afraid his wife might find out. In another, a man was reluctant to reveal that he had been playing mahjong at an unlicensed venue.

Investigators have also found it hard sometimes to convince people they phone that it’s not a hoax call.

“I just got cursed at on the phone,” murmured Liu Lan, who tracts infection contacts, as he ended a call. “I used to run into a lot of anger on the other end of the line but that’s becoming rarer.”

Before he could barely finish his words, another call came in. It was an interviewee calling back with concerns about the health of himself and his family. Liu guided the caller to the appropriate public health service.

Like many members of the team, Liu volunteered for the job from another department in the center.

“I wanted to help the center protect our city as much as I could,” he said.

Their work hasn’t been in vain. Confirmed and suspected cases are dropping sharply in Shanghai, with recoveries rising.

“Shanghai has almost no local cases,” said Zhang Fang, who is in charge of coordination with other departments and centers for disease control and prevention in other cities. “Currently our main focus is on cases coming in from overseas.”

Despite airline cancellations, Shanghai’s two airports still greet between 100 and 300 international flights a day, some from places where the virus is still on the rise. 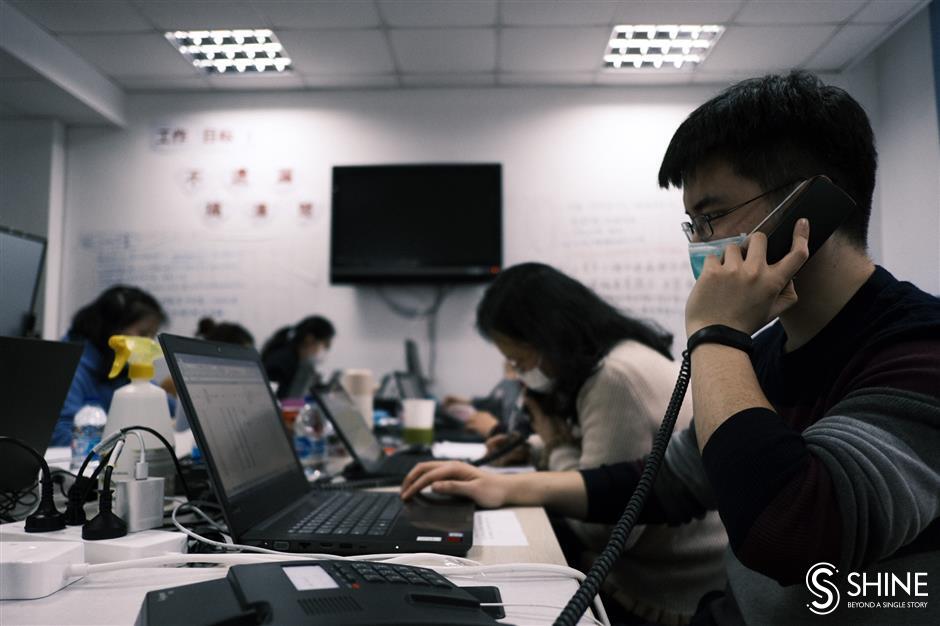 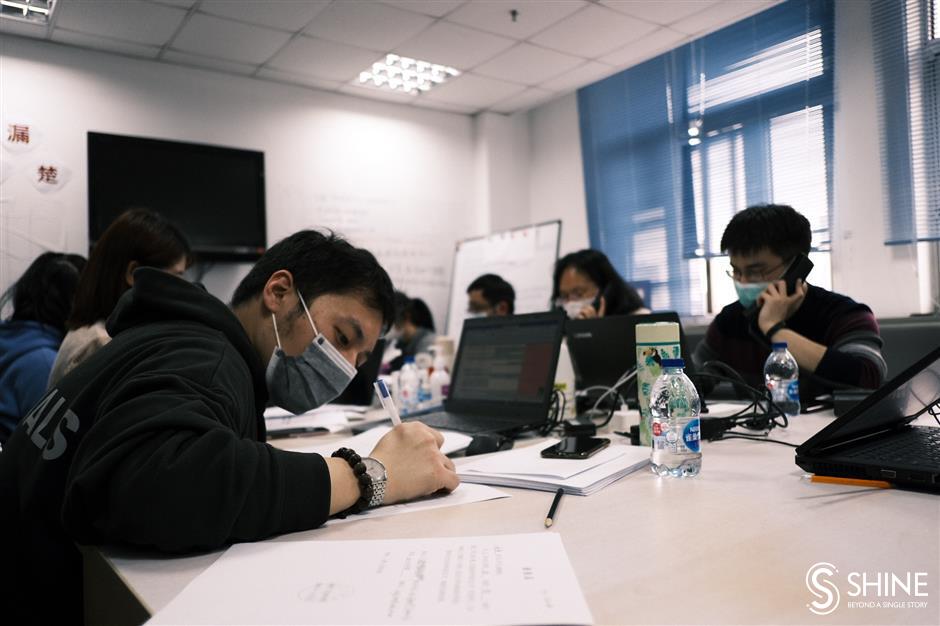 As of midday Sunday, the city reported 15 imported cases.

One flight on Friday reactivated concerns among city’s residents after they were relieved to see cases dropping sharply for a few days.

The flight from Frankfurt had four passengers who showed fever and another two who reportedly took cold medicine to try to stifle symptoms. They all were sent straight to designated medical institutions. Other passengers and crew members were put in 14-day quarantine.

It has been less than two weeks since Shanghai first reported an imported case. Zhang remembers it clearly.

It all started with a call for assistance from another province. A person who arrived at Pudong International Airport on February 20 and showed no symptoms had returned to his hometown in another province two days later. There, he was diagnosed with novel coronavirus.

“It was a very complex case because the passenger was particularly active while he was in Shanghai,” Zhang recalled. “He went shopping in supermarkets three times, went out to eat, took cabs and bought a new phone card. Luckily, he was very cooperative and had a pretty good memory of his movements. But inevitably, he could not remember every detail.”

For instance, he was vague about which supermarkets he visited and couldn’t remember exactly the restaurants where he ate.

Zhang’s colleagues utilized all their skills and traced more than 60 close contacts within the first 12 hours, and 20 more later. All of them ended up quarantine, but none ended up as confirmed cases.

That may have been an example of good luck, but the virus detectives can’t rely on it all the time.

Shanghai has responded quickly to cases coming into the city with its policy erecting an “iron wall” around the city.

All passengers arriving on international flights must go through preliminary health checks before emerging from customs. Suspected cases of infection are immediately sent to hospitals for further screening and treatment, while others are assigned yellow, blue or other labels, with health measures attached to each category.

Those who have been in the hard-hit countries, like Italy, Spain, Iran, France, South Korea, Japan and the United States, within 14 days prior to arrival must undergo a 14-day quarantine at home or in a designated venue. They are transported from airports by chartered bus.

In cases involving local residents, their respective neighborhoods are notified about their home quarantine and help is provided with groceries and other necessities, and garbage-sorting.

“Diseases know no borders, and it is unrealistic to cut off communications completely, so we have to work together to get through this,” Yuan said. “It is our responsibility toward those in the city and in the country.”