Buyers are back! Retail in post-pandemic mode

Helen Wang took a last look at her small clothing shop near Changle Road. A new tenant is starting renovation work inside.

The new leasee, surnamed Zhong, is opening his third clothing shop in Shanghai. He signed a tenancy contract three days after Wang ended hers. She is moving to less expensive quarters.

“This has always been one of the most expensive and competitive areas in the city, shops coming and going every few months and very few lasting for years,” Wang told Shanghai Daily. “The virus outbreak obviously made it difficult for many shop owners like me. I’m not closing down my business; I’m just moving it to a cheaper place.”

It’s a scene repeated in many Shanghai streets. The revolving door of shops opening and closing has intensified since novel coronavirus hit the city and business bottom lines. Most shops and malls in Shanghai — large and small — are returning to operations, but nothing is as it once was.

“The post-pandemic retail sector looks different, and it’s too early to judge which changes will last and which will not,” retail and consumer goods analyst Daniel Ni explained.

“What’s certain,” he continued, “is that overall, winners came out stronger and the weaker will be driven out of business.

“That sounds bad for individual shops or brands, but not necessarily so for the industry as a whole. Such difficult times may test what really works and result in a new business model for the industry.” Anecdotally, there are many new changes, both for consumers and retailers.

Most people are still wearing masks, whether shopping inside or waiting outdoors. Shop owners have devised varying ways of social distancing. For example, some fashion retailers closed changing rooms temporarily and are turning to mobile apps that allow customers to “try on clothes” virtually. 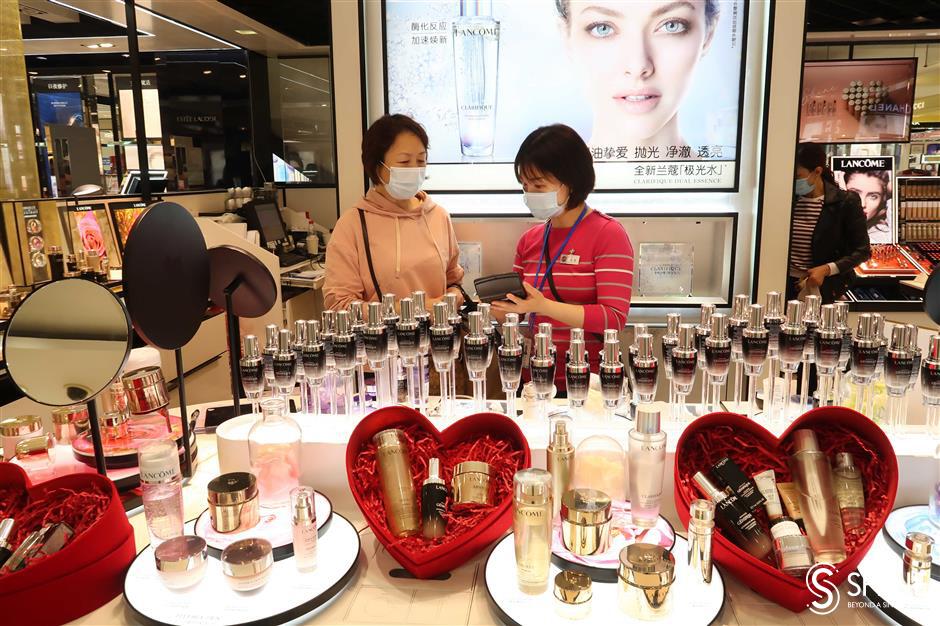 Wang is among those who began trying the app while people were still cooped up at home and placing orders online.

“The app is a bit redundant at the moment, but who says it won’t be popular in a few years, or even months?” she said. “During the stay-at-home period, it didn’t do much to help sales directly, but it was a good way to keep connected with customers. About half of them were curious and wanted to try it.”

Many consumers are also seeing district Party chiefs or deputies doing livestreaming for the first time as part of the shopping stimulus measures launched during the Double Five Shopping Festival, which kicked off earlier this month. Large discounts and promotional activities are on offer to entice buyers.

“Of course, they are not as good as the professional ‘e-celebrities,’ but it’s actually quite refreshing seeing them making the effort,” Zheng said. “I guess that’s maybe part of this new normal.”

The Double Five shopping season has been extended for the next two months, bringing with it discount coupons and vouchers, and hundreds of new activities and smaller shopping festivals. Will it all work to get people spending again?

Signs point to an initial strong return to domestic consumption. The Double Five festival reported sales of US$2.2 billion within the first 24 hours — from both online and physical retailers. Many individual shops are reporting doubled or tripled sales, compared with the same period last year.

But is this just a short-lived spurt of buying triggered by pent-up desire after long weeks of staying at home?

“I’m not sure whether if it will continue, but we surely have had a great time during these shopping season activities,” said Wang Lun, a cameraman in his mid-30s, who visited four shopping malls near his home.

“Discounts seemed greater in physical shops than online, so we went shopping,” he said. “Usually we go to malls for the restaurants or leisure activities for our 5-year-old daughter — not for shopping.”

Wang said the discounts aren’t quite as good as, say, the Double 11 online shopping spree in November but his wife enjoyed the experience of shopping again and spent around 16,600 yuan (US$2,336) in three days at malls.

“My wife insists that buying cheap is saving,” he said, with a laugh. “I’m not so sure everything is that cheap, but I agree with her that there is the added value of fun in shopping after two months of mostly staying at home.” 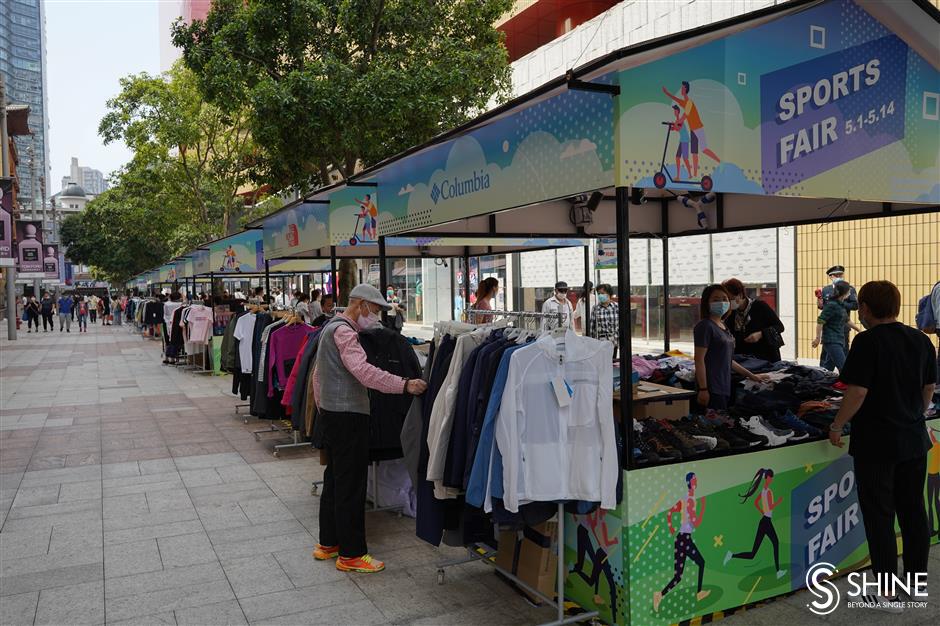 Jing’an Kerry Center operates a street fair, catering to residents who prefer to shop outdoors after the pandemic.

Crowds are back in the streets and popular shops, increasing every day. Traffic jams have returned, and familiar long queues can be seen all over the city.

“That’s a good sign, but it is a complex picture rather than straightforward ‘revenge shopping,’ which was on everyone’s lips last month,” analyst Ni said. “It has revealed a mixed picture of disparities within China, both regional and in terms of industries, and sometimes even within the same industry.

Among the returning queues are those on Huaihai Road M., “Shanghai’s Fifth Avenue,” which is filled with malls, luxury-goods retailers and shops selling time-honored local brands.

Local eatery Guang Ming Cun always has had queues out front. Four, in fact, for each of its food-product lines, including freshly made mooncakes.

The eatery’s mooncakes are said to be among the best in the city, and it can take at least half an hour to make a purchase on weekdays.

“It sounds ridiculous, but I was happy to see long lines of people again, and I’m someone who hates queues,” said Liang Xiehong, a retired primary school teacher in his 60s.

Liang passes by the eatery on his daily exercise routine. He had never bought its mooncakes in the 12 years he has lived in the vicinity — until early February.

“Back then, I was sad to see only five people lined up there, each wearing a mask and standing 1 meter apart,” Liang said. “It felt like the city had gone to sleep. Something was missing. So I took the opportunity to buy a mooncake for the first time that day.”

Across the street, a new and longer queue intrigued Liang.

Fried chicken chain Popeyes opened its first Chinese mainland shop there last Friday, offering hefty discounts. On opening day, a queue stretched over 300 meters, and some people waited over three hours to get their food.

“You know what, I might come back in two weeks when the line is shorter,” Liang said, as he took his grandson for lunch in a mall down the street. “I’ve got some new coupons for Double Five’s snack festival. I’ll have to see what we can get with them.”