Wang Suqing, 38, is looking to the Internet of Things to address that problem and preserve the cultivation of luscious grapes in Malu Town, Jiading District.

Wang, a native of the central Chinese province of Henan, has been working for the Shanghai Malu Grape Co and its research institute for 12 years. She is now vice general manager of the two entities.

In recent years, very few students who studied agriculture at university study have gone on to careers in farming. But Wang, who studied gardening and plant physiology, was anxious to adapt her learning to the soil. She joined the grape cultivation business in Shanghai in 2008.

“Farmers work under the blue sky and breath fresh air, but behind the sweet fruit there is a lot of toil,” Wang said.

Wang’s company harvests about 150 tons of grapes a year in 100 varieties. Only one of its 20 greenhouses produces grapes for winemaking.

When she first began work at the 10-hectare grape site, she was assigned mostly to administrative duties and work in research and development. But the job also required her to join co-workers in pruning grapevines, monitoring soil nutrition, spotting torn greenhouse covers and even harvesting fruit.

While the more experienced staff generally focus on the quality of the grapes, the younger generation like Wang is bringing digital skills to the work.

“We will inevitably use technology to replace human labor in some parts of grape cultivation,” Wang said. “Most farmers working for us are about 50 years old, and young staff are hard to recruit. Farming is, after all, a business of low profitability.” 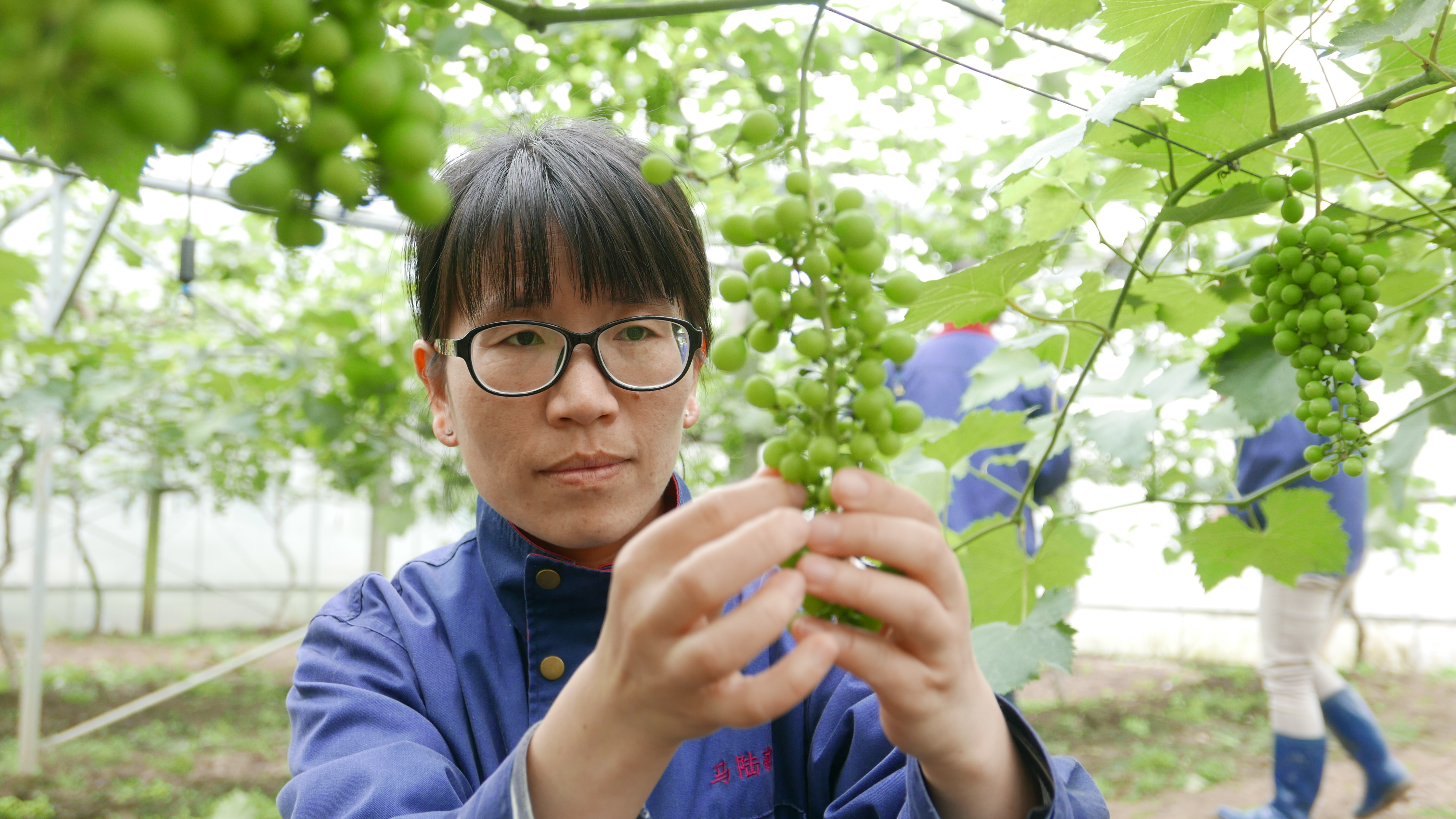 She is now leading a project to apply the Internet of Things to the farm operations, including some pioneer testing of new sensors in the 4,000 square meters of greenhouses.

“Grapes growing in too high a temperature have less flavor, while those growing in a colder environment bear fewer fruit,” Wang explained.

Shanghai’s rainy seasons are quite unfavorable for grapes, which grow best in sunshine. To solve the problem, additional UV lighting was installed inside the greenhouses. From their mobile phones, Wang and her colleagues can control the lighting from afar.

There is also a sensor that detects the density of carbon dioxide inside the greenhouses and increases the supply, if necessary, to drive the photosynthesis process in the plants.

“With the new technology, even rookies in farming can take care of the grapes, and we can save a lot of labor,” Wang said. “Instead of manually rolling out and rolling up plastic covers over 20 greenhouses, we can focus on other important jobs, like vine pruning. ”

But technology hasn’t yet replaced the need for human intervention, Wang said.

“Our sensors are supposed to open the ventilation windows automatically when the temperature is too high, but it turned out that the sensors couldn’t make that decision when it was not clearly over 35 degrees Celsius,” she said. “That required human intervention.”

Wang said her team is now cooperating with a local university to address the problem. They are also looking at a sensor to take precise soil temperatures.

Speaking of the future of smart technology in grape farming, Wang said sensors could potentially be powered by solar energy to make the whole process greener. But it is costly to invest in the development of such advanced sensors without funding help from government.

Wang’s farm has established a grape park for tourism, where visitors can harvest their own grapes.