A one-time backwater catapults to the forefront of 'smart' technologies

It was a fortuitous decision when Japanese electronics company Omron invested in the new Jinqiao trade zone of the Pudong New Area in 1993.

The company, a world leader in industrial automation and medical equipment such as blood pressure monitors, essentially grew with the zone.

“Back then, it was still largely a farming area,” said Zhu Lianming, a senior manager in strategy planning at Omron Shanghai. “It took me almost three hours to travel from People’s Square downtown to the company site 20 kilometers away. All the way, the view from window was just countryside. Roads were not named and addresses were not given.”

In the 30 years since it was founded, the Jinqiao Export Processing Zone has been transformed from a backwater bumpkin into an advanced hub of technology innovation.

It was initially set up just five months after Pudong was chosen to pioneer China’s new policies on economic reform and opening-up to the outside world.

Bolstered by government incentives, Jinqiao became a magnet for foreign investment. By the end of 1995, the zone had attracted 46 multinational companies.

Christian Dior from France, Philips from the Netherlands, Ford and GM from the United States, Siemens and Boehringer Ingelheim from Germany, and Hitachi, Omron and Sharp from Japan all set up operations here.

One top benefit of the Jinqiao zone has been its efficient infrastructure. A traffic network was built and then upgraded.

Then, too, Jinqiao was located in Pudong, a pioneer in reforms and development.

In 2012, it was renamed the Jinqiao Economic and Technological Development Zone, and three years later, it was incorporated into Shanghai’s free trade zone. In 2020, the southern section was upgraded to a comprehensive bonded area.

Although Jinqiao comprises only a 50th of Pudong’s land area, it now contributes almost one-fourth of Pudong’s industrial output and a 15th of Shanghai’s output.

By the end of November 2019, it has had over 13,000 registered companies and had attracted US$26 billion in foreign investment, including 105 projects run by Fortune 500 companies.

Jinqiao upgraded its activities from a labor-intensive site basically assembling parts for overseas companies to a “smart” manufacturing hub in its own right.

Beginning with the new millennium, authorities stepped up efforts to create a center for local development beyond just direct investment from offshore. Companies like Omron followed suit. 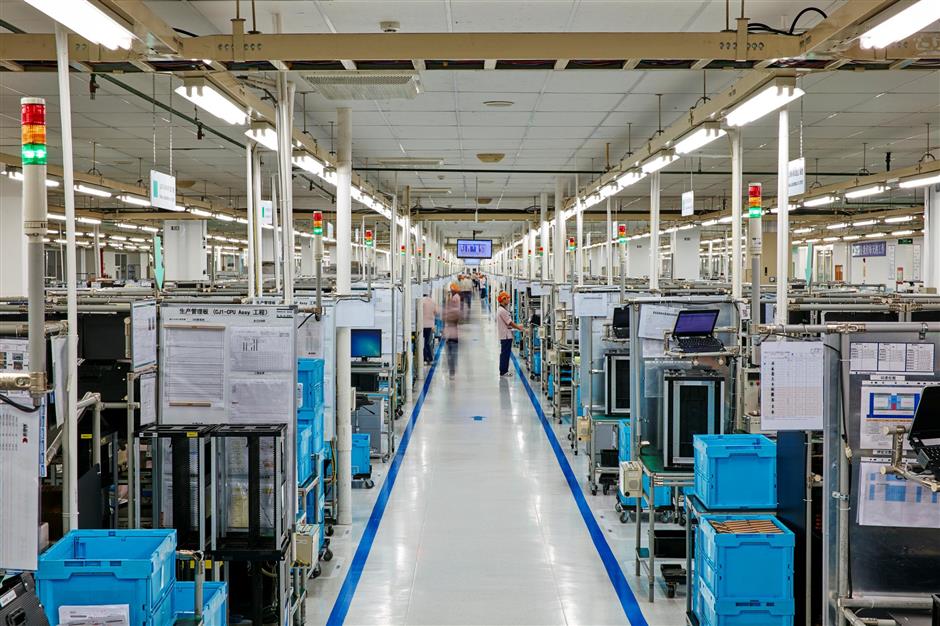 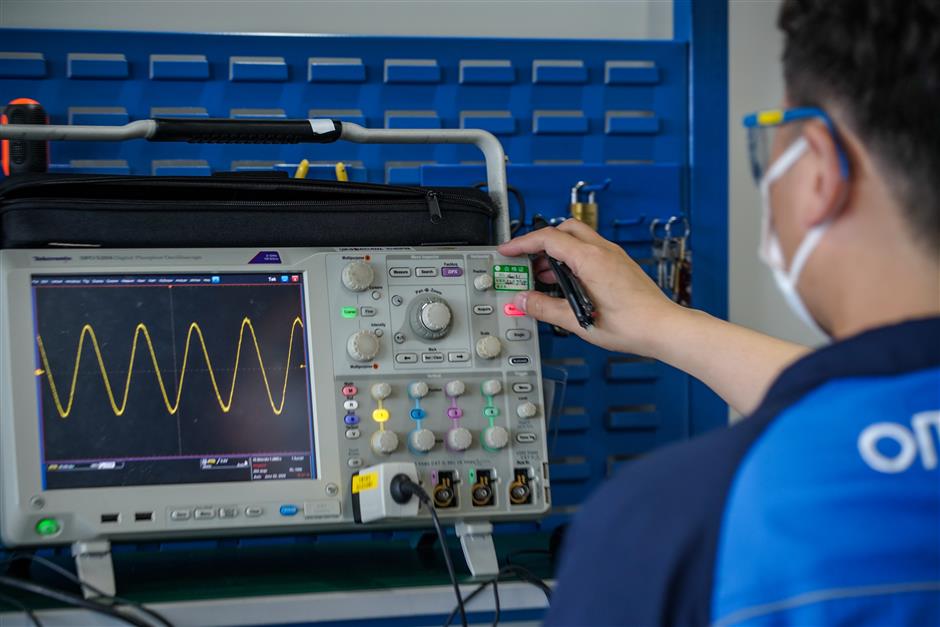 “In 2012, we changed our strategy from a manufacturer to an all-in-one industrial player – from research and development to after-sale services,” said Masato Nishiyama, chief operating officer of the company’s Shanghai arm.

Zhu added, “In the past decade, we have invested about 100 million yuan a year to upgrade our business, including building new factories and widening our talent pool. Our base in Jinqiao has expanded by a third to 71,757 square meters, and now covers research and development, design, purchasing, manufacturing, logistics and service.”

The Shanghai operation, the largest innovation and production base of the group, has developed more than 9,000 products with 154 patents, Nishiyama said.

Annual sales have soared sixfold since 2005, and half of the revenue comes from the domestic market.

Jinqiao’s development can be divided into four periods, according to Yan Junjie, deputy director of the Jinqiao Management Bureau.

A turning point came in 1998, when SAIC-GM, a joint venture of General Motors and Shanghai Automotive Industries Corp, put its first car on the market. That signaled Jinqiao’s transformation from a processing-oriented to a manufacturing-oriented center.

The merger of Pudong with the former Nanhui District in 2009 has accelerated the industrial upgrading.

Since 2013, Jinqiao has been integrating pillar industries with advanced technologies. In its latest round of transformation, the zone has become a center of 5G technology development, Yan said.

In March, the city’s first 5G industrial park opened in Jinqiao to promote the integration of 5G communications technology with automobiles and intelligent manufacturing. Industry giants Huawei and SAIC were among the first 42 companies who signed 13-billion-yuan investment deals, including Huawei’s first 5G innovation center.

In July, e-commerce giant Alibaba Group signed a partnership deal with German automaker BMW to set up an innovation base in Jinqiao to nurture technology startups specializing in the Internet and automobile manufacturing.

That base plans to provide more than 300 companies with technical resources, including digitization, cloud computing and cutting-edge automotive technologies, along with training and consulting services.

The auto industry is now undergoing a major transformation, especially in the wake of the novel coronavirus pandemic, according to Jochen Goller, president and CEO of BMW Group Region China. The outbreak has changed normal lifestyles and is driving manufacturing to a more intelligent future, he said. 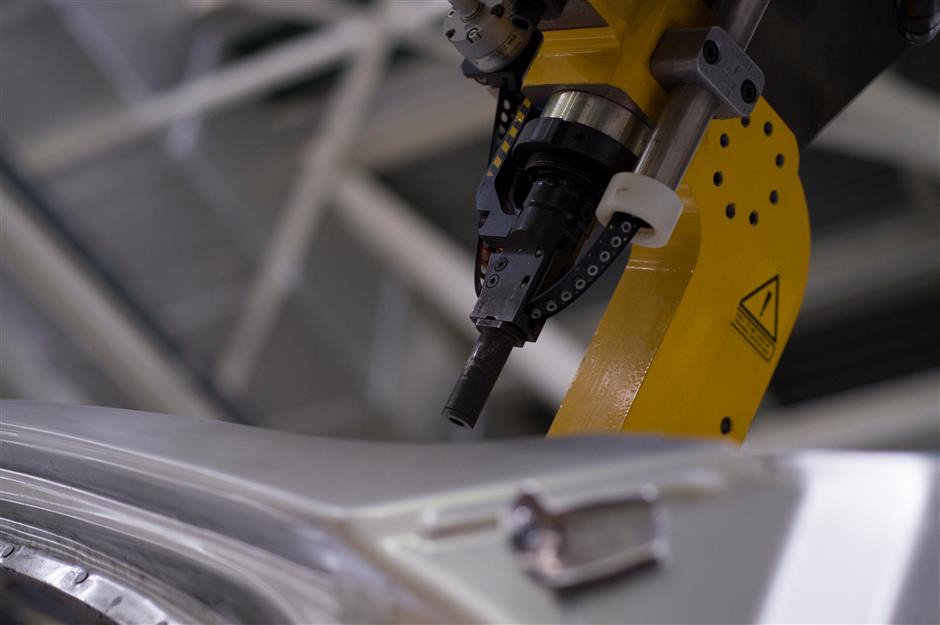 Robot works at the SAIC-GM's Cadillac factory in Jinqiao.

SAIC-GM has been part of that evolution.

“We have replaced a lot of human work with intelligent robots,” said Zhou Peng, executive director of the product strategy division of SAIC-GM at the company’s Cadillac factory in Jinqiao. “With high automation, we resumed work very quickly.”

The state-of-the-art Cadillac factory incorporates the Internet of Things in each process of its assembly workshop, making it one of the most advanced car factories in China, he said.

According to Zhou, robots aren’t really “replacing” the human workforce. Instead, they free front-line workers from repetitive or high-risk work and offer them the chance to upgrade their skills.

SAIC-GM, the country’s largest Sino-US joint venture, began operations in Jinqiao in 1997. Although the company now has four manufacturing bases in China, the Pudong zone still plays the leading role.

“A company’s development relies on the local environment,” Zhou said. “Jinqiao has showed great support at every step, from infrastructure, support facilities, favorable policies and availability of talent. Jinqiao offers the best environment for company development.”

He added, “The development of auto industry relies on a full industry chain, from mining raw materials to dealerships. Jinqiao has mapped out the auto industry landscape. Around us, we can find enough suppliers.” 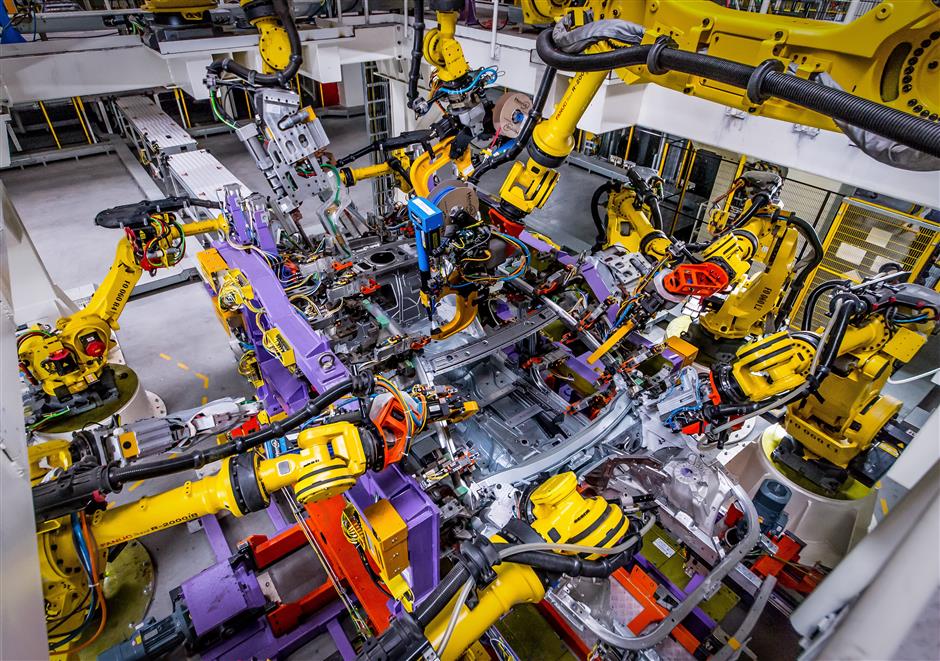 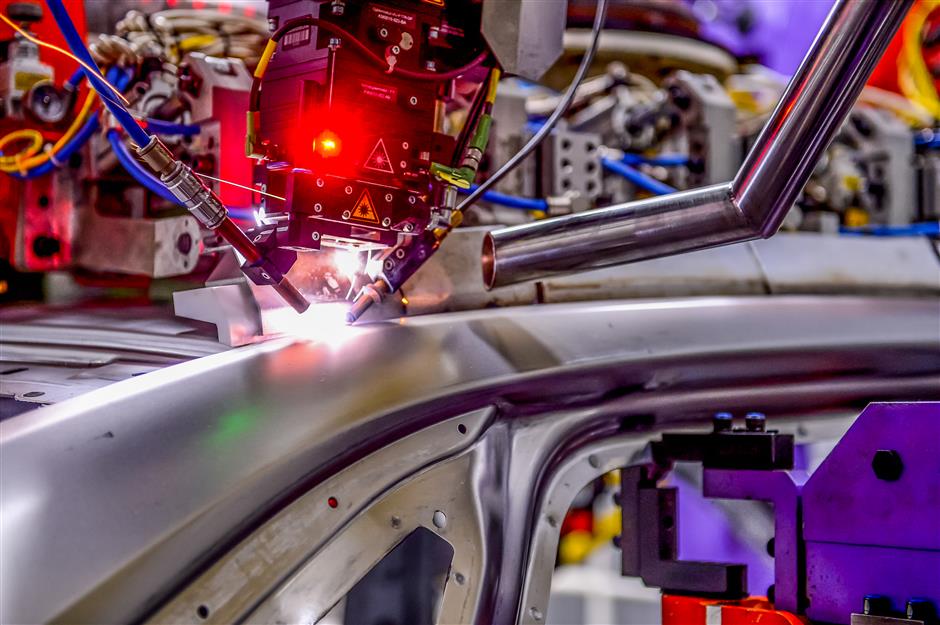 ﻿
Special Reports
ADVERTISEMENT
61938
,
Classic Hangzhou fare wrapped in nostalgia
Honor releases first products since Huawei spinoff
Forum calls for more creativity to drive tech innovation
'Meet The Bund' for a Michelin star journey
Let an umbrella be your smile! A town with plenty to be happy about
Boys vs girls: It's hard to shake old ideas
Ever-evolving trends in cuisines and wines
How to tell opinion from fact: Do you live in a world of two realities?
Animal adoption as of January 24
Ordination terrace stands strong as a symbol of Buddhist faith
EXPLORE SHINE