Online project brings back the glories and suffering of war

Jiang Tao was touched by the words of author Yu Shicun in one of his books, where a journalist interviews a soldier heading to Hebei Province to organize Communist guerrilla forces during the war against Japanese aggression.

“When asked what he wants to do after the war ends, the soldier replies: ‘At that moment, I shall be dead. Most of us soldiers shall die in this war,’” said Jiang, 45. “I was deeply moved by his spirit of facing death unflinchingly and wondered how many such stories remain unknown to the public.”

At the same time, Jiang learned that someone overseas was livestreaming World War II online, so he asked two former classmates from Shanghai Jiao Tong University — Qian Yinghao and Xi Kang — to join him in an online project to chronicle the pain and glory of China’s resistance against the Japanese between 1937 and 1945.

They called their project “Livestreaming the War,” even though it is not livestreaming in the conventional sense. The project started on July 7, 2012, marking the then 75th anniversary of the Lugou Bridge Incident, which is recognized as the start of Japan’s full-scale invasion of China. The project ends with the Japanese surrender in 1945.

In the past eight years, they have made about 35,000 daily postings on their Weibo account with information collected from old newspapers and other documents.

They worked on their project in their free time. Jiang works in cultural communications, Qian has a job in finance and Xi is an accountant.

In their first posting, the team used the photo of a Chinese soldier, published in Illustrated London News in 1937, as the project’s signature picture.

Jiang said one of the most difficult tasks was verifying information before posting it.

“For instance, if one newspaper said something happened on a given day, we needed to find another source to verify that,” he said. “I had never done that kind of work before, so it took me long time to get the hang of it. But I finally did.” 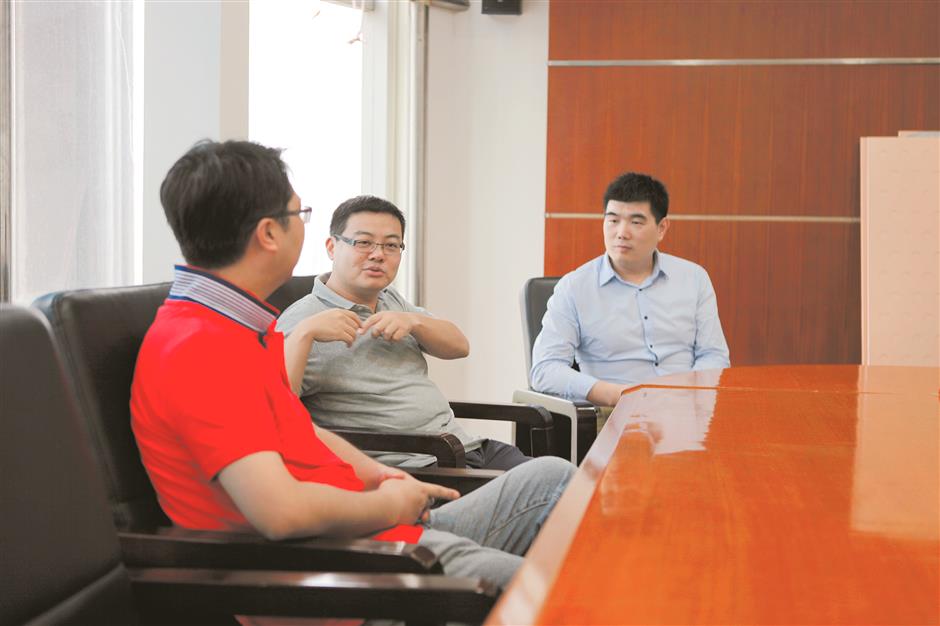 (From left) Qian Yinghao, Xi Kang and Jiang Tao want to keep the history of the war alive in the public mind through the stories of soldiers and common people who devoted their lives to the cause of the motherland.

A database the trio established became the foundation of the project. Every weekend, materials for the coming week were organized. There was no last-minute rush to mar the smooth running of the project.

The average 10 pieces of information they posted every day highlighted remarkable moments of the war, such as the battles of Pingxingguan, Taierzhuang and Changsha. The postings also told the stories of nameless soldiers and civilians who sacrificed for the country.

There has been a recent burst of renewed public interest in the war since the blockbuster movie “The Eight Hundred” hit local cinema screens. It chronicles the soldiers who defended Shanghai in a last stand against the Japanese at the Sihang Warehouse near Suzhou Creek.

In November 2012, the team’s Weibo account detailed that siege. It recounted how Lieutenant Colonel Xie Jinyuan led several hundred soldiers to defend the Sihang Warehouse, which had been a bank deposit facility. In the end, after a valiant resistance, the soldiers who survived had to retreat. A newspaper photo of the time was attached to this posting.

The posts also showed how other elements of society rallied to the cause. The advertising industry printed the story of Sihang Warehouse on handkerchiefs. The education sector raised student subsidies, and the financial industry tried hard to break Japan’s economic blockade.

“In the flames of war, China tried every means to develop its education, industry and science, with an eye toward the future,” Jiang said. “The information showed how people from every walk of life across the country believed in China’s future. I was deeply touched every time I posted something.”

He said a statement from the government of the then Republic of China revealed the soul of the nation and the concern beyond national borders.

Besides texts, the three project members posted comics from Chinese and foreign newspapers. Some reflected the suffering of ordinary Japanese people during the war. 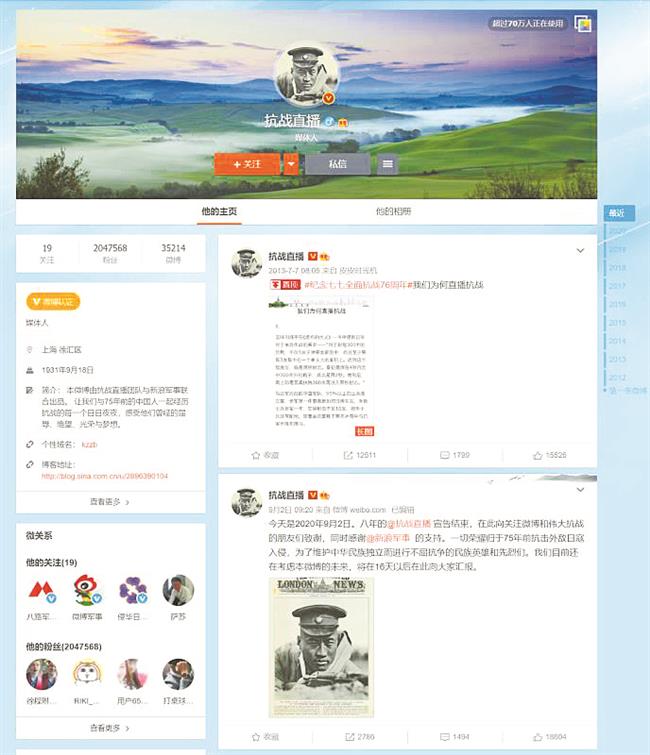 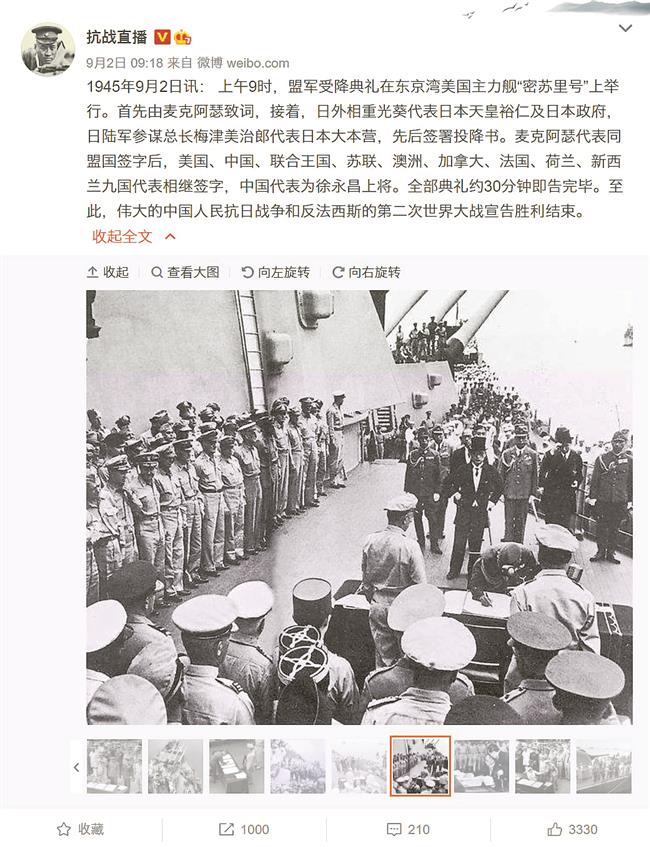 In a “tell and talk” segment, Jiang explained to viewers why they decided to undertake the project.

“On April 26, 1940, a heroine named Li Lin led a cavalry charge against a Japanese encampment as cover for an evacuation of residents and Chinese troops,” he said. “She was caught and committed suicide. She was only 24 and in the third month of pregnancy. Li was an overseas Chinese living in Indonesia until she returned to China.”

Jiang showed photos of other efforts by overseas Chinese during the war. In New York, Chinese patriots raised money for the cause, while those in Southeast Asia said good-bye to sons who decided to go to the Chinese mainland to fight for the motherland.

“Some overseas Chinese had never set foot on their motherland, but once they arrived, they took up arms to protect her,” Jiang said.

The project also detailed military equipment used by Japan and China. One picture showed a large, well-equipped rolling kitchen used by the Japanese to feed its troops, while many Chinese soldiers starved.

Another picture showed a balloon used by the Japanese for spying.

“By the end of 1937, the Japanese army was flying balloons from a hill in the outskirts of Nanjing, three days before the city was conquered,” Jiang said. “With the balloons, Japanese scouts could survey the layout of Chinese military defenses and position their guns accordingly. The Chinese army had no means to fend off the balloons.”

Other postings relate how Chinese General Feng Yuxiang said many newly recruited soldiers couldn’t read or even tell right from left. Their firing practice was limited to 10 bullets a year. Many soldiers didn’t have thick, warm clothing and fought life-and-death battles in the snow wearing only straw sandals.

Children joined the war cause.

“As far as we could determine, at least 14 scouts returned to China from Singapore,” Jiang said. “By October 1938, eight of them were died and six suffered severe injuries. Do netizens who now say the war doesn’t matter truly know the sacrifices that were made?”

He said the project wasn’t designed to instill hatred but rather to ensure that people don’t forget history.

“I believe that we need a fuller understanding of the war to appreciate what people sacrificed for the country,” Jiang said.

Asked about their next project, Jiang said an announcement about that will be released on September 18 to mark the anniversary of the start of Japan’s invasion.