China’s 4.6 million-plus food delivery riders were trending this week after Renwu (People) magazine published a report detailing their race against time, sometimes leading to traffic violations, accidents and even death.

Delivery workers risking their lives on e-bikes have trended a few times before, especially when accidents happen and people die.

In 2017, Shanghai’s traffic police revealed that one fatality or injury involving delivery workers occurred every 2.5 days on average in the first six months of the year.

Last year, between January and June, five people were killed and 324 injured in the city in traffic accidents involving delivery services. Ele.me was involved in 111, followed by Meituan Dianping’s 109. The two account for more than 90 percent of the food delivery market.

Users of China’s takeaway delivery services are estimated to be around 460 million, nearly a third of the country’s population, making it a concern for many, who call the riders little blue man (for Ele.me's blue uniforms) and little yellow man (for Meituan’s yellow uniforms).

This time, the heated discussions on social platforms led to responses from both companies, and that from Ele.me in particularly renewed the controversy and disputes.

Alibaba-backed Ele.me said it would add an option for customers to specify whether they were willing to wait an extra 5-10 minutes for delivery.

Later, Tencent-backed Meituan released a statement to give riders flexibility of eight minutes for each delivery, and to take account of the weather for target times.

“Some riders called nicely when they anticipate delay, and I usually agree for them to click ‘order arrived’ before it actually arrived, I’m not picky on that,” said 32-year-old office administrator Selina Chen, who orders lunch takeaways five times a week.

“But why should I bear an obligated moral choice of five minutes? If the target time is unreasonably calculated, why can’t platforms give riders more time? And who can ensure that platforms won’t force riders to take more orders if I click the option of waiting five more minutes?”

A food deliveryman surnamed Sun, 25, said nobody could assure that. He’s been in the industry for nearly two years, working 10 hours a day on average, starting at around 7am. Working almost every day, he can make about 10,000 yuan (US$1,463) a month from about 1,000 orders.

Orders and incomes dropped sharply in January and February, when restaurants were closed and many people chose to cook at home amid the pandemic. Business gradually bounced back in the following months and Sun’s income, heavily dependant on both the number of orders and performance ratings, is back to pre-virus times.

“A big part of the rating is whether you are on time. You get fined for taking longer than the platform’s estimated target time. The fine depends on whether you are a full-time or flexible worker, and which station you belong to,” Sun told Shanghai Daily, adding that he had about 30 overtime orders every month when he first started.

“Much better now, and many customers are understanding when I call them for estimated delay and ask them to click ‘order arrived’ to avoid a fine. But estimated times have definitely been shortened a few times in the last two years I worked, though I haven’t kept track of the exact time shortened.” 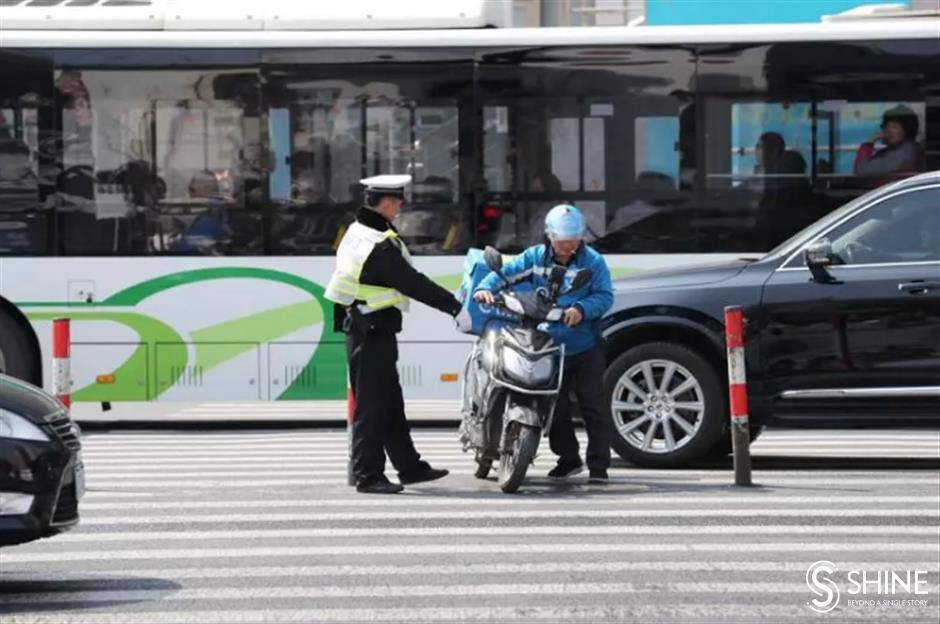 A deliveryman is stopped by a traffic officer after he violated traffic rules in Shanghai.

Sun has had some minor accidents, from crossing against red lights, or riding on prohibited roads or the wrong way. His e-bike has broken down three times, but he still completed his deliveries.

Renwu’s story, based on interviews with over 30 riders, revealed a more detailed picture. Those interviewed say times have shortened between 15 and 20 minutes in three years over the same distance. Riders are often required to deliver within 30 minutes, and this time window includes the time for restaurants to accept the order, prepare the food and give it to riders.

Some recall going on prohibited routes or riding the wrong way when they follow the optimized routes the platforms provide for them. In other cases, they violate traffic laws and risk lives when running out of time.

It may explain the anger of many about the five-minute choice in the response by Ele.me, with some calling it a “moral kidnap.”

“The rules for delivery workers are set by food delivery platforms, and it is simply against basic logic to make consumers bear the fault,” Tang Jiansheng, the council’s deputy secretary-general, told the media.

The Shanghai Information Services Association argued otherwise, saying it has always been a three-part relationship.

“The platforms sped up the deliveries because that’s what the customers wanted. They serve the customers’ needs, so the customer is always part of the equation,” Lu Lei, the association’s secretary-general, said.

He admitted that the primary goal for any enterprise is profit. “It requires regulations,” he said.

Meituan’s operating profit turned positive for the first time in 2019, at 2.7 billion yuan, with revenue surging 49 percent to 97.5 billion yuan, thanks to its food delivery business. Fees for delivery riders account for a major part of its costs.

Revenue fell 12.6 percent in the first quarter as orders decreased due to lockdown, but performed better than expected in the second quarter.

“‘Optimize’ is a very common but also vague word, what element has been optimized, and optimized for whom, few people outside the industry think about that behind the algorithms,” an angel investor for technology companies identifying himself as Bell told Shanghai Daily.

“We often take optimized algorithms for granted, and rarely consider its ethics and bias resulted from data input by humans. Those humans have their optimized goal for the algorithms.”