Unmasking the success of a company dedicated to the national interest 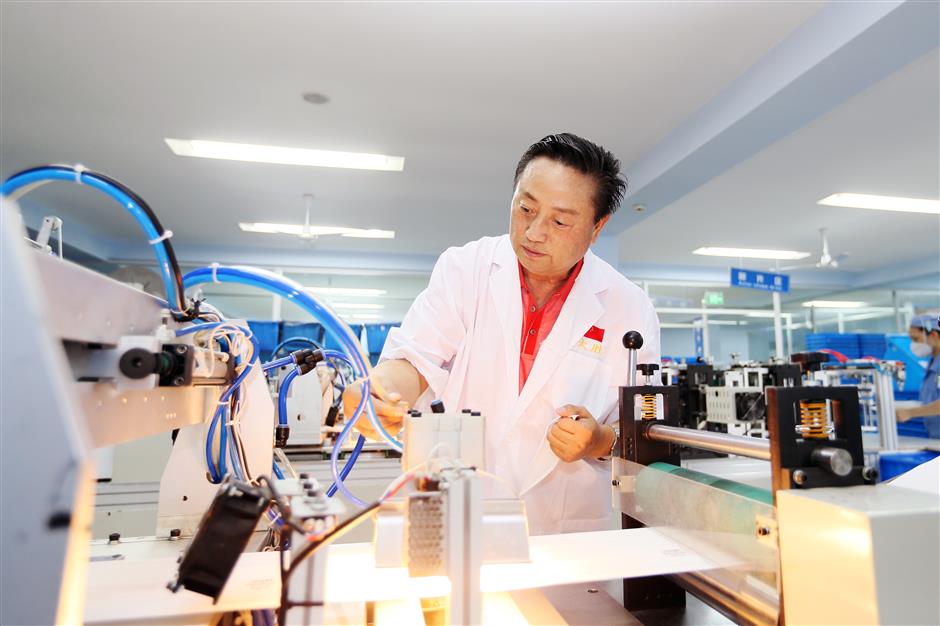 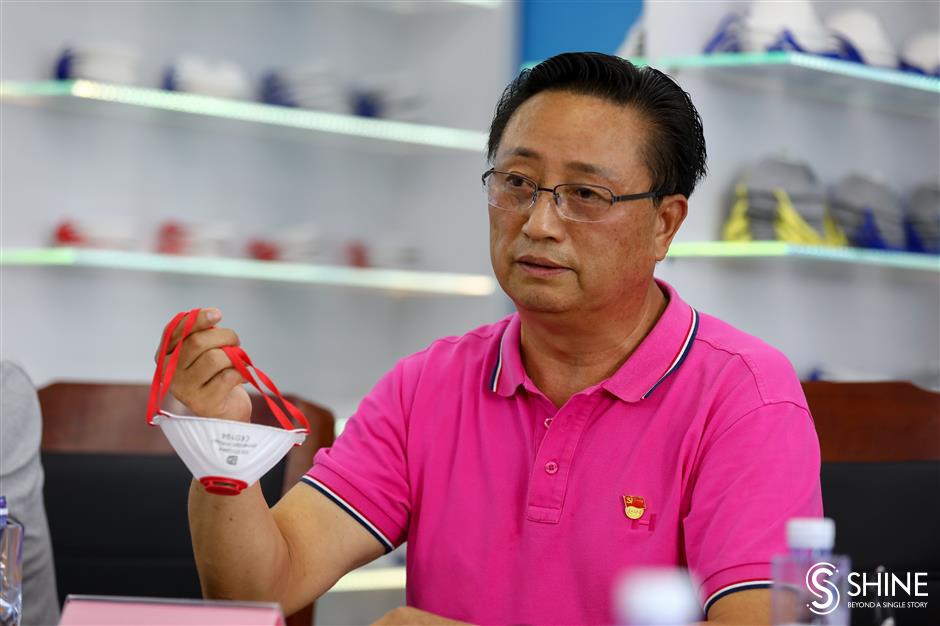 For Wu Shengrong, chairman of Shanghai Dasheng Sanitation Products Co, fighting coronavirus has been a race against time as his company joined the battlefield.

The company, based in Songjiang District and established in 1997, was exclusively an exporter until coronavirus hit. Dasheng suspended exports and turned its full attention to producing facial mask.

Flash back to January 21 this year. Wu, 66, was watching television news and learned about the novel coronavirus outbreak in Wuhan. He immediately thought back to the SARS epidemic in the early 2000s, when masks were widely used to stop the spread of the disease.

"All of our factory staff were already on Spring Festival holiday leave,” Wu said of the situation he faced last January. “The country was short of masks and we had no stockpile. So I decided to restart our holiday-idled production lines immediately."

Of the factory’s 160-plus workers, only about 10 percent were still in Shanghai. They were summoned to the factory. On the eve of Chinese New Year, while most people were enjoying traditional family reunion dinners, Wu and 14 workers were operating the production lines.

"What could we do?” Wu said. “Drivers, cleaners and management staff all pitched in to keep production running around the clock and produce as many masks as we could. We had no other choice."

Shanghai has 17 facial-mask manufacturing plants. Dasheng was the first to resume production after the virus outbreak. The company supplied more than 300,000 masks daily to Shanghai during the epidemic, without increasing prices.

Wu modestly called Dasheng’s effort “a drop in the bucket” among the tens of thousands of privately owned companies in China that answered the call to help combat COVID-19.

Over the past 23 years, Dasheng has developed more than 130 types of facial masks, securing 68 patents. Most of the machinery used by the company was developed in-house.

Because of the high quality of its N95 masks, Dasheng received an unexpected order from 84-year-old respiratory disease expert Zhong Nanshan in late April for masks to assist Canada in its fight against the pandemic. Wu donated 12,000 masks to Zhong’s team free of charge.

Wu said he got the idea of establishing a facial mask company during a China Import and Export Fair in the late 1990s. He met a foreign buyer there who said he couldn’t find effective anti-dust mask suppliers. At the time, there were only gauze masks on the market.

Wu had to search far and wide for the kind of non-woven fabric that would provide respiratory protection. He also found that existing machinery wasn’t up to the task and new equipment had to be created. 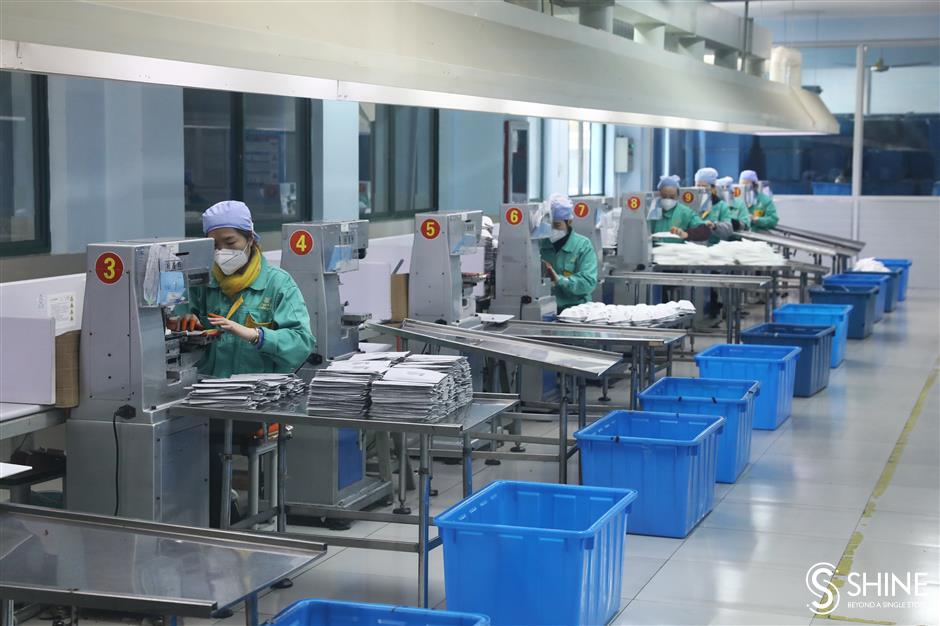 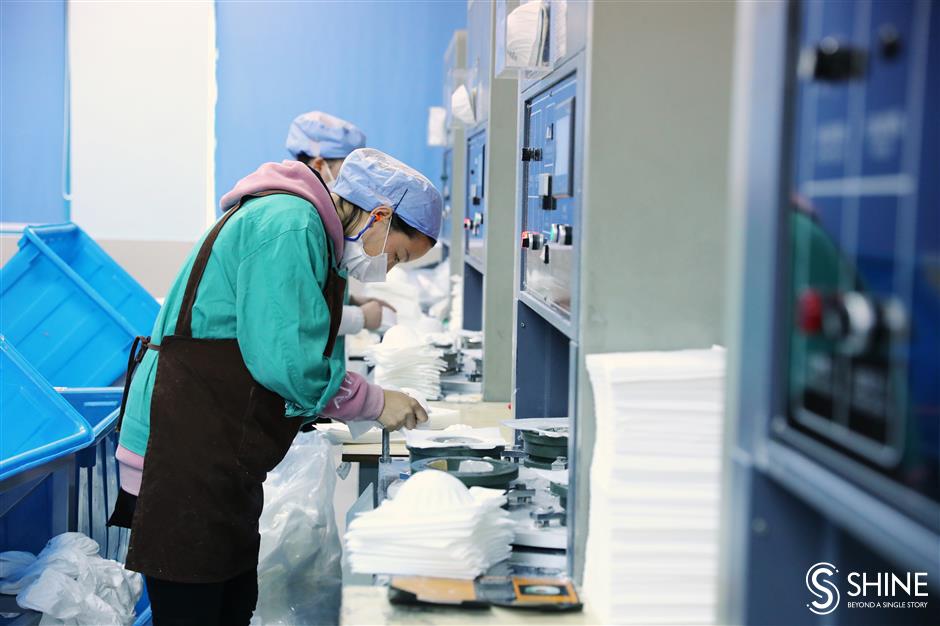 Over the past 23 years, the company has been constantly upgrading products to make them more comfortable to wear.

“I was not tempted,” Wu said. "Making money was not my purpose. I wanted to create a time-honored brand and a showpiece of how a private Chinese company could compete internationally.”

In 2019, Dasheng won a national rejuvenation brand award, the only company to be so honored in the facial mask industry.

Wu was born into a poor farm family in Songjiang’s Xinzhongbang Village. He quit school in the fifth grade to help support his struggling family.

"In freezing temperatures, I herded ducks into paddy fields with bare feet,” he recalled.

In an accident, he lost his little toe.

"My childhood was bitter," Wu said.

But he was a determined survivor. At age 16, he took classes in rural medical treatment and shot to the top of the class despite being the youngest student. After half a year of study, he became a rural medical practitioner.

In 1972, Wu joined in the People's Liberation Army of China, which he describes now as one of the happiest times in his life. The army also gave him the chance to practice his medical skills.

When soldiers came down with influenza, Wu went out and picked traditional herbs to treat them. When they suffered from diarrhea, he gave them a concoction of herbs and ginger. When the they developed foot blisters after a 50-kilometer hike, he helped relieve their pain.

He retired from the army after four years. 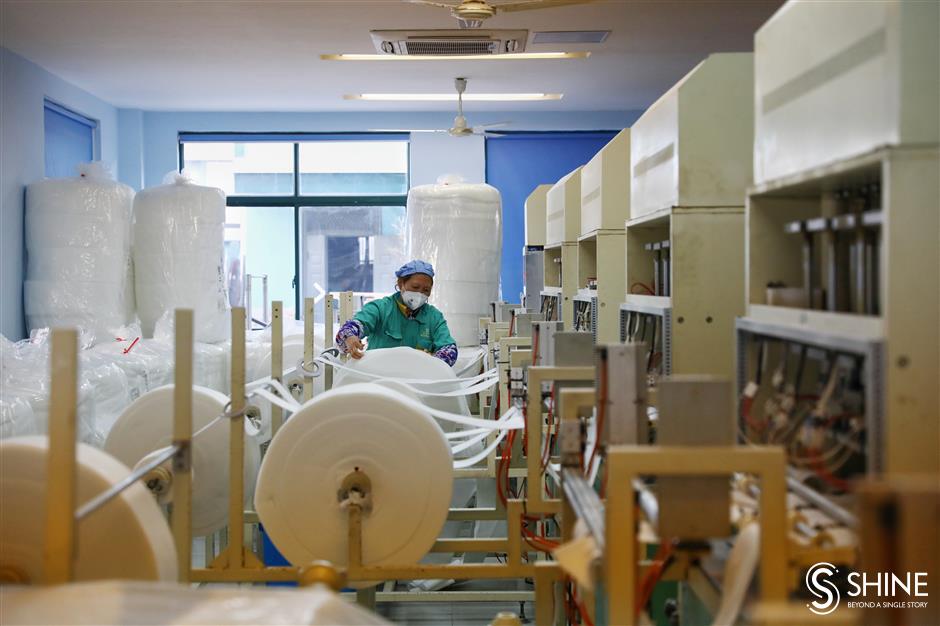 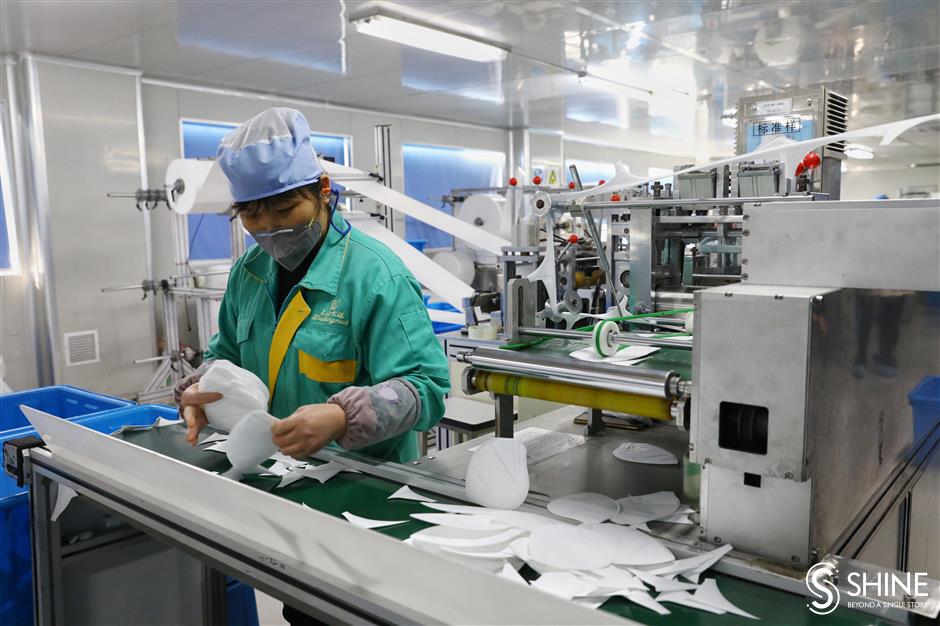 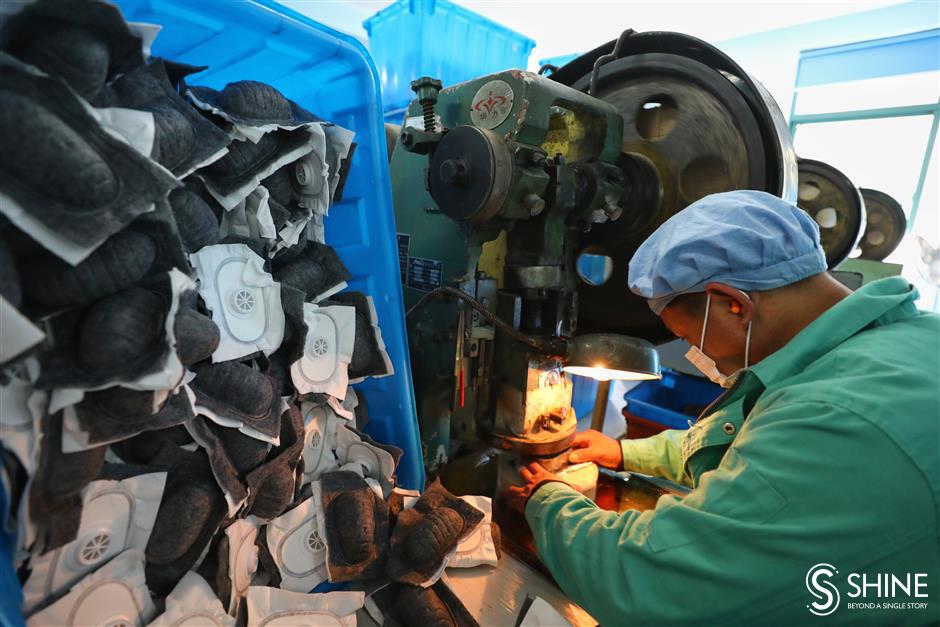 His same sense of service to the nation carried into Wu’s business life.

In 2003, during the SARS outbreak, Dasheng staff worked around the clock to deliver 100,000 masks to Beijing every day. During the Wenchuan earthquake in Sichuan Province in 2008, the company sent 500,000 masks to assist in rescue efforts.

Before the start of the autumn school semester this year, Dasheng donated 500,000 masks to students in Songjiang District. Some were specially designed for students below grade six.

"Whatever, whenever and wherever, we will spare no effort if our nation needs us," said Wu.

Dasheng is planning an expansion with modern new plants. It is also introducing “superfine fiber melt-blown” production lines from Germany, which will double production capacity.

"I want people to feel they are not wearing masks when they actually are," Wu said.

Zhang Zhenwei, general manager of the company, said Wu always places national interest above all else.

"During the Spring Festival holiday, he found a minor problem on one production line and called an immediate halt," Zhang recalled. "He told us that even during an epidemic when time is of the essence, quality always is important. He pursues perfection.” 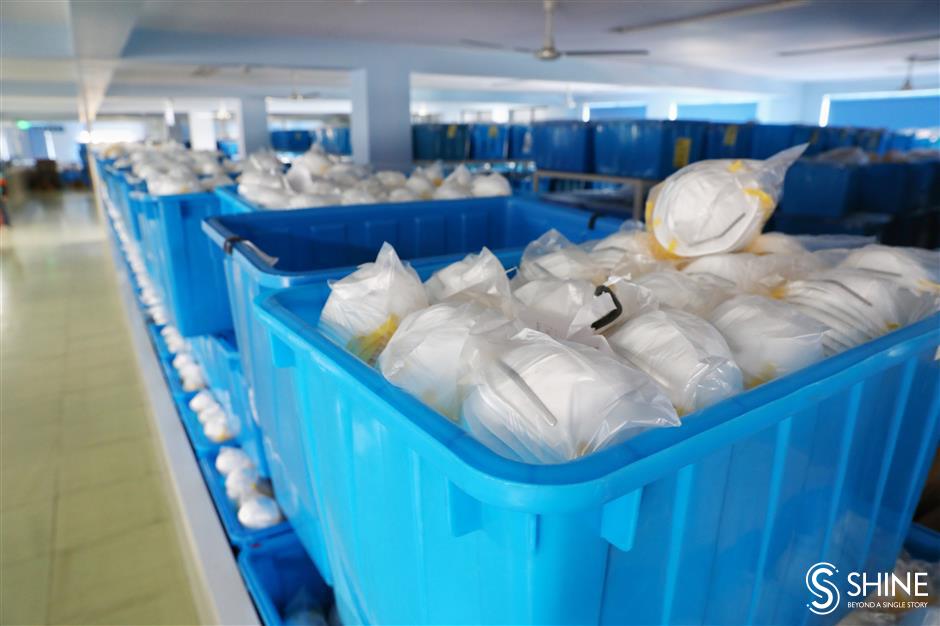 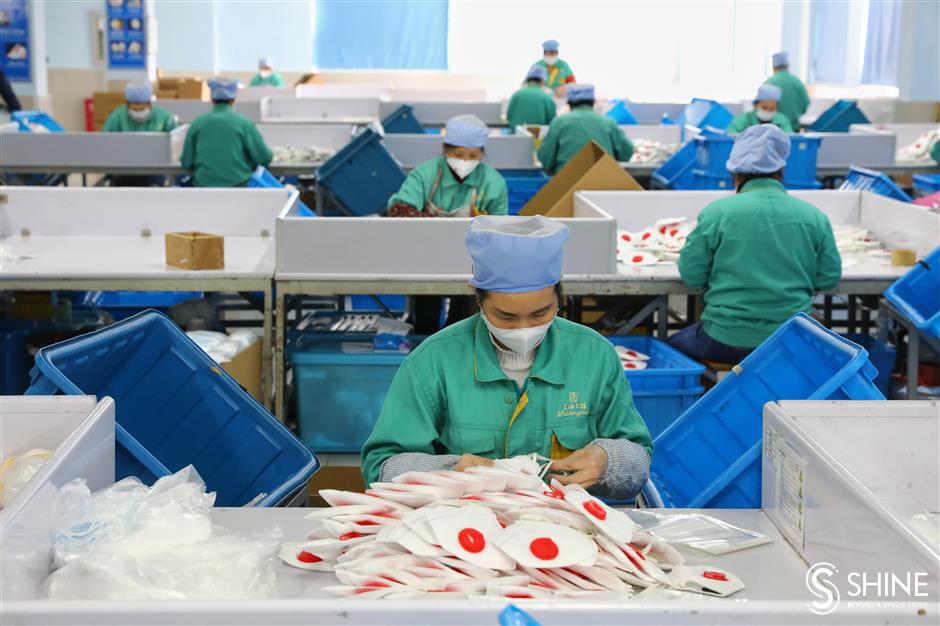