Pockets full of pleasure in enclaves of eco-escapism 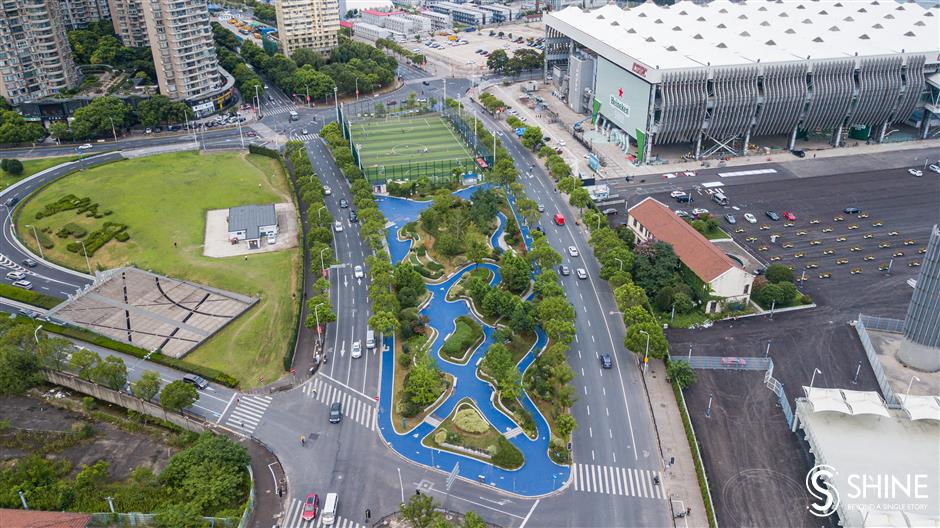 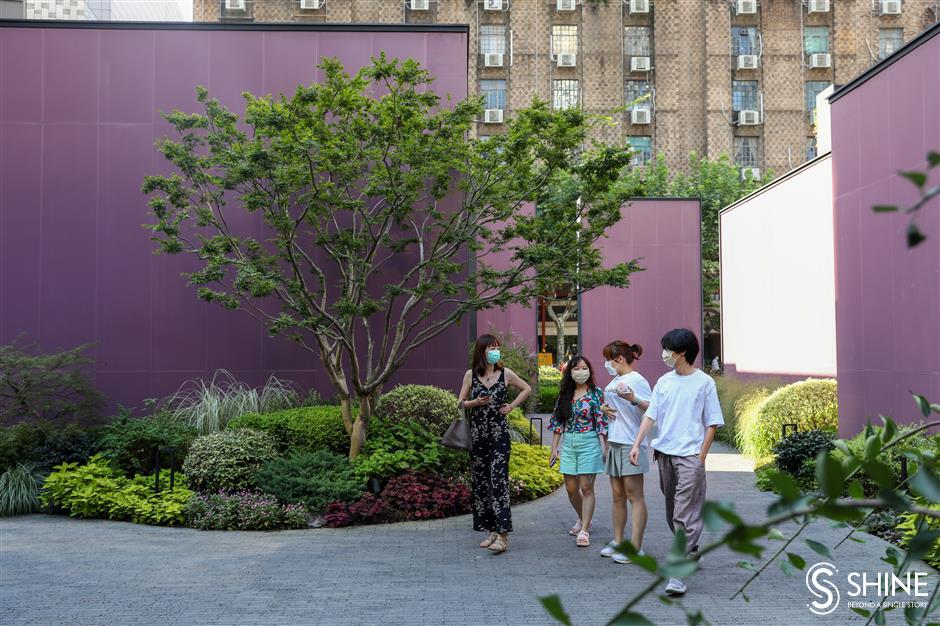 Amid urban concrete, green is a soothing color, but the downtown landscape can be unforgiving where space for city parks is concerned.

Pocket parks are welcoming in every season.

In spring, mild breezes and birdsong attract people living or working nearby. They come to photograph flowers, do some exercise or just sit in contemplation.

In autumn, foliage turns color with splashes of crimson and gold.

And in winter, dull gray days are brightened by nature’s landscape

Once a day, retiree Zhou Xiaomei visits Taidi Garden, a pocket park in Huangpu District, to do some exercises. It’s only minutes from her apartment.

"I walk on the fitness trail, look at the flowers and watch the young play football,” she said. “It’s all very comforting. Best of all, the park is close to my home, open 24 hours and free to use.”

The design of the Taidi Garden, which is located on the Huangpu riverside, drew inspiration from elements of classic European terraced gardens, said Zhu Xiaojun, head of planning and construction for the district’s greenery authority.

The east-west axis of the park runs through a football field, the core terraced landscape and walking areas. On both sides of the axis, plants in an array of colors are arranged symmetrically. 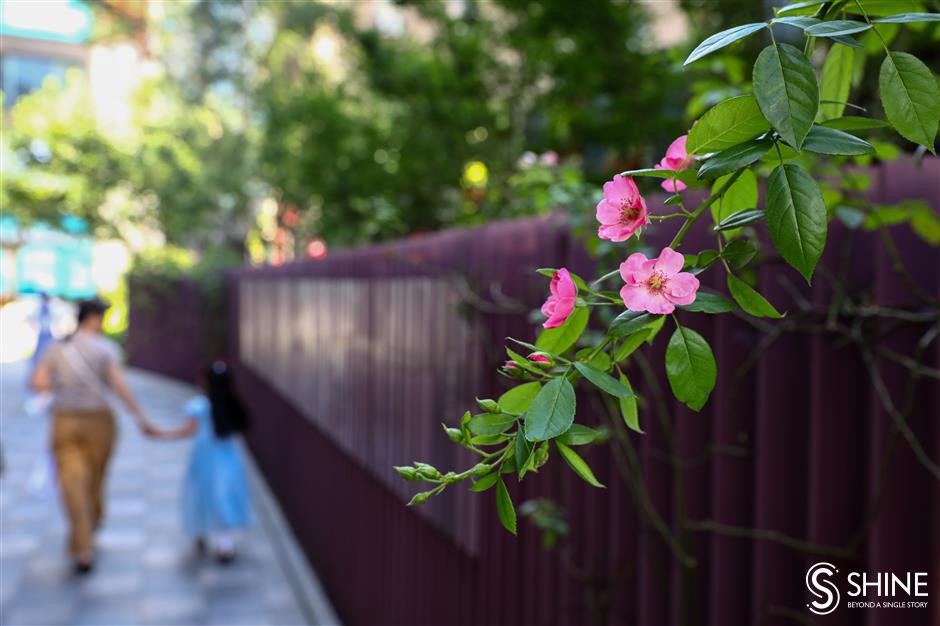 People walk at the Taidi Garden in Huangpu District. 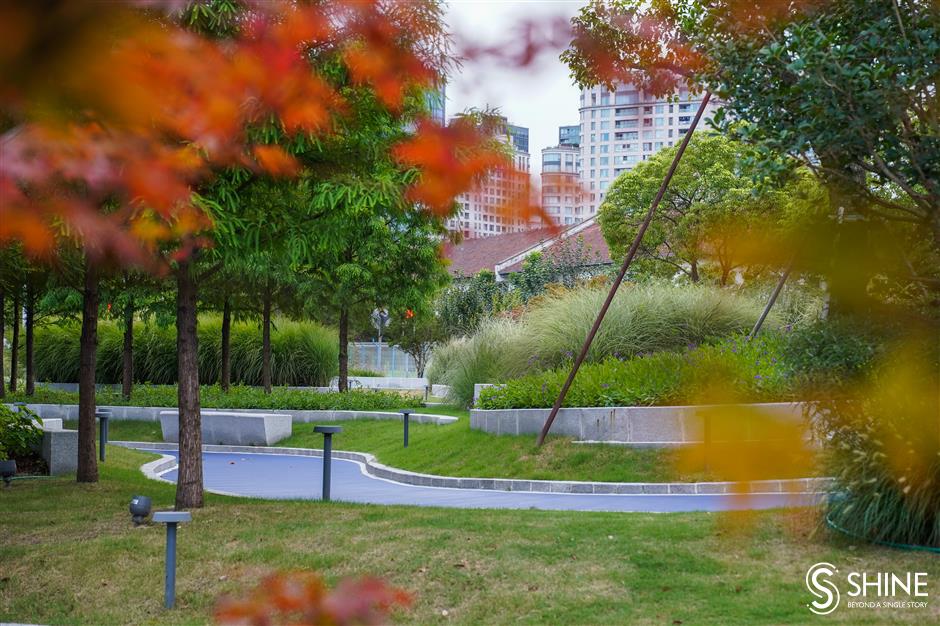 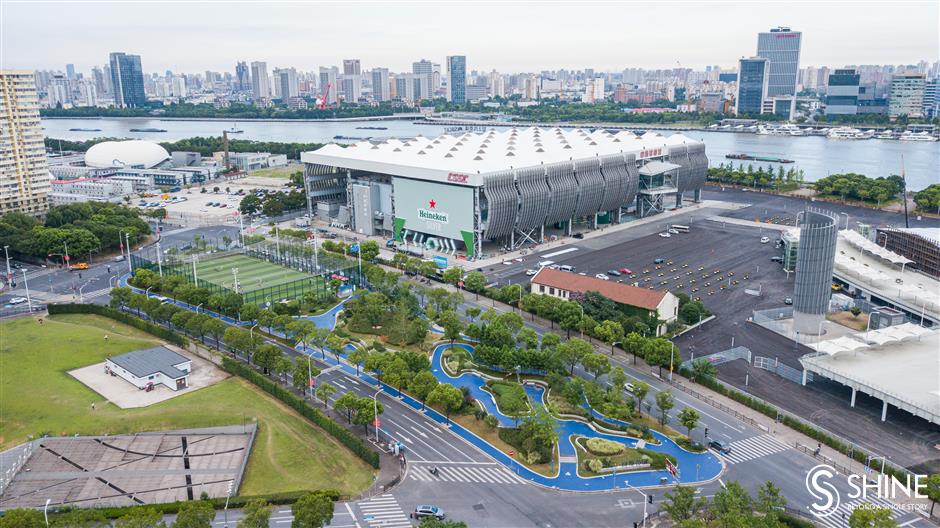 Two years ago, the pocket park was simply a vacant lot.

“Authorities decided to transform it into a place combining sports and greenery,” said Zhu.

All sidewalks inside Taidi Garden and outside the football field have been transformed into fitness footpaths.

The flora in the park is regularly maintained by professionals. At nightfall, landscape lighting illuminates the park, inviting local residents to take an evening stroll.

Confronted by a shortage of available land, Shanghai greenery authorities are making best use of what sites they can find to create pocket parks.

The enclaves are small, restful, diversified and fun.

Lu Qin said she was delighted when a piece of wasteland outside Dongyuhang Road Kindergarten in Hongkou District was turned into a pocket park.

"In the past, I had to stand waiting for my granddaughter to come out,” she said. “Now I have a place to sit down."

Tongmengyuan Garden on Tongzhou Road in Hongkou District covers slightly over 1,000 square meters adjacent to residential complexes, a kindergarten and a shopping mall.

"We set out to satisfy the diversified needs of people of different ages," said park designer Xu Aijun.

A footpath section is painted with a grid of English letters, enabling children to play hopscotch. The children’s area is decorated with cartoon figures, blackboards and distortion mirrors. Flower beds are designed in different heights to accommodate various age groups.

“The park is a lot of fun, and I often take my granddaughter to play here," said Lu. 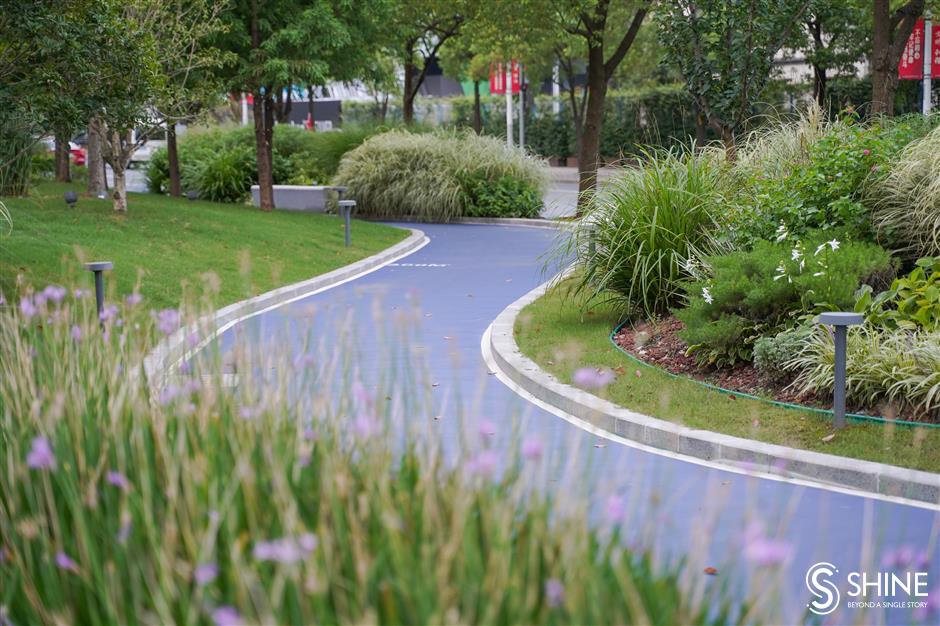 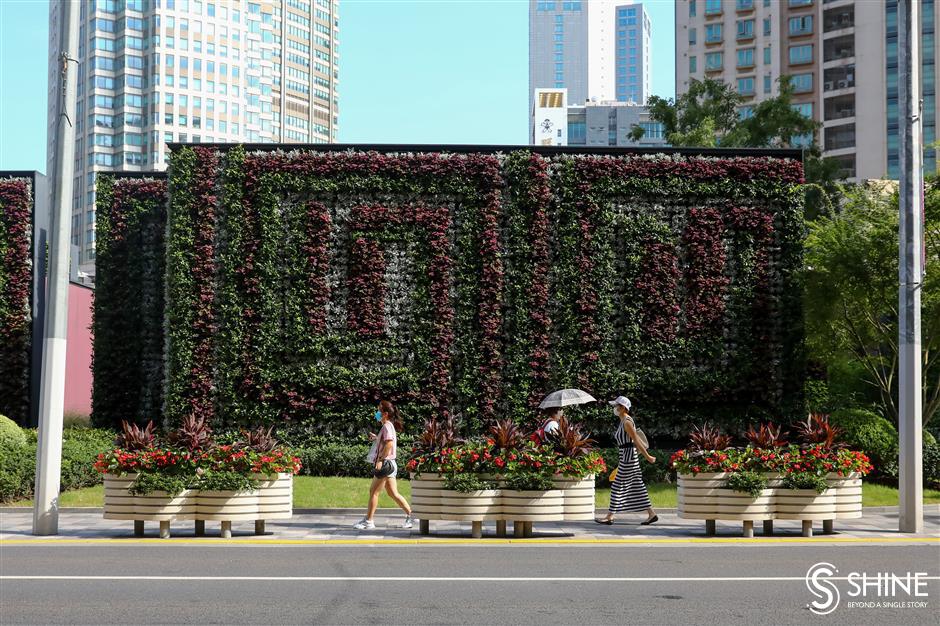 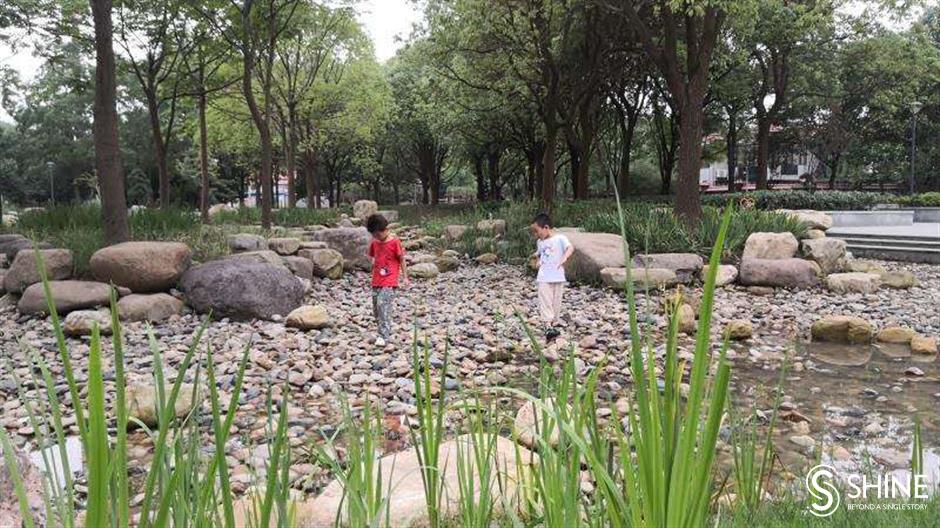 There is no strict standard on the size of pocket parks. They can range anywhere from 500-5,000 square meters.

Just because they are small doesn’t make designing them any easier.

About 4 kilometers from Tongmengyuan Garden, the Guangyue Road area suffers from a surfeit of greenery.

Officials in Hongkou District surveyed the area in 3-kilometer radius and found 10 potential sites for parks with areas of between 80 and 230 square meters.

Seven have opened, and the rest are scheduled to open in November.

"A small area is no reason to be careless in design,” said Huang Ling, chief engineer of the Hongkou District Greenery Management Center.

Authorities worked with universities and botanical gardens in the city to select more than 20 varieties of landscaping plants suitable for the climate, like day lilies and hydrangeas.

"Adjustments in the acidity of the soil helps plants grow better, " said Huang. "Pocket parks are small but refined." 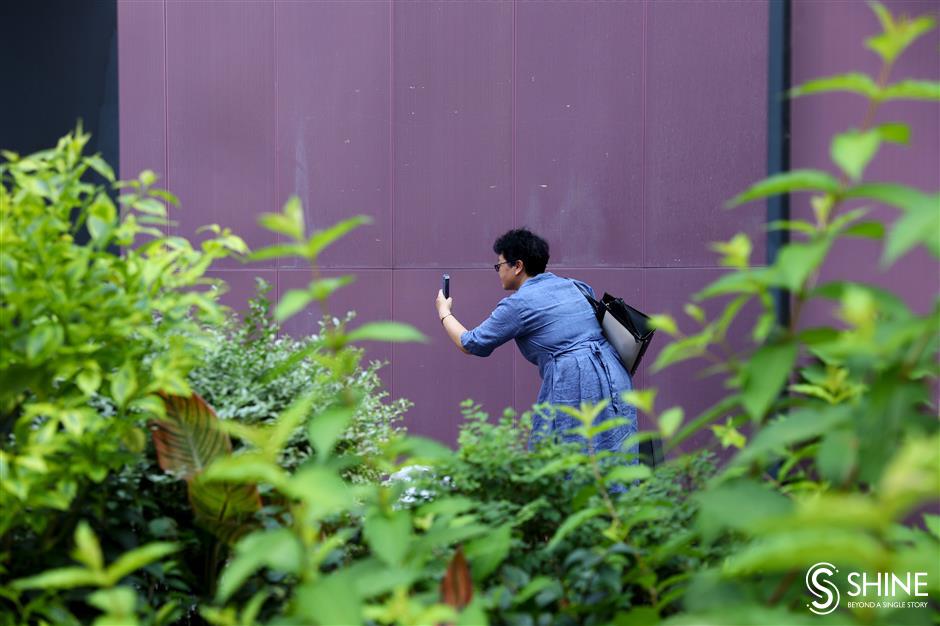 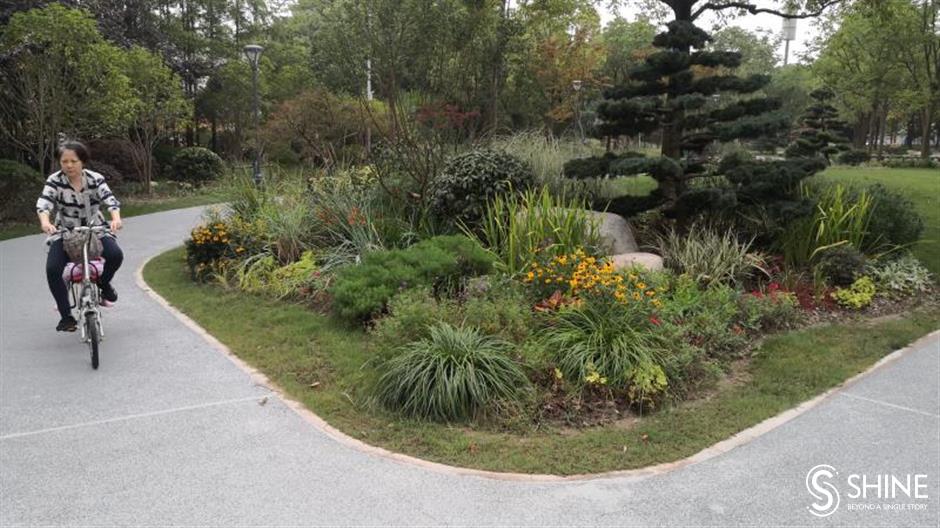 A resident cycles at Qingxi Garden in Minhang District. 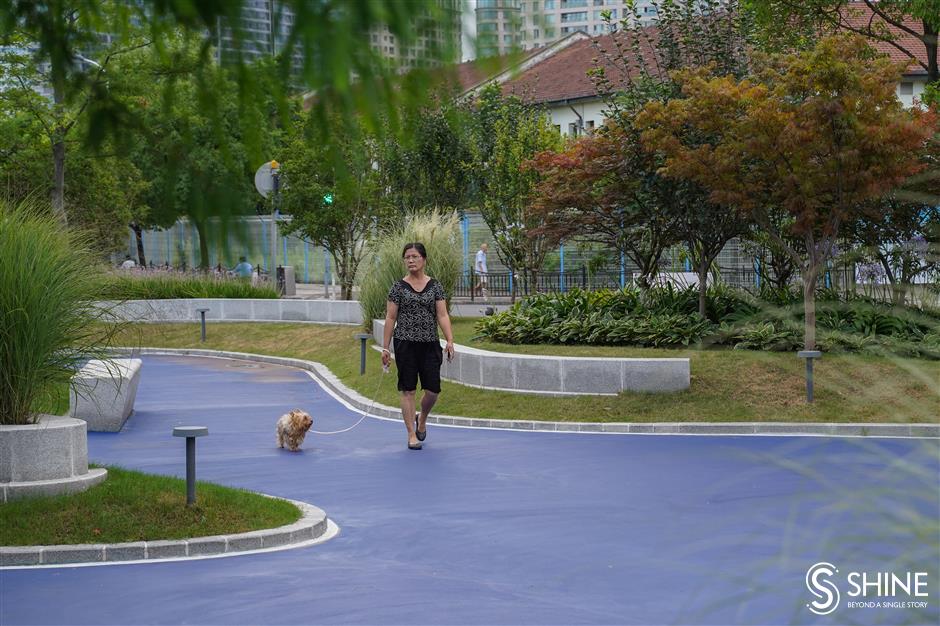 A resident walks a dog at Taidi Garden in Huangpu District.

In Minhang District, lush arbor along the Dianpu River was transplanted to make a more open, spacious park layout. A green corridor was created, stringing together several pocket parks and floral landscapes.

"In the past, it was difficult to get close to the riverbank,” said local resident Wang Shengxian. "And tall shrubs blocked the sunshine from lower-floor households. Nowadays, I can even fly kite in a pocket park."

In Jing'an District where vacant land comes at an even higher premium, a bit of creative thinking has gone into creating oases of green.

"This piece of land was spared during the Shimen Road renovation, and it involved using walls to ‘hide” utilities like overhead cables," said Xu Xinnong, director of the construction management at the Jing'an District Greenery Center. "A variety of red plum and maple trees feature there, creating a pocket of beautiful scenery."

Xu Fei, who works at a nearby company on Nanjing Road W., uses the park during breaks.

"I like taking a stroll or simply sitting and enjoying the environment,” she said. "The greenery really lifts my spirits and offers a welcome respite from the office.” 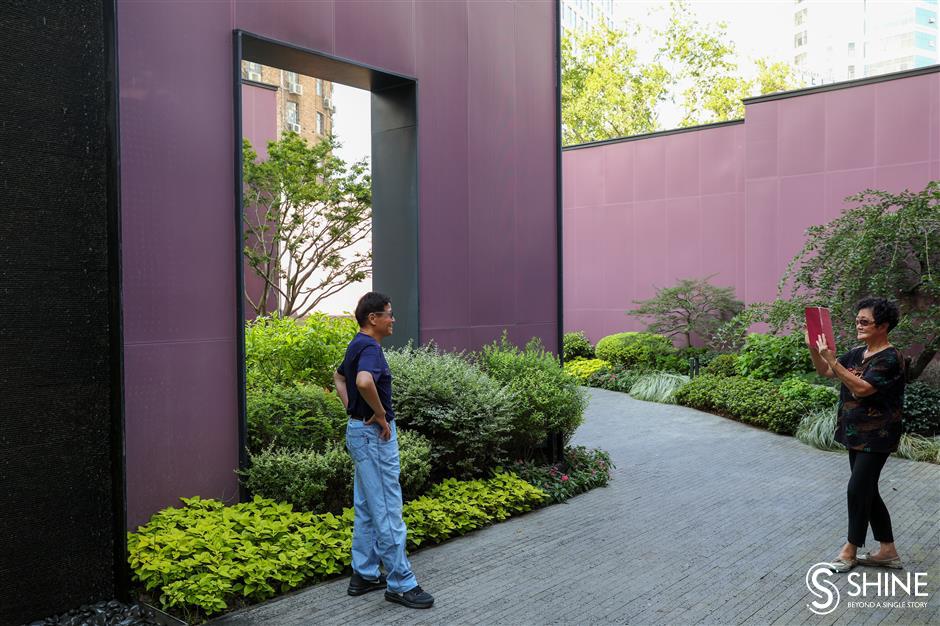 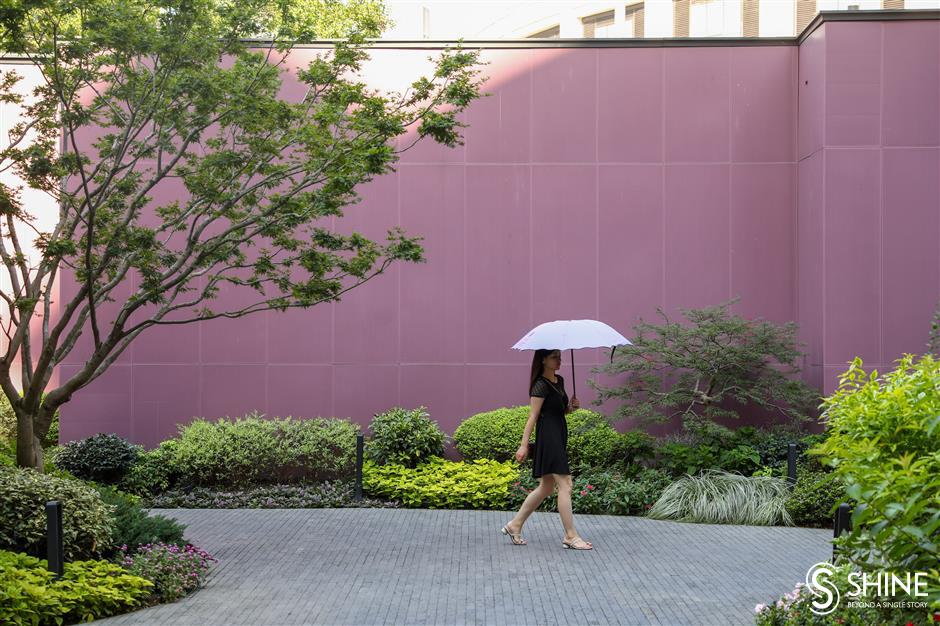 A woman walks at Shinan pocket park in Jing'an District.