Now there is more of Nanjing Road Pedestrian Mall to love 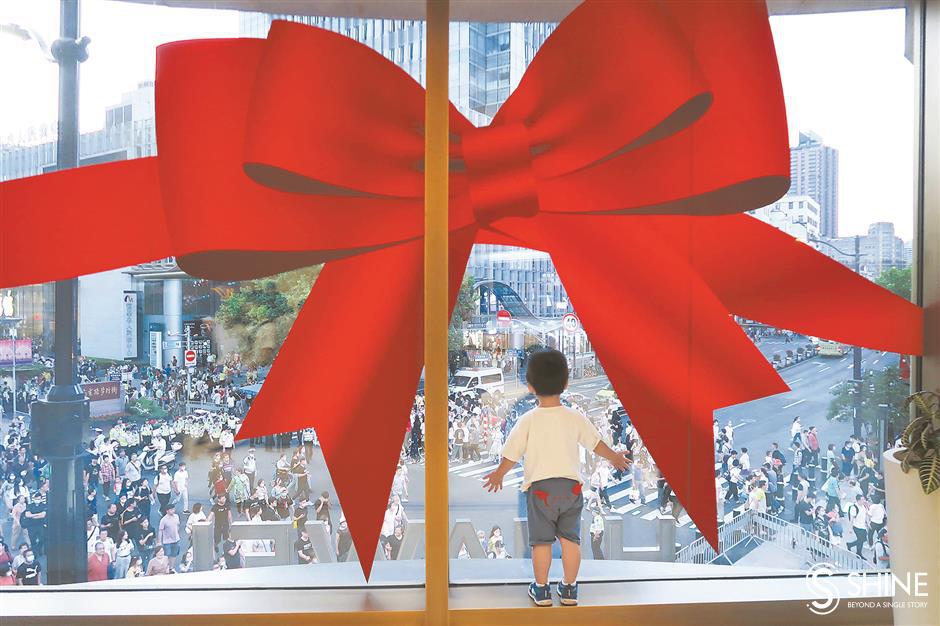 A boy overlooks the crowds on Nanjing Road Pedestrian Mall from the flagship Huawei store, housed in what was once the silk emporium Laou Kai Fook in the 1930s.

Chen, 68, stepped on the newly paved gray tiles of the mall last Saturday, the first day of this year's Shanghai Tourism Festival. He recorded the street’s recent makeover with his camera. And there was certainly plenty new to add to his portfolio.

If the curve of the Huangpu River at the Bund is the "bow" of Shanghai, Nanjing Road is like the "arrow" on an east-west axis. Two of the most popular attractions in Shanghai are now linked by an extension of the mall on the eastern side, creating a 1.5-kilometer stretch of culture, tourism and shopping.

"Prior to the extension, there were too many people and vehicles in the narrow roads of the area, and that made it very crowded,” Chen told Shanghai Daily. “Now that it has been broadened, we have a clear view of the Oriental Pearl TV Tower from the mall.” 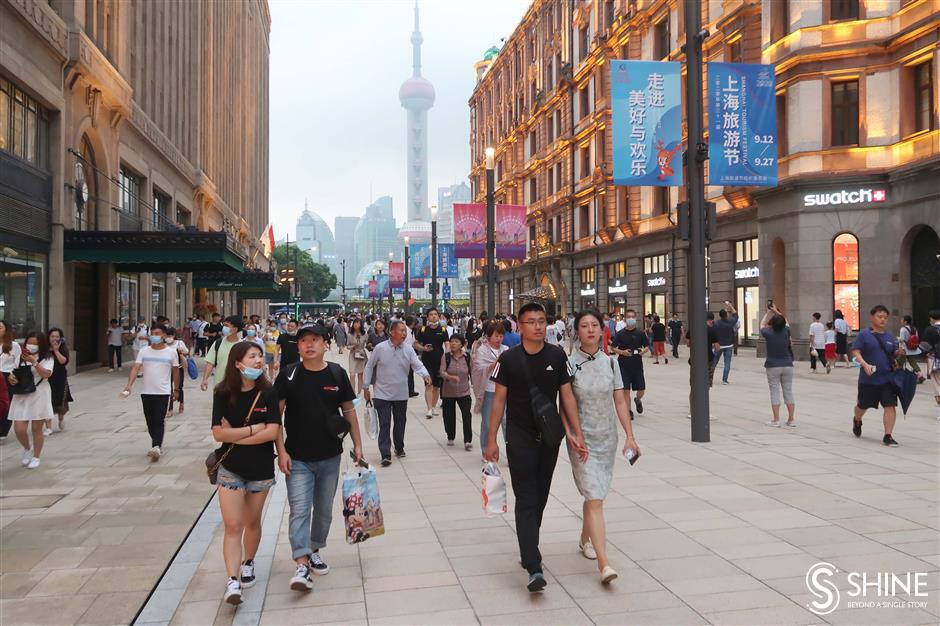 The eastern extension of Nanjing Road Pedestrian Mall allows people to have a clear view of the Oriental Pearl TV Tower now.

Dubbed China's "Fifth Avenue," Nanjing Road was called Park Lane in the mid-19th century, back when it was the nation’s first asphalt roadway. It carried Shanghai’s first car in 1901 and its first tram in 1908. The western end of the road was turned into a pedestrian mall in 1999.

The street long enjoyed distinction as Shanghai’s prime retail area, where people could find imported foreign goods alongside some of the city’s most venerated old-brand merchandise.

Some of the brands died out when overseas retailers were allowed into the city. Those that have survived are finding a new lease on life along the new eastern extension.

The century-old Ci’anli Building is a five-story, L-shaped structure in the Queen Anne style. The window pockets of the building were decorated with red brick frames or white arcades, while dormer windows jutted out from below a pitched roof.

A branch of time-honored Shanghai brand Taikang Foods has become a new tenant there.

At 3pm last Saturday, long lines formed outside the store to buy its specialty — meat-stuffed mooncakes. To cater to younger tastes, the shop has added a few modern popular food items and drink brands.

"We sell traditional brands like White Rabbit candies as well,” said Xu Mingxi, chief of the new branch. “The ground floor is a mixture of traditional and modern food, and the second floor has a Japanese gastropub and an Italian-style pizzeria. The third floor sells coffee and gelato."

The fourth floor houses a teahouse featuring the old Shanghai tea brand Wangyiji. Xu said the site was once a place frequented by famed Chinese writer Lu Xun. The old wooden stairs to the fourth floor were retained during interior decoration.

"As we all know, Taikang is a local brand with a long history,” Xu said. “But with customers becoming younger, we have to cater to their needs. That's why we opened this branch on the extension of the mall." 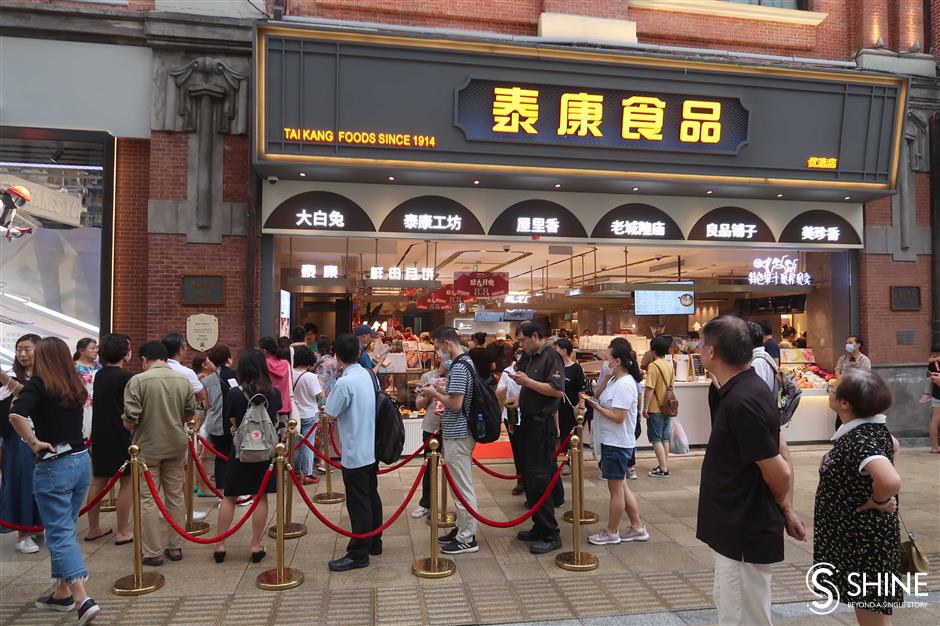 Long lines form outside the new store of of time-honored Shanghai brand Taikang Foods on the extension to buy its specialty — meat-stuffed mooncakes.

Next to the Taikang store, domestic sportswear maker Anta, a supplier to the 2022 Winter Olympic Games and Paralympic Games in Beijing, has established an Olympic-themed flagship store, with mannequins "skiing" in the show window.

According to Lu Yali, manager of the store, merchandise included standard sportswear and some products especially designed for the Olympics.

On the other side of the building four old Shanghai brands have opened a bar, cafe and eatery. Shao Wan Sheng is famous for pickled food, San Yang Sheng for dried foods, Lao Da Tong for edible farm products like fungi, and Huang Long Tai for tea.

"We started trial operation on September 8, and most of our old customers were surprised by this change," said Yan Sizhong, who works at Shao Wan Sheng. "We've sold pickled food for more than a century, but the young generation may not like that so much. So we are creating new foods to attract young diners."

The store has been refitted to include a bar, where patrons can enjoy a glass of bear and Iberian ham.

On the ground floor, people can buy rice drinks and rice ice cream, and some rice snacks and rice skin care products. For those who want to have a meal, there are set menus with six varieties of Shanghai cuisine. The food is served on small glass plates set on a wooden tray, resembling the appetizers of the traditional Japanese meal kaiseki ryori.

The dishes will change with the seasons, said Zhang Yuhe, who works at rice store.

"We developed new varieties of cakes for young people, such as a cat-shaped cake,” said a shop assistant at San Yang Sheng. “In the past, we mainly catered to older customers.” 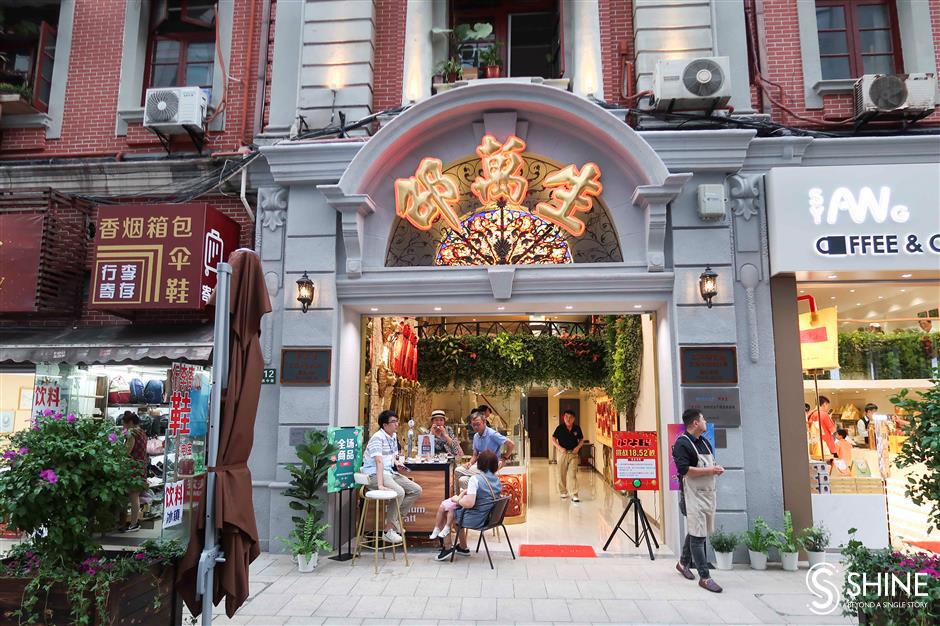 Shao Wan Sheng, an old Shanghai brand famous for pickled food, has refitted its store to include a bar, where patrons can enjoy a glass of bear and Iberian ham. 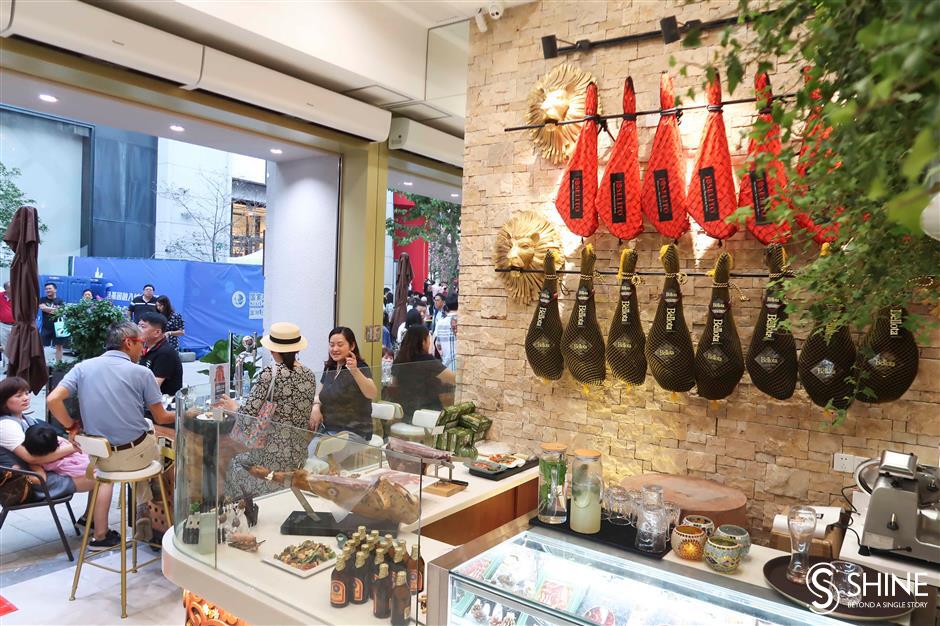 Shao Wan Sheng, an old Shanghai brand famous for pickled food, has  refitted its store to include a bar, where patrons can enjoy a glass of bear and Iberian ham.

China’s first 24-hour convenience store Xinghuoriye, which first opened in 1968, also has a new branch on the mall extension.

"We have local specialties of Shanghai and products foreigners may like, such as Chinese tea,” said Hu. “We also have imported food, a delicatessen and simple breakfast for locals."

The store offers conveniences beyond food. It will help people book a taxi, deliver a parcel or charge a mobile phone. 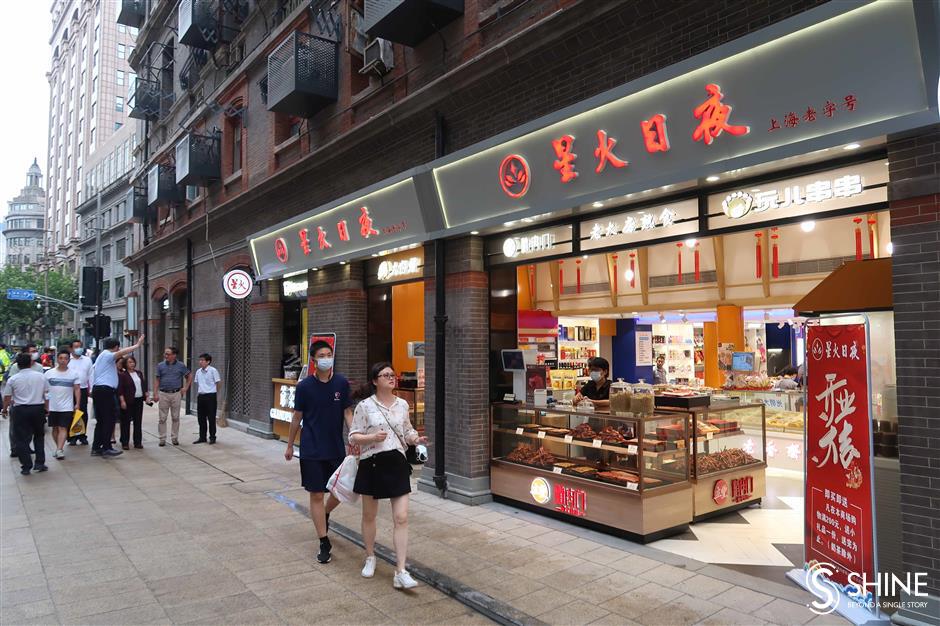 China’s first 24-hour convenience store Xinghuoriye, which first opened in 1968, now has a new branch on the mall extension.

Xinghuoriye's neighbor is a shop operated by the Shanghai No. 1 National Musical Instruments Factory. Traditional Chinese instruments are displayed in a brightly lit interior, and visitors are encouraged to try and play an instrument.

"We aim to sow the seeds of national music in people's hearts, especially in children,” said manager Huang Ting.

The factory's chamber orchestra, the first one of its kind in Shanghai, will give performance in the store.

There are several newcomers making the mall extension their home. 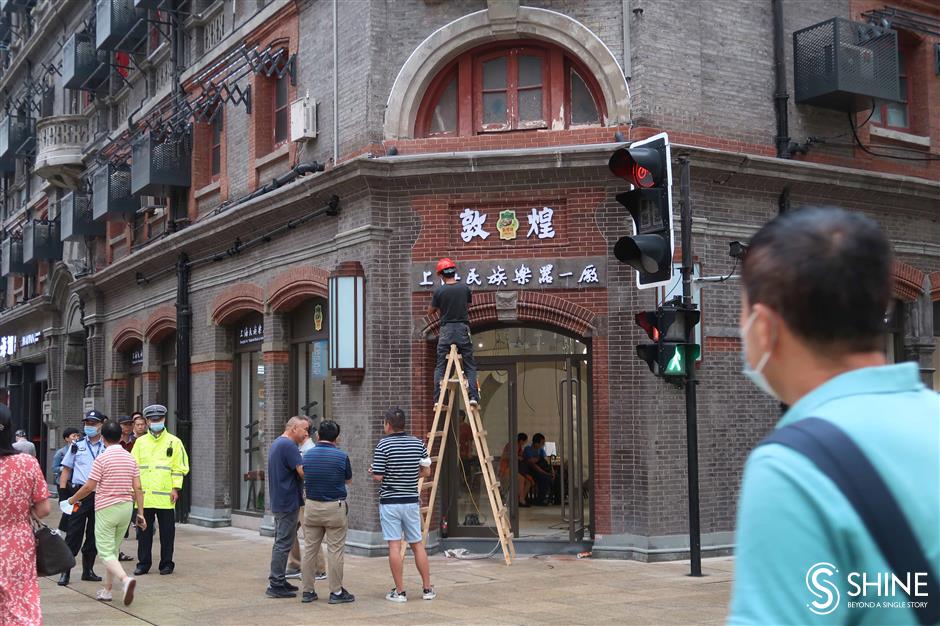 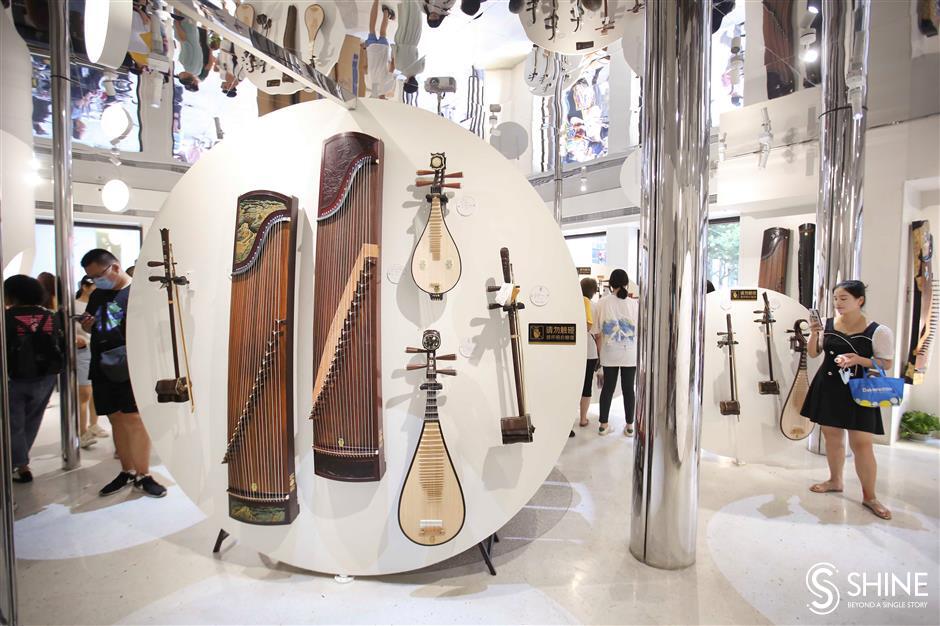 In a shop operated by the Shanghai No. 1 National Musical Instruments Factory, traditional Chinese instruments are displayed in a brightly lit interior, and visitors are encouraged to try and play an instrument.

Kakao Friends, a spinoff design and merchandise company from Korean messenger app "Kakao Talk," has opened its first China outlet there. The store features sculptures of emoticon characters, which are popular among young people.

"We've done a lot of research before deciding to open this shop,” said James Park, director of offline retail with Kakao IX China. "It’s an ideal location that hosts the city’s tourism festival and welcomes large numbers of locals and visitors."

Park said the Chinese fans of Kakao Friends lined up outside the store very early on the morning the shop opened.

“We plan to open more stores in Chinese cities,” he said.

Likewise, Italian pastry brand Rinaldini has opened its first China store on the extension, offering gelato, cakes, drinks and take-away salads, burgers and sandwiches. Later, meals will be served on the second floor, said Chen Xinyan, manager of the store.

She said Italian staff has to postpone their arrival in Shanghai due to coronavirus restrictions. Currently, Chinese employees are assuming their roles. 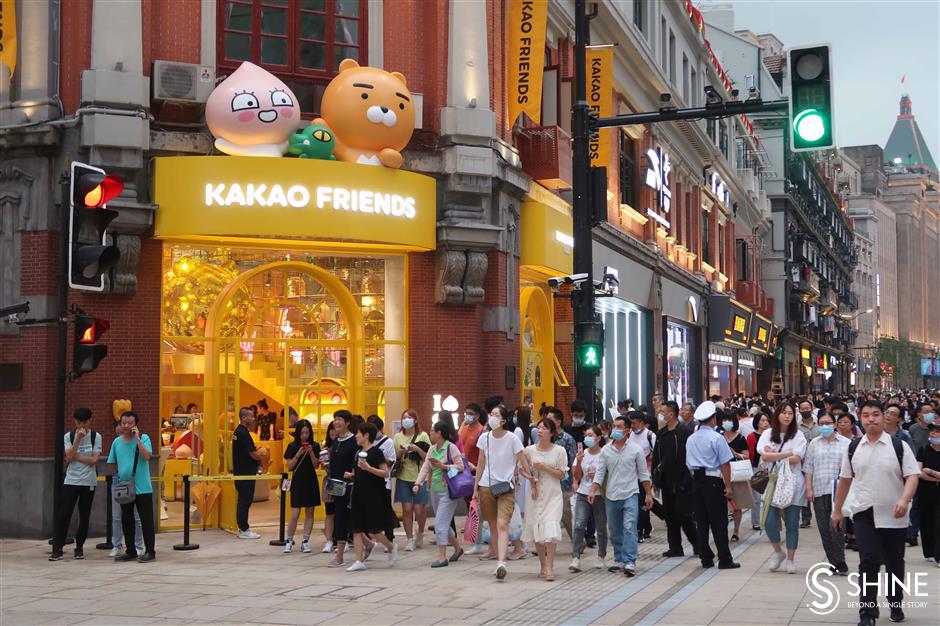 Kakao Friends, a spinoff design and merchandise company from Korean messenger app "Kakao Talk," has opened its first China outlet on the extension.

At 7pm last Saturday, a replica of the city's first electric-arc lamppost, dating back to 1882, lit up a plaza on the extension near Jiangxi Road M. to celebrate the new pedestrian street.

Lights of the buildings along both sides of the extension and lampposts form a "golden belt" for visitors to appreciate the beautiful night views and walk to the Peace Hotel at the end of the extension.

Two sisters visiting from Guizhou Province were enchanted by the scene.

"This is a prosperous place, with large crowds and convenient transport,” said one of them. “Now it's easier to get to the Bund, and traffic police are present at every crosswalk, making us feel very safe.” 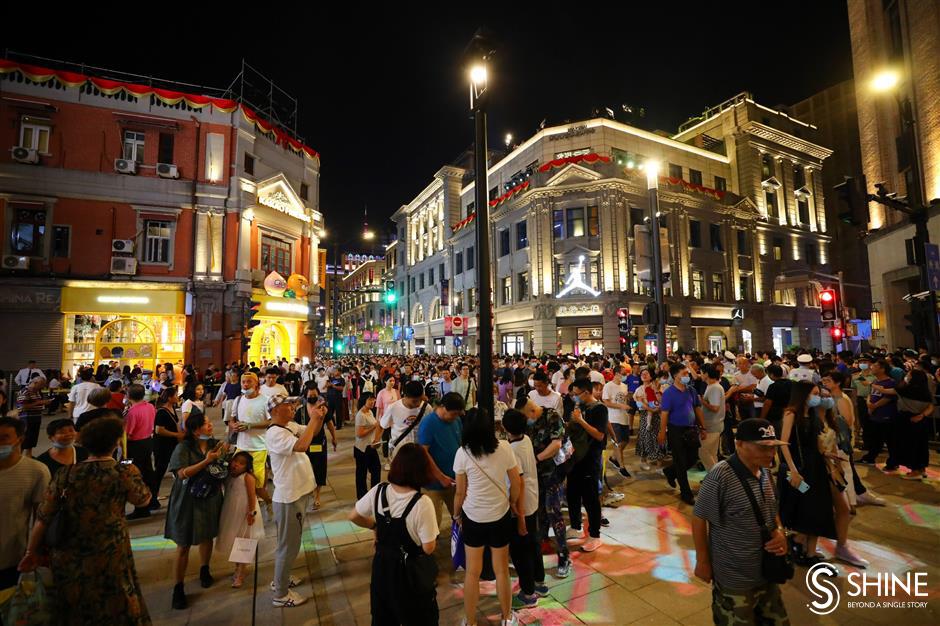 China’s first electric-arc lamp was lit by the Shanghai Electric Co on Nanjing Road in 1882, marking the beginning of the city’s modern development. A replica of that lamp has been erected on the original site.

The Shanghai New World Daimaru department store, the largest commercial complex on the eastern extension of Nanjing Road Pedestrian Mall, attracted nearly 90,000 consumers on the first day of the tourism festival, up some 54 percent than the same time last year.

New World Daimaru extended its opening hours overnight to accommodate the crowds and is reporting daily sales as high as 34.6 million yuan (US$5.11 million).

“The coronavirus pandemic has particularly stricken restaurants and tourism,” said Wang. “But while other tourist destinations lay dormant, Hainan has been thriving and flight tickets and hotel rooms are hard to come by.”

Hainan, it should be noted, became a duty-free shopping island on July 1 as part of broader development of the tropical province as a free trade port.

“Duty-free shops are crowded with travelers there,” Wang said.

Shanghai’s status as the “shopping paradise” of China is losing some of its luster. The coronavirus outbreak turned many people to shop more online. Although malls in the city have reopened, some are reporting reduced foot traffic.

The millions of Chinese who normally travel — and shop — abroad have been largely homebound since the epidemic began. If shopping malls in Shanghai were duty-free, Wang said, would-be travelers might shop more here instead of waiting for access to duty-free bargains at airports to resume. 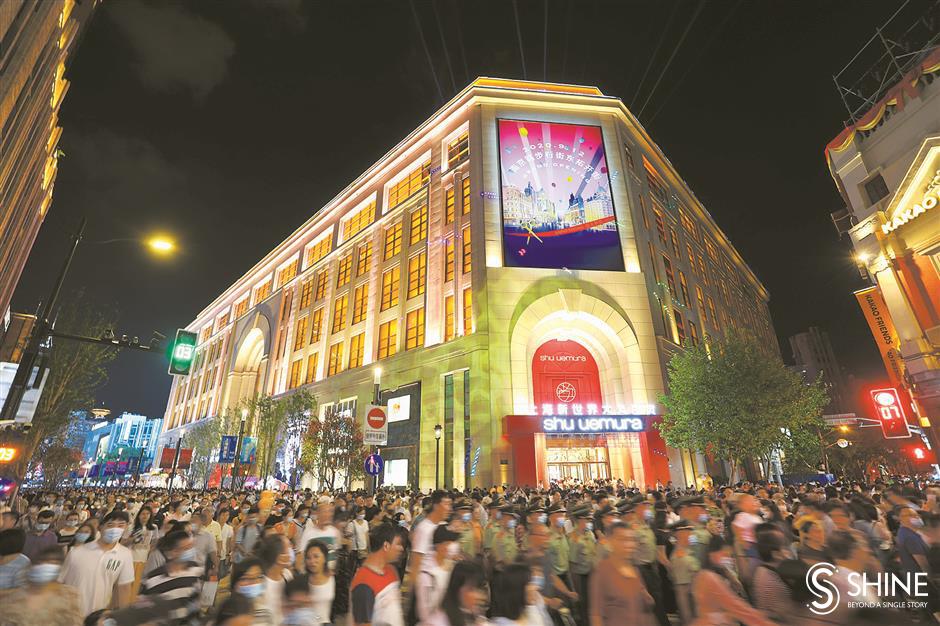 The Shanghai Tourism Festival is doing its bit to publicize the stories of historical buildings along Nanjing Road and other areas of the city.

The Shanghai Administration of Culture and Tourism said more than 2,400 historical buildings and protected heritage sites in Shanghai have QR codes that people can scan for more information.

Experts on Shanghai architecture stress that heritage protection for old buildings relies on public participation to save them from the bulldozer. Why does old matter? Because it is a present-day mirror on the past.

The city’s “Stories of Shanghai Architecture” campaign is not only about QR codes, he said. Interest in historical buildings can be promoted by talks, forums, publications, artworks, performances and tours.

“Nowadays, many young people in Shanghai are not familiar with the city’s history,” Zhou said. “We have to pass our culture on to them, especially to children.”

And also to foreign visitors.

“Once I led a group of foreigners along the Bund and told them that Pudong on the opposite shore of the river had been developed within just three decades,” he said. “They were all really surprised about such rapid growth.”