Welding talent and determination, a woman succeeds in male-dominated job 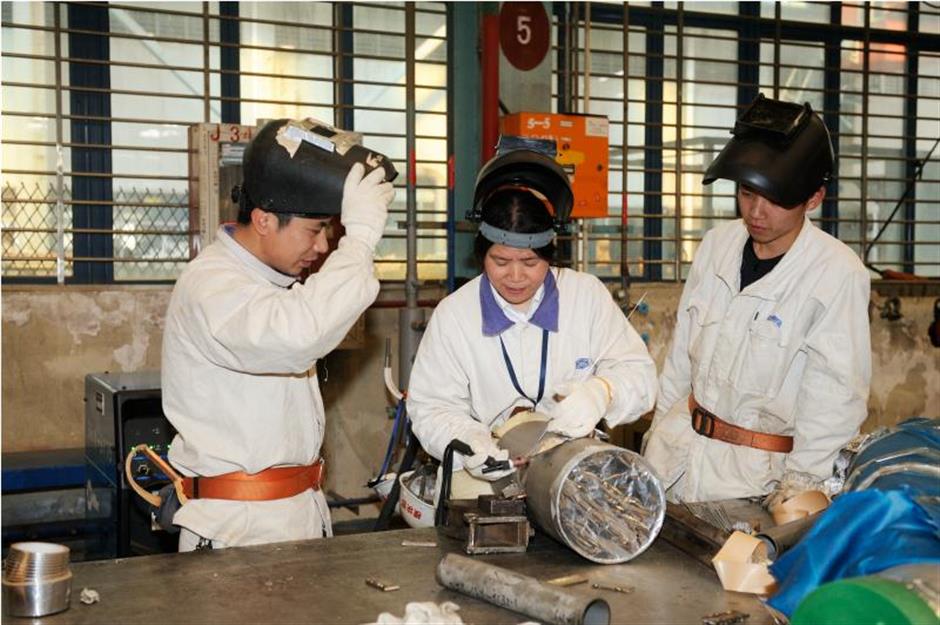 Zhu is a bit of an oddity in the realm of shipyard welding. Not only is she a woman working in a man’s world, but she is also proof that someone can rise from grassroots job to senior ranks with determination and hard work.

In 1998, 24-year-old Zhu left her young child with relatives in her hometown in Shandong Province and, with her husband, moved to Shanghai. She took a job at the Jiangnan Shipyard on Chongming Island in the city.

The shipbuilding industry is traditionally a male realm. She was assigned to janitorial duties.

“I used to be the only female handyman in the entire welding team,” she said. “During breaks, I found discarded materials to use in practicing welding skills. Some workers teased me about my thin body and awkward movements.”

She had the last laugh. Her male co-workers were astonished to find that Zhu’s welding skills had grown by leaps and bounds in just six months.

“I got up before dawn every day and used all my available free time to practice those skills,” she said.

Zhu was soon able to take on lead tasks within the team. Three years later she became the core of the welding team and won an award as an “Outstanding Young Migrant Worker.” She was known for her meticulous work ethic and ability to assess and resolve problems.

Most people would consider welding a rough job. Zhu sees it more imaginatively. She looks at work as “embroidering” on a steel pipe or doing a surgical procedure.

“Insiders often compare pipelines to the blood vessels of a ship,” she said. “They carry oil, water and electricity throughout the ship. A small problem in a pipeline can paralyze a ship’s operation.”

She added, “A welder is like a surgeon tending to the ‘blood vessels’ of ships. Whether those vessels are well built or not is an important factor in the quality of a ship's construction.” 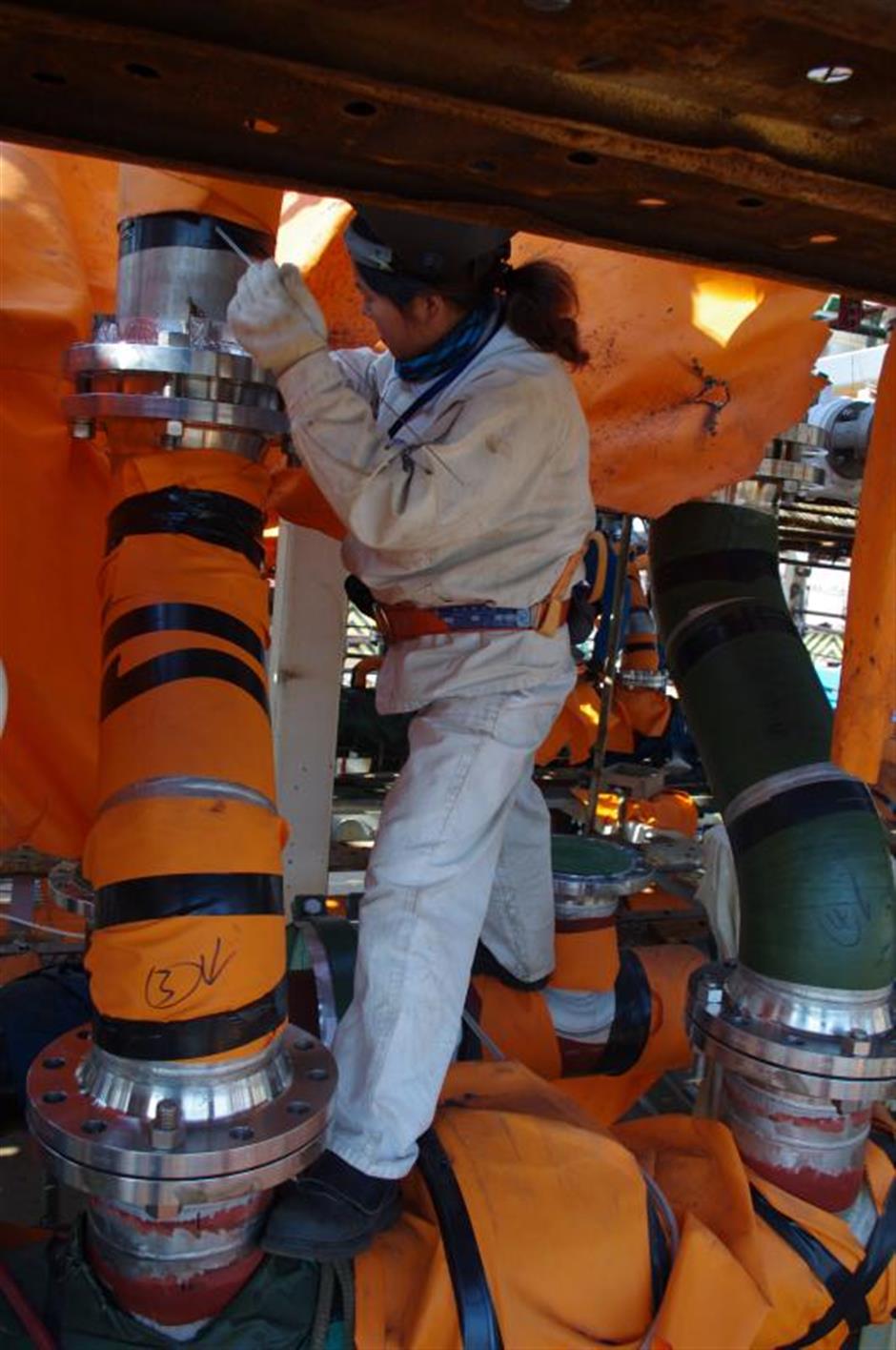 Zhu examines the functioning of pipelines inside a ship.

Strict standards are required in welding, and the results are inspected by X-ray after completion. Zhu has had her work X-rayed as many as 4,000 times in one year, with a pass rate of 98.5 percent.

The team developed an effective welding plan with special tools to address problems in stainless-steel corrugated plates used in the gas carriers.

The quality of that welding later helped the company secure contracts on a series of ships. 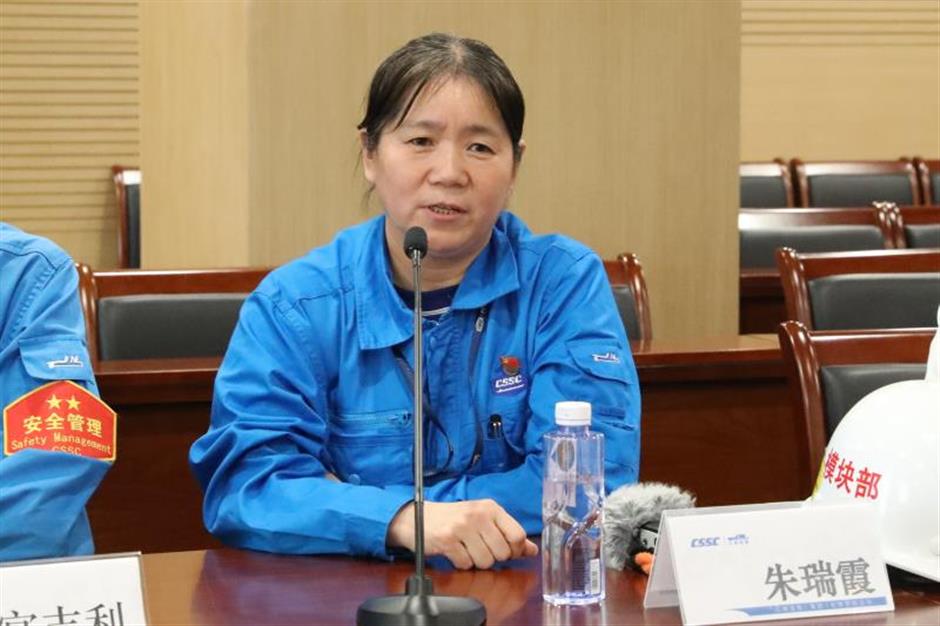 Zhu shares her expertise in welding during a seminar held at Jiangnan Shipyard.

The only thought in my head was, and still is, to reach proficiency of what I do. It hasn’t changed since the first day I came to work in the factory. I just want to try my best to complete the work assigned to me.

From apprentice to teacher

In June 2016, a training studio named after her was established at the shipyard. It draws together welders, copper workers and fitters to push for innovation and nurture new talent.

The workshop has mentored 26 apprentices, many who went on to become senior workers and team leaders and take top prizes in welding competitions.

The Jiangnan Vocational and Technical School has also hired Zhu as a part-time instructor in welding.

“Sometimes when I ask her to go out with me for a meal, she says she can’t because of some task at the factory or a young apprentice waiting for advice,” said Zhu’s husband Cheng Jianhua.

In 2017, Zhu won the National Labor Medal and the Shanghai Ship Craftsman title. In 2019, she was named a "model worker” and also one of the “most beautiful people of Chongming.” 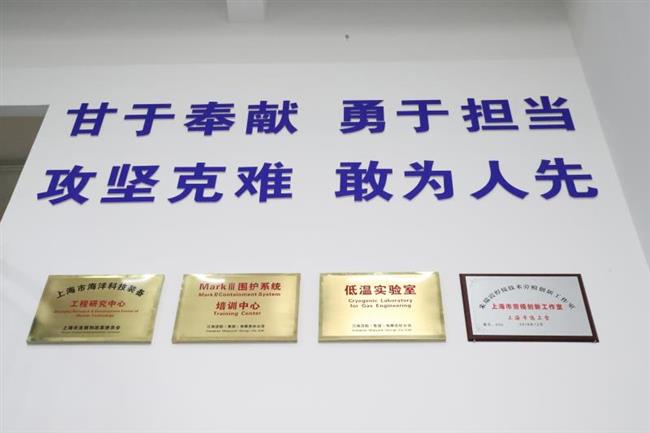 The entrance of Zhu Ruixia Innovation Workshop is embellished with inspiring slogans calling for dedication and responsibility.

Volunteer for the community

During the novel coronavirus epidemic this year, Zhu replaced her welder’s helmet with an anti-viral face mask to do volunteer work in her community.

She donated money and materials to her neighborhood committee and helped in epidemic prevention and control efforts, including taking body temperatures and registering people returning to Shanghai.

She also did community patrols, reminding residents — especially shipyard workers — to keep travel to a minimum and abide by all health and safety rules.

“Many migrant workers in my community and at the shipyard worked in the front line in the fight against the disease,” she said.

Her son, who has joined his parents in Shanghai, is following in his mother’s footsteps, taking a job in shipyard management after earning a bachelor’s degree in marketing last year. He secretly applied for the job without telling his parents.

“When he was in elementary school, he used to be ashamed of my job,” Zhu said. “I took him on visits to the shipyard, but he showed no interest. So I didn’t pressure him and just let him get on with his life. Whether I ultimately inspired him or not, I do not know.” 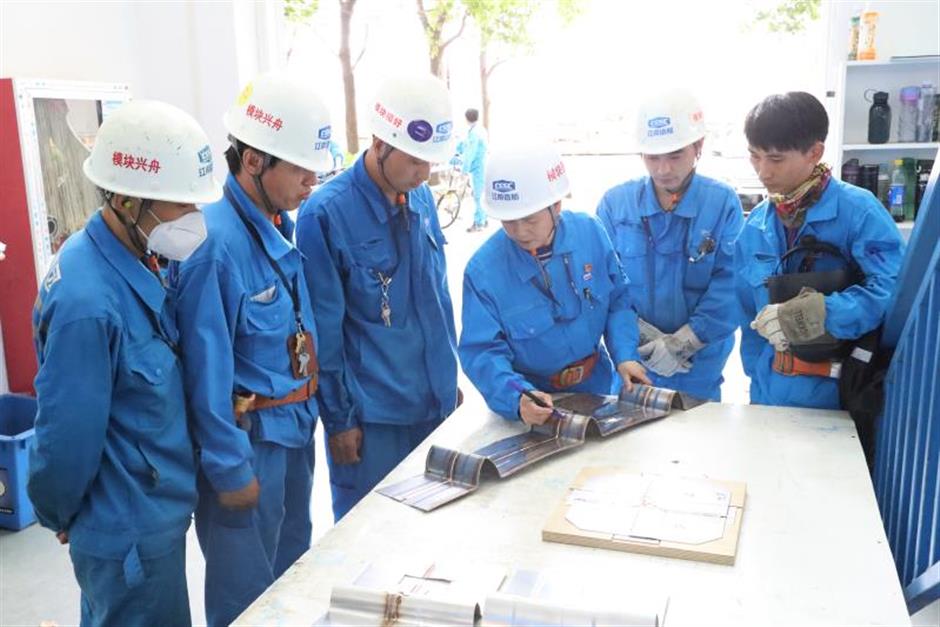 Zhu (third from right), along with her fellow workers from the workshop, studies a welding plate at Jiangnan Shipyard.