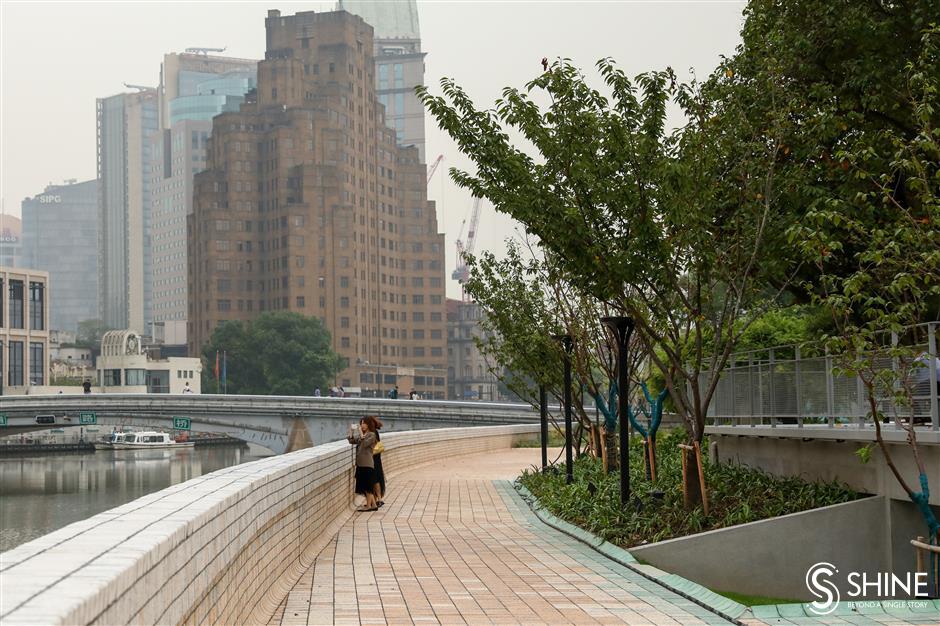 People enjoy a bit of leisure along the Suzhou Creek. 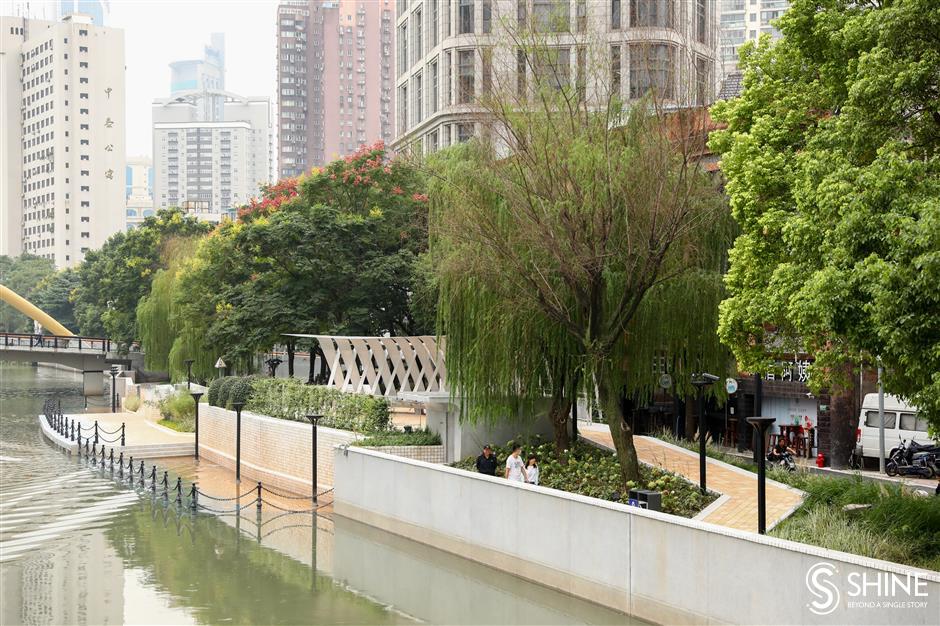 Buildings along the Suzhou Creek have experienced a facelift. 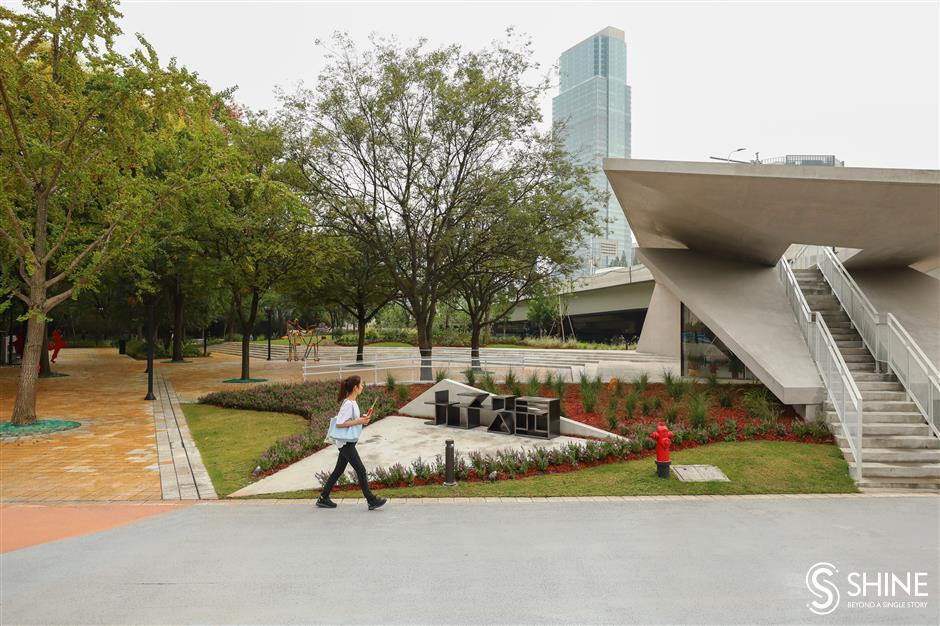 The area along the Suzhou Creek has a tidy and beautiful environment.

Shanghai is being spruced up for the upcoming China International Import Expo, 40 days away to return for its third year.

The city has mapped out 95 tasks involving authorities and key enterprises and 2,946 tasks at the district levels which are related to public sanitation and the environment. Among them, about 87 percent have started and nearly 60 percent have been completed, according to the Shanghai Greenery and Public Sanitation Bureau.

"The target is a 'brilliant view' along both banks of the Huangpu River, a tidy environment at key areas that are clean enough to 'sit on the ground,' 'beautiful blocks' enabling a pleasant stroll near accommodation spots of guests. And the ultimate goal is supreme clean environment across the city," said Deng Jianping, director of the bureau.

High-standard sanitation is conducted along the Huangpu River and Suzhou Creek, as well as at key areas, the bureau announced.

The refined sanitation standard of “clean enough to sit on” has been extended to the newly opened eastern extension of the Nanjing Road Pedestrian Mall with a combined approach using advanced road-sweeping machines and sanitation workers, the bureau said. 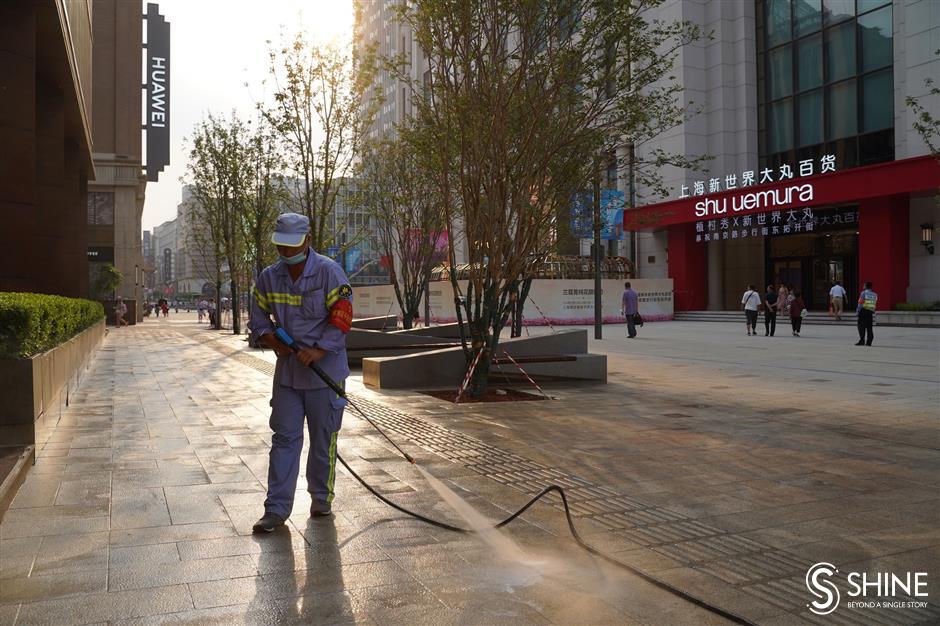 A sanitation worker cleans the eastern extension of the Nanjing Road Pedestrian Mall. 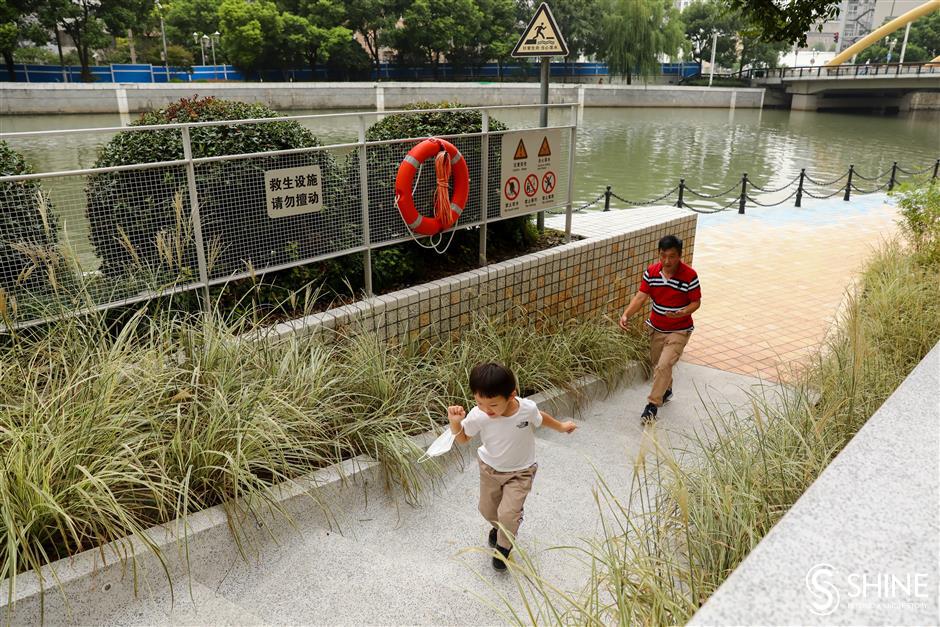 A child plays along the Suzhou Creek.

During large events such as the ongoing Shanghai Tourism Festival and holidays, flexible cleaning arrangements and schedules are taken based on visitor traffic, the bureau said.

"Huge traffic creates a lot of garbage, mostly from food, and we are cleaning the street 24 hours per day to ensure a pristine environment," a sanitation worker surnamed Cui said.

A sanitation worker surnamed Li was cleaning the road with a washing machine.

"We have two such washing machines used on the extension, and it's very efficient for washing away dirt on the street," Li said. "It can reach small areas and corners."

"At night, when there are fewer tourists, we use high-pressure flushing vehicles to make the street as clean as possible," he said.

Liu Chunyan, a cleaner on the street, said she encounters a more friendly environment now.

"In the past, pedestrians avoided me when I was working with the big broom and dust was flying. But now they pass by me directly and some even take a curious look at the cleaning and sweeping machines," she added. 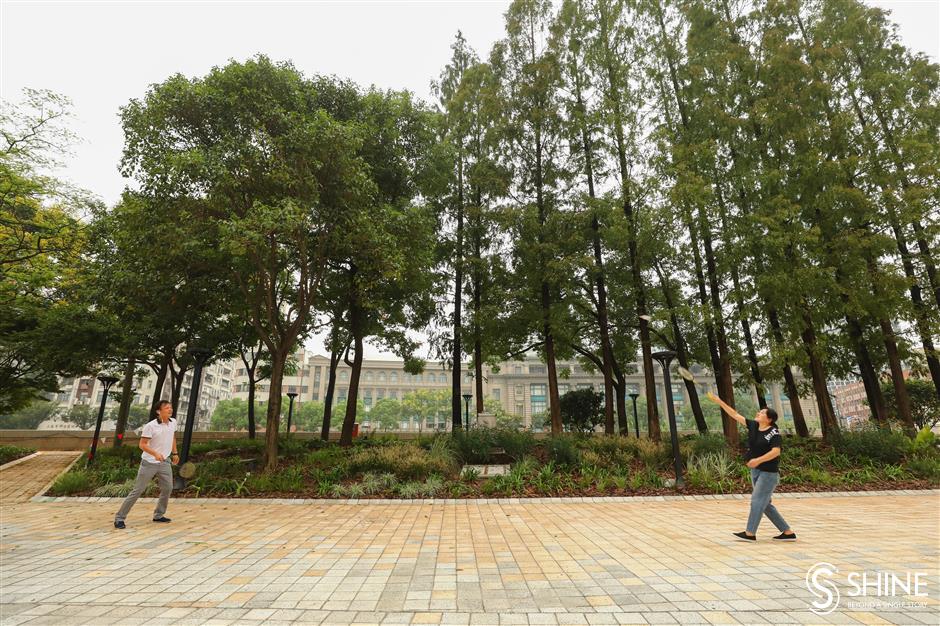 People enjoy a bit of leisure life along the Suzhou Creek.

The change of environment is already noticeable.

“I have a pleasant mood when walking on the extension,” said Yu Tingya, an office worker taking a stroll during lunch break.

“The pedestrian street used to leave visitors an impression of being dirty and disorderly (because of heavy traffic), but it has improved a lot now,” she said. “I see several sanitation workers toiling on the street, and they help create a sound environment.”

Some cleaning machines have more than 20 functions such as weeding, sweeping snow, spraying water and washing.

"We plan to introduce such advanced machines to more areas like the Bund and People's Square in the future," said Fan Zhihua, deputy general manager of Shanghai Xinyi Environment and Sanitation Service Co Ltd, which is in charge of sanitation on the extension.

Efforts are rolling out across the city to reach the target of 70 areas and roads that are "clean enough to sit on" this year with the application of intelligent technologies, greenery authorities said. 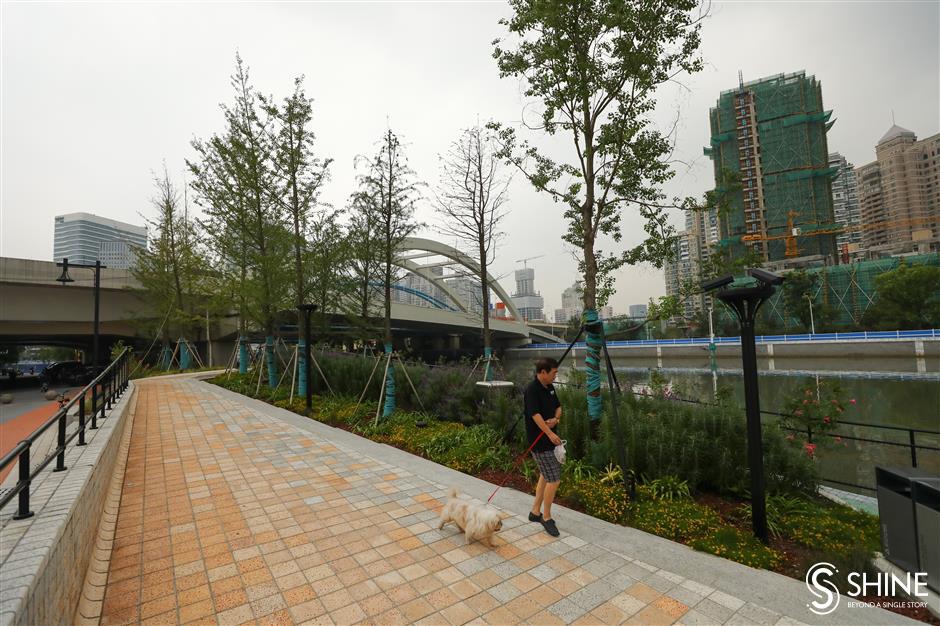 A resident walks a dog along Suzhou Creek.

The management and service level of the city's public toilets will be further lifted, and they are ordered to stay open around the clock or extend opening hours.

Free toilet paper is provided at some of the city's public toilets with hot water available for hand washing in winter, the bureau said.

On the 15th day of each month, citywide clean-up campaigns are conducted.

As of the end of August, the city had conducted 830 such washing-up campaigns, involving nearly 110,000 sanitation workers and more than 15,000 sanitation machines, according to the bureau.

"The campaigns cover specific areas with high traffic but poor sanitation, and the aim is to improve their overall environment and appearance," said Wang Yongwen, director of the sanitation management department of the bureau. 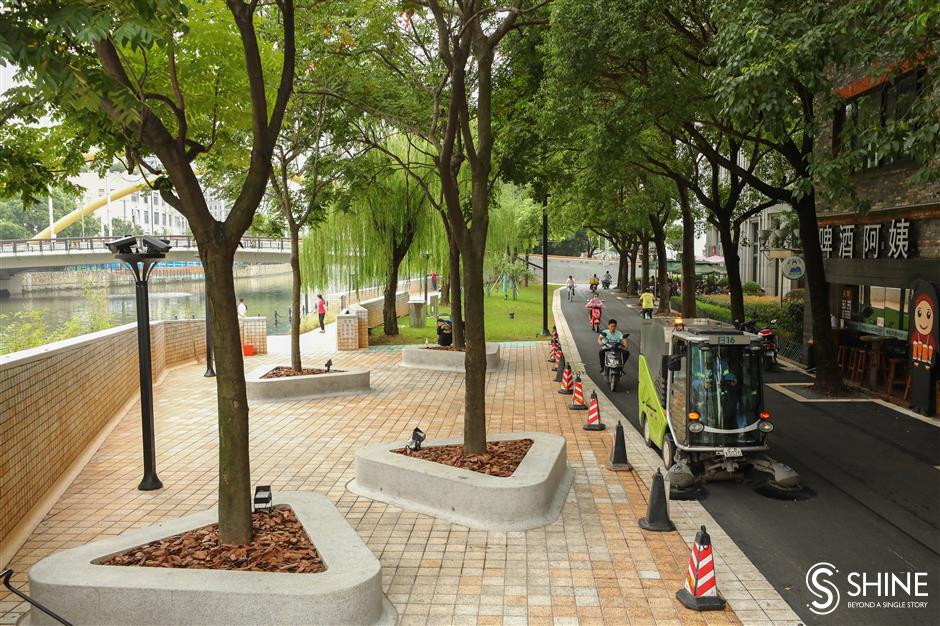 The bank of the Suzhou Creek has a tidy environment.

During these campaigns, about 600 areas and spots with poor sanitation were cleared, and 5,462 blind spots and dead corners were cleaned, according to the bureau. A total of 1,433 tons of trash were cleared during the campaigns as well.

Greenery authorities are also decorating the city with flowers for both the eight-day National Day holiday and the third CIIE.

About 340,000 pots of flowers in red and yellow have been prepared for the holiday, the bureau said.

At People's Square, a massive flower bed is created before the holiday, which reflects the unyielding spirit of the Chinese people and their longing for a happy life, the bureau said. 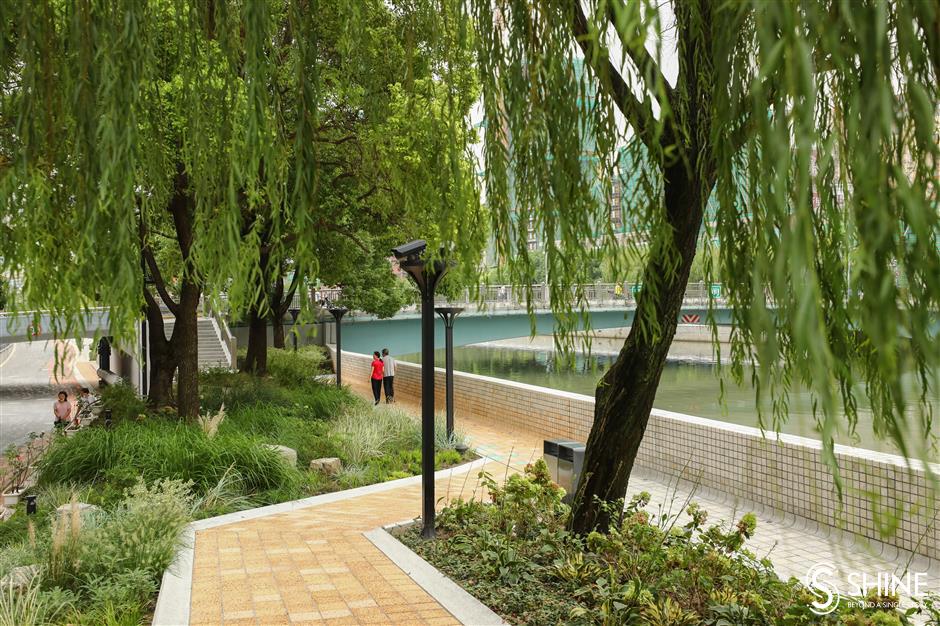 The bank of the Suzhou Creek has a tidy environment.

The landscape illumination project of the Huangpu River has been finished overall, and plans for landscape lighting projects along both banks of the Suzhou Creek, on the Yan'an Elevated Road and South-North Elevated Road have been drafted.

A number of environmental improvement projects for Suzhou Creek have started, with dirty, disorderly and poor facades; random installation of external air-conditioning units; and old and ugly signs of shops particularly targeted, the bureau said.

Facelift plans for 54 buildings along the Suzhou River have been worked out to ensure they have clean walls and simple, safe shop signs, according to the bureau. 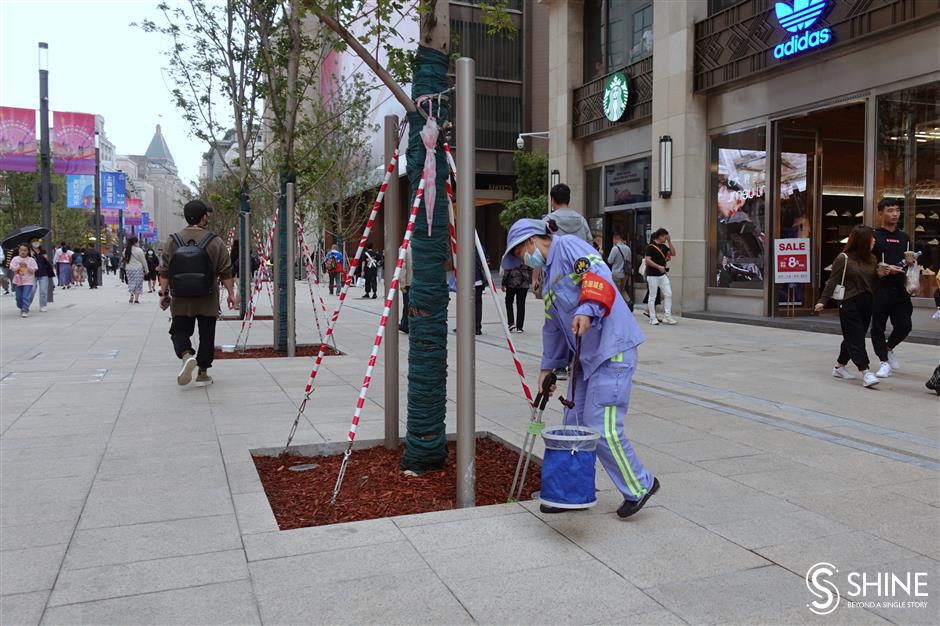 A sanitation worker uses a clamp to clear trash on the eastern extension of Nanjing Rd E.

Construction on a new public green space on Chang'an Road in Jing'an District is scheduled to be completed in October.

The city's "beautiful block" project has significantly improved the city's appearance and environment, the bureau said.

Shanghai has created about 240 beautiful blocks and improved about 14,000 public facilities in the project.

About 2,700 sign boards have been dismantled, and about 30,000 shop boards were upgraded. More than 6,600 street greenery landscapes have been created.

"The project highlights the exploration of haipai (Shanghai-style) culture, history and the essence of the city, and the satisfaction level of residents," said Deng.

New urban renewal projects have started along Shanghai's nearly-century-old Wuyi Road in Changning District to restore its history and culture while opening up more public space. 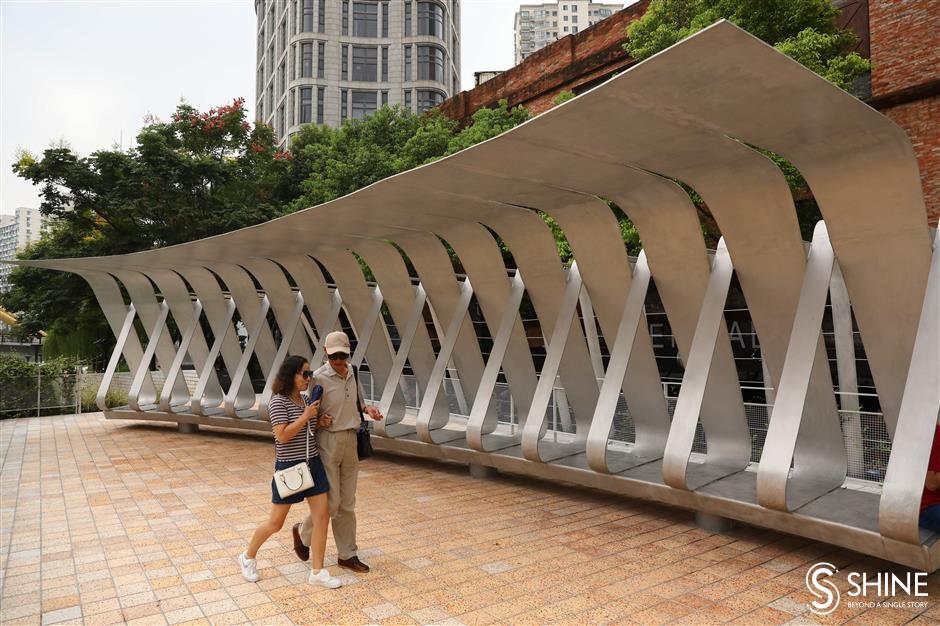 People enjoy a bit of leisure along the bank of the Suzhou Creek.