Toys that teach the intricacies of ancient Chinese construction 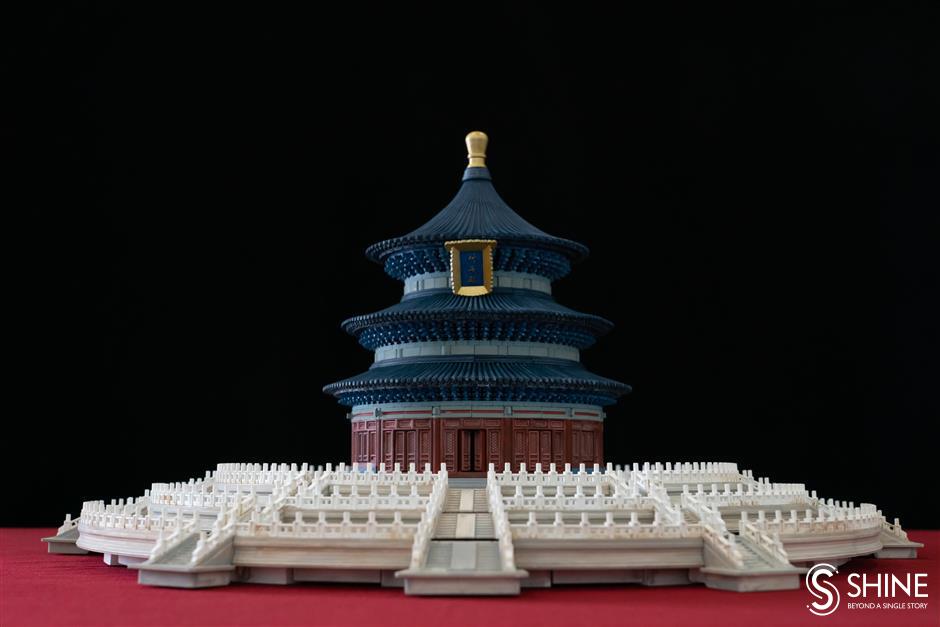 Wang Zhenhua, who rose to national prominence for miniature replicas of ancient structures made without using any nails or glue, has developed a building-block toy kit to introduce children to traditional Chinese mortise-and-tenon joinery, called sunmao.

The Shanghai resident, from Minhang District, is famous for his accurate model replicas of the 1,400-year-old Zhaozhou Bridge, the oldest standing arch bridge in China, and the Hall of Prayer for Good Harvests in Beijing, a six-year effort he calls a masterpiece.

The prayer hall was built on a scale of 81:1. The first toy model kit he made in collaboration with an arm of the electronics manufacturer Xiaomi is on a scale of 200:1, with nearly 900 components.

"The skills of ancient workers ensured that a house built with mortise-and-tenon joinery would never fall,” said Wang, noting that the technique of sunmao dates back 7,000 years.

The model kit, referred to as the “Chinese Lego” by local media, has been praised for its infinite building possibilities. Wang said he plans to offer more traditional Chinese buildings in the toy brand.

"Sunmao has no fixed structure and people can create their own locking ways," Wang told Shanghai Daily. "It's a wisdom of the East. It's a very complex engineering system as vast as the sea."

He added, "It is embedded with old Chinese philosophy, such as the harmony between man and nature. Although we have many variations of sunmao inherited from our ancestors, such as that used in furniture from the Ming (1368-1644) and Qing (1644-1911) dynasties, the idea of sunmao goes far beyond that. It's a bit like the relationship between human beings — sometimes we have to keep away from each other, but at other times, we have to face things and bear them together." 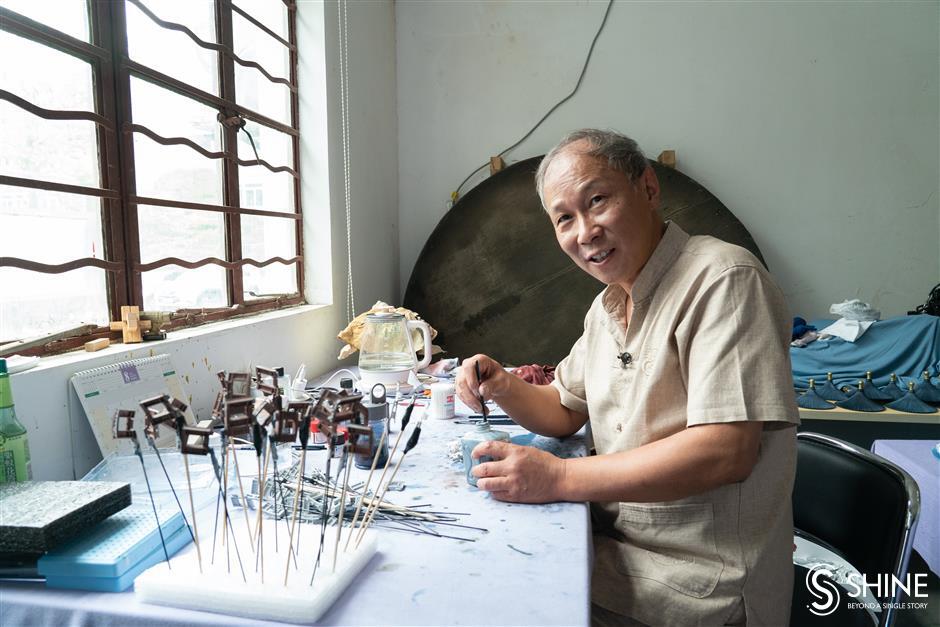 Wang Zhenhua mixes colors to paint the roof components of his toy model at his workshop in Minhang District. 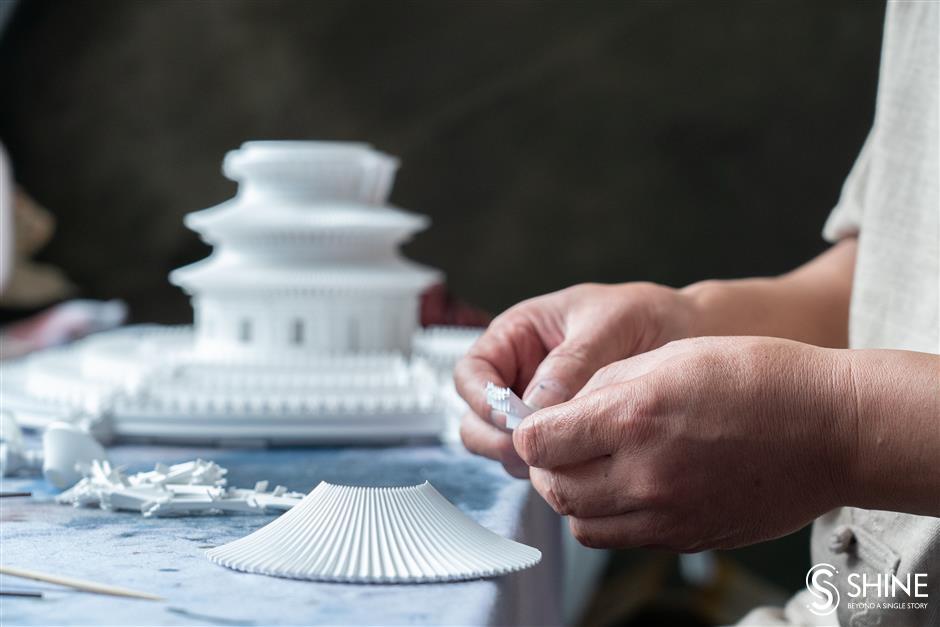 Wang makes a tiny component of his toy model kit.

Born in 1958, Wang fell in love with ancient buildings as a boy. During his childhood, his family lived next door to a carpenter, and Wang played with the wood shavings. After graduating from middle school, he learned carpentry and the skills of restoring ancient buildings on his own. A few years later, he familiarized himself with nearly all mortise-and-tenon joinery systems.

After graduating from college, he worked as an engineer but never stopped reading books on ancient Chinese architecture. In 1986, he visited the Temple of Heaven in Beijing, a famed imperial complex. He was awed by the temple’s grand layout and elaborate structures. On the spot, he decided to create his own Hall of Prayer for Good Harvests before he turned 60 years old.

In 2010, he found a model of the hall at an exhibition, but its components were joined with glue and the windows didn’t open. It strengthened his resolve to make an authentic model of the iconic structure built in 1420.

"This building has a profound meaning to Chinese people,” he said. “It was built to pray for abundant harvests and the nation's prosperity. The model had to not only duplicate the hall’s appearance but also reflect its inner ‘soul,’ such as mortise-and-tenon joinery.” 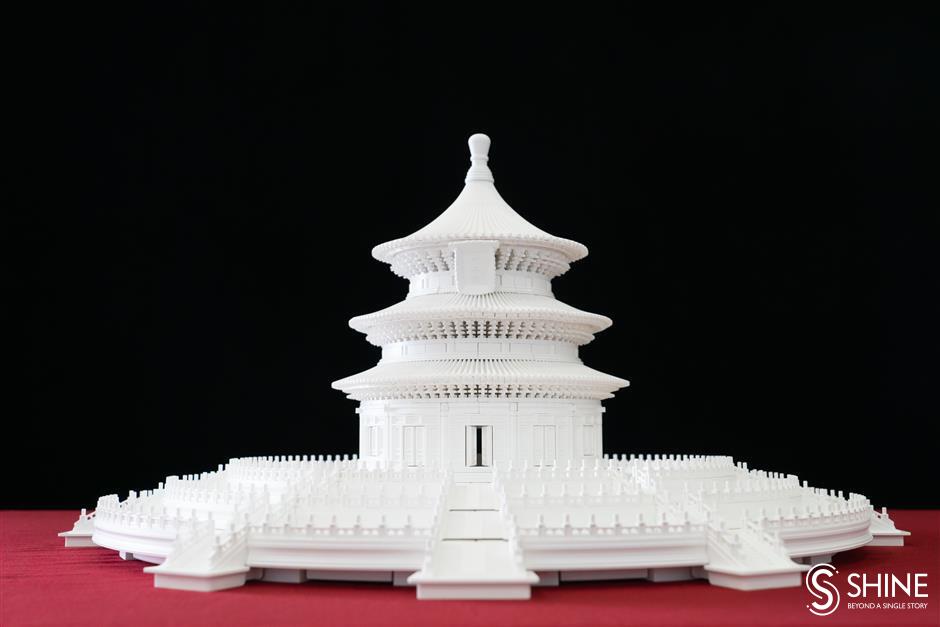 The model toy kit is white and buyers can paint the building according to their own preference.

Wang rented a house in suburban Qingpu District as his workshop. It took him more than two hours for a round trip on his electric bicycle.

He used cheap steel knives to make more than 300 special modeling knives. The thinnest head of a knife is only 0.8 millimeters.

"It was impossible to use the original sunmao joinery on such a small scale, so I had to design one for it."

"Our ancestors were really smart,” Wang said. “In the Tang Dynasty (AD 618-907), they used 'vision correction' in the construction of buildings. For example, the two ends of the roof of an ancient building were generally upswept. To make the bottom of the roof look like a straight line, the workers made the upswept part rise layer by layer."

He developed several versions of his model, perfecting a better joinery system each time. He burned old models and kept forging ahead. Sunmao requires great skill and accuracy to get the “tongue” of the tenon to perfectly fit the “hole” of the mortise. The result is a very strong structure.

"My son said he believed that I would succeed, and my wife never complained," he said.

In October 2015, the final version of the Hall of Prayer for Good Harvests was completed. Every tiny window on the model includes carving and can open. The model won top prize at the 2016 World Crafts Expo and has been valued at more than 10 million yuan (US$1.47 million), but Wang never entertained the thought of selling it.

The prayer hall replica contains 7,108 components. The components of the umbrella-shaped corrugated roof were connected with each other by a system called the Lu Ban lock. 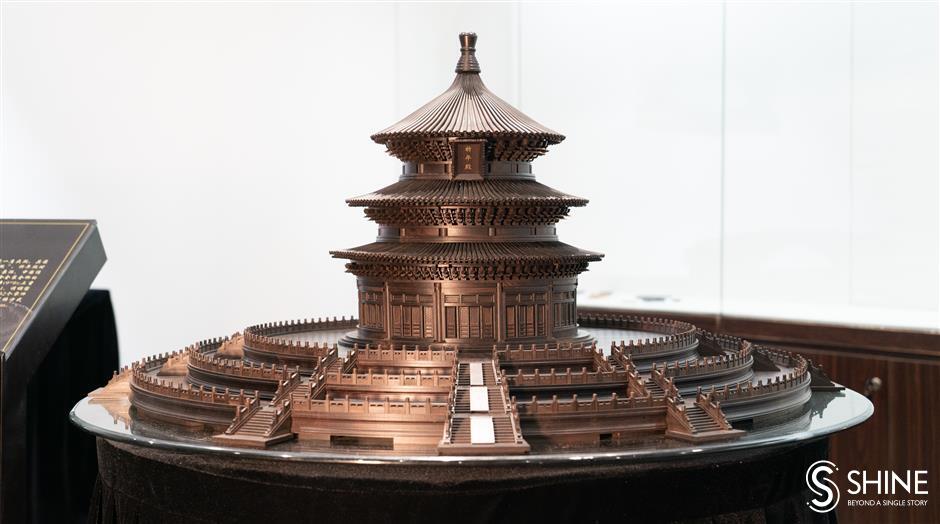 Wang's wood miniature replica of the Hall of Prayer for Good Harvests won top prize at the 2016 World Crafts Expo.

Three years later, Wang's second ancient structure miniature, the Zhaozhou Bridge, was completed. It is 50 times smaller than the real one in Hebei Province — 1,280 millimeters in length, 280 millimeters in width and 260 millimeters high. The toy replica could bear a weight of up to 40 kilograms if a person were to walk over it.

Wang used an interlocking “burr puzzle” for easy sliding and accurate fitting of the pieces.

Now Wang is planning for his third work, the Yellow Crane Tower, an iconic landmark in the Hubei Province capital of Wuhan.

After his prayer hall model won the national prize, a foreign company sought to collaborate with Wang to create a toy version but asked him to drop his mortise-and-tenon system and use another joinery method. Wang refused.

Xiaomi later approached him with a toy project that would retain his system.

"There are many ways to master cultural heritage, such as apprenticeships or classes,” he said. “China is a large importer and exporter of building block toys. But there are few quality toy brands like Lego in the country.”

He added, “Sunmao is a system different from Lego's linkage. To build a Hall of Prayer using Lego, it would take more than 100,000 building blocks and be a hard job for a child. But with sunmao, we can make the hall with only 877 components.” 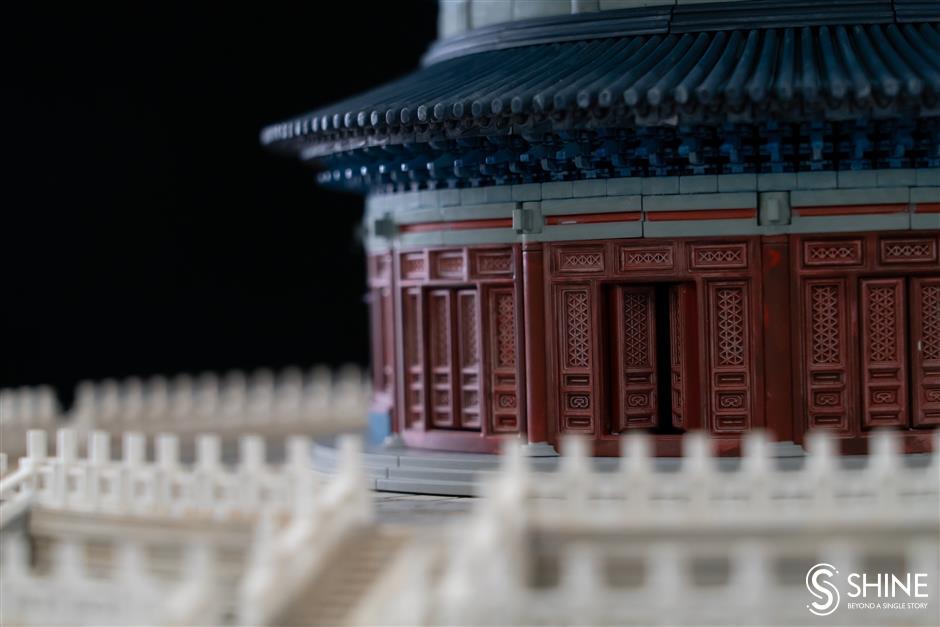 Every tiny window of the model of the Hall of Prayer for Good Harvests includes carvings and can open.

When designing the toys, Wang encountered several difficulties, including the need to adapt locking systems to a small toy and the need to balance difficulties so that the structure assembly wouldn’t be too easy or too hard.

"We don't give many detailed instructions in the instruction manual — just a few simple tips,” he said. “That prods parents to do some research on sunmao structures and share it with their children. It can be an education tool for all ages.”

Wang said he recalls a Beijing boy who spent a whole night trying to assemble a Hall of Prayer from toys.

“Another boy in Shanghai, who is only 6 years old and cannot read, finished the assembly in three days, based on his experience with Lego toys,” he said. “He told his mother that he likes my toy more because of the locking systems I designed."

After a child has built a whole model, according to Wang, he will have learned a lot about the techniques used in ancient Chinese building. 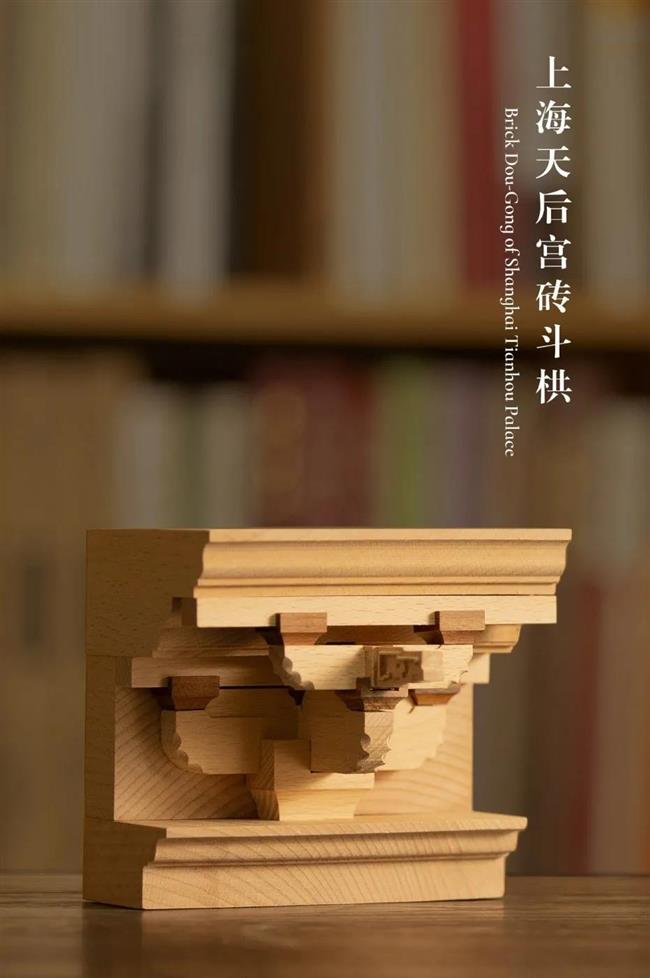 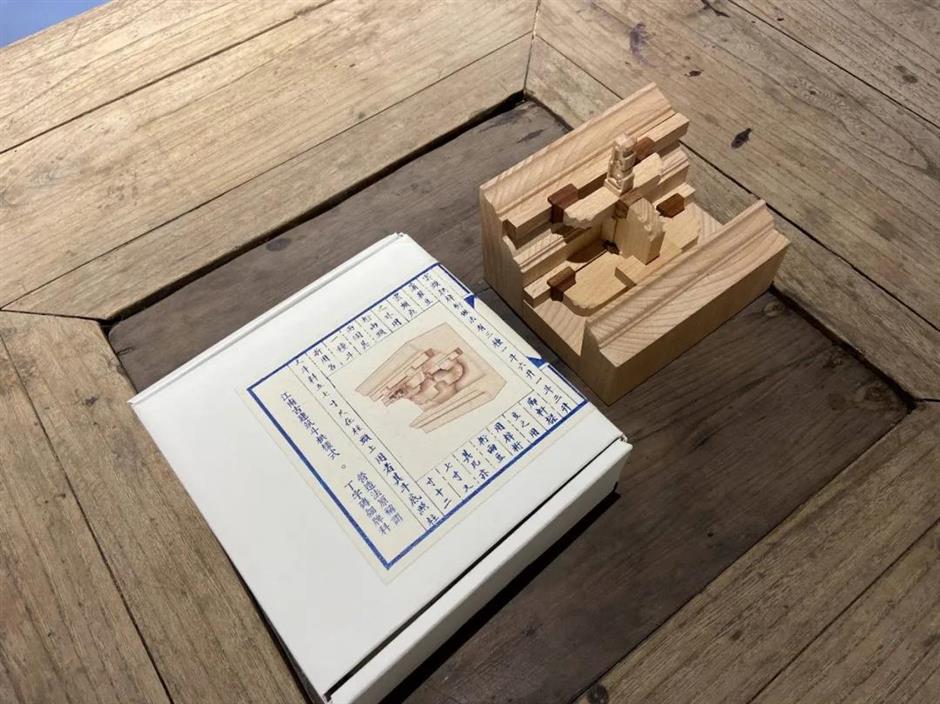 With an increasing national focus on Chinese heritage, more toys using mortise-and-tenon joinery are appearing in the market. In a bazaar at the recent Shanghai Tourism Festival in September, a toy model kit for the Shanghai Tianhou Palace excited visitors, Wang said. It was developed by Shanghai Jiao Tong University's International Research Center for Architectural Heritage Conservation and domestic firm Wanfeng.

The university team has also published a brochure about stories related to the Tianhou Palace.

"We're now responsible for the restoration project of the palace,” said Feng Li, who works with a design and research institute on historic buildings at the university. “During restoration, we found interesting structures and used 3D scanning to measure components. Dougong attracted us most, and we later incorporated it into the toy. It's just a small and simple sunmao structure, and it only takes 15 to 20 minutes to complete the assembly."

He said that using dougong allows people to appreciate the beauty of ancient construction.

Wang said it is important to make toys that are not only fun but also educational. 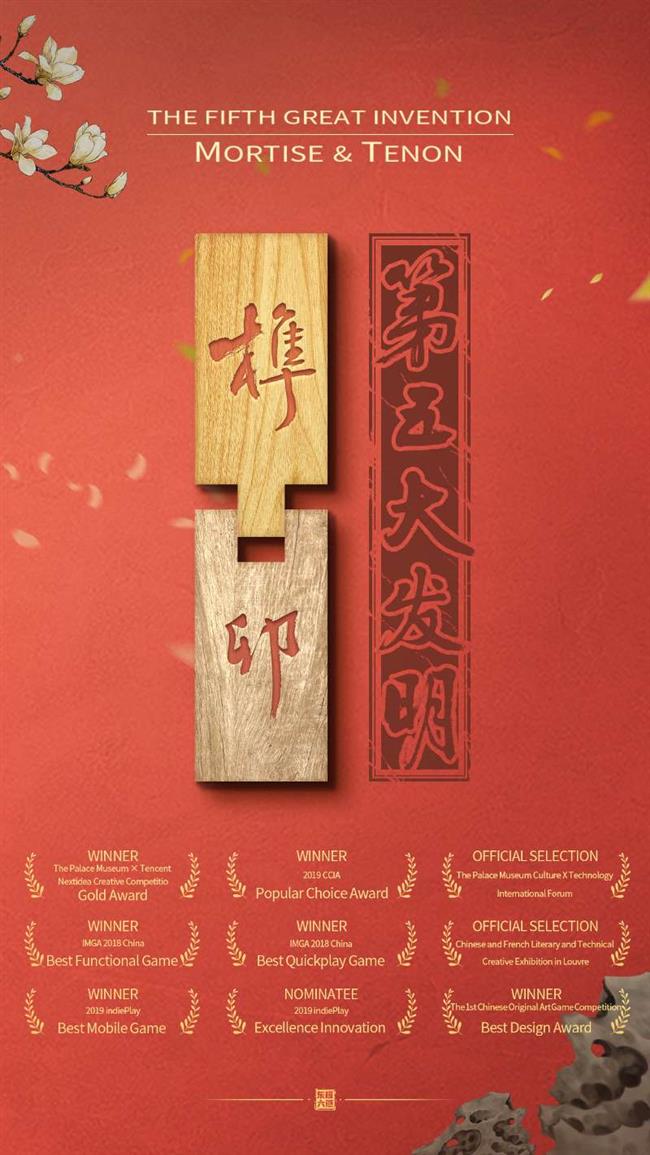 Online version of mortise and tenon

Like Wang Zhenhua, there are many Chinese organizations and individuals committed to keeping the ancient skill of mortise-and-tenon joinery along. One of them is 36-year-old game maker Tian Haibo.

Four months ago, a game called “5th Invention: Mortise & Tenon,” developed by Tian and his team EB Games, made its debut on Google Play and App Store. It allows game users to do woodworking techniques on digital, three-dimensional models and then connect the parts to make different structures, like carved furniture. Their completed pieces or buildings are added to their online collections.

The game, which has won several awards, has been translated into English, Japanese and other foreign languages, and hit overseas markets on October 1. The game has been promoted by Apple on its App Store for China.

“I used to study and work abroad and found that many foreigners didn’t know much about China,” Tian told Shanghai Daily. “I wanted to introduce them to this great country. I had worked in the architecture field and noticed that modern buildings are gradually replacing the old ones. I wanted to show people the charm and philosophy of traditional Chinese architecture.

“Sunmao’s origin can be traced back to the Spring and Autumn Period (770-476 BC), with the technique reaching its peak during the Ming and Qing dynasties. In 1973, people discovered many wooden objects made with mortise-and-tenon joinery at the Hemudu archeological site in Zhejiang Province.” 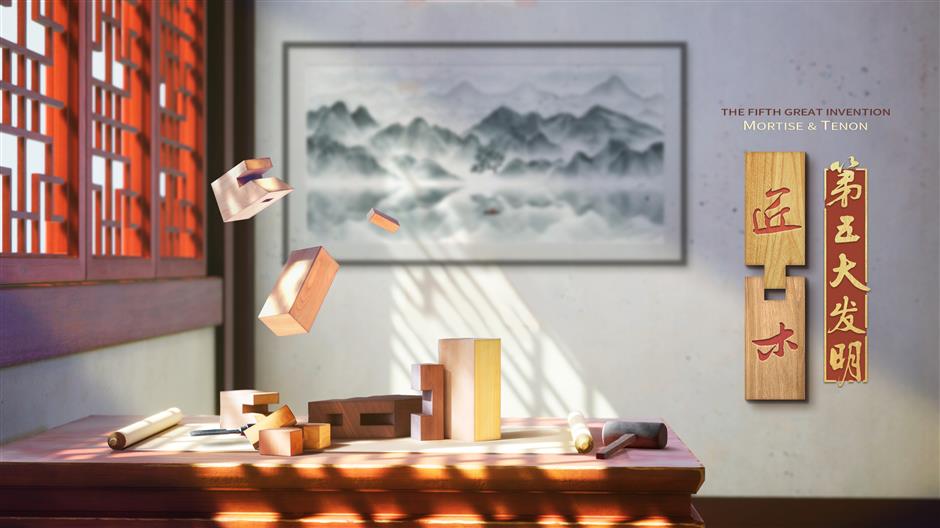 To create his game, Tian visited old carpenters, did woodworking on his own, searched online materials and read professional books about mortise and tenon.

"I once met a customer who showed me a half-completed small wood bench he made at a store where people can try their hand at woodworking,” Tian said. “He told me that the legs of the bench connect tightly to the seat with no gap because they are attached by mortise and tenon. That made me realize that everyday people could enjoy this form of construction.”

It took him four years to complete the game. Most of his original team of three or four people left before the project was completed. There was always a shortage of money.

Tian left Shanghai for Chengdu, capital of Sichuan Province, and made a new start with a team of six. One programmer told him that the project was more satisfying than other games he had worked on.

When the game was launched for public trial on the domestic mobile games sharing platform TapTap in December 2018, the feedback was a score of 9.9 out of 10.

"It shocked us," Tian said of the rating.

The game now has about 30,000 five-star ratings on App Store.

"In this digital era, the Internet allows us to learn traditional culture at home,” Tian said. “In our game, players learn while playing."

He said the team’s next game will involve China's 24 solar terms. 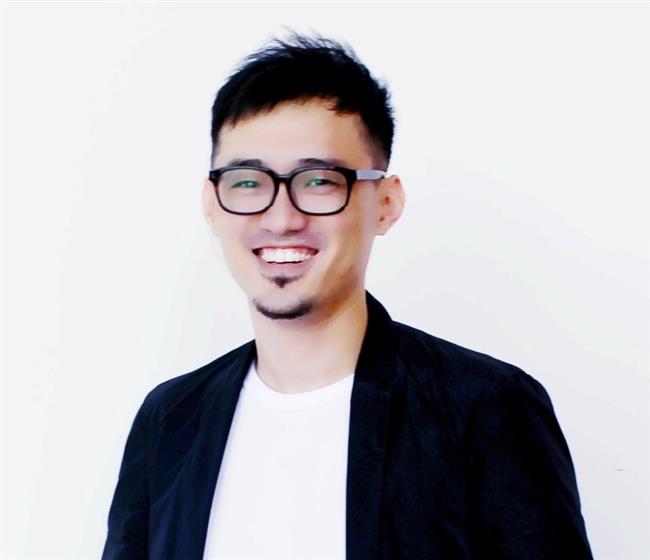