Lonely in old age, with only the Internet as companion

A 61-year-one Jiangxi Province woman surnamed Huang recently made headlines in China for all the wrong reasons.

She was so convinced that a user on Douyin, the Chinese version of TikTok, was the famous actor Jin Dong who wanted to marry her, that she changed her hairdo, stopped sleeping with her husband and even traveled to another city for a “date.”

Huang’s husband sought help from local media, which did a bit of digging and found many imposters posing as famous actors on the platform. Many older followers reported experiences similar to Huang’s. The fraudsters made money by selling dreams and then products to followers.

“I know it’s unrealistic, but I will keep waiting for him,” Huang told local media, insisting her virtual love affair was no scam. 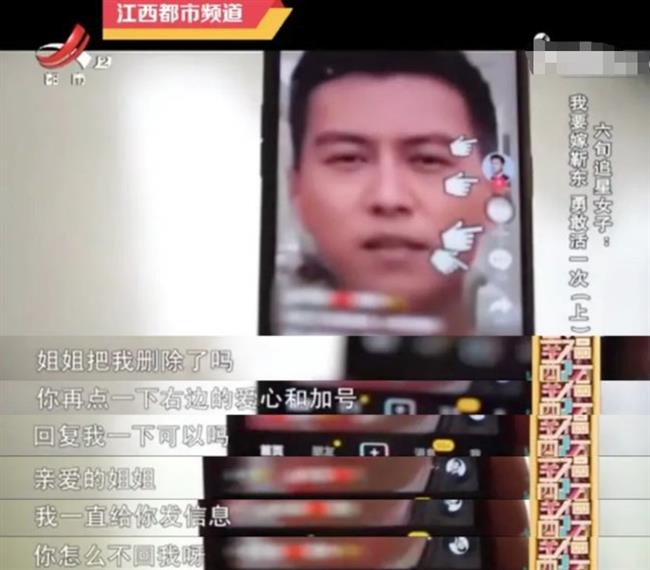 A screenshot shows someone who lip-synched Jin Dong's pictures and clips with the imposter’s voice tried to persuade elderly women to interact with him.

Douyin quickly deleted many such accounts from its platform. Actor Jin released a statement clarifying that he doesn’t have a personal account on any short-video platform and is considering legal action against people impersonating him.

Tencent news published a follow-up story that interviewed 19 women between the ages of 50 and 70. All reported falling for similar scams. Some, like Huang, refused to believe it was all a fraud.

As the issue continued to play out online, many netizens wondered how Huang and other elderly women could fall for such badly produced videos, which usually lip-synched pictures and clips with the imposters’ voices.

Some netizens found, to their dismay, that their own parents or grandparents had been snared and began to realize the situation was more serious than just a “crazy fan” trend but was, instead, a sign of isolation and loneliness.

As of the end of 2019, China had a population of 253.88 million people aged 60 years or older, comprising about 18 percent of the total. Many live alone, their spouses dead and their children either far away or preoccupied with their own lives.

The problem of senior isolation and steps to address it make headlines from time to time in China. The National Health Commission announced last year that it would carry out a psychological care program for the elderly in 1,600 urban communities and 320 rural villages. It was designed to improve mental health services to senior citizens through training sessions, mental health assessments, interventions when required and referrals to help.

A screenshot shows Huang telling a reporter about how she fell in love with the fake Jin Dong. She said both of them clicked well, and he was kind and considerate.

But Huang’s odd tale triggered an unprecedented discussion on the Internet, just as the Double Ninth Festival is nearing on October 25.

The festival, dating back 2,000 years, falls every year on the ninth day of the ninth lunar month. In contemporary times, it has all but disappeared, and the day has become an occasion for buying gifts for elderly relatives or friends.

“I was really sad when reading the story because it reminded me of my mom, only a few years older than Huang,” 32-year-old Cecilia Yuan, a Hunan Province native working in Shanghai, told Shanghai Daily.

“I used to think I was fulfilling my filial duties quite well because I go back to my hometown to visit her once or twice a year, and I often send her gifts. But now I am wondering whether I have really given her emotional support or worried about how she feels. Most of the time, I was just physically there, doing my own things.”

Yuan added that she was surprised her mother, who lives in a rural town, suddenly became addicted to the Internet and various social media apps earlier this year. She thought it was just a passing phase during the home-bound period of the novel coronavirus outbreak. But she began to rue the occasional times she had harsh words with her mother.

“I feel guilty now,” she said. “My mom and many of her friends of the same age worked so hard for family their entire lives, and they don’t really talk about love in the romantic sense. The Internet is probably a way of dealing with loneliness.” 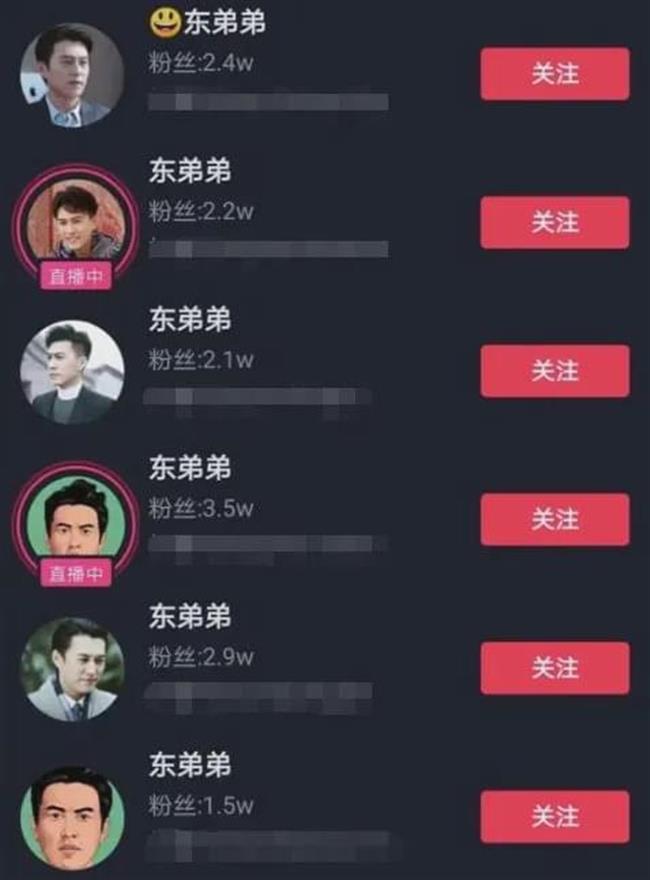 A screenshot from a popular short-video platform shows many accounts of falsified profile photos of actor Jin Dong.

On Friday, Nasdaq-listed Chinese mobile content aggregator Qutoutiao released a survey on the Internet behavior of the elderly, mainly based on the app’s 1 million senior users.

It shows that about 1,900 of them spend more than 10 hours a day on the app, 4,000 more than eight hours and 12,000 more than six. The report also said that there could be more than 100,000 elderly people around the country who live on the Internet for over 10 hours, revealing an extremely lonely lifestyle.

“Hopefully, more focus can be turned to the physical and mental health needs of the elderly,” the company said when releasing the report. “We need to spend more time with them, instead of having them spending the rest of their lives with mobile apps for company.”

Another viral post in September revealed that many elderly were found to be livestreaming at midnight or into the early morning hours. Some of them rambled in talk, while others did strange things like eating cactus. The blogger and netizens in comment sections posted screenshots of such livestreaming. 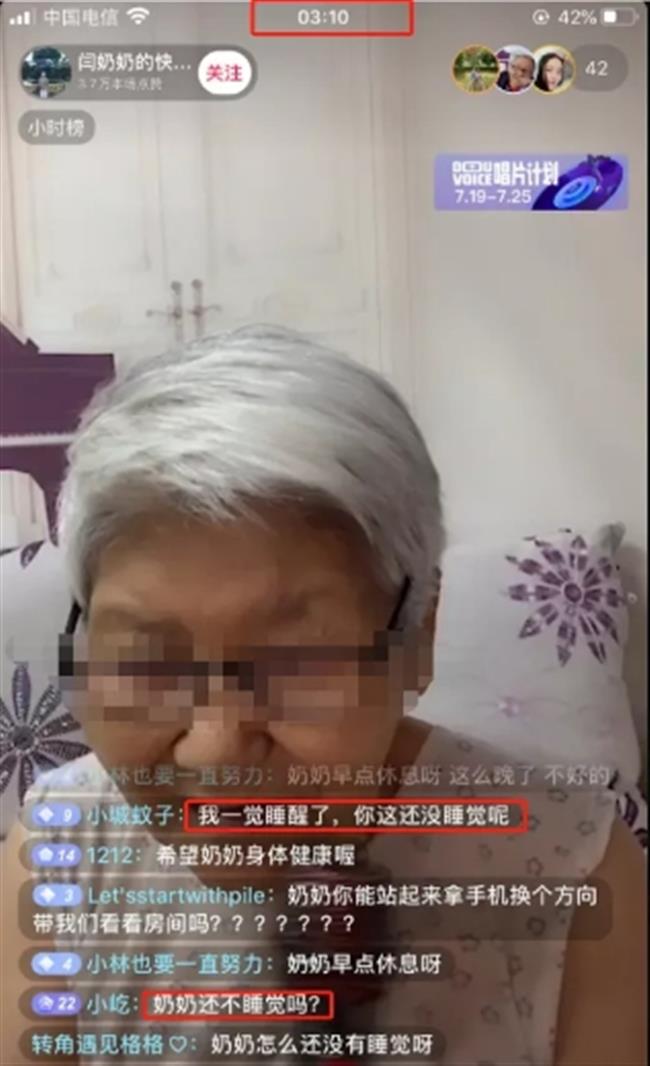 Many viewers insistently ask the elderly livestreamer why she is still awake in the wee hours of the morning.

Shanghai Daily searched on several short-video platforms and found quite a few accounts with seniors livestreaming at 1am or 2am, or sometimes even livestreaming for up to 10 hours. No odd or dangerous behavior surfaced from the search. Still, many viewers kept asking the elderly livestreamers if they were okay.

In comment sections, some netizens said they suspected that some of these seniors were somehow being coerced to do such livestreaming. Some platforms subsequently deleted the accounts.

Shanghai Daily asked one senior user during a livestreaming activity, “Why are you talking to the Internet at 2am?”

She replied, “This is the only time I have for myself, and I can’t fall asleep.”