Volunteers, young and old, lend their time and talent to import expo

The past two China International Import Expos have relied on volunteers to lend support to the mammoth trade fair, and this year is no exception.

Fang Weiping, 74, Tang Yanqiong, 37, and three other volunteers will be providing logistical support for a team of about 140 volunteers assisting transportation around the National Exhibition and Convention Center in Qingpu District, where the event will be held from November 5 to 10.

“They were selected from interviews because of their good communications skills,” said Gong Ting, an official in charge of recruitment. “Fang and Tang will distribute food and supplies, such as vests, caps and bags, to volunteers.” 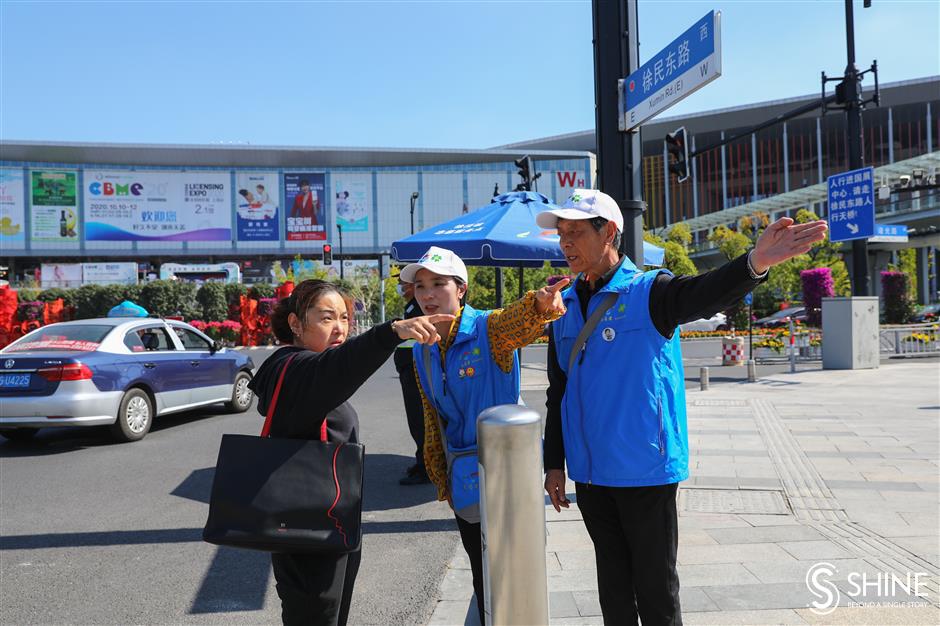 Fang and Tang show a passenger the way to the Metro station outside the National Exhibition and Convention Center in Qingpu District recently.

Both Fang and Tang have been involved in community volunteerism for about 10 years.

Fang, nicknamed “Grandpa Fang”, has been assisting in traffic control outside a kindergarten and primary school in Xujing Town in Qingpu since 2008.

It all started when he walked his granddaughter to kindergarten and worried about all the traffic near the venue.

“Too many private cars and buses are around the gate of the school, especially before and after school,” Fang said.

Tang, who had two school-age children, said it was a bit odd at the beginning to see a stranger directing traffic. But in ensuing years, she and other parents volunteered to help Fang. 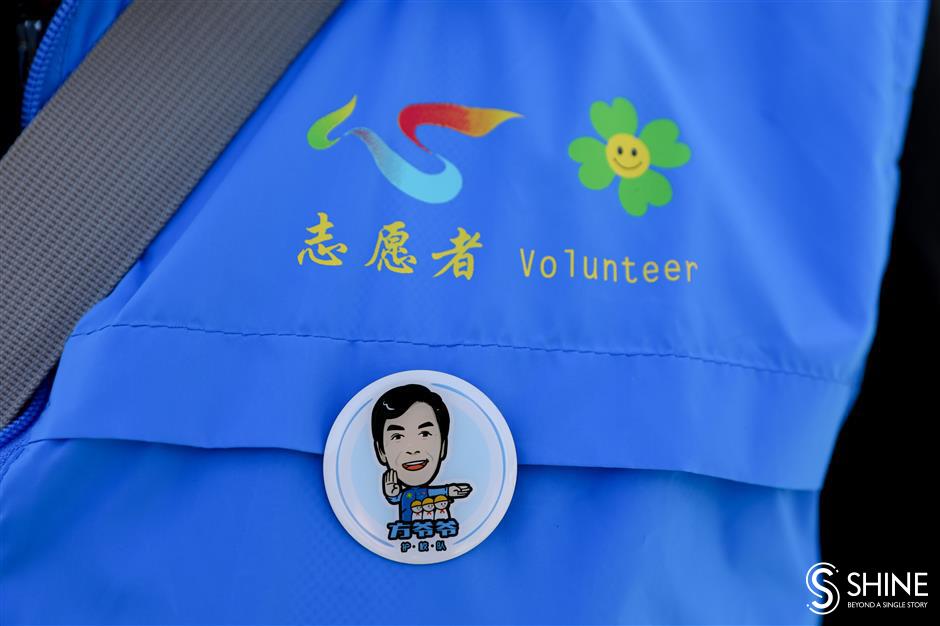 A badge with cartoon character "Grandpa Fang" is shown on his vest. The logo is for the volunteer team directing the traffic outside the kindergarten and primary school.

“My children told me that their classmates admired my being a volunteer and asked their own parents to join us,” Tang said. “The traffic situation has improved. The time for each student to get dropped off at school has been cut to about three seconds from three minutes.”

Fang and Tang still do traffic duties before and after school. In between, they are volunteering at the expo site.

“Tang and I have worked as expo volunteers since the first exhibition three years ago,” Fang said. “Although we feel tired sometimes, we enjoy the process of helping others.” 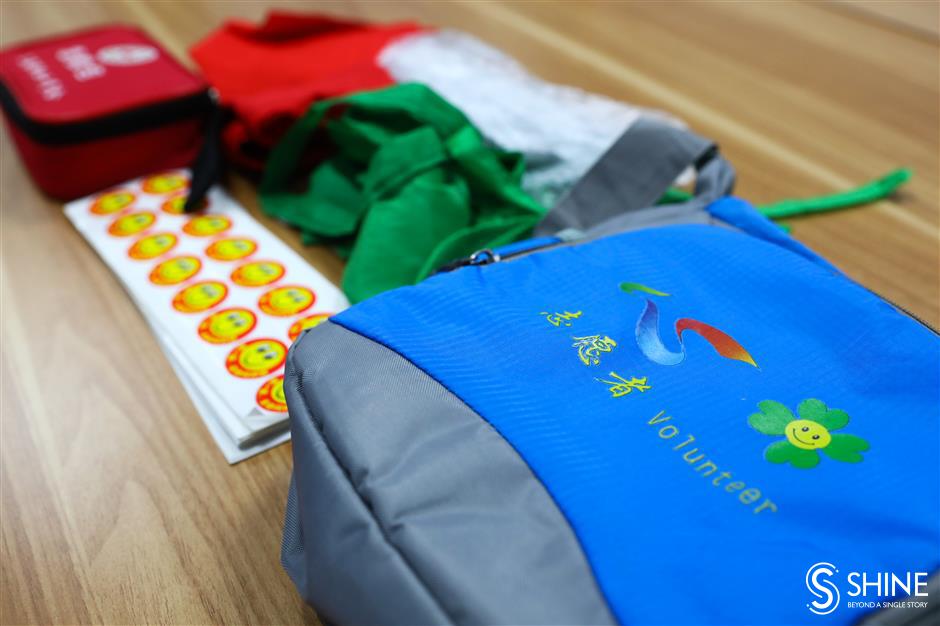 The bag with stickers, red and green scarves which should be brought by students every day, and first-aid kit are taken by Fang's team for children before and after the school.

“One day, they asked me whether they might be able to have drumsticks for lunch,” he said. “I called the official in charge and he changed the menu for the next day to include drumsticks.”

A small service, but Fang said the young volunteers who stand out on the road in blazing sunshine deserve consideration.

On their last day as expo volunteers last year, Fang said it was hard to say good-bye to his new, young friends.

Among the other volunteers is a group of 34 students from Shanghai Publishing and Printing College. They have been working at Qingpu venues since September 21, making credentials for officials, exhibitors and vehicles. The volunteers even worked through the recent eight-day National Day holiday.

A volunteer is making credentials in Qingpu District on Wednesday.

More than 700,000 credentials were issued at last year’s expo.

“Every day, we were making more than 4,000 credentials,” said Ma Longfeng, a 20-year-old woman in charge of making them for vehicles. “We were told several days later that we needed to increase our output.”

Gao Jie, a member of that group, said volunteers normally work from 9am to 5pm and have to stand more than six hours a shift.

But Gao said he was proud to be selected as an expo volunteer, his first time at the event.

“Only one of every 10 students was selected, based on academic achievement and character,” the student said. “The things I am doing are related to my major. It is a great experience for me because skill comes only with practice, patience and persistence.”

According to the Shanghai Communist Youth League, more than 4,000 volunteers from 40 universities and colleges in the city are providing services to expo in areas such as guide work, provision of information, data compilation and emergency rescue.

Special Reports
ADVERTISEMENT
61840
,
Volunteers, young and old, lend their time and talent to import expo
Lonely in old age, with only the Internet as companion
'Baby boomers' enter old age, changing society and the economy
The silver lining for coping with life as we get older
China's e-yuan gets tested at the grassroots ahead of rollout
A cup of coffee and a hope for the future
Upgraded platform to guarantee safe expo
How to make a silk purse out of a sow's ear
Cruise industry seeks to stay afloat in a pandemic-scarred world
Transport system makes final preparations for CIIE
EXPLORE SHINE