Shanghai gets spruced up ahead of import expo 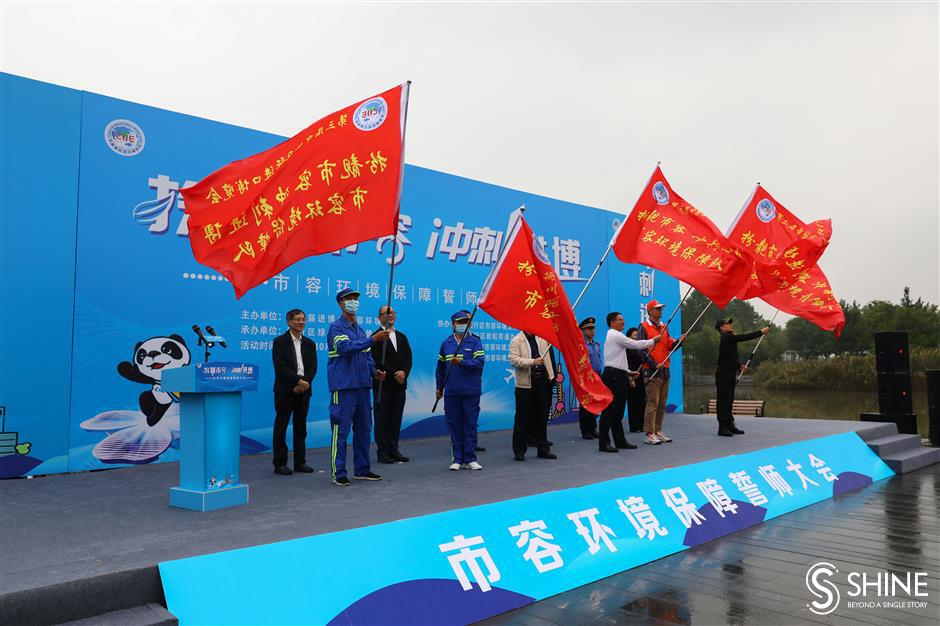 Shanghai's greenery and public sanitation workers gear up for the CIIE. 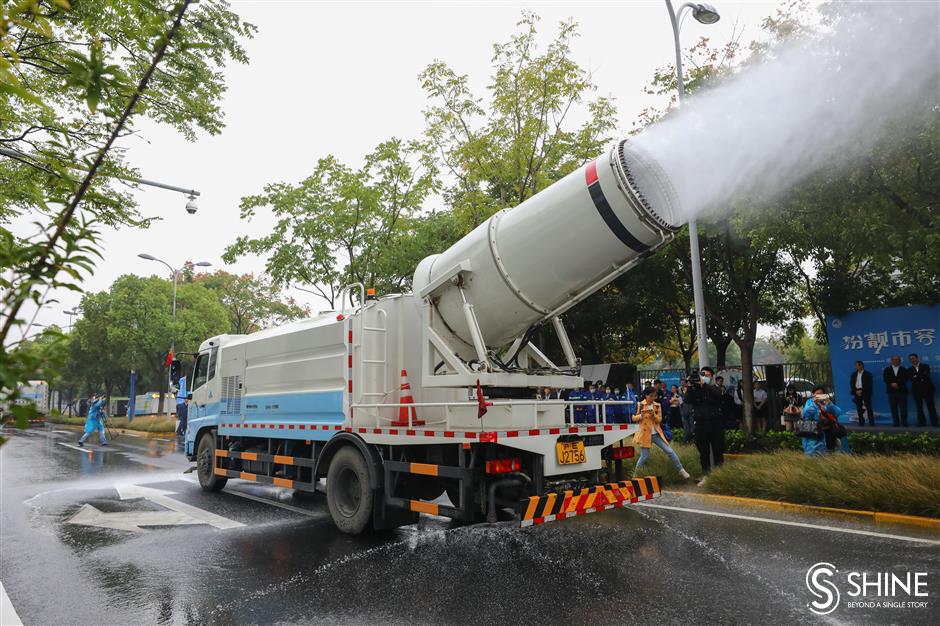 Advanced road spraying vehicles are applied in Minhang District to ensure a tidy environment of the expo.

Shanghai has been spruced up for the upcoming China International Import Expo (CIIE) with floral displays, light show and a supremely tidy environment.

A total of 2,946 public sanitation and environment upgrade projects were mapped out and all will be accomplished by the end of this month, the Shanghai Greenery and Public Sanitation Bureau has announced.

"Refined sanitation management is required, which is 24 hours per day, everywhere, to eliminate all 'dead corners'," said Zhu Xinjun, chief engineer of the bureau.

"Patrols and law enforcement have been stepped up to ensure that sanitation-related problems are spotted and fixed efficiently," he said.

Facelift projects on the facades of 29 buildings have been completed, and 3,157 outdoor advertisement boards and shop boards that affect the environment have been dismantled, according to the bureau.

The environment of streets such as Ruijin Road S. has improved. 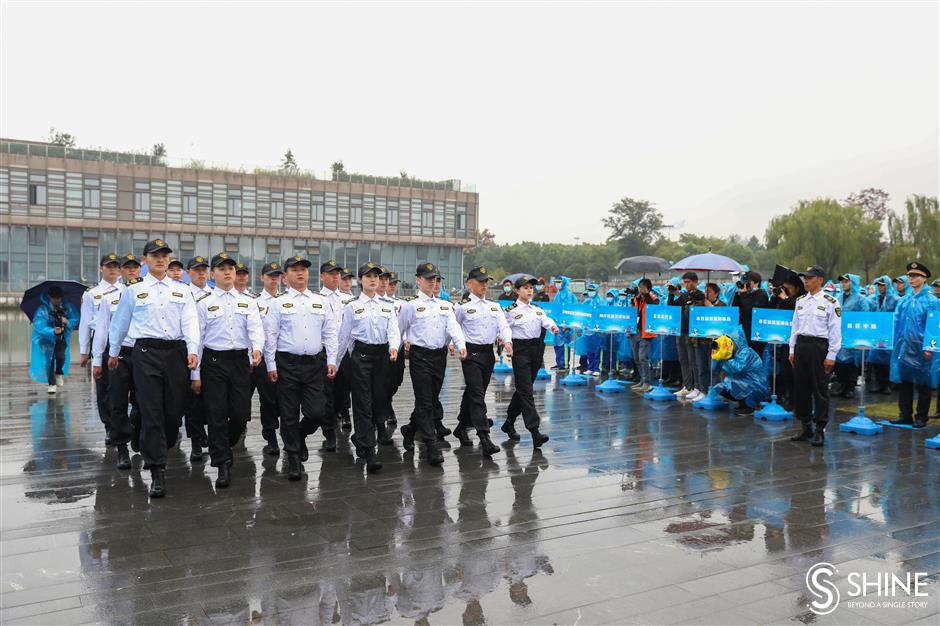 Shanghai's greenery and public sanitation workers gear up for the CIIE.

Greenery improvement projects have been conducted at key areas such as People's Square, the Bund, Lujiazui, the National Convention and Exhibition Center, Jing'an Temple and Xujiahui; on 13 key roads like Yan'an Road and Huaihai Road; and along the Huangpu River and Suzhou Creek.

Floral displays totaling 180,000 square meters will be presented in the city during the CIIE, and the number of CIIE-themed greenery landscapes in the city will amount to 73, according to the bureau.

In total, 13 million pots of flowers will be set up during the event.

The CIIE venue will be decorated by nearly 8,000 square meters of flower beds surrounding it.

A CIIE-themed greenery landscape will be created at the south square of the National Convention and Exhibition Center.

At People's Square, a new floral display features a flying phoenix and nearly 1,000 square meters of flower landscapes have been created along the Huangpu riverfront in the Pudong New Area, featuring about 300 varieties of plants including aromatic plants and vine flowers, the bureau said.

The landscape illumination project of the Huangpu River has been finished completely, involving nearly 1,000 buildings, according to the bureau. 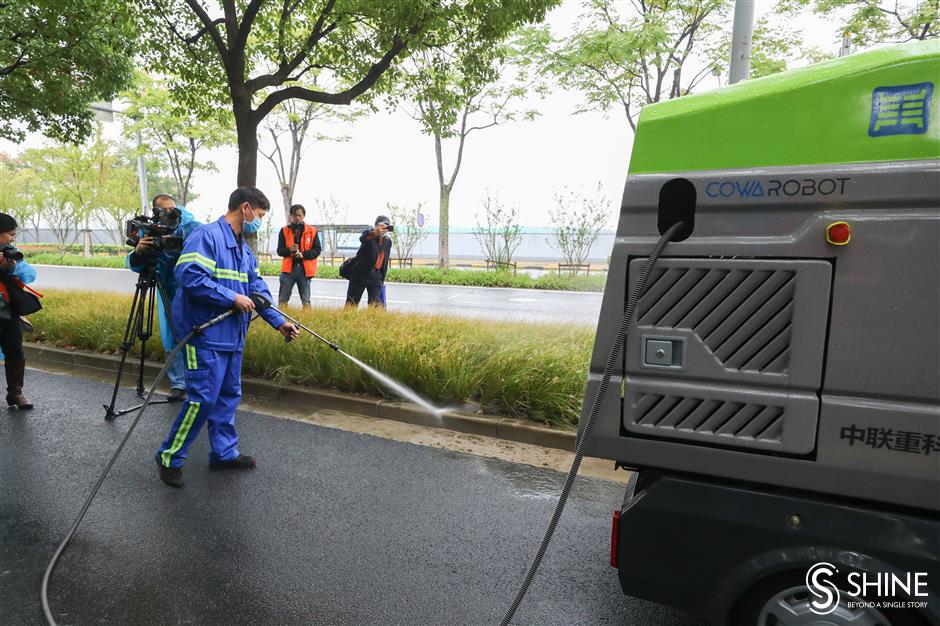 A public sanitation worker washes a street in Minhang District to ensure a tidy environment for the expo.

Road-sweeping vehicles are used in Minhang District to ensure a tidy environment of the expo.

Areas such as Lujiazui, the Bund, Wusongkou and the Xuhui riverfront will be illuminated during the expo.

"A light show along both banks of the Huangpu River during the National Day holiday impressed residents and tourists, and we are actively preparing another light show for the CIIE," said Wang Yongwen, director of the public sanitation management department of the bureau.

More than 75 percent of 425 environmental improvement projects concerning the Suzhou Creek are underway now, and new shops, bars and exhibition venues are making the creek banks an ideal place for leisure, the bureau said.

A new relief wall on Beiyu Road in Changning District brightens the banks of the creek.

The city has conducted 1,363 cleaning campaigns this year. During these campaigns, about 1,000 areas and spots with poor sanitation were cleared, and 8,085 blind spots and dead corners were cleaned, according to the bureau. A total of 2,043 tons of trash were cleared during the campaigns as well.

The city's "beautiful block" project has significantly improved its appearance and environment, and Shanghai has created 275 such beautiful blocks, according to the bureau.

More than 2,800 signboards have been dismantled in the project, and about 33,000 shop boards were upgraded. 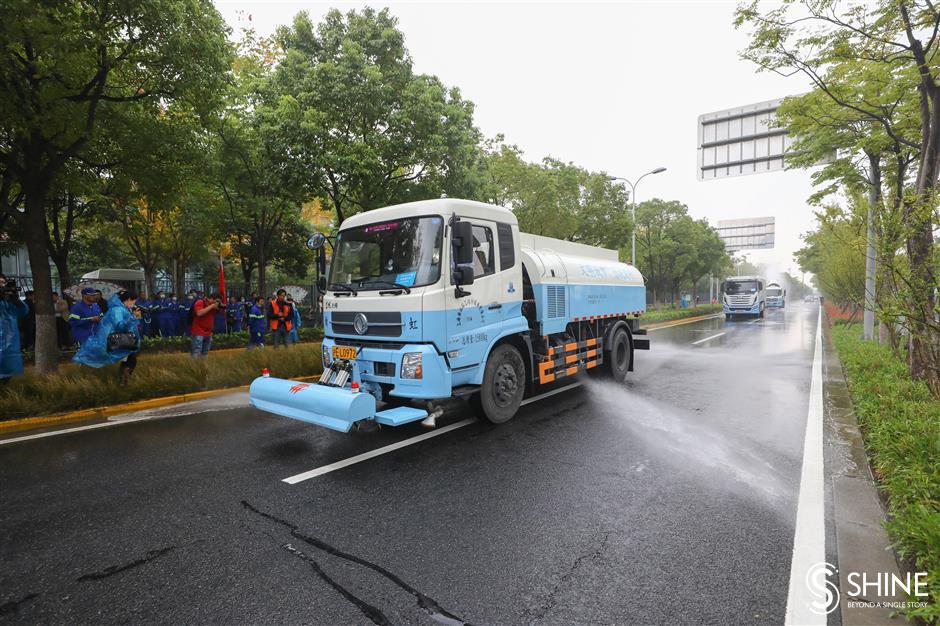 Advanced road-sweeping vehicles are applied in Minhang District to ensure a tidy environment of the expo. 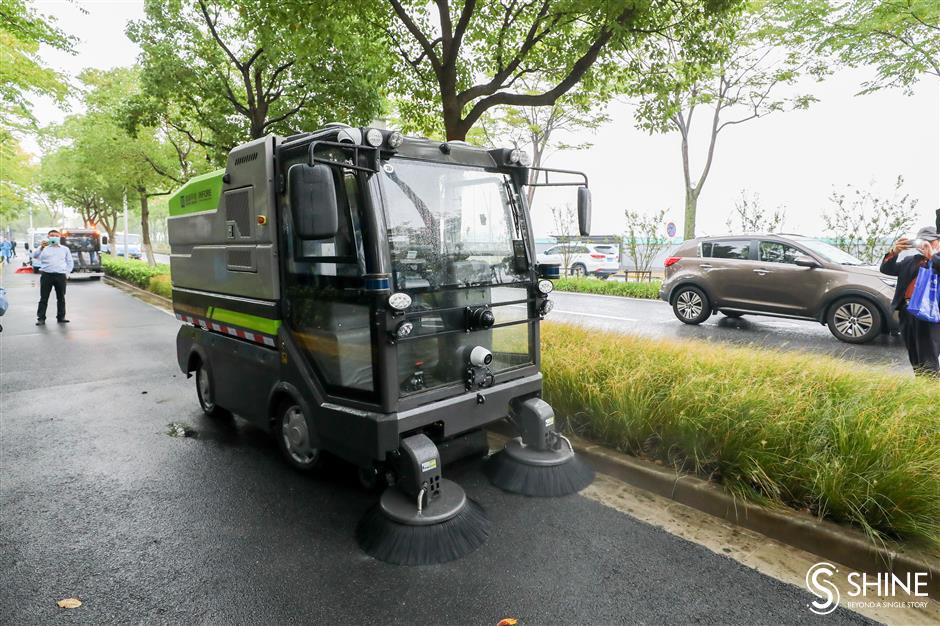 New urban renewal projects have been completed along Shanghai's nearly-century-old Wuyi Road in Changning District to restore its history and culture while opening up more public space.

"We have conducted a number of emergency drills for the expo and are fully prepared," said Wang.

"The cleaning and greenery maintenance of public facilities, transport hubs and construction sites is a highlight, and patrols will be stepped up to crack down on random parking of non-motorized vehicles and illegal outdoor advertisements," he said.

In Xinhong Subdistrict of Minhang District, a key area of the CIIE, advanced road-cleaning vehicles are applied.

"It features high-pressure washing functions and can reach areas such as greenery belts that big vehicles can not reach," he said.

Greenery landscape outside the National Exhibition and Convention Center Shanghai