Slime molds: Their beauty is in the eye of the beholder

“Slime molds” may sound a bit yucky to most people, but to Zhou Qingfeng they are fascinating, often beautiful organisms that grow on decaying material and are biological cousins of more familiar fungus like mushrooms.

Zhou, 30, a drug developer in the pharmaceutical industry, began taking photos of fungus and slime mold in 2012, posting many on her Weibo account. Five years later, she began taking time-lapse photography of specimens and uploaded them on the video platform Bilibili. She has 228,000 online followers. 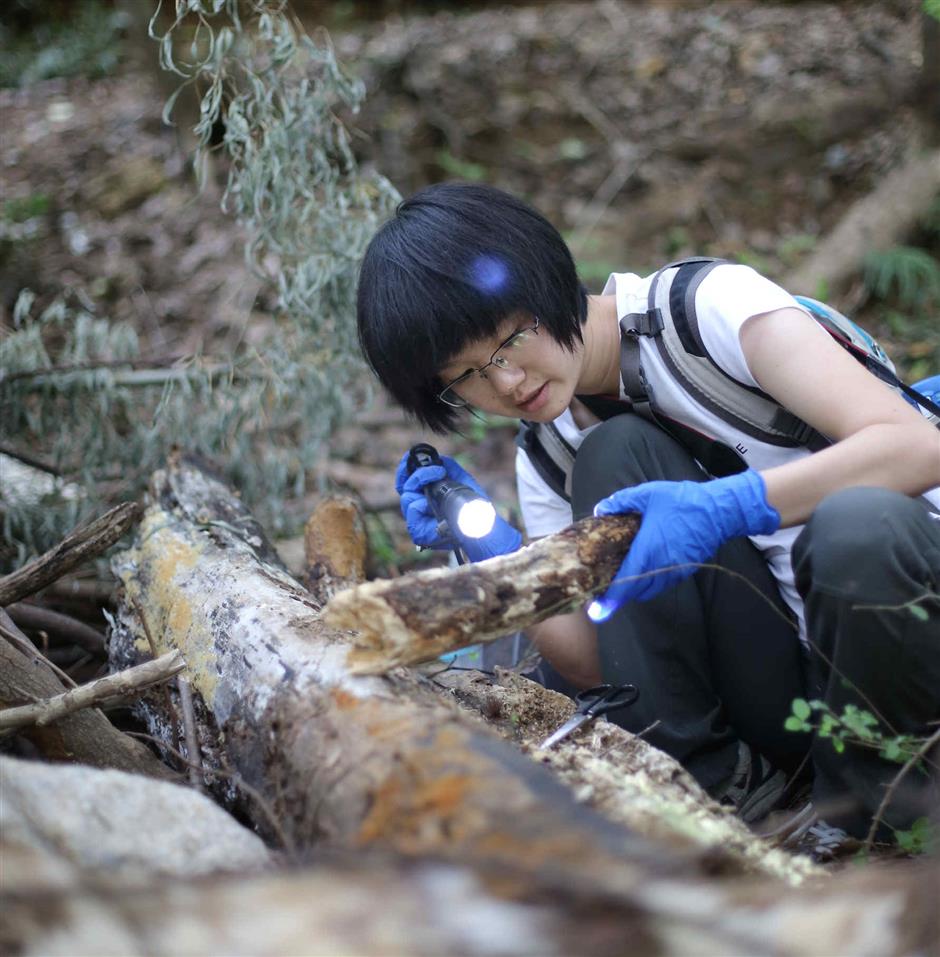 Zhou Qingfeng looks for signs of fungus growth on a rotting branch during a forage in the wild.

"My eyes seem to have been blessed by god to find them," she said of her work.

Zhou has uploaded nearly 80 videos on fungus and slime mold. They show how spores too small to be seen by the human eye grow into often fascinating shapes. The most frequent question she is asked by online fans is when the next video will air.

Her pursuit takes her into woodlands, where she looks for rotting wood that may harbor fungus and slime mold spores. Wandering in the wild and observing nature have been a passion since childhood.

"Sometimes, if I couldn't go out, I would take a spoonful of water from a nearby creek and observe it under microscope all day long," she said.

Eight years ago, Zhou got hooked on watching bird life and bought her first camera with telephoto lens.

After she graduated from university in Hunan Province in 2013, she decided her interest in observing nature outweighed an earlier interest in traditional Chinese medicine. She found a job in Shanghai and delighted in the city’s seabird populations.

Her attention turned to fungus and slime molds after seeing photos of them.

"I felt I had opened the door to a new world,” she said. “Fungus are dependent not on place but on climate. No matter where you are, they can appear after rainfall. They are pretty and I like pretty things. I fell in love with them at the first sight."

In May 2015, Zhou found a tiny white blob in some grass. It looked at first glance like a slug about a millimeter long.

"It took me long time to identify it,” she said. “I finally found that it was a slime mold called Didymium squamulosum."

She photographed it and posted it on her Weibo account, which launched her online popularity.

She refitted her telephoto lens with a magnifying glass. Carrying her photographic gear into woodlands, she headed to damp areas to look for fungus and slime mold on rotten wood and leaves, on bark and rocks, and even on animal feces.

"It is estimated there are more than 13 million kinds of fungus in the world, and only less than 100,000 types have been documented,” Zhou said. “So far I've photographed fewer than 1,000. There are still lots of fungus waiting for me to photograph.”

In 2016, she was looking for a beautiful slime mold called Badhamia uticularis. A friend who does research on edible fungus took some Jew’s ear from a mountain site to a lab and sent Zhou photos of a weird growth she found on the plant. It was exactly the mold Zhou was searching for.

"At that time, I was in the Pudong New Area and she was in Fengxian District,” Zhou said. “I immediately took a 100-kilometer round trip to get the mold and stayed up all night observing it. "

Zhou describes many slime molds and fungus as “lovely fairies.” Fuligo septica produces a bright yellow noodle-like mold. Sphaerobolus looks like egg yolks, and Pilobolus, which grows on cow dung, has a crystal-like appearance. Physarum polycephalum can "escape" from a Petri dish. 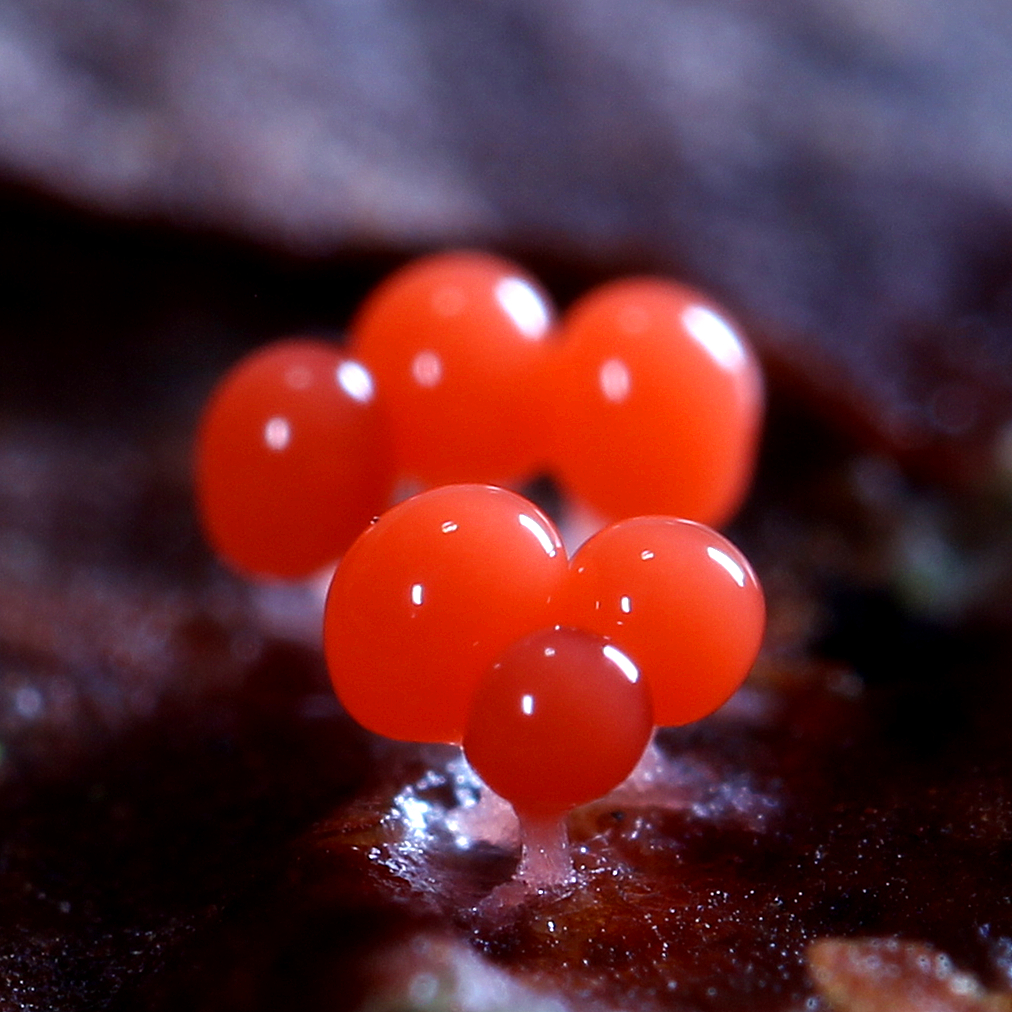 She has explored almost all the wild areas of Shanghai’s outskirts and visited other provinces like Guangdong and Yunnan to take photos and collect specimens. Her pursuits can be risky.

"Once I was looking for a kind of mushroom, and when I found it and reached out to collect it, I saw a poisonous snake lying nearby," Zhou said. "Another time, I went to a mountainous area for photographing but got caught in a terrible storm. On the way back, I narrowly avoided a landslide." 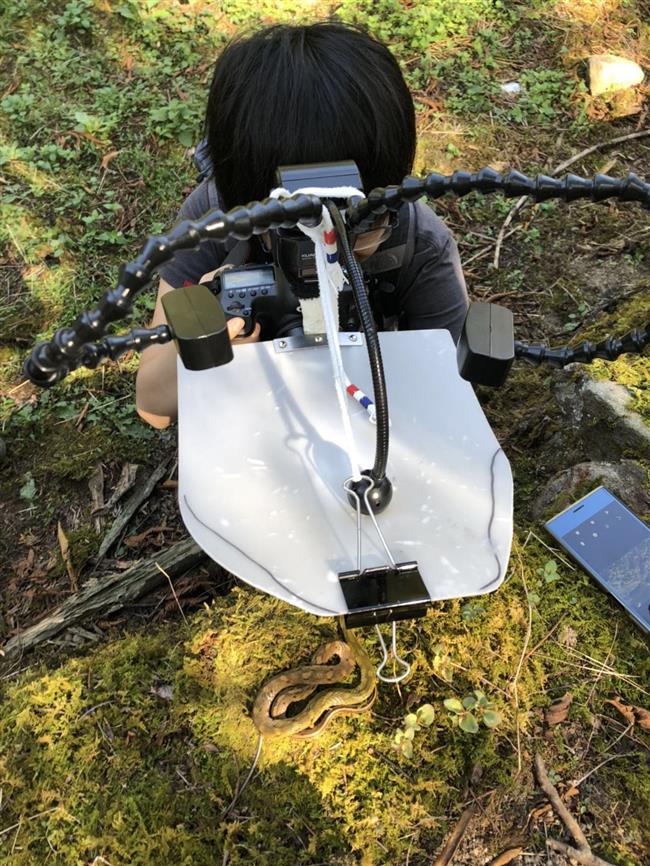 Zhou Qingfeng takes a picture of a snake on moss.

After collecting specimens, she takes them back to a lab she has created at home. There she cultivates them and photographs their growth. A short video clip lasting only tens of seconds may involve several weeks of work.

Success isn’t always guaranteed. Humidity that is too low can cause fungus to shrivel. Her home lab has a humidifier.

Once when Zhou was filming a rare slime mold, she found near it another newly grown baby slime that belongs to an even rarer category. She photographed both day and night in 10-minute intervals.

Before her video of the Stemonitis slime mold became popular online last year, she had photographed it and posted pictures and videos of the hair-like genus for four years without much viewer reaction. Then she added a special sound effect, somewhat like a creaking board, to the video to give it more context.

"The video gained wide popularity and even appeared on overseas video platforms," she said. 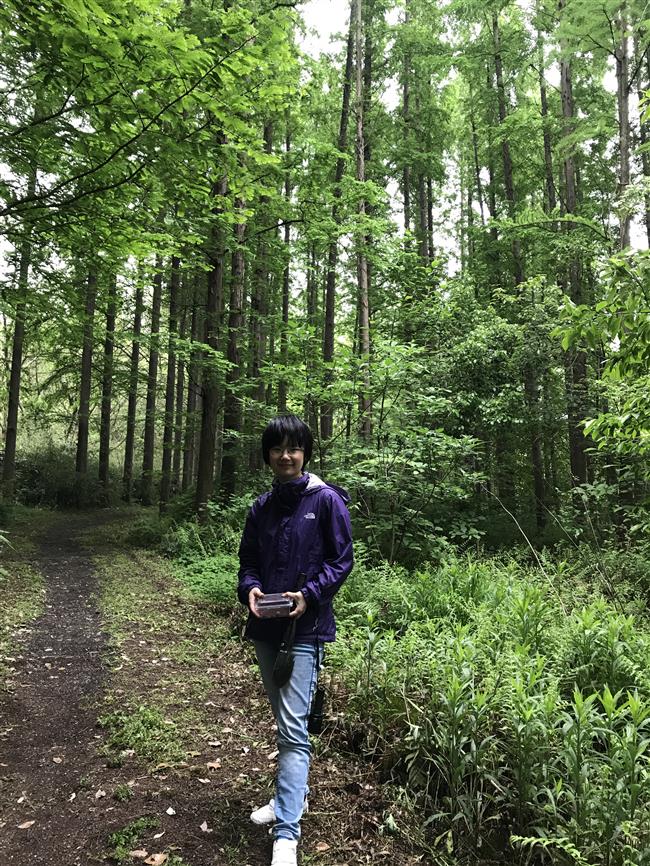 Zhou Qingfeng collects a box of horse manure, where some fungus live.

Zhou, who does a lot of research on fungus and slime mold, said she hopes her work helps popularize science.

"I use the pictures and videos to draw people's attention, and if they get interested, they can study them further on their own,” she said.

Some parents have told her that their children developed an interest in slime mold and fungus after watching her videos.

"One mother said her son would agree to go to bed only after he was allowed to watch one of my videos,” she said. “He also asked her to buy him some books on fungus. Hearing her words, I felt a sense of responsibility."

Some online followers told her that they now take a longer look at rotten wood. Some sent her photos of mold growing in moist areas of their homes and asked her to identify it. The more enthusiastic buy cameras to shoot fungus on their own.

Zuo Qin, an academic at the Shenzhen Fairy Lake Botanical Garden in southern Guangdong Province, said she is happy to see people popularizing science in so many different ways.

"There are an increasing number of popular science platforms,” she said. “It's easier for the public to gain access to knowledge online — anytime and anywhere."

Zuo said such amateur scientists complement the work of educators and professionals, and their efforts help spread knowledge about the environmental protection of plants animals.

Zhou is often asked if she gets lonely in such a solitary pursuit. Never, she replies, exuding confidence in herself.