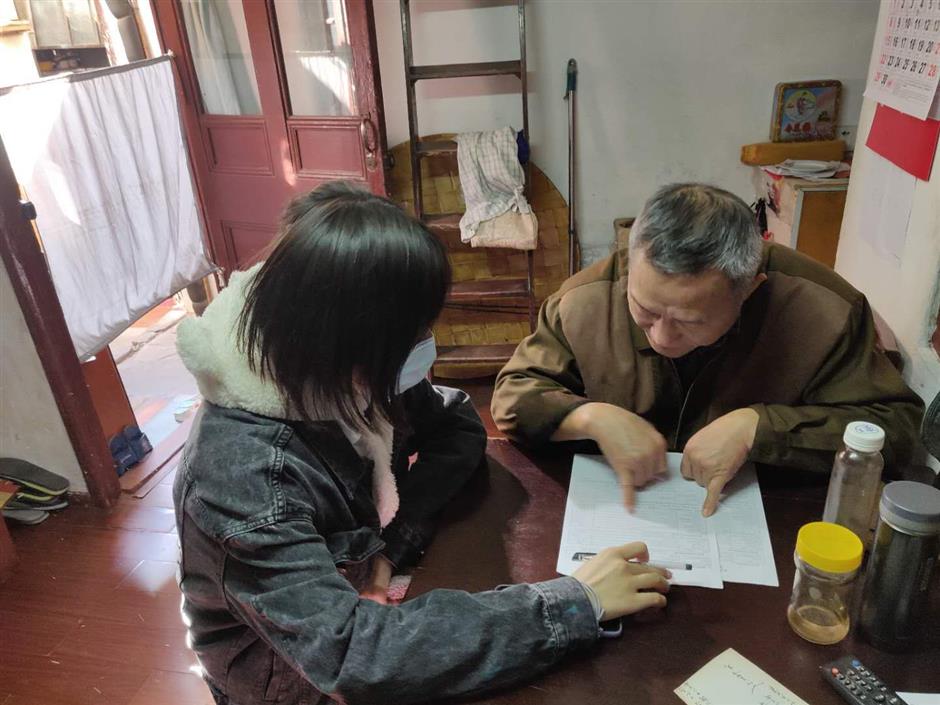 Zhang Mengxia explains ways of expropriation compensation to an elderly resident at his home living in the northern block of Qiaojia Road area in Huangpu District.

Urban renewal often means people having to leave their homes. Sometimes they are happy to bid farewell to old, derelict housing, especially if the move means relocation to better quarters. Sometimes they just plain want to stay where they have long lived, and it takes gentle, persistent persuasion to convince them otherwise.

Enter what are known as “expropriators” whose job it is to sell the idea of moving house when the government exercises its right to “eminent domain.”

Zhang Mengxia, 22, is part of a team of about 40 university graduates recruited by the Huangpu District No.1 Housing Expropriation Office this year.

A native of the northwestern province of Gansu, she majored in international economics and trade at the East China University of Political Science and Law in Shanghai. Unlike her classmates, she wasn’t interested in following the usual path toward work in a law firm or some other white-collar job.

"There are many reasons why I chose a job unrelated to my major,” Zhang told Shanghai Daily. “The most important one was a ‘cloud speech’ given by Zhang Guoliang, director of the office. His passion inspired me, and I saw career potential in the job.”

The job notice from the government office, posted in May, offered 100 positions at a time when coronavirus was dimming employment opportunities for job-seekers.

Zhang Guoliang’s online speech attracted nearly 490 viewers on campus, and many sent in their resumes.

"Looking at it objectively, it's not easy for the graduates to find jobs this year because of coronavirus,” said Zhang Mengxia. "But looking at it subjectively, I like the idea of a challenging job that is more than just your ordinary office work. I think things I learned at university have helped me adapt quickly to the job.” 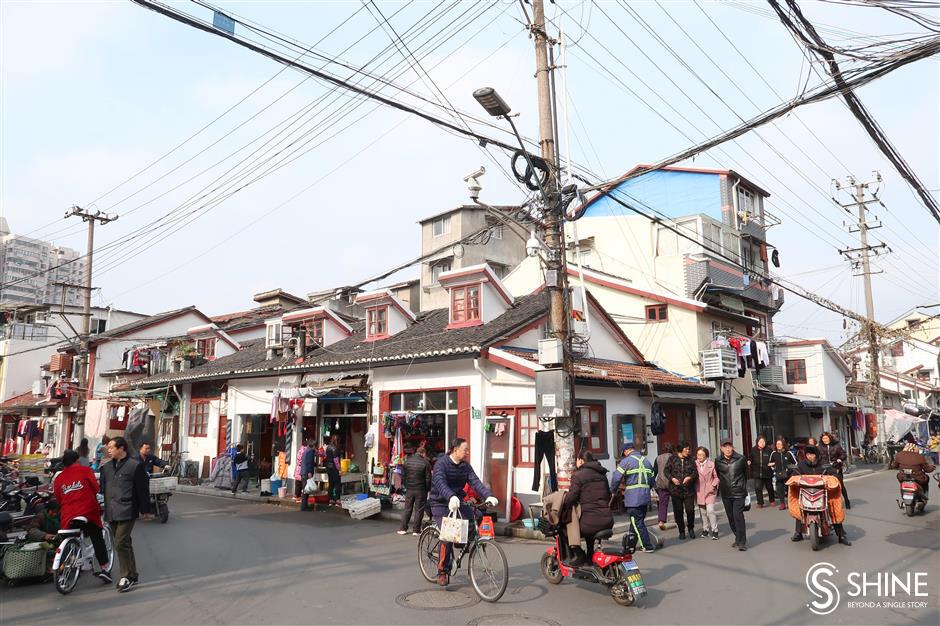 Residents in the western block of Qiaojia Road in Huangpu District will bid farewell to chamber pots and shared kitchens.

At the beginning, Zhang knew nothing about housing expropriation, and she was handicapped because she couldn’t speak or understand Shanghai dialect.

"From the start, I realized my biggest hurdle was the local dialect,” she said. “In my four years of campus life, I didn't hear too much Shanghainese. But I have confidence in my language-learning ability, and I have worked hard studying the dialect via videos.”

As an expropriator, she spends a lot of time in residents' homes.

"At first I was so nervous that it was hard to talk to them. I stuttered, and my hands trembled,” she said. "But most of the residents listened to me patiently and understood why I was there. That helped a lot. "

One of the relocation projects the office is handling is located on the northern block of Qiaojia Road in Huangpu, the last remaining downtown ghetto. The first stage involves about 2,500 households.

In August, all of the residents living in the block agreed to relocate, according to the first round of survey. Relocation can begin as soon as 85 percent of residents put their names on the dotted line. They can move to designated new housing elsewhere or receive cash compensation to purchase new homes on their own.

The neighborhood was in decay. Housing built for only one family was jammed with five or six, and most residents were still using chamber pots because their homes had no toilets.

Huangpu has the largest volume of old neighborhoods awaiting modernization. The district aims to have chamber pots eliminated by 2022.

Nowadays, the work of explaining relocation to residents has calmed for Zhang, at about 10 in the morning on Friday, she arrived at the office and made a list of residents she needed to contact. 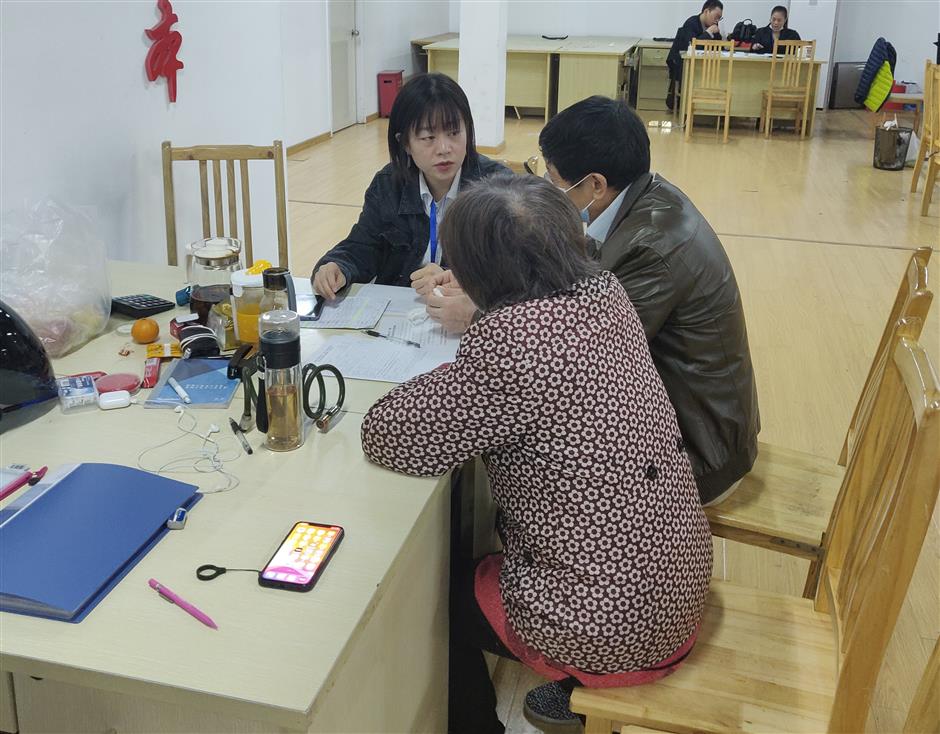 Zhang Mengxia explains policies and laws related to expropriation compensation to elderly residents at her office.

Since one of the homeowners are now in the US, and the time difference makes communications difficult, so she put them at the top of her to-do list.

Zhang and her team partner list the problems raised by residents and decide how to best tackle them. They often start home visits after 3pm so as not to disturb people who might be taking an afternoon nap.

One resident, whom Zhang refers to only as Auntie Cao, came to the office but was unhappy about the way she was received. Zhang said she had to work hard to win her trust, but they now get on very well.

"She knows that I'm from a distant province and working alone in Shanghai," Zhang said. "She told me that I could stay with her if I had nowhere to live.”

For Yang Zejun, a Shanghai native and graduate majoring in Japanese at Shanghai Jian Qiao University, the work of housing expropriation hasn’t been too hard. He said past parttime work had strengthened his communications skills.

"I wanted to do grassroots work, which I think will teach me a lot,” Yang told Shanghai Daily. “My family support my choice."

He said he recalls his first in-home visit.

“I couldn't express myself well because I was so nervous,” he said. “I have gotten over that. But now we do encounter situations where residents don’t trust us and refuse to speak with us. It’s often a slow process to win them over and get them to accept expropriation."

He cited one case where a resident flatly refused to talk to team members. They were fortunate to latch onto the resident’s elder sister, who paved the way for them. Once the housing policy was carefully explained to her, she persuaded her brother to talk with Yang.

Team members learn a lot about the history and even culture of old neighborhoods by talking to residents.

Zhang Guoliang praises the young people on the team.

"They have imagination and creative thinking,” he said. “All they need is some guidance. We encourage them to do their own research and exchange ideas with us."

Beginning in the 1990s, Shanghai accelerated the pace of renovation of old urban areas. In the first stages, there was a lot of resistance from residents, largely because urban renewal was a relatively new phenomenon and its policies weren’t always clear. Government representatives who came to talk with them were considered the enemy.

In September 2007, the city's first group of about 30 university graduate expropriators was recruited. Some people questioned whether they were too young and experienced to handle the job.

The newcomers underwent training, and a new format was adopted to create neighborhood representatives to liaise with government agents. Residents were given a bigger voice in demolition and relocation plans.

When the expropriation office sought to install a computer system, graduate Li Ruiliang volunteered his skills to help create what would be more transparent digital work practices. Months later, an online system was in place for information searches and monitoring of contract signings with residents.

Graduate students have proven so adept at expropriation work that the office now focuses on campuses for recruitment. The young staff come from all backgrounds. Most of them prize work that involves social responsibility.

"I believe young people today want to prove their worth to society,” said Zhang Mengxia. “Many want to work in villages that need help. Or they want to start their own businesses. They contribute energy and dedication to the development of society.”