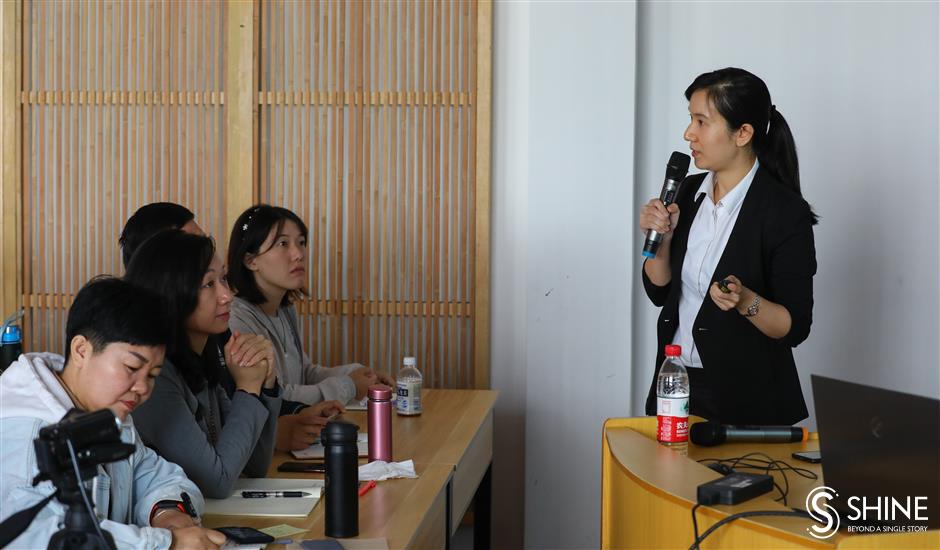 Wang Fengshuo, a postgraduate of Buddhist studies at Harvard University's Divinity School, teaches about the philosophy of life and death from both Eastern and Western perspectives.

“You matter because of who you are. You matter to the last moment of your life, and we will do all we can, not only to help you die peacefully, but also to live until you die.”

Her words resonate with the philosophy of Jade Buddha Temple. The religious site in Shanghai wants to alleviate the fear and suffering of terminal illness by training volunteers on how to give those near death comfort, dignity and quality of life.

The more-than-130-year-old downtown temple has signed an agreement with the Community Health Association of Shanghai to carry out the training for community health centers across the city.

The first group of 44 students, aged from 18 to 62, finished a six-day training session on November 1.

“I vow to dedicate myself to helping others and to maintaining the holiness of life and honor of caring, and showing utmost respect for human life,” the students recite as a pledge at graduation.

Their training allows the graduates to serve in local hospitals and in people’s homes as volunteers.

The class spent three weekends studying life philosophy, psychology and caring skills with17 medical and psychological experts, including senior doctors, academics and a member of the US Spiritual Care Association.

Hospice care originated in Europe during medieval times. It focuses on symptoms management and comfort care for the terminally ill. Compassion and gentleness are the major aspects of caring for people in their final weeks or months of life.

Hospice care in China has lagged behind Western countries, perhaps because of the nation’s tradition of filial piety and certain taboos surrounding death. The national health authority began promoting hospice care in 2017.

Shanghai and more than 70 other Chinese cities are serving as test sites for hospice care, but professionals in the field are still in short supply.

All 246 community health centers in Shanghai have begun hospice care programs. In the year to August 2020, some 11,600 terminally ill people received hospice services, according to city health authorities.

Participants take photos of teacher's notes during a training class.

Zhang Chao, a local insurance agent, lost his father, grandparents and sister-in-law in the last decade.

After witnessing their miserable last days in hospitals in his hometown in central China’s Henan Province, he decided to learn about caring for the terminally ill. He was one of the few male students in the temple class.

“I think we men have certain advantages over our female counterparts because of our physical strength and magnetic voices,” said the former radio host. “People are always happy to welcome the birth of a new life, but they tend to neglect the needs of those leaving life.”

He added, “In the classes, I learned how to treat the death of my relatives properly and how to help them spend their last days with respect and peace.”

Classmate Wang Lijing, a Shanghai native who was working in the Lotte World Tower in Seoul, returned home from South Korea to learn professional hospice care.

Her mother died when Wang was 14, leaving her father to raise her.

“I was wondering how I would care for my father, my only relative, when he gets older,” said Wang, who plans to pursue study at a more senior level to become a hospice care professional.

“I believe in Buddhism and that my contribution to others will bring a good destiny to both me and my father,” she added. 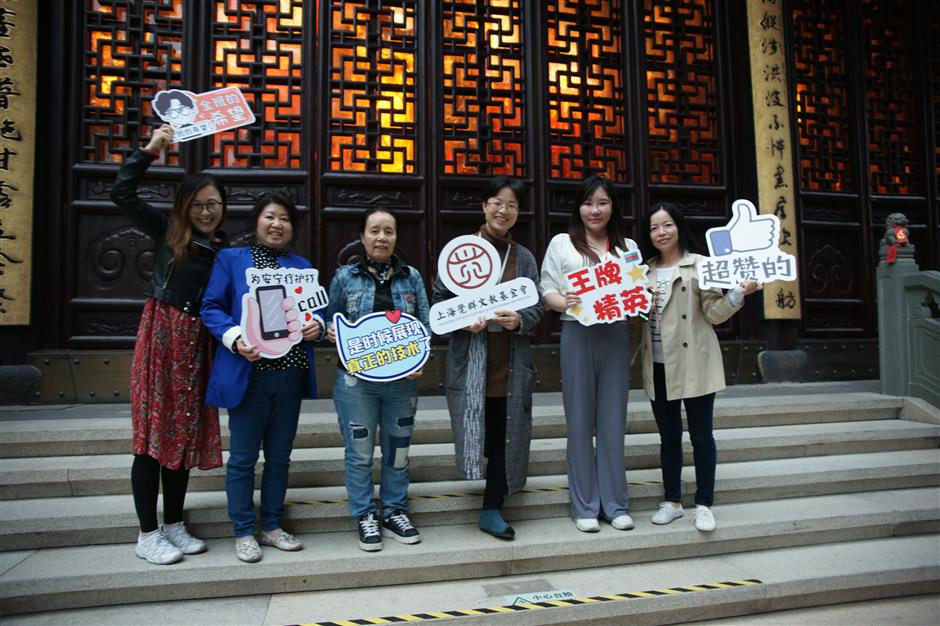 Wang Lijing (second from right), a member of the first hospice class, poses with her classmates at the temple.

The temple covers all the cost of training, but students have to pledge to do at least 100 hours of volunteer work within two years after graduation.

After the temple posted notification of the training, 193 people applied to take part. The 44 participants were selected after exams and interviews.

"Shanghai, as a megacity, has an increasingly graying population,” said Jue Xing, abbot of the temple. “We believe all of society should pay attention to hospice care under such circumstances. To better meet these social demands, we launched this project.”

By the end of 2019, the number of residents 60 years or older in Shanghai stood at 5.2 million, or 35 percent of the city’s registered population.

“Previous charitable projects initiated by the temple focused more on the physical needs of the elderly,” said Hui Jue, secretary-general of the temple’s Juequn Culture and Education Foundation. “The latest program aims to address the mental needs of life and death issues.” 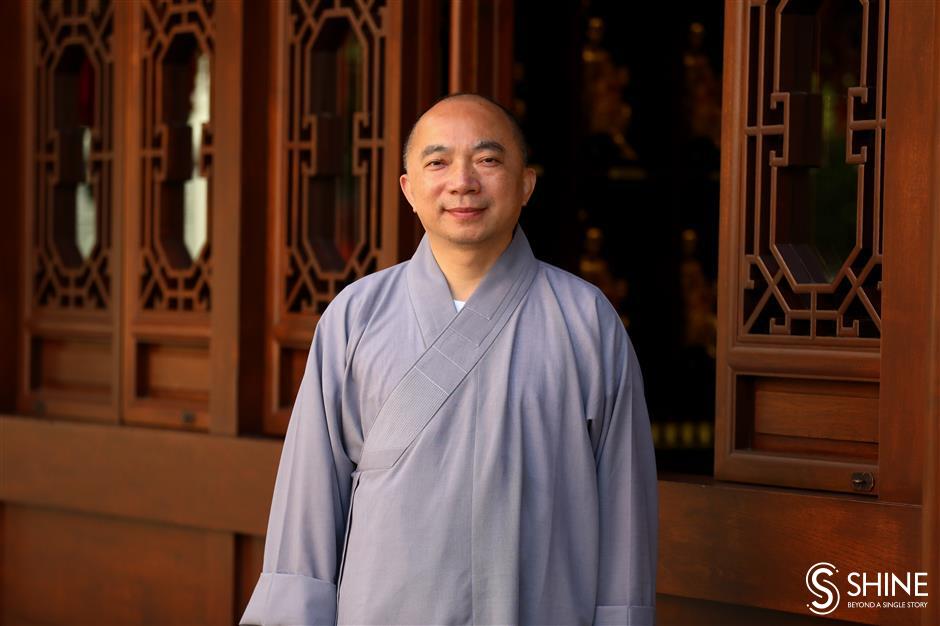 Hui Jue left his hometown in neighboring Jiangsu Province to study at the Shanghai Buddhist School at the temple in 1985, when he was 18 years old. He later focused on charity projects of the temple, and now he serves as deputy head of the Shanghai Charity Foundation (Putuo) and as a political advisor to the district.

Education on dealing with the dying is scarce in China, but Buddhism addresses the issue well and clearly, he said.

The cycle of birth and death, for instance, is one of the core theories of Buddhism, which teaches people to keep active during life and remain positive about death. It leads people to treat life and death more naturally, while Zen meditation enlightens people to understand the truth of life, said Hui Jue.

The training courses are not limited, however, to Buddhist doctrine.

Wang Fengshuo, a postgraduate of Buddhist studies at Harvard University's Divinity School and a member of the US Spiritual Care Association, teaches temple classes about the philosophy of life and death from both Eastern and Western perspectives.

“Despite cultural differences, Chinese and Western philosophers share a common focus on life and death,” Wang said. “The lesson I gave at the temple is aimed at helping students think about and understand the issue from multiple perspectives."

After serving as a spiritual caregiver in the United States for years, she returned to China and has been participating in life-care work for the temple foundation since 2018.

"An urban temple in downtown Shanghai is an ideal place to promote Buddhist thanatology (the study of death) and meet the needs of modern people," she added. 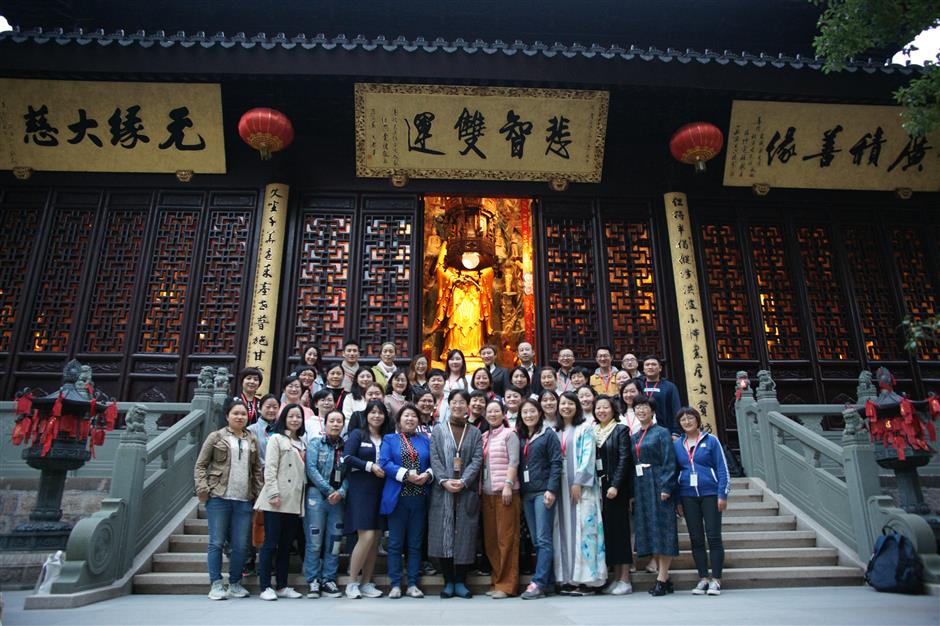 Graduates from the first hospice class pose at the temple.

Apart from the hospice training program, the temple also plans to contribute to caring and education for new retirees, young office workers and juveniles.

“We invite institutes of professional research and life care from across the world to join in these programs,” said Hui Jue. “It was the original purpose of Buddha to help people relieve the pain of birth, aging, illness and death.”