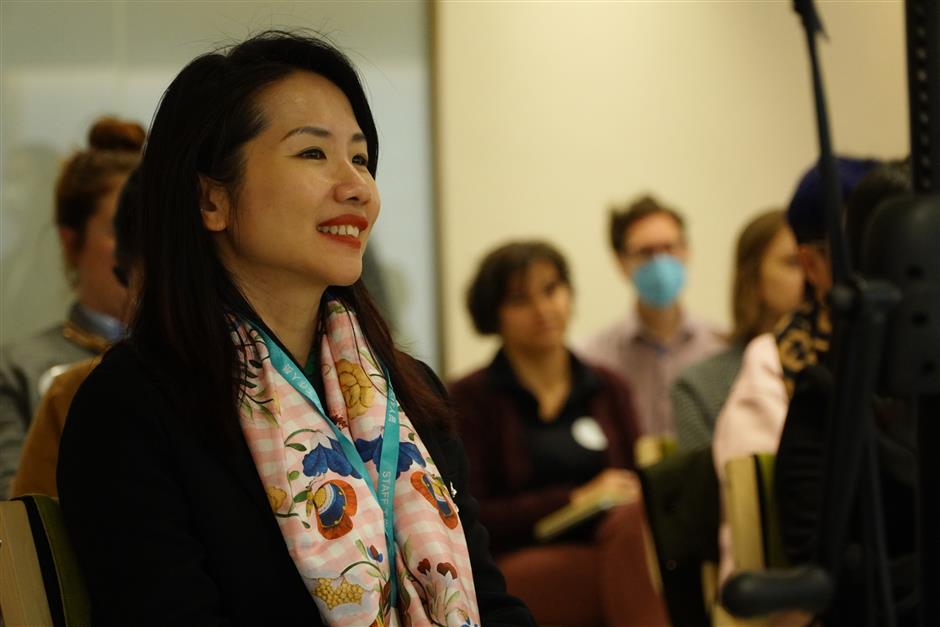 Without challenges, you live in your bubble. I'm in my bubble. He is in his bubble. But when the challenge comes, then, the opportunity is for all these bubbles to be burst and then we come together to make it work.

This is Linda Painan’s 25th year in Shanghai.

Being a Singaporean born in Indonesia, she used to be a top student back in Boston University and a member of Beta Gamma Sigma, a famed business honor society, who had rich experience later in many fields such as finance and retail. And by the way, she also established her own food management company in Shanghai.

With so many hashtags, It is wondered which one she would pick to define herself.

“I’m a full-time volunteer, then a part-time female entrepreneur,” she replied.

Since 2018, Painan has been chairwoman of the Shanghai Family Life Services Center in Changning District, also known as The Expatriate Center (TEC), a nonprofit organization which aims to form a multilateral bridge among expatriates, Chinese returnees and government.

Painan recalled vividly about an African-American lady she ran into at a nail salon several years ago, who had difficulty in communicating with the service person.

As a multilingual person, Painan helped the lady with conversations. She then knew that it was supposed to be the lady’s last day in Shanghai because she couldn’t integrate well. But Painan’s warm assistance had made the lady change her mind and stay.

“There are a lot of cases such as this, where you have seen foreigners come in, and they need help because of language and cultural differences.”

Back when TEC was founded in 2018 in Changning District, there were estimated to be some 300,000 foreigners registered in Shanghai, and one-third were residing in Changning.

“Shanghai is our second home. It is a home away from home. It makes sense to be integrated in the community.”

For Painan, TEC itself is meaningful as it can help build lines connecting all the different communities, and even be life-changing for some. 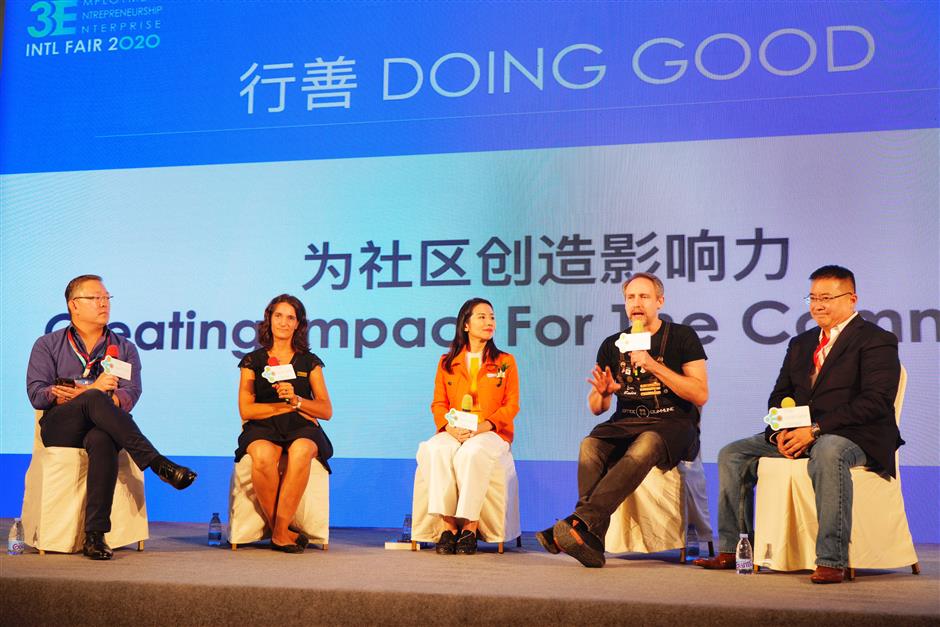 Painan (middle) attends a seminar at the INTL 3E Fair.

The center organized a job fair, INTL 3E, in September to help those left unemployed by the novel coronavirus pandemic.

Six chambers of commerce, along with 150 local companies and government offices, took part in the event to offer jobs and hold interviews.

Among them, a Singaporean company that jumped on board the night before the fair was able to offer a teaching job for an American woman who had only nine days left before her visa expired.

“She went to every single booth at the fair, and guess what, she got the ticket to continue to stay in Shanghai.”

Being an expat herself, Painan said she has grown a stronger attachment to the city day by day. “Not just feel, I experience it every day, from way in the beginning.”

She said that China is for sure developing. “I mean, it's a lot of things like your apps, your mini programs, your TikTok, online payment, and all of this is so much more advanced than what we have outside.”

During the epidemic earlier this year, when logistics and international flights were paralyzed, Painan managed to transport 200,000 facial masks from Indonesia through joint efforts by local Chinese communities in Indonesia, Singapore and China.

People had to repack the masks in crates just to catch the last flight to Shanghai, while a local cleaning company helped deliver masks for free to front-line workers just in time.

When the situation in China was gradually stabilizing, Painan’s team then started to ship masks back overseas, which she put as “one good deed deserves another.”

The mask factories in China offered to cut queues for TEC and helped them ship at fairly incredible prices during the pandemic to countries as the Philippines, France, Italy and the US.

“These caring moments, when people who have never met before bonded together selflessly, shows that the new normal created by COVID-19 is also a new shared future for all of us, both online and offline.” 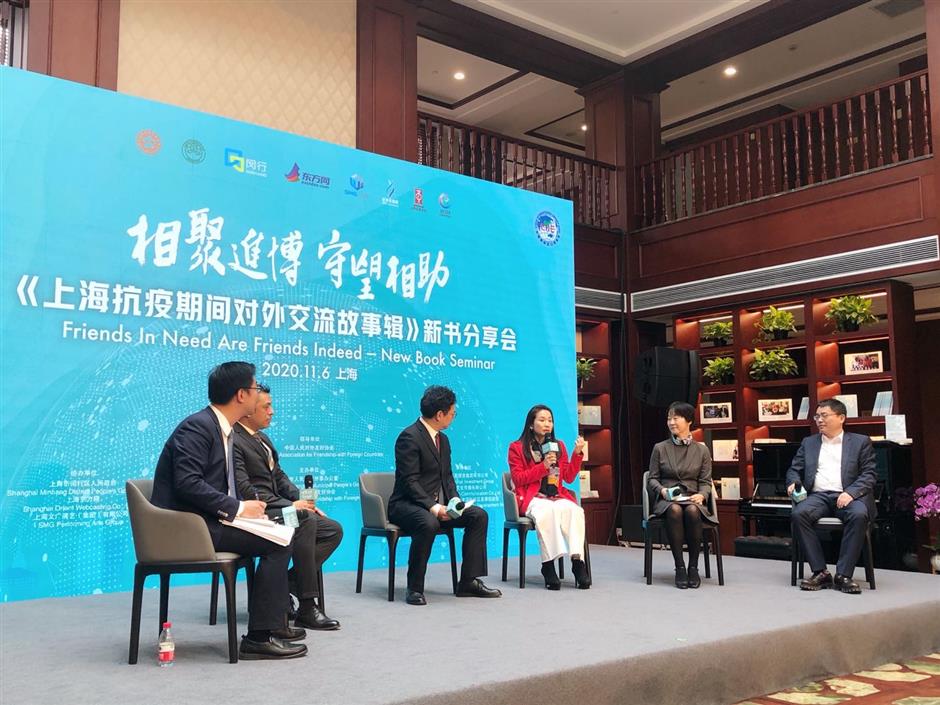 Linda Painan (center) shares her experience during the pandemic at a book seminar on November 6.

A lot of volunteers at TEC are Chinese and foreigners who serve in different positions, such as translators and consultants in communication with locals.

The center has also cooperated with local organizations such as Junior Achievement China, the Shanghai Overseas Returned Scholars Association and foreign companies for exchange panel talks. A Christmas Gala will also be held next month to raise money for public-service organizations in Shanghai.

In the longer run, TEC hopes to attract more volunteers and reach out to more domestic and international organizations.

Aside from TEC, Painan’s own company has also been reaching out to poor children in Sichuan Province through charity programs, not just donating money, but also sending teams to help build water towers for schools in mountainous area.

They have also developed one-to-one mentoring to get in touch with students there throughout the whole process, until they graduate.

Special Reports
ADVERTISEMENT
Imagine work minutes from your rural home
Bringing hope to people in Shanghai and Tibet
'Stock Grandma' dabbles in equities to fend off boredom
'Just spend' becomes bad advice for college students living beyond their means
Newfangled or traditional? A choice of tastes in annual festival snack
Is beauty to be found in 'ugly' attractions?
The power of empathy drives one man to help save the life of another
Jogging and litter cleanup: a Frenchman successfully combines both
Best friends of the blind but guide dogs still suffer social misunderstanding
A new era in relieving patients' suffering
EXPLORE SHINE