The voice of the people in lawmaking gets stronger 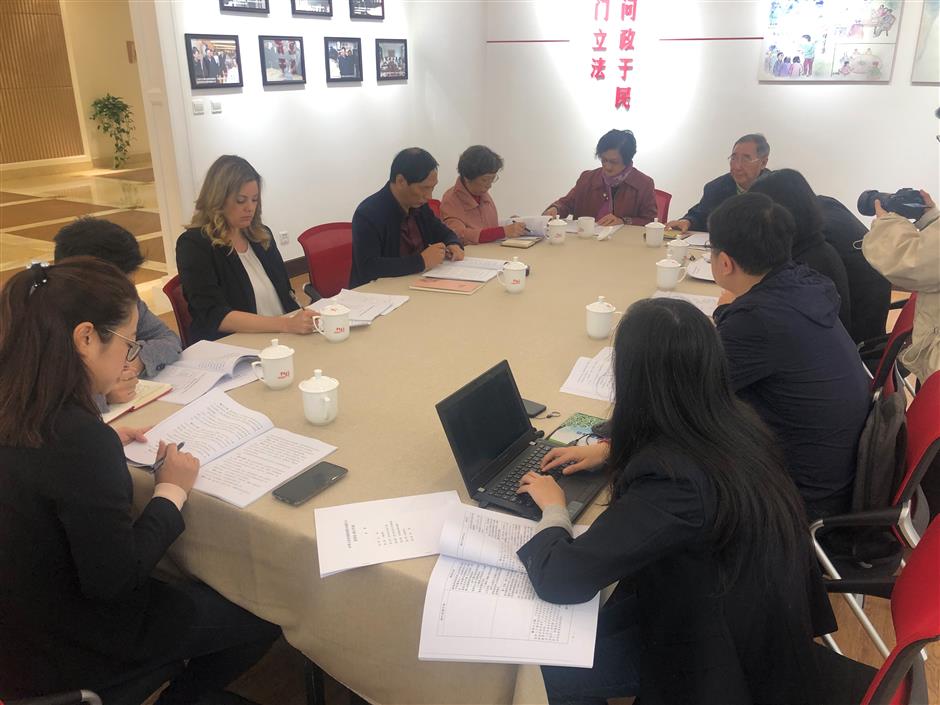 Residents of Hongqiao Subdistrict in Changning District give their opinions on the draft revisions of the national law on the protection of minors through a “grassroots legislation opinion collection spot,” a process that channels the opinions and recommendations of ordinary people to the city’s legislature and possibly on to the National People’s Congress.

Zhu Chengyi, executive director of technology startup Ispace, had an idea. He wanted to see the same specialized services available for large companies to be extended to smaller firms.

Last June, when the Shanghai People’s Congress approved a revised policy framework for smaller companies, his idea was incorporated in the legislation.

How could Zhu make it? Because he was part of a new process that channels the opinions and recommendations of ordinary people to the city’s legislature and possibly on to the National People’s Congress.

Zhu is a member of the Federation of Industry and Commerce in the Pudong New Area, where he took part in a discussion on the law revision with federation colleagues.

His community is one of 25 designated entities called “grassroots legislation opinion collection spots,” where people are invited to discuss lawmaking ideas with city legislators.

“I have taken part in various discussions on policy matters in the past,” Zhu said, “but this was the first time that an opinion of mine was included in a law.”

Indeed, the voice of the people is growing as a more inclusive system gives them greater access to lawmaking.

The 25 participating entities in Shanghai include residential communities, social organizations, a company and administrative, and legislative and judicial authorities.

They are assisting the 800 deputies of the Shanghai People’s Congress to enact legislation for the city’s 24 million residents.

The congress said it collected 1,776 suggestions for draft laws as of mid-October this year, and 143 of the grassroots recommendations have been eventually incorporated into laws and resolutions.

Gu Xiaoqing is vice director of the Office of the Committee on Legislative Affairs of the Standing Committee of the Shanghai People's Congress. He said grassroots input was sought particularly on legislation to improve the city’s business environment.

The quantity and quality of suggestions from the public are improving year by year, Gu said. Previously, public feedback was solicited after draft laws were published, not before.

“We have collected over 450 suggestions from the public regarding the law revisions affecting small and medium-sized businesses this year,” he said. “That totals the number of suggestions we heard through all channels in the previous year.”

Gu said the new system will be constantly assessed and upgraded to ensure that all issues of the greatest interest on the legislation agenda are covered.

The grassroots channel is open to draft laws, annual legislation plans, implementation of current laws and five-year plans. Legal professionals are available to help special-interest groups frame their ideas in the language of law.

Apart from roundtable discussions, suggestions are also solicited through one-on-one talks and through written submissions.

Fu Zhiqiang, vice director of the committee on congress work related to Xinjiangwan Subdistrict in Yangpu District, one of the communities included in the system, said his group is contributing ideas on improving lifestyles and social governance.

“We applied to take part in work on the regulation of public cultural services this year because that is where our strength lies,” he said. “We received positive feedback on our suggestions from the legislation team.”

“The effort of seeking scientific and democratic input to lawmaking should never be dropped,” he said.

Zhu has been lending his expertise to grassroots input related to Jiading Industrial Park on a volunteer basis.

“I think the legislature should interact more with people, informing them if their suggestions are adopted or rejected, and why,” he said. “Full-time legal professionals should also be hired.”

The concept of grassroots channels to legislatures has also been implemented in other localities in China.