After Li Ziqi became a sensation among foreigners with her YouTube videos on the rustic lifestyle and traditional food of rural Sichuan Province, an increasing number of Chinese vloggers are now focusing their sights on overseas netizens.

When it comes to wanghong, or Internet celebrities, most people might think of beautiful women in exquisite makeup and fashionable clothes parading in urban streetscapes. But the new breed of vloggers is different. The settings they present to the world are less flashy, more cultural and deeply traditional.

When a dispute over traditional clothing erupted about a month ago between Chinese and South Korean netizens on Twitter, a well-known vlogger known as Shiyin stood up to defend Chinese culture. 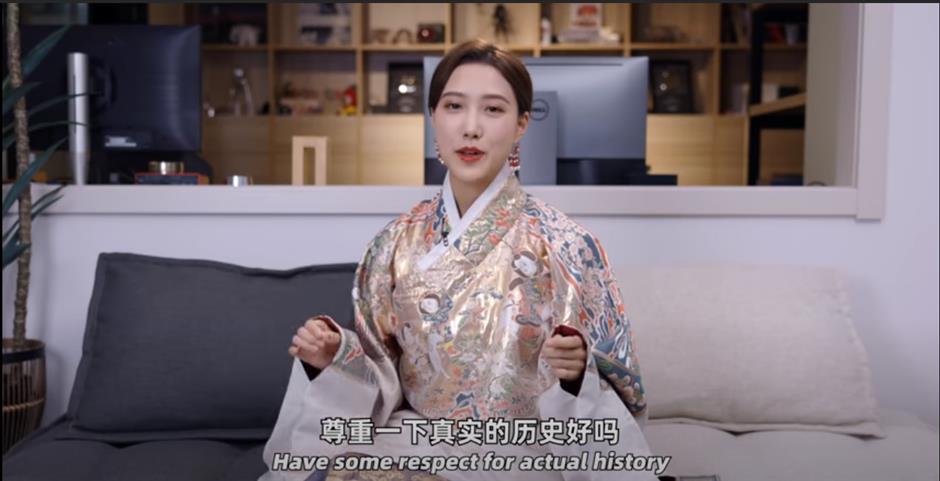 Shiyin asks people to respect history in her video after a row about traditional clothing erupted between Chinese and South Korean Twitter users.

In her video entitled "Hanfu Is Not Hanbok: Please Respect History," she explained the ancient Chinese style of clothing and its influence on neighboring countries. The video was in response to a Korean accusation that Ming Dynasty (1368-1644) hanfu copied the traditional Korean hanbok style of clothing.

Shiyin also provided what she said was evidence that hanbok had been influenced by hanfu from earlier times. She is no stranger to the subject. She has previously uploaded at least 26 short videos about hanfu clothing and traditional Chinese makeup. 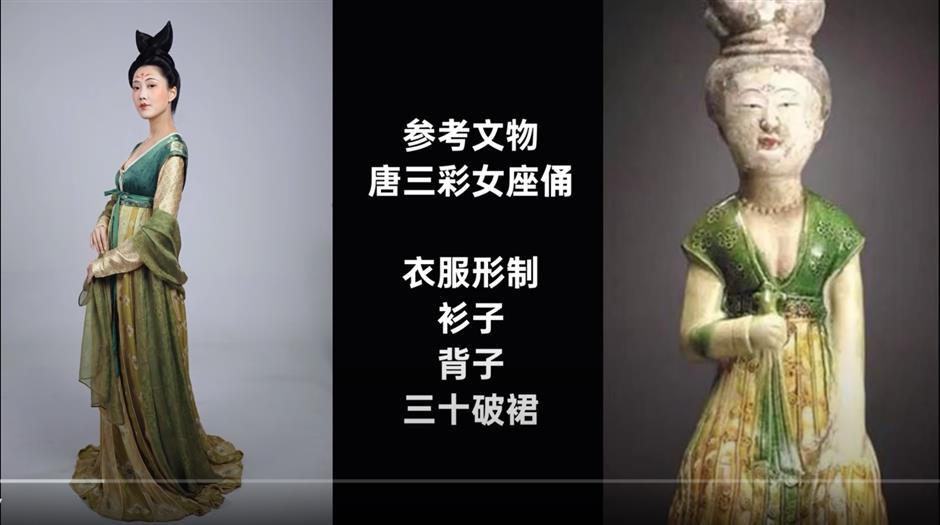 Shiyin is dressed in clothing that looks like that of a tri-color glazed pottery figurine with similar hairstyle and makeup. 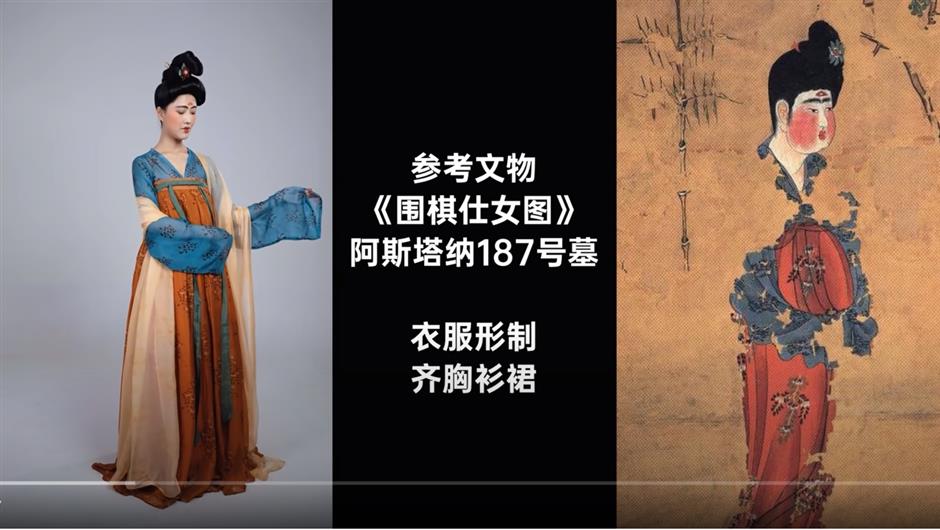 Shiyin dressed like a female character in an old painting. 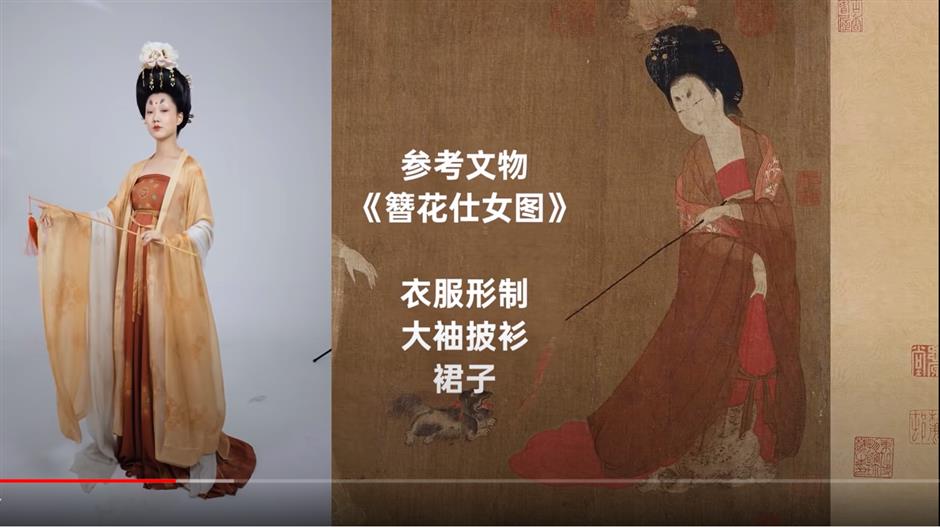 The similarities are obvious as Shiyin dresses herself iin clothing like that of a female character in an old painting.

One of her most famous videos is entitled "Illustrated Handbook of Tang Dynasty Women," wherein she describes clothing, hairstyles and makeup during the prosperous epochs of the Tang Dynasty (AD 618-907) and the Southern Tang Period (AD 937-975) of the Five Dynasties and Ten Kingdoms (AD 907-979).

Her video is credited with raising foreign interest in the Tang Dynasty, a golden age of ancient China.

"I wish Chinese dramas would explore these eras more,” said a comment from a netizen identified only as Ashley. “To see these designs on full display would be beautiful." 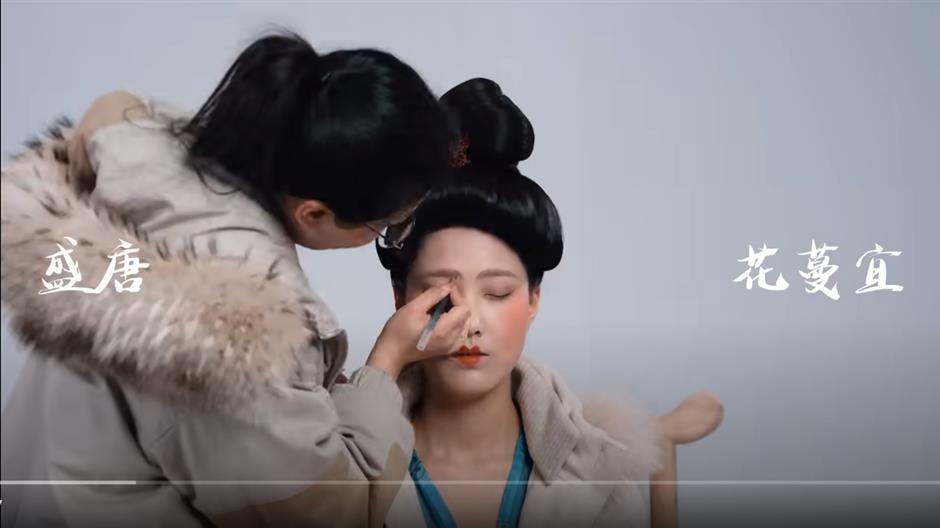 A makeup artist gives Shiyin the look of a young woman in the prosperous Tang Dynasty. 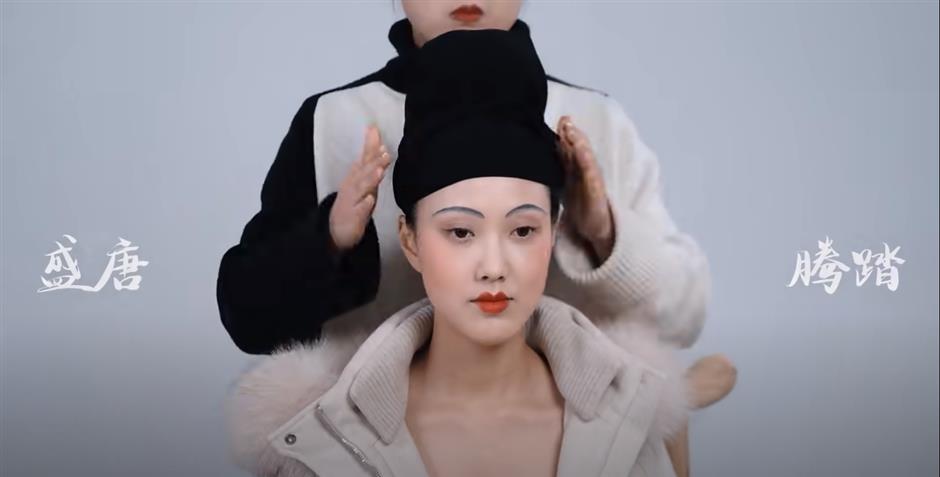 A dresser helps Shiyin with a hat that was usually worn by men in ancient times.

Shiyin made up to look like a Tang Dynasty woman in the ancient painting "Ladies Wearing Flowers in Their Hair."

Dubbed the "Demeter of China” after the Greek goddess of agriculture, she created everything from scratch. To make soy sauce, she planted soybeans. To make mayonnaise, she raised ducklings for their eggs. To make her grandmother a silk quilt to keep out the winter cold, she bred silkworms.

In her latest video, she shows how to grow taro and use it in various dishes. It has been viewed more than 10 million times on YouTube.

Li now has some 13.6 million subscribers on YouTube and more than 27 million followers on the Chinese social media platform Weibo. 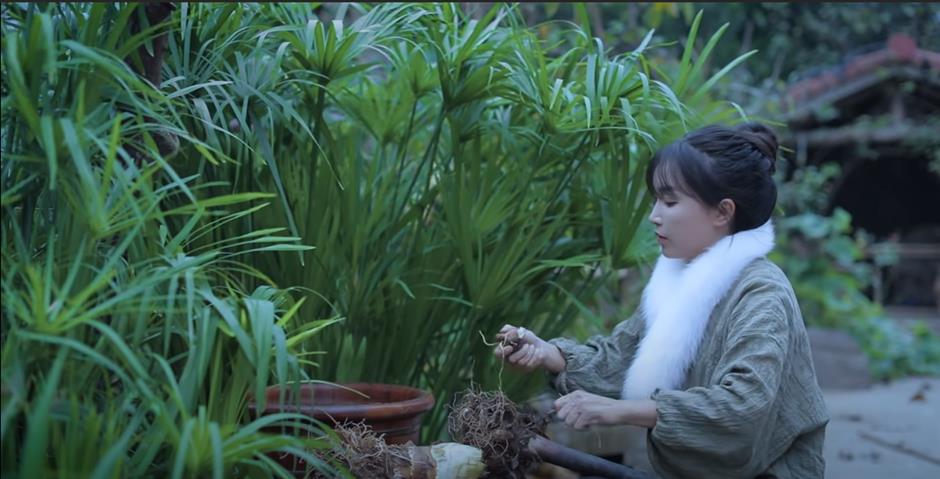 Li Ziqi collects taro in her video "The life of taro … and pepper is today’s treat."

Though her videos are polished, they still manage to convey a persona so sincere and a lifestyle so beautifully simple that they strike a special chord with viewers. Foreigners see in her a tranquility that doesn’t exist in the hectic metropolises where they live. Especially during the coronavirus pandemic, the effect is soothing.

"I spent most of my time watching Disney princess, and now I find that the true princess is here," one fan posted in a comment under one of Li's videos.

Another netizen wrote: "Teacher: What do you want to be when you grow up? Student: I once wanted to be a lawyer, but now I want to be like Li Ziqi."

Another Chinese vlogger who has amassed a foreign following goes by the nickname “Grandpa Amu,” or “Grandpa Wood.”

Off camera, he is 63-year-old Wang Dewen, who has done woodworking for over 50 years. His furniture, structure models and even a moving Peppa Pig toy are all made with traditional Chinese mortise-and-tenon joinery. No nails or glue.

Wang said he is self-taught and confesses to his share of failures away from the camera. He said he never thought of himself as an Internet celebrity.

In the year or so, he has been exploring new techniques to make more diverse and interesting wooden pieces.

"No matter what you do, if you stop learning, you will never move ahead," he said.

Wang had a miserable childhood. When he was 9 years old, his father died of an electric shock. His mother was in poor health and unable to work. Wang and his elder sister had to go to work at an early age to support the family and raise two younger brothers.

When Wang was 13, he decided he needed to learn a skill and went to nearby workshop to watch others doing woodworking. With the help of workers there, he made his first piece, a wooden pot cover for steaming buns. Three years later, he became a woodworker in his own right.

About three years ago, Wang said he discovered that existing online videos about woodworking weren’t geared for common people and considered making his own. Then an opportunity arose.

Wang's son and daughter-in-law were making a living by filming short videos, many about rural cuisine. But they were met by tepid feedback.

Last year, Wang decided to give it a try. The first video showed how Grandpa Amu made a bench from a single piece of wood.

"I wanted to make something different and see if viewers could learn how to make it from the video," he said.

The video went viral and turned Wang into a wanghong. Subsequent videos showed him making mortise-and-tenon wooden toys for his grandson.

"At that time, it felt like someone had opened a door,” his son Wang Baocheng said. “I noticed that there were not many vloggers making videos about traditional Chinese culture. So I decided to steer that way."

Wang Baocheng then filmed more than 250 short videos for his father and released them on YouTube. People from all over the world left their comments under the videos in different languages, expressing admiration for Grandpa Amu and his skills.

One viewer named Joel Simon called him “an engineer without university certificates” and said he exemplified 3D modeling “in the head,” not in computer-aided design software.

On YouTube, Dianxi Xiaoge, or “boy in western Yunnan,” is actually a young woman who uploads videos about cooking regional Yunnan Province specialties. She has accrued 6.6 million followers.

Last April, the British Broadcasting Corp aired a documentary about Du Fu, one of China’s greatest poets of the Tang Dynasty. British actor Ian McKellen, who played Gandalf in the "Lord of the Rings," read 15 poems and articles from Du, translated into English.

In May, a YouTuber calling himself "Goated Beats" uploaded a video that was originally posted on a Chinese short video-sharing platform by a Chinese social media celebrity known as Eggman because of the shape of his head.

The song’s lyrics speak of fluttering snowflakes and the cold north wind.

The music soon caught on among foreigners and created “Yi Jian Mei” fever on YouTube, with the song remixed with styles like hip-hop or funk.

"Foreigners understand Li's love for life and her motherland, and that's why her videos went viral across the world without translation,” the commentary said. “There's not a single word in her video to say that China is good, but she shows that in videos about the country and its culture.”

Internet celebrities are part of what is called the “shoppertainment” trend, which deploys online personalities called wanghong to sell merchandise via livestreaming.

In a more benevolent version of the trend, prominent vlogger Li last year linked up with an anti-poverty program to promote eggs from Sichuan's Daliang Mountain and kiwifruit from the Mengding Mountain in her videos.

Her appearance was aimed at helping sell agricultural products from the two poor areas of her home province.

However, the fame of wanghong can sometimes be fleeting, with some becoming embroiled in disputes related to false advertising.

Xinba, a famous livestreamer on the short video-sharing platform Kuaishou, came a cropper after buyers found that a tonic he was hawking, allegedly made from edible bird’s nest, was actually just sweetened water.

Xinba later apologized and admitted that the tonic was just a flavored drink whose effects were exaggerated in the livestreaming promotion. He promised to refund buyers, returning triple what they had paid.

That offer totaled some 62 million yuan (US$9.48 million). So far, consumers are still waiting for refunds. 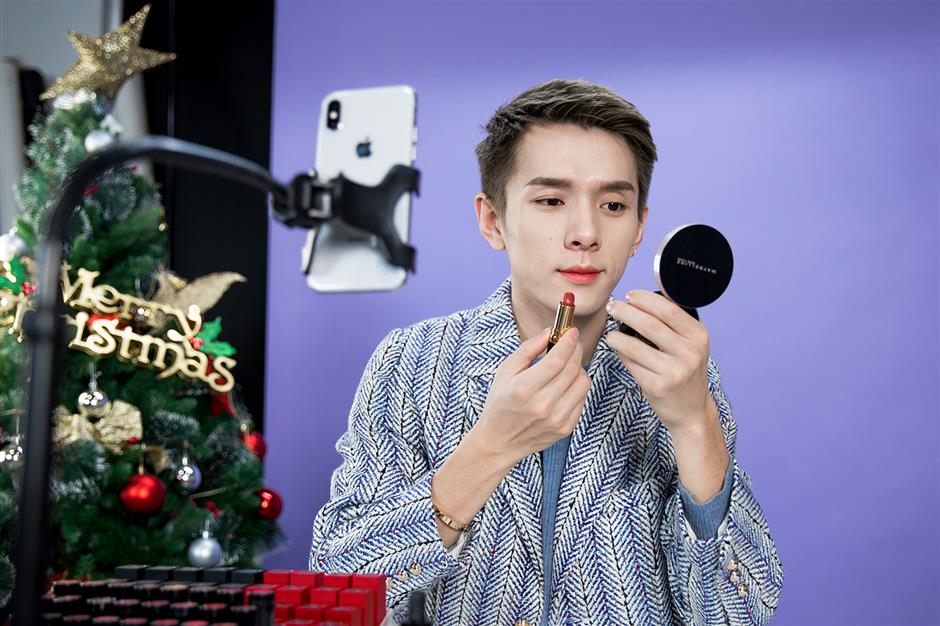 A company in Shanghai’s Chongming District, which is 49 percent owned by Li, has been fined 10,000 yuan for the breach. It involved a shampoo product that was billed as preventing hair loss.

The China Consumers Association said in a report released early last month that customers who bought sneakers through a livestreaming promotion found they couldn’t exchange shoes if they were the wrong size.

Lu Laiming, an expert with the China Consumers Association and a professor at Beijing Technology and Business University, said some aspects of “shoppertainment” activities are covered by unfair practices and consumer protection laws, but protection needs to be enhanced as the trend increases.

He advises buyers to beware — checking out products, services and sellers — before they part with their money.

Last month, the Cyberspace Administration of China, the nation’s Internet watchdog, released a draft regulation that would prohibit illegal activities in marketing goods or services to the public through online livestreaming.