A journey into Shanghai's past and present

“Are you an amateur?” I asked an old man who was playing a saxophone at a riverside park in northwestern Shanghai on a misty Sunday morning.

“Yes,” he replied, with a wide grin as he paused to answer. “It’s my second year of learning the saxophone.”

Pointing to two pals standing beside him, each holding a saxophone, he said the three of them had learned together with the same teacher, who taught them for free.

“You play well,” I said. “What’s the melody? It reverberates.”

“‘A Beautiful Fairy Tale,’” he chirped, signaling me to come closer and read the notation spread on a music stand.

“Can I take a photo of it?” I asked. “I hope I can play it with my xiao (a vertical bamboo flute) at home.”

“Sure, please,” he said, his eyes smiling. “Good for you to learn to play the flute. Its melodies are soft and soothing.”

Three old men play the saxophone at Mengqing Garden, while passers-by look on.

As we chatted, leaves from the ginkgo trees swirled in the soft wind, some falling around our feet.

About 50 meters away to our left, another man was also playing his saxophone. To our immediate right, in a glass room shaded by the canopy of a large tree, a woman in her 60s was flipping through her music, a saxophone in her left hand.

In this 9-hectare park on the banks of Suzhou Creek, spontaneous saxophone music played by these amateurs rose and fell as city walkers came and went. A slight smog was reported to have affected some parts of the city, but here, under skyward trees, the air was fresh with a wafting winter mist.

As I roamed the park, I saw a middle-aged woman practicing tai chi under Washingtonia palm trees, a group of young women dancing to a Tibetan melody by a stretch of wetland, and two elderly men sitting and chatting on a bench at the foot of an earth slope planted with Canary Island date palms. This past Sunday I sauntered into the park, Mengqing Garden, where I would begin a half-day walk down Suzhou Creek to explore scattered legendary places now being connected by new esplanades, or riverside pedestrian pathways.

The latest urban planning shows that, by the end of this month, the downtown part of the river will have had its 42-kilometer-long banks furnished with well-connected pedestrian paths. It’s a project following on the heels of 45-kilometer walking trails completed along the Huangpu River about two years ago.

My Sunday “venture” eventually covered about 5 kilometers, as I threaded through riverbank landscapes imbued with art and history.

I went from Mengqing Garden in Putuo District to the Shanghai Natural History Museum and a sculpture park in Jing’an District. It was a relaxing route from the northwest to the southeast along a western section of Suzhou Creek. In between I stopped at the M50 art space on Moganshan Road (Putuo District) and the Butterfly Bay Greenbelt at the intersection of Taixing Road and Kangding Road E. (Jing’an District). People rest at the Butterfly Bay Greenbelt in Jing'an District.

In this five-hour exploration, I found myself beating a quiet path unknown to me in the past. One reason I had not found the path before was a lack of continuous esplanades connecting the “dots” along the creek — parks and art spaces converted from old factories or residences, as well as preserved historical buildings.

On Sunday, however, I saw workers busy building new footpaths, which made my “venture” surprisingly fruitful.

A young engineer responsible for paving a wide footpath between the newly built Changping Road Bridge and the old Puji Road Bridge — both in Jing’an but not far from Putuo — told me the footpath would be completed that very night.

As we chatted amid the roar of bulldozers and asphalt pavers, an old man came around at a leisurely gait, his hands crossed behind his back. I struck up a conversation with him. He said he lived nearby and could not wait to have a walk on the well-shaded footpath that was beginning to take shape.

Her book consists of several episodes through which she reflects on the river’s reincarnation from pollution to purification. 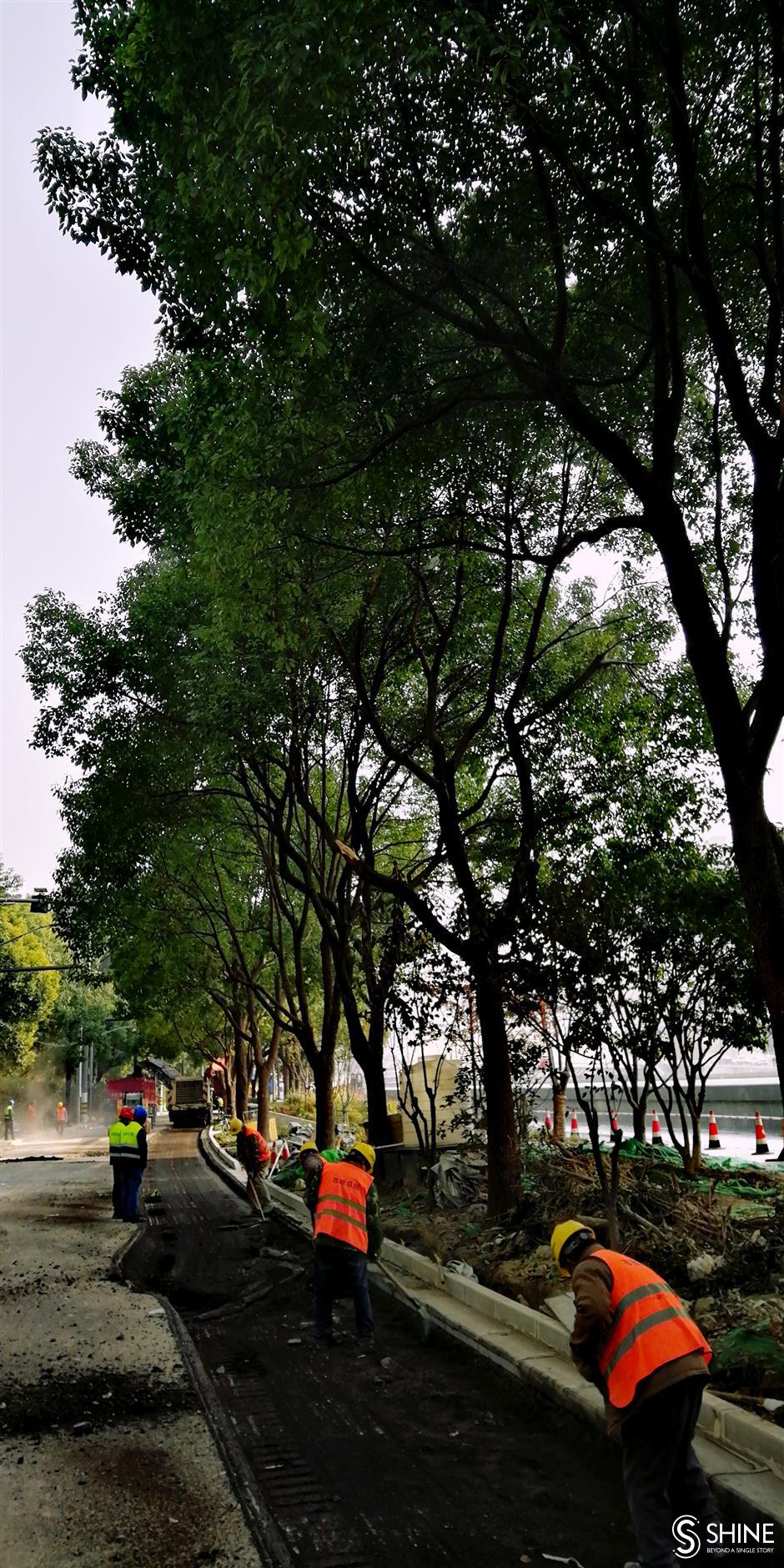 Dubbed as Shanghai’s mother river and the cradle of the city’s homegrown industries and entrepreneurs in modern times, the creek was once heavily polluted. According to an article on China.org.cn, the river’s history of pollution can be traced back to the 1920s.

According to Pan, the river was “black and stinky” for 22 days in 1963 and 151 days in 1981. When she witnessed dragon boat races on the river in the first decade of the 21st century, she said she could feel that the water had become cleaner. “How could dragon boats move in messy water?” she wrote, betraying her sense of great relief.

Wang Anyi, another local writer, was quoted in Pan’s book as having depicted a clean Suzhou Creek with riverbanks full of rapeseed flowers and picturesque residences of the rank-and-file and storage houses. Pan said Wang might have been inspired by a trip to Suzhou Creek sometime in the 1990s.

In 1988, Shanghai decided to clean the creek with a vengeance. More than 30 years have passed since then. The combined efforts of the government and the people have resulted in a reincarnated mother river. Now that the water is cleaner, let’s make the riverfronts more pedestrian-friendly. Let people feel it, not just watch it from a distance.

It’s a river for the people. It’s where you and I can spend half a day, even a whole day, walking along riverfront and meditating about nature, history and art. That’s where the river’s 42-kilometer esplanade project comes in. A city with a clean river, a river with continuous footpaths — that’s the dream of almost everyone looking for a happy life.

In fact, you don’t need the full five hours to walk 5 kilometers as I did. Only that in two places I stayed longer than I had planned: Mengqing Garden and the M50 art space. To a walker who likes a solitary dialogue with nature, history and art, these are the sites worth many a revisit.

A path at the back of the M50 art space

Mengqing Garden is bordered on three sides by a section of Suzhou Creek that’s U-shaped. The garden, opened in 2004 and improved over the years, is the starting point not just of a rare rambling route, but also of studying how a once-polluted river was made clean.

I had planned to have a quick walk through the park and then move on, but ended up roaming there for more than an hour, wondering how the place — once studded with polluting factories — had morphed into a peninsular-shaped park known for its biodiversity and water-purifying capacity.

After bidding farewell to the saxophone trio, I came across dozens of parallel vent pipes erected above a piece of grassland. I thought they were steel sculptures created by artists. They are not — they are real water pipes, each with one end buried deep underground. They do not pump water, however; they just allow you to hear the sound of underground water when it flows. About 6 meters under where I stood is a 30,000-cubic-meter underground reservoir that stores rainwater. It serves to prevent a rush of untreated rainwater from polluting the creek.

It took me about half an hour to walk from the garden to the M50 art space, including time I spent trying to compare different routes. I had heard of the space a long time before but had never visited it.

I fell in love with it the moment I entered it by chance on Sunday. It was not because of its art atmosphere, for which it is so well-known. It was because of its historical memory.

As I ambled around, I found myself lost in a labyrinth of old factory houses built from 1933 to 1990. The art hub was formerly the site of New China Textile Co Ltd, founded by a leading Chinese entrepreneur.

By preserving so many factory houses and facilities of those bygone years, the art space is one of the most outstanding places to showcase the city’s modern history of homegrown industries. A corner of the M50, where an old factory house has been preserved

At one end of the art space is a well-paved pedestrian path. I sat down on a bench, looking at the boats on creek, my thoughts going silently back to the early 20th century.

A few steps away from the pedestrian path, a new riverfront footpath was being built to connect the art space with many landscapes to its southeast, including the Butterfly Bay Greenbelt in Jing’an District.

As I went further southeast from the greenbelt, I came across many old buildings, each with a revolutionary story to tell. They are living textbooks on how our city was liberated and built by our revolutionary forefathers who had risked or sacrificed their lives for the happiness of others.

At the end of my five-hour city walk, I silently saluted our forefathers who had made peace and prosperity possible for us. Silently, too, I saluted the workers who were racing against time to build and connect esplanades so that we could stay close to, and draw strength from, nature and history. Premier Zhou Enlai once worked in a building not far from what is now the Jing'an Sculpture Park. Some old residential buildings near Jing'an Sculpture Park are painted with murals to "recreate" the life of a bygone era.

Suzhou Creek is part of the 125-kilometer-long Wusong River that flows out of Taihu Lake. In the mid-19th century, foreigners began to use the creek's name when referring to the Shanghai section of the river. In 1848, an official of the Qing Dynasty (1644-1911) formally adopted the name in a document for the first time.

In the 1920s, the 54-kilometer Suzhou Creek became a cradle of modern homegrown industries. By the 1930s, Suzhou Creek had been a transportation artery and was dubbed the Oriental Rhine River.

With rapid industrial development, however, the creek became polluted. Shanghai launched a massive project in 1988 to clean it, and the water quality has greatly improved. By the end of this year, the creek's 42-kilometer downtown riverbanks will be connected to continuous footpaths, enabling people to appreciate well-preserved historical architecture.

Opened in 2004 and located on Yichang Road, Mengqing Garden is Shanghai’s first flowing water park. Covering about 9 hectares, the park features a hydraulic-powered waterwheel modeled after the style of those invented during the Song Dynasty (960-1279).

The waterwheel pumps water from Suzhou Creek into the park for treatment through slopes and wetlands. The treated water then flows back to the creek. The park also has Shanghai’s largest underground reservoir to treat rainwater, which prevents untreated torrential rain from polluting the creek.

The site of the garden was formerly one of the most polluted areas along the downtown portion of Suzhou Creek. Union Brewery, once the largest beer factory in the Far East, used to be located here. It was designed by L.E. Hudec and began operating in 1935. One of the factory’s buildings has been converted into an exhibition hall and education center.

Special Reports
ADVERTISEMENT
61953
,
62425
,
A walk along Suzhou Creek is a trip back in Shanghai's historical past
The need for a Swiss army knife in the connected world
Rural residents encouraged to keep their guard up over holiday
China's positive economic performance is good for all
Hosting WHO team shows support for origin-tracing
More trains and faster trips for Spring Festival travel rush
Temporary hospital for COVID-19 patients built in Hong Kong
Trump delivers farewell speech touting achievements during presidency
China's FDI inflow up 6.2% to record high in 2020
Chinese mainland reports 103 new COVID-19 cases
EXPLORE SHINE