Self-driving cars start appearing on streets. Will people accept them? 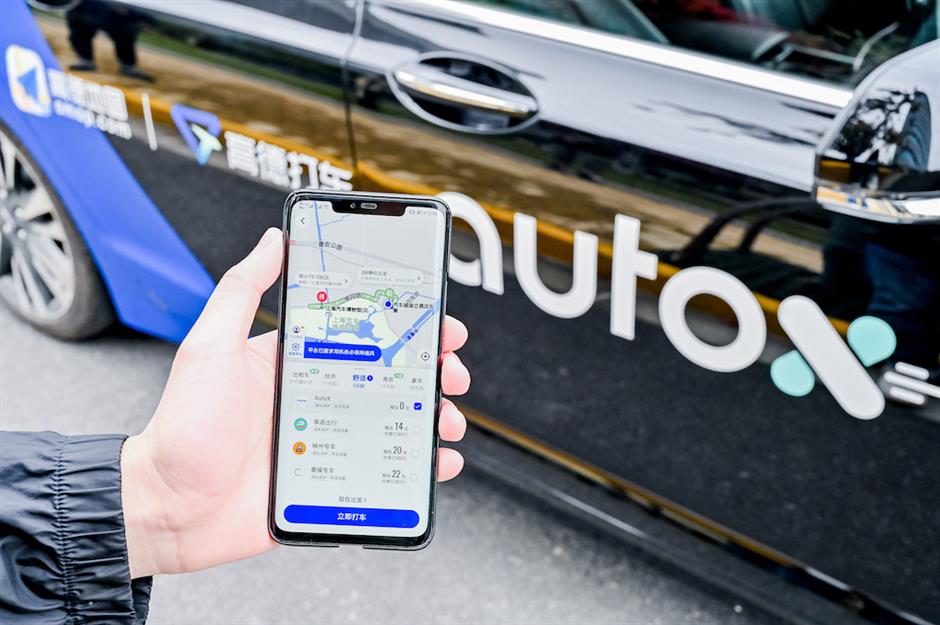 Robotaxis have begun operating on the streets in major cities like Shanghai, Beijing and Shenzhen. Registered on the mobile app for a robotaxis, users can experience the latest technology.

The COVID-19 pandemic hasn’t dented China’s development of self-driving vehicles. In the latest progress, robotaxis have begun operating on the streets in major cities like Shanghai, Beijing and Shenzhen.

With the government supporting autonomous driving as part of its “smart economy” strategy, Chinese and multinational carmakers are now trying to offer rides to ordinary people to test the new technology and ease anxieties about its safety.

Companies such as Didi Chuxing, China's largest ride-hailing company, Internet giant Baidu and autonomous driving startup Pony.ai are among those moving into later stages of commercializing the cars of the future.

AutoX, an autonomous driving startup backed by Alibaba, announced this month that it is rolling out fully driverless robotaxis on public roads in the southern city of Shenzhen. AutoX said it is the first time that cars without drivers or remote controllers are operating on the streets of China.

Robotaxi projects have been launched in several Chinese cities, but in most cases, they still have a “safety” driver inside the vehicle who can take over in case of any emergency.

China is aiming for vehicles with at least partial self-driving technology to comprise 50 percent of new car sales by 2025, doubling its previous goal.

In 2017, the country called for Level 2 and Level 3 vehicles to make up 25 percent of new car sales by that year. Level 2 assists the driver with steering, acceleration and braking, while Level 3 covers vehicles driving themselves, under certain conditions, on highways.

China said Level 2 or Level 3 new vehicles will account for 70 percent of sales by 2030.

At present, companies operating self-driving vehicles on public roads must obtain consent and special license plates from local authorities. In Shanghai, companies need to pass a test of their vehicles in an enclosed testing area before going on public roads.

But is the public ready to ride in cars driven by computers?

Suburban Shanghai's Jiading District, an automaking and vehicle-testing hub in the city, is gradually promoting ways for the public to experience automated driving. Most of my friends who live in the district say they are supportive of self-driving vehicles and willing to give them a try.

Robotaxi from Didi Chuxing, China's largest ride-hailing company, is captured on a road in Shanghai's Jiading District in June.

A friend of mine surnamed Wang, 31, who works in Jiading at SAIC Volkswagen, said he tried robotaxi services in June. Although he liked the experience, he said he understands the reluctance of many people toward trusting autonomous driving.

Wang registered on the Didi Chuxing app for a robotaxis. Since June, the ride-hailing service has begun trial runs of a self-driving service on designated test roads in Jiading.

Wang said he wanted to experience the new technology and, better yet, the taxi ride was free. The vehicle he took had a hands-off Didi employee in the driver's seat in case of problems. Otherwise, the cab trip was like any other, Wang said.

The difference, of course, is in the technology attached to robocars. Radar on the roof rotates at high speed to receive signals and navigate the vehicle. Under the radar, there’s a camera viewing the real-time road situation.

Wang attributes some public trepidation about the new-wave cars to fear of the unknown.

“It will take a long time for people to understand and accept self-driving vehicles,” he said. 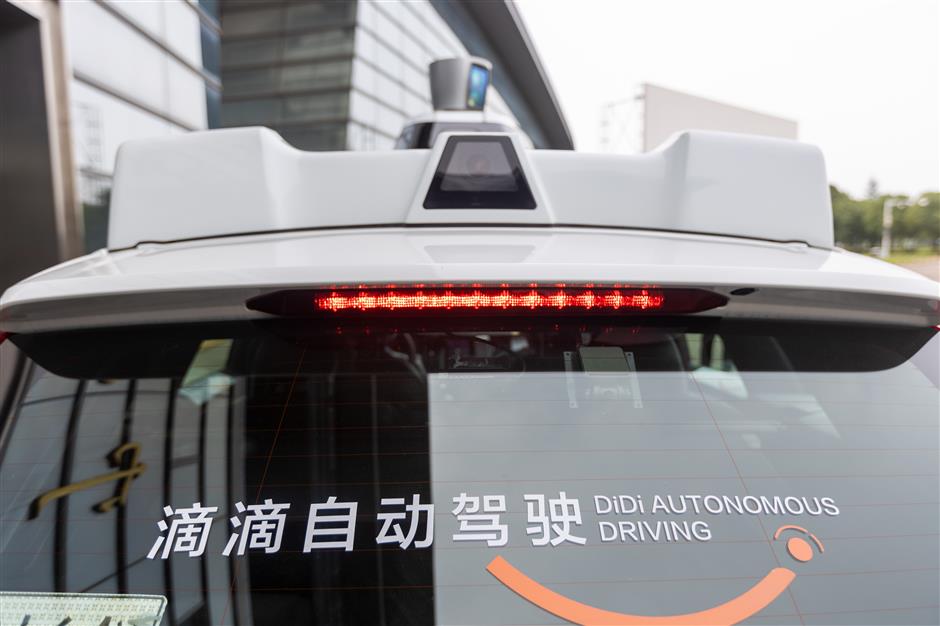 Radar rotates at high speed to receive signals and navigate the vehicle. Under the radar, there’s a camera viewing the real-time road situation.

Karl Fuchs, vice president and head of innovation and technology at Continental China, a German auto-parts manufacturer, told Shanghai Daily that consumers will eventually come around to accepting automated driving.

“Chinese consumers are generally positive about it,” he said. “The gradual implementation of 5G technology and the launch of the Intelligent Connectivity Vehicle Development Strategy will effectively promote the implementation of automated driving in China.”

Globally, accidents have occurred in self-driving cars. They make the headlines, giving grist to public debate about the safety of the vehicles. That concern is especially acute in China, where road conditions can be rather unpredictable.

According to Fuchs, automated driving will start on motorways because they present fewer complex scenarios than downtown streets.

“At a busy intersection, for example, pedestrians, cyclists and oncoming traffic must all be reliably identified by an automated car,” he said. “A comprehensive understanding of the environment is necessary, and that goes far beyond what is available today.”

He noted all the various complexities of city streets, such as tunnels, ramps, cut-in and cut-out driving habits, road construction and bicycles, that complicate the programming of self-driving cars.

“Improvements in traffic regulations would further promote advanced driver-assisted systems,” Zhang said. “Eventually, the market will enter the era of safe travel, where the reliability of autonomous driving is widely recognized and people are willing to accept the convenience and the value it generates.”

Market players are taking steps to improve the safety of self-driving.

Continental has been introducing advanced sensors to meet highly automated driving needs. For example, its fifth-generation short- and long-range radar allows more pinpoint detection of all kinds of objects, even a missing spare tire or detached exhaust pipe.

Baidu launched its robotaxis service in Beijing in October. For now, the cabs have a “safety” driver inside, who can take the temperature of passengers to guard against coronavirus and who can take over the vehicle if any emergencies occur.

There is a display screen above the center console and behind the passenger seats in front and back. The three screens simultaneously display the surrounding road conditions, including nearby vehicles, pedestrians and bicycles. They also show the vehicle's route and speed, which cannot exceed 60 kilometers per hour.

Zhang Xiaofeng, an independent market analyst, said that almost all market players attach great importance to safety. No one wants problems to occur, he said. That would set back technological development, investment and market reputation. 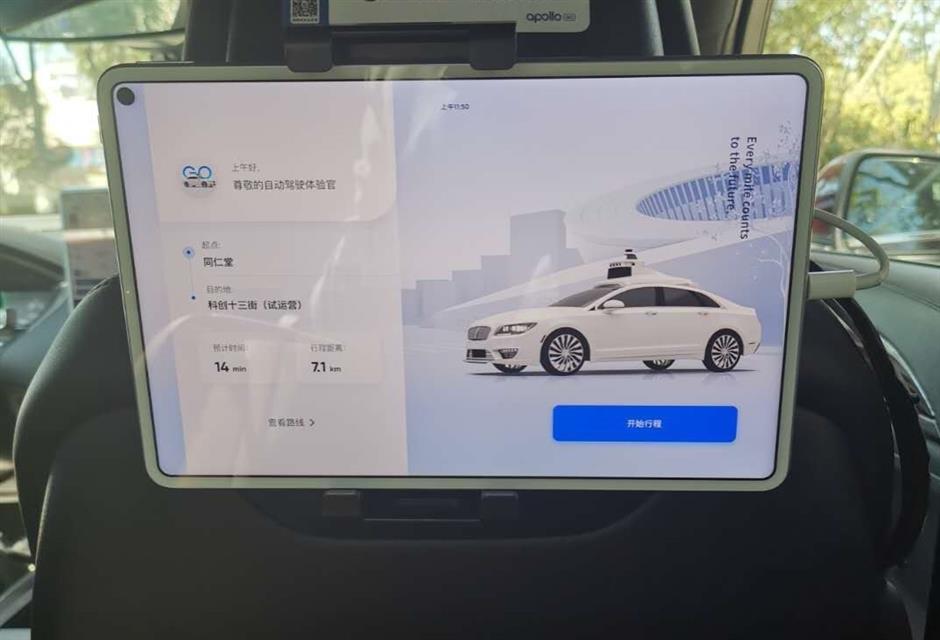 Baidu launched its robotaxis service in Beijing in October and user can view the vehicle's driving distance and speed on a display screen inside the vehicle.