Community canteens fill an important need for the elderly 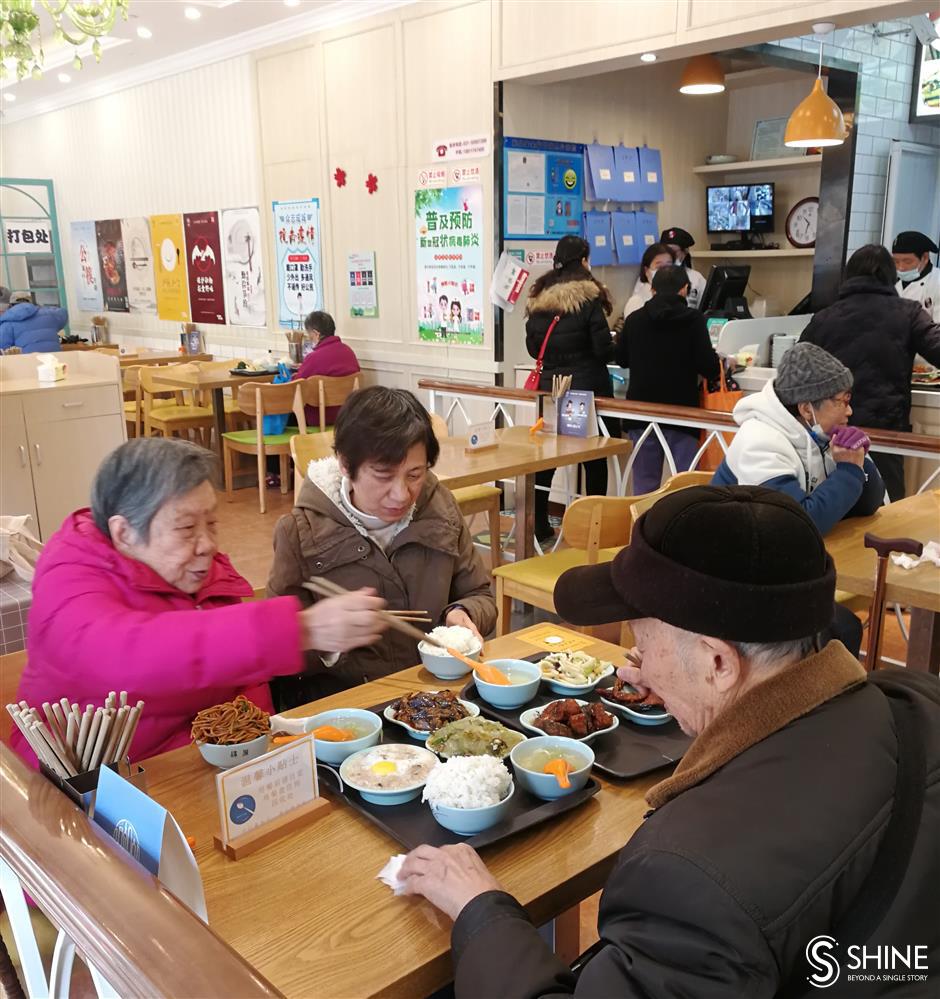 Hua Dinglong, 86, his wife and their daughter dine at the canteen from time to time. The elderly couple lives about half an hour’s walk away and near streets with an array of more costly eateries.

Regular meals and nutrition are important to the health of the elderly. To meet that need, community canteens are popping up across the city, offering good diets at reasonable prices.

Before I set out to visit the Yangjing Community Canteen at 191 Juye Road in Pudong, I debated about the best time to show up. Lunch starts at 10:30am, but I didn’t want to disturb people during their meals.

My worries turned out to be unnecessary.

Senior citizens started to appear as early as 9. They lined up their food trays, then sat down to chat and wait for mealtime. It’s a daily drill they seem to enjoy.

Elderly diners figured prominently from 10:30-11:30. After that, the diners who appeared were more mixed, including younger residents and those who work in the area.

I have passed by this canteen countless time. I used to think that the younger people there were taking advantage of a service earmarked for the elderly, probably by using the cards for their parents or grandparents. But that isn’t the case.

Tang Peirong at the Yangjing Neighborhood Comprehensive Center for Services to the Elderly explained that the canteen started as a canteen for the elderly, but is now all-inclusive. That helps make the food service more sustainable and poses no problems for the elderly diners because different age groups tend to eat at different times. Benefits to the elderly aren’t compromised — the all-inclusiveness enables the canteen to reduce its operating costs by making full use of its resources and equipment.

In fact, senior citizens still get preferential treatment, Tang said, depending on their age. For instance, those between 60-69 years get 105 yuan (US$16) worth of meals on their meal cards for a payment of 100 yuan. Those aged 70-79 get 110, and those over 80 get 115 for the same cost. The handicapped also get the highest special treatment.

Many people who get no discount at all show up there. Apparently, the meals are worth it.

Hua Dinglong, 86, his 84-year-old wife and their daughter told me they would dine at the canteen from time to time, but they pay cash for each meal.

The old couple lives on Gushan Road in Pudong, which is about half an hour’s walk away. Their daughter, who lives across the Huangpu River in Puxi, was joining them for a meal after helping her parents do some banking business nearby. They would often have their meals there whenever they happen to be nearby for business.

On this day, their three vegetable and three meat dishes, plus steamed rice and free soup cost only 64 yuan.

“The prices are reasonable compared with nearby eateries,” the elderly Hua said.

What’s more, unlike commercial premises, the canteen menu and the way the food is prepared cater to the special dietary needs of the elderly. 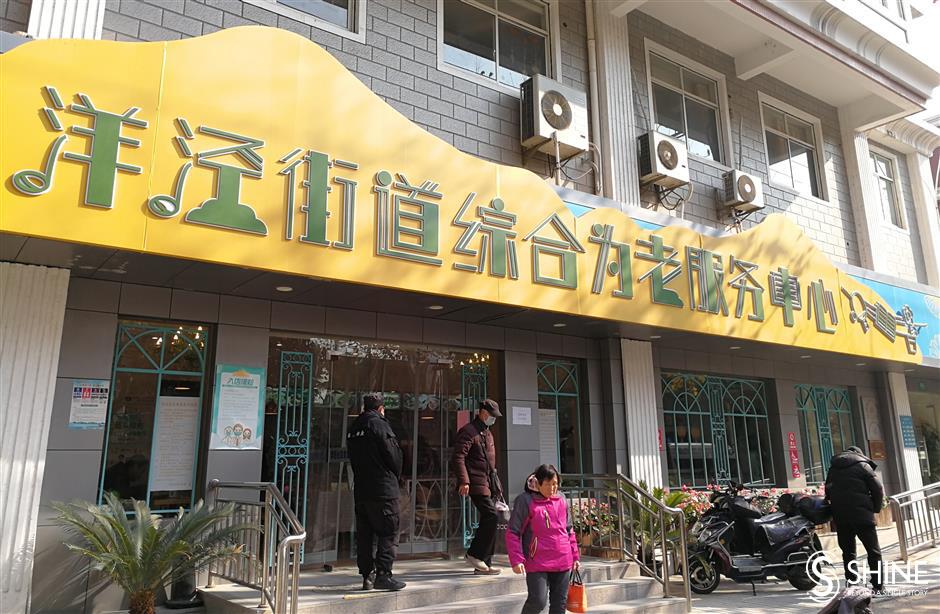 Diners leave the community canteen on Juye Road in Pudong after having lunch there. Though the canteen welcomes all people, it offers discounts to seniors and caters to their nutritional needs.

The site is operated by a contractor hired by the local neighborhood committee. The contractor pays no rent. In return, dishes catering to the needs of seniors must be provided to the elderly at prices that are competitive compared with similar dishes on the market.

Tang said that the 1,035-sqm site of the elderly care center on Juye Road was purchased by the neighborhood committee before 2012. The canteen on the first floor initially served as a food service only for the elderly. In 2017, it underwent renovation and expanded to include other diners after reopening in 2018.

Neighborhood committee members, elderly diners and nearby residents have formed a supervisory group to monitor routine operation of the canteen. For example, the group rejected the idea of starting breakfast services after a survey found low demand in a neighborhood with a plethora of breakfast providers.

Catering services for the elderly are a priority with the Shanghai government.

The Xinmin Evening News reported recently that, given this chronic lack of dedicated catering services for the elderly, a neighborhood in Bansongyuan in Huangpu District is experimenting with what is called the Cloud Elderly Care Co-op which, by leveraging smart elderly care platform, will involve more commercial catering entities in elderly care.

The platform enables the elderly to access commercially provided service at discounted prices, thanks to electronic food coupons. The elderly aged 75 and above in the neighborhood would be given a 50-yuan subsidy in their personal account on a monthly basis, which could be used to pay meal costs with the scanning of a QR code on their mobile phones.

For those who have difficulty using mobiles, the neighborhood would make small plates with the QR code printed on it.

As providers diversify and multiply, a smart platform might match better the supply with the demand.

While provision of meals for the elderly ranks top in their needs, elderly care upgrades might address the elderly’s needs beyond food.

The Juye Road canteen is planning another upgrade to implement new smart technologies, like facial recognition that would do away with meal cards that seniors often forget or lose. It would also allow food orders via mobile phones, Tang said.

There are currently some home-delivered meal services (with delivery cost sustained by the neighborhood), but the menus are limited to two sets of meals priced at 13 and 10 yuan. Smart technology could provide more options.

At the canteen, I met 79-year-old Du Guixin, who said she arrives at 8:30 every morning and goes upstairs to an activity center before coming down for lunch. After eating, she goes back upstairs for a short nap before heading home at 3pm.

Du lives alone. The canteen and activity center form the core of her daily social life.

To fill the social gaps in the lives of many older residents, the Weifang Neighborhood deploys volunteers, usually in their 60s, to maintain daily contact with those living alone. They find that many of the elderly fear loneliness more than anything else, which can lead to depression.

Residents aged 60 and over comprise about a third of the neighborhood’s population. That’s slightly less than the citywide average of 35 percent.

Services for the elderly are being upgraded across the city to provide a wider range of help. Efforts are underway to coordinate resources, bringing together agencies and organizations that provide help to seniors. The aim is to move beyond places where senior citizens are fed to places where they can receive comprehensive care.