Ah, the joys of a bath! Now, neither age nor disability muddies the waters 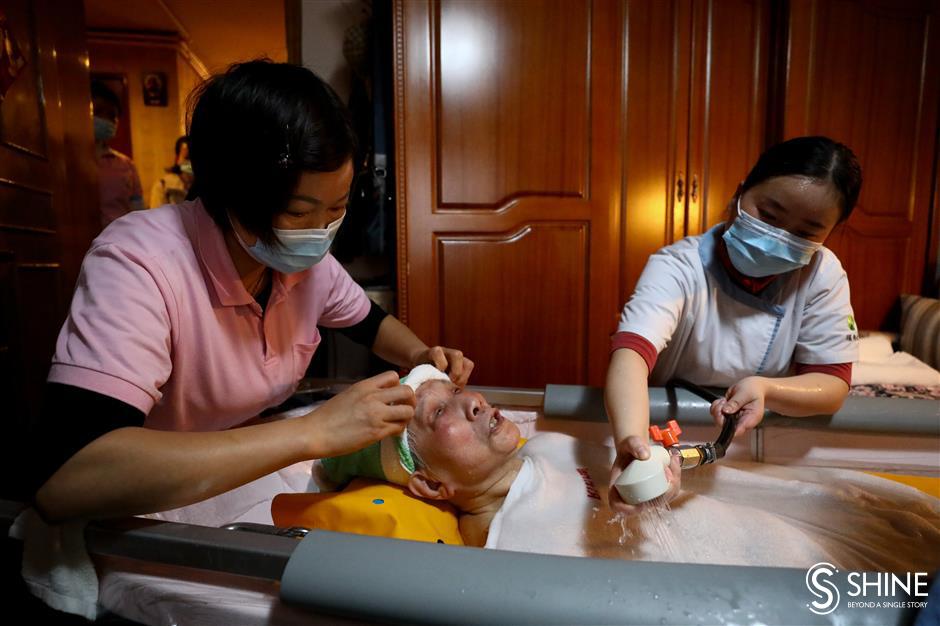 Wang Qing, 93, has been bedridden since February after a fall. She couldn’t take a bath until one day in July, three nursing caregivers carried a specially made bathtub to her home.

Modeled on a Japanese practice, the new in-home care service in Shanghai is winning applause from families with disabled seniors.

The bath given to Wang at her home in Changzheng Town in Putuo District involves an elaborate procedure and takes an hour and 40 minutes.

The bathtub is in two pieces. Once assembled, it is thoroughly disinfected. The tub has various elastic belts and clasps to protect the elderly, and a skidproof pattern is embedded in the bottom of the tub.

A water pipe is connected, a disposable cover is placed over the tub, and a water thermometer is placed inside. Towels used for different parts of the body are set out in advance.

"Every detail must be strictly observed to guarantee the safety of seniors," said Hua Binbin, a service provider. 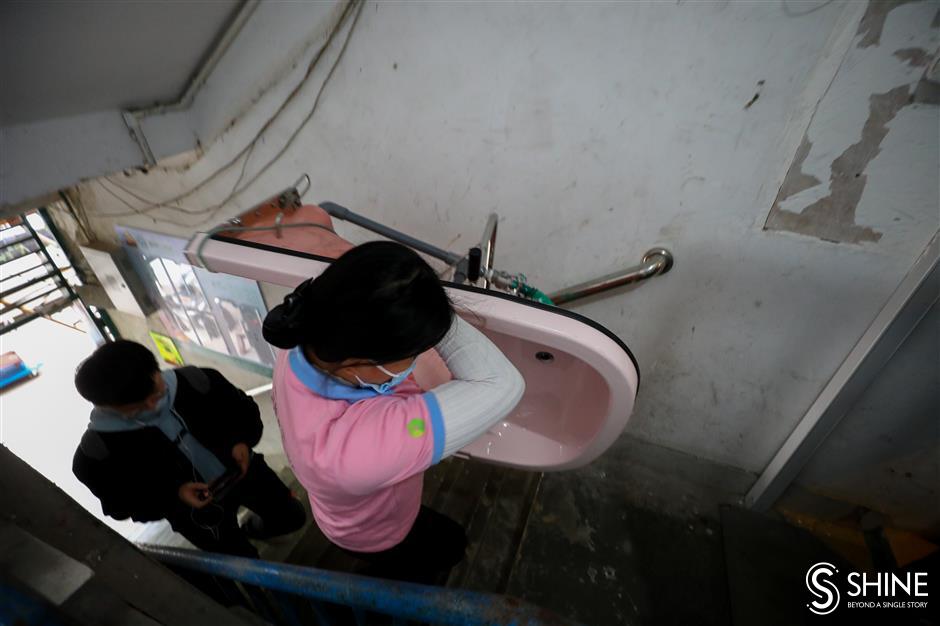 A service provider carries the bathtub to Wang's home.

Once the initial preparation is completed, which takes about 30 minutes, Wang was carefully moved from her bed to a stretcher that can move up and down. Then she is lowered into the water. Caregivers ladle water over her all the time to keep her warm, and keep up a cheerful patter to comfort her.

After the bath, her hair and body are carefully dried, and she is moved back to her bed.

"Controlling the water temperature is the most difficult part," said Hua. "It is kept at 38 or 39 degrees Celsius for the initial immersion and then kept at 40 degrees."

Wang was very happy with her bath.

"I feel refreshed and comfortable," she told Shanghai Daily, with a big smile, as she rested in bed after the bath. "I hope the next bath will be scheduled soon."

Wang lives with her son and daughter-in-law.

"In the past, she was fastidious about cleanliness and bathed frequently,” said daughter-in-law Meng Ting. “That all stopped in February after the fall. Now she is bedridden and can’t sit up for more than five or 10 minutes.”

Meng said she had been giving her mother-in-law “bed baths,” using washcloths, towels and a basin of water.

"I washed her every day, but it wasn’t the same as having a real bath,” said Meng. 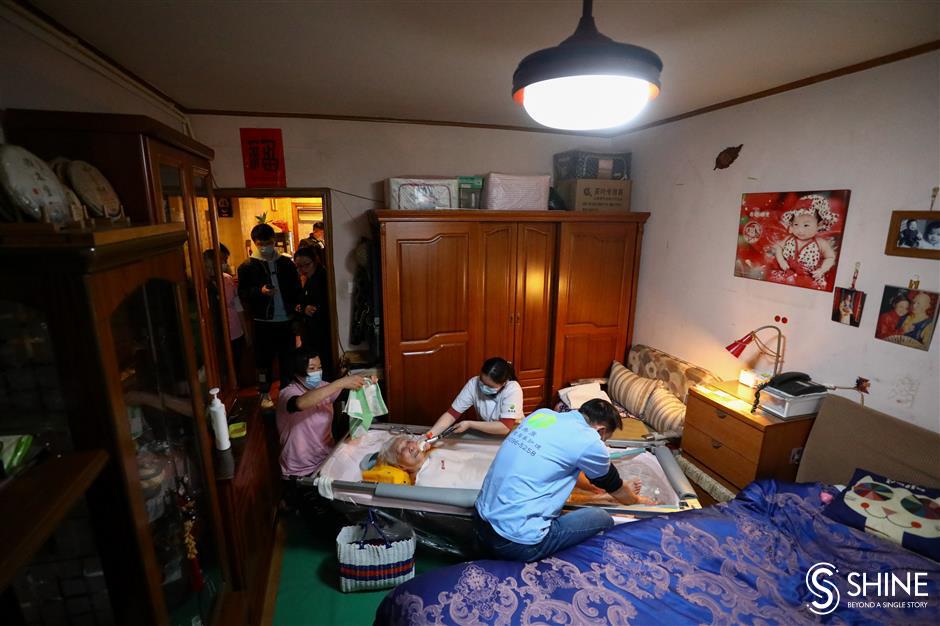 In Changzheng Town, senior residents account for a third of the population. More than 700 of them are 90 years and older, with 20 centenarians.

The in-home bathing program started earlier this year. A bath costs 450 yuan (US$69) a time. The town government purchases the service at a discount price from a provider. The family of an elderly recipient need pay only 10 percent of the cost.

"We visited many seniors' homes to learn what they needed and what their habits were,” said Gui Jiahuan, a town official in charge of the program. “We took a year to organize the program. What was clear to us is that seniors prefer remaining in their own homes. Some initially refuse the service because of privacy concerns, but they are hooked on it after just one bath. It takes time to accept a new concept in China.”

Meng said Wang did refuse the new service for a long time as well.

"She was shy,” explained Meng. “But after she became bedridden, she agreed to give it a try. She liked it from the start.”

Wang has since enjoyed the service several times. Because of big demand, the baths are usually available monthly or quarterly.

Families first must apply at their neighborhood committees, triggering an assessment of a senior’s health condition. Fu Shou Kang, the service provider, has bathed more than 300 seniors in a year, serving up to six a day. The service is fully booked.

"The average age of seniors we serve is 80 years old,” said Lin Xueqin, a manager of the provider, “and we also serve the disabled, even if they are young.”

The nursing caregivers are all 45 years or younger.

"We require that they have medical nursing certificates and drivers’ licenses, are good at communication, have a loving heart, are filial and have good physical health," Lin explained.

She added that the nursing staff has received instruction from Japanese specialists in the field, and some have gone to Japan for training.

The special bathtub, introduced from Japan, costs 60,000 yuan. Two are in service at present, Lin said.

"We have made some adjustments to the Japanese method," she added. "Our nurses must be very patient because they need to clean every part of a senior’s body. They also do some finger-tip massaging, which promotes blood circulation of the bedridden.”

Staff, she said, need good communication skills to understand how a senior is handling the bathing. 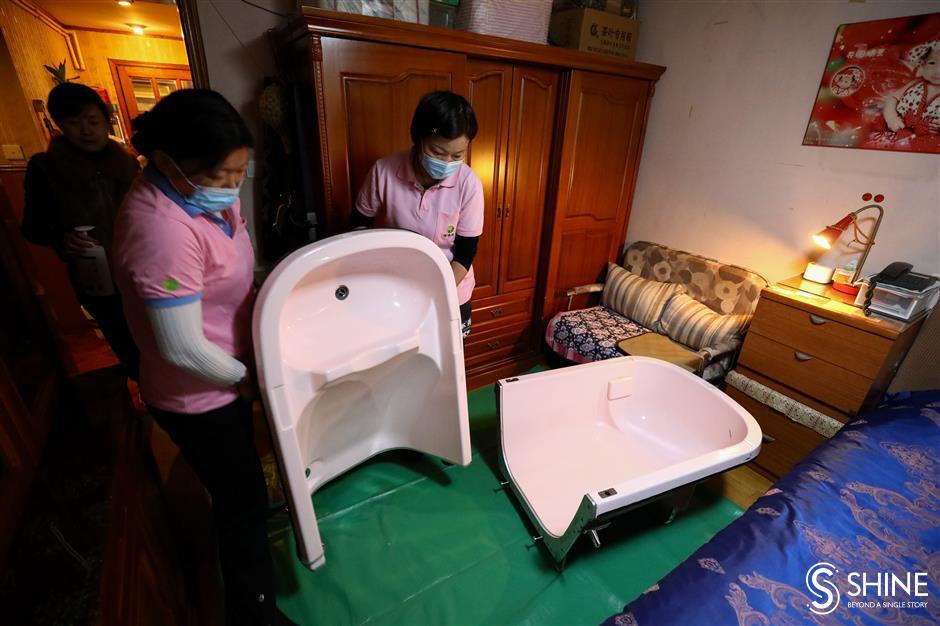 Nie Jiyan is one of the nursing caregivers.

"Families of seniors have never seen this kind of bathtub before and misunderstandings can arise,” she said. “We carefully explain it all. I treat the seniors like my own parents.”

The job is tough, obviously.

Some old residential complexes do not have parking space, meaning the caregivers have to lug the 10-kilogram bathtub some distance. If residential buildings don’t have elevators, that means carrying it up stairs.

Similar services have also been introduced in other districts.

Shan Qinzhen, 75, who lives in Songjiang District, has been paralyzed since a fall in her bathroom. She relies on her family to feed her and can no longer take a shower twice a day, as in the past.

Taking showers alone can be dangerous for seniors.

In July, the Songjiang District Civil Affairs Bureau earmarked 600,000 yuan to start a trial of in-home bath services. In one case, it served an elderly person who hadn’t been able to take a bath for more than 20 years.

"The service is considerate, and I am happy," said Shan. 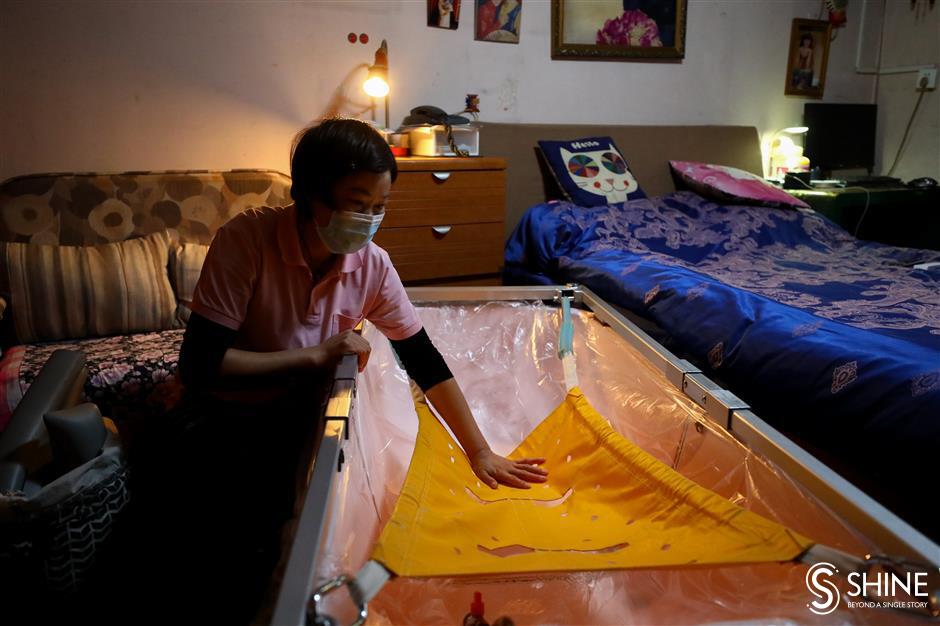 The Songjiang trial covers 1,200 elderly and disabled people for a year.

The first bath is free, and financial support is available based on need for subsequent baths.

Bu Yousheng, 27, is the youngest caregiver on the Songjiang team.

Two years ago, he moved alone to Shanghai, looking for work.

"At first, I didn’t dare to tell my family back home what I do in Shanghai,” he said. “I didn’t think they would understand, so I told them only that I worked in senior care service. But after a while, I realized just how important this job is.”

"One is a grandpa who can’t speak but has gradually accepted our service,” Bu said. “Some of our clients hug me after the bathing, and a few have since passed away.”

In 2019, Shanghai's population of people 60 years or older grew 2.9 percent from a year earlier to 5.2 million, accounting for more than 35 percent of permanent residents. 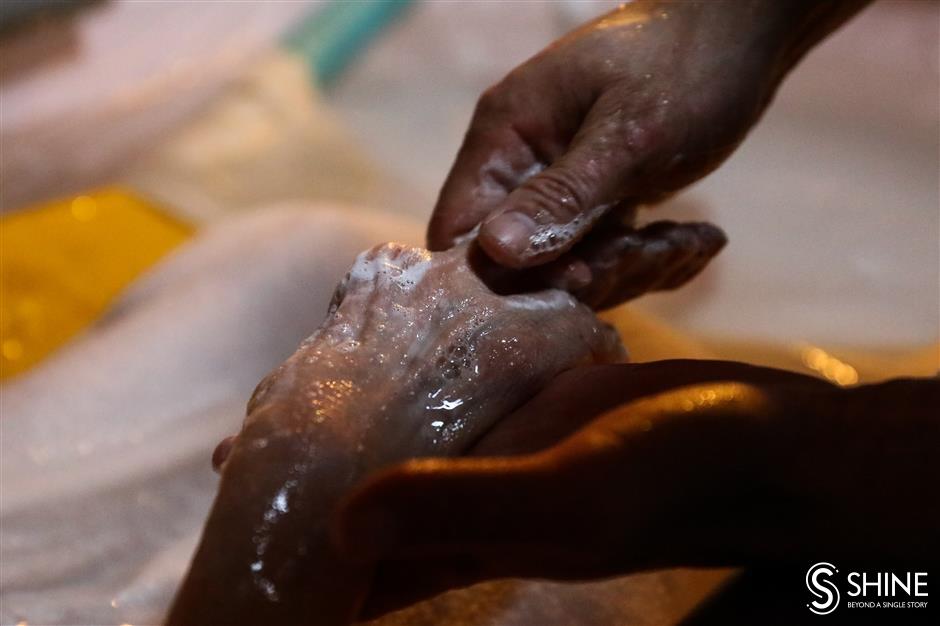 The city has been operating a long-term nursing care insurance program for its elderly residents since 2018.

The program targets citizens aged 60 or older who need long-term care, no matter where they reside, as long as they are covered by public medical insurance.

"The program includes in-home baths and is in great demand," Chen Yuebin, director of the Shanghai Civil Affairs Bureau's senior services department, told Shanghai Daily. "This new, emerging service diversifies what we can offer and meets the personal needs of many seniors.

He said efforts are underway to safety-proof the bathrooms of the elderly, particularly those living in old residential complexes.