Shanghai science park at the forefront of advanced technologies

PAN Jing, chairman and chief executive of TMiRob, likened the company’s disinfection robots to “automatic fire extinguishers” for their role during the coronavirus epidemic.

He still remembers a hospital in Wuhan, when three engineers and three of TMiRob’s robots disinfected 3,000 square meters in 72 hours, allowing surgery rooms and other medical facilities to operate in safety.

“No one knew how to disinfect wards with a multi-drug resistant bacteria environment,” Pan said in a phone interview with Shanghai Daily. “Robots freed other staff from the time-consuming work of disinfection, safeguarding doctors, nurses and patients in an efficient manner.”

For its achievements, TMiRob, a startup founded in the Zhangjiang Science City in Shanghai's Pudong New Area, gained brand awareness and media headlines. Its clients include 400 nationwide hospitals as well as public sites as hotels and airports.

TMiRob’s first year of profitability enables the company to list on the Shanghai STAR Market, a new capital board for innovative technology companies. 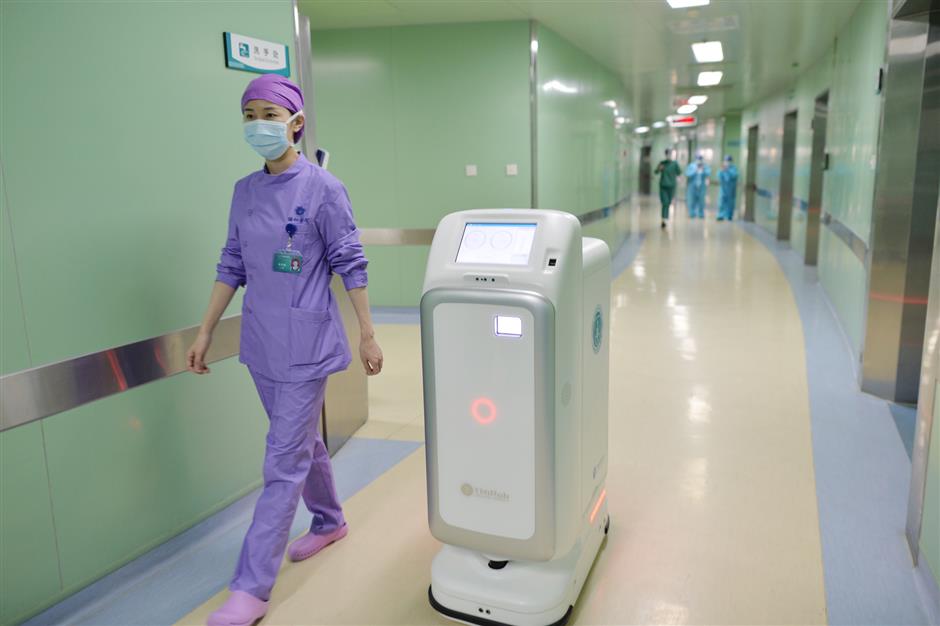 Disinfection robot works in a hospital.

Pan is just one of the entrepreneurs in Zhangjiang who is helping put the science park on the map.

The park is home not only to disinfection robots, but also to smart device chips, automated industrial systems, digital services, biomedicine and laser research projects.

In a ceremony in December, Zhangjiang signed contracts for 93 projects with a combined investment of 87 billion yuan (US$13.8 billion). They cover digital technology, integrated circuitry, biomedicine and artificial intelligence.

By 2025, Zhangjiang is expected to host about 20 open innovation platforms and at least 15 startup companies valued at US$1 billion or more. About 50 industrial giants, including Alibaba and Microsoft, are setting up facilities in Zhangjiang, according to the park.

The site will focus on cutting-edge sectors such as gene and cell therapy, and research on therapeutic antibodies.

The sketch of the pharmaceutical project

Online radio platform Ximalaya, also based in Zhangjiang, is creating jobs and a new lifestyle in the digital space.

By the end of 2020, the company was offering users 393 categories of podcasting content, including audiobooks, history lectures, law consultation, music, film, travel and sports. About 31 percent of people are growing accustomed to listening to online radio programs every day, especially when in cars or on public transport.

Ma Yinqing, a 26-year-old Shanghai woman who is visually impaired, started her audiobook business for children on Ximalaya. She now earns around a million yuan a year and employs 20 workers.

“The online platform gives me a career choice beyond the usual message work that blind people are often relegated to do,” Ma said. 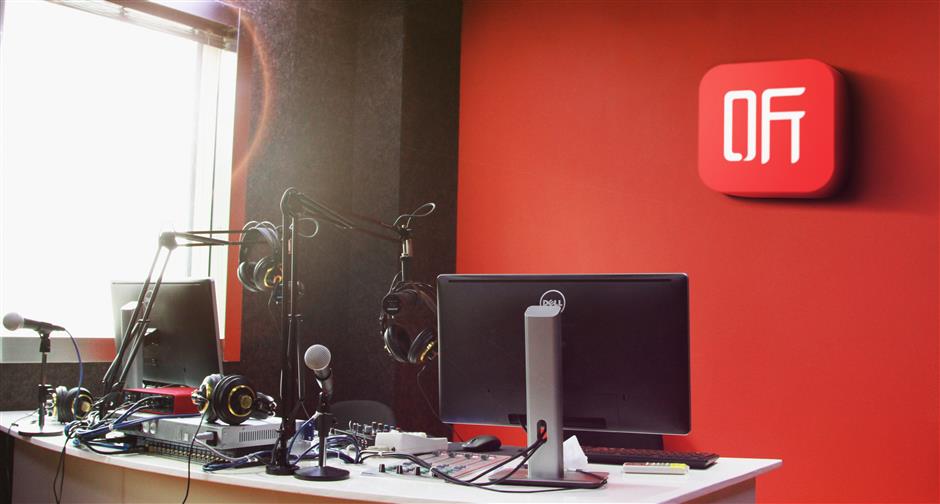 A studio for podcasting in Ximalaya

During the pandemic, increased online activities in shopping and entertainment have fueled the growth of digital technology and online platforms.

Zhangjiang has become a popular site because of its welcoming business environment, its ecosystem and its rich talent pool.

The multinational giant Honeywell has located its Asia headquarters in Zhangjiang. The company, whose businesses span aerospace, building technologies, performance materials and technologies, as well as safety and productivity solutions, said it plans to further integrate with China’s booming digital economy. The company invested US$100 million in Zhangjiang in 2016 to expand the Asia-Pacific headquarters.

“Driven by the digital revolution across China in recent years … Honeywell is quickly advancing towards a new era of digitization where ‘software and hardware are fully integrated,’” Scott Zhang, president of Honeywell China, said in a statement to Shanghai Daily. 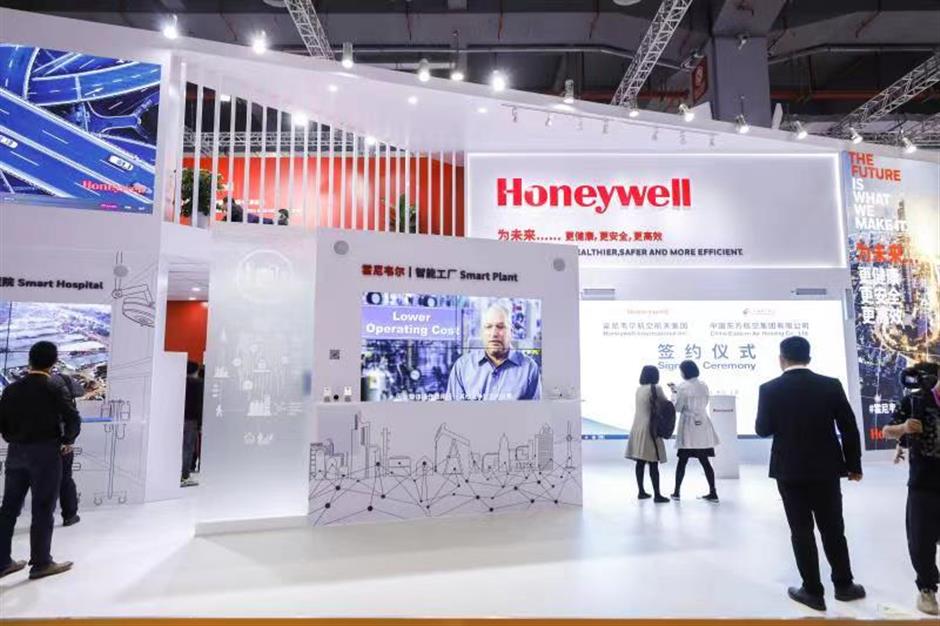 Honeywell booth in the CIIE event displaying 30 latest products and innovations. The company has its Asia headquarters in Zhangjiang.

The Pudong New Area has assisted 16 companies with initial public offerings on the STAR Market.

One of those in line is TMiRob. It’s a dream come true for Pan, who worked in a multinational company for more than a decade in Zhangjiang before founding TMiRob in 2015.

The company now has 200 employees, 70 percent of them focusing on research and development.

Pan praises the “cross-fertilization” of ideas in the park, citing collaboration with Microsoft’s artificial intelligence algorithm and Huawei’s telecommunications module.

Now the company is preparing documents for its initial public offering on STAR.

By tapping the financial market and with a 10-fold increase in sales growth last year, TMiRob plans to expand its product portfolios and expand its footprint nationwide.

The company will focus on robots to “better serve patients, doctors and nurses, build “smart” hospitals, and improve the efficiency of public medical resources in China,” Pan told Shanghai Daily. 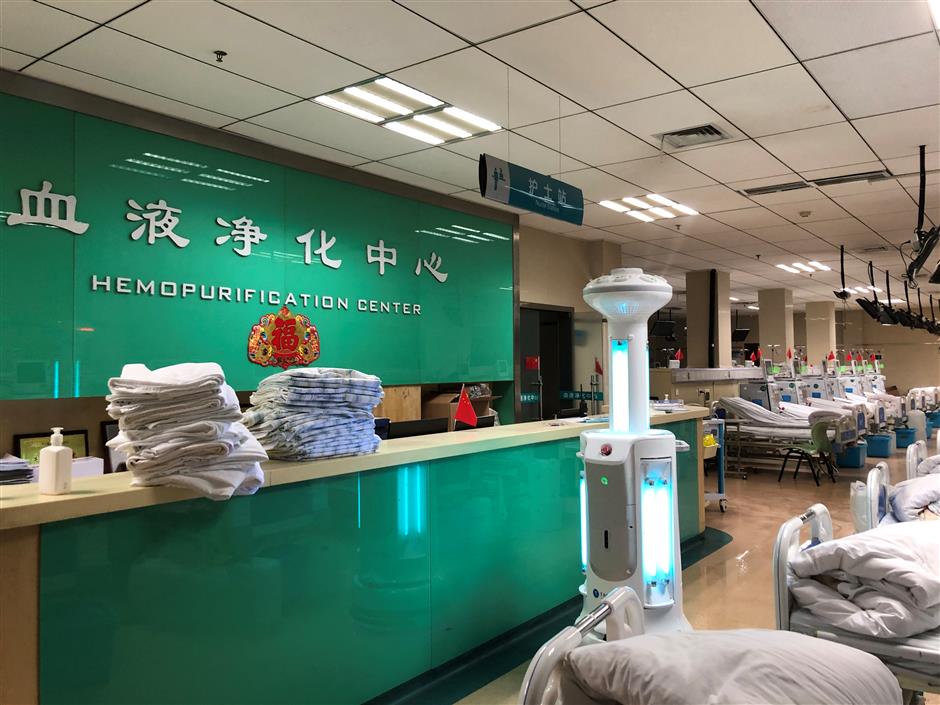 Microsoft has set up a laboratory in AIsland, a newer innovation zone in Zhangjiang. By the end of 2020, more than 8,000 artificial intelligence engineers were working there for companies like IBM, Microsoft, Alibaba’s chip unit, ADA Health, CloudWalk and Tongji University. 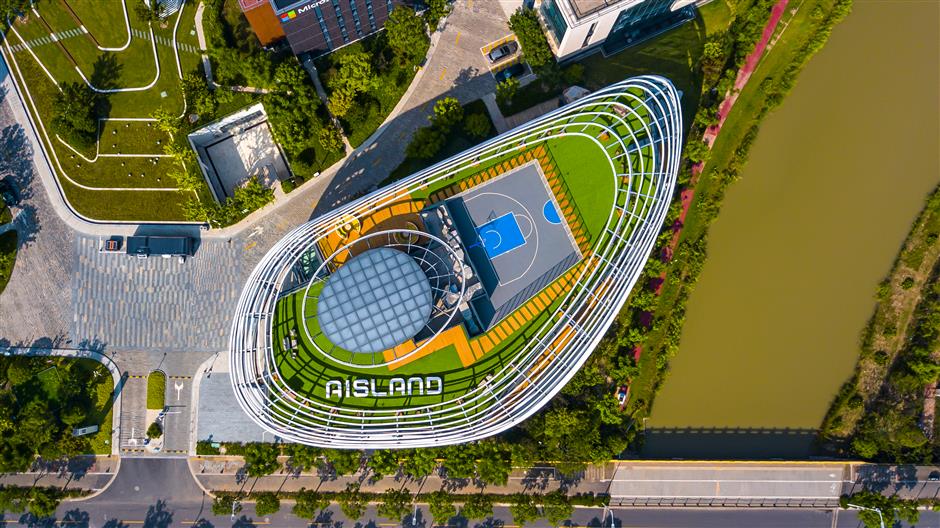 A bird's-eye view of AIsland 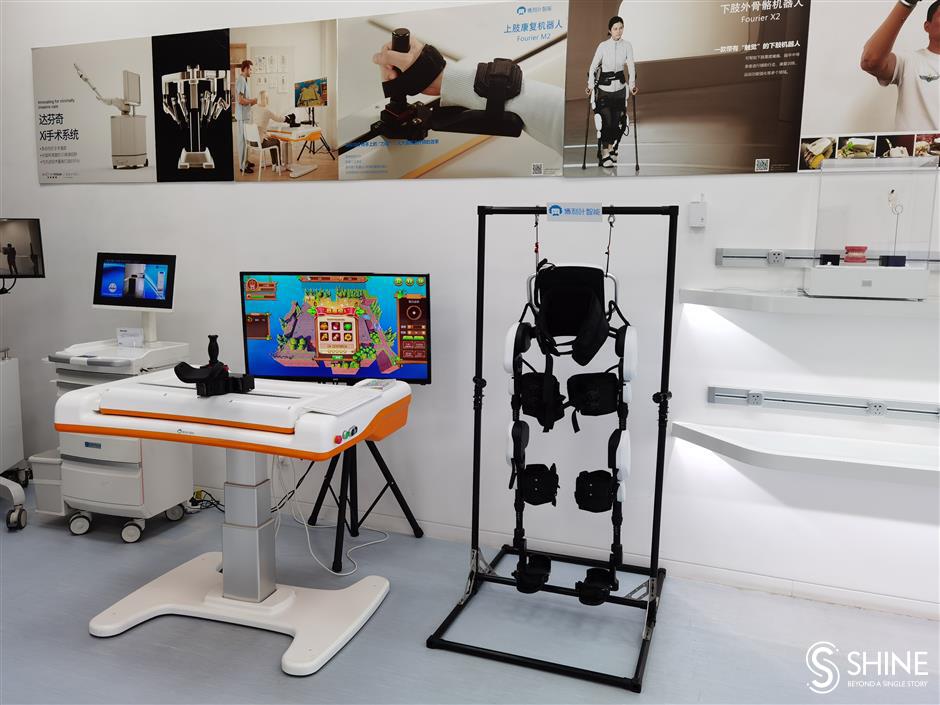 AI medicial applications are shown in a demo center in the AIsland of Zhangjiang.

The 21 buildings that comprise AIsland give a glimpse of more than 30 “smart” technologies of the future, including unmanned food stores, intelligent garbage classification, unmanned surveillance vessels and cleaning robots. 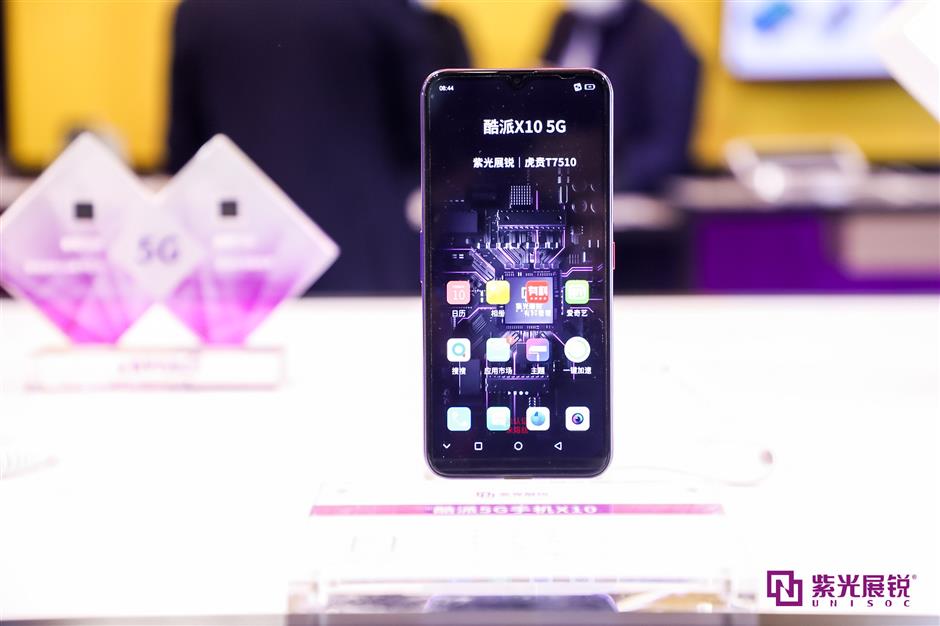 A smartphone with Unisoc chip 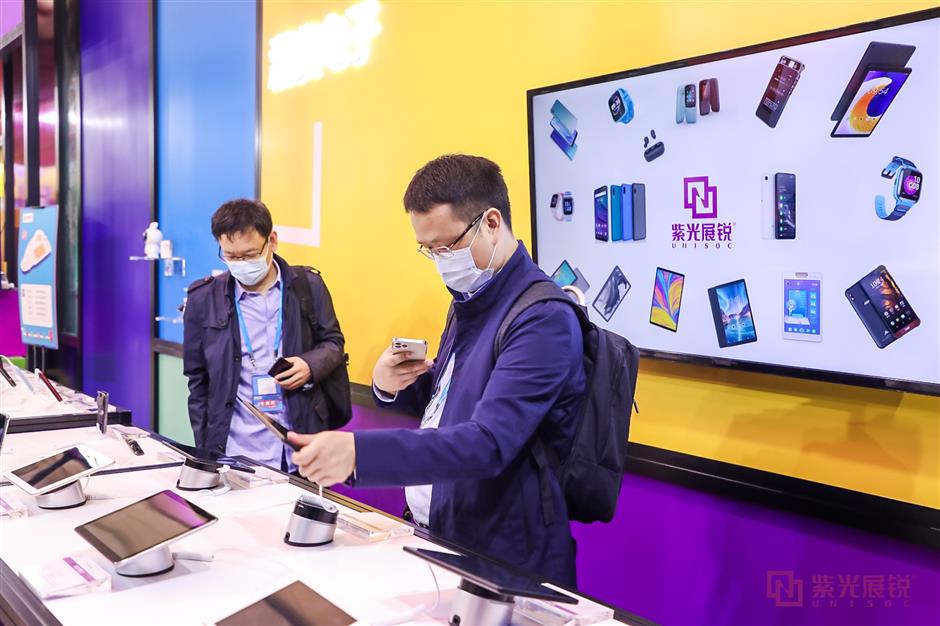 In 2020, Unisoc strengthened its research structure to become one of “world-class” telecommunications and semiconductor firms, Unisoc Chief Executive Chu Qing said in a New Year speech.

In May, the company finished a 5-billion-yuan round of financing. It is now applying to list on the STAR Market.

Unisoc is a part of an integrated-circuit industry chain in Zhangjiang, the most complete chain of its kind nationwide. Integrated circuitry firms, from materials and equipment to design, manufacture and testing, have set up facilities in Zhangjiang.

The biggest mainland chipmaker, Semiconductor Manufacturing International Corp, or SMIC, has its headquarters in Zhangjiang. It’s the most capitalized company on the STAR Market.