A River of History and Culture
Shot by Zoe Yan. Edited by Zhou Shengjie. Subtitles by Yang Yang.

Suzhou Creek holds a special place in the hearts of Shanghai residents. The region's silks and ceramics were carried along the Maritime Silk Road in the Tang Dynasty (AD 618-907), and centuries later the area became an early industrial hub of the city. By the 1980s, the creek had degenerated into a fetid waterway, flanked by shantytowns. But that was the past. The future is now fully on display with the completion of years of intensive cleanup projects and redevelopment of the waterfront. This series explores the creek in each of the six city districts through which it flows. 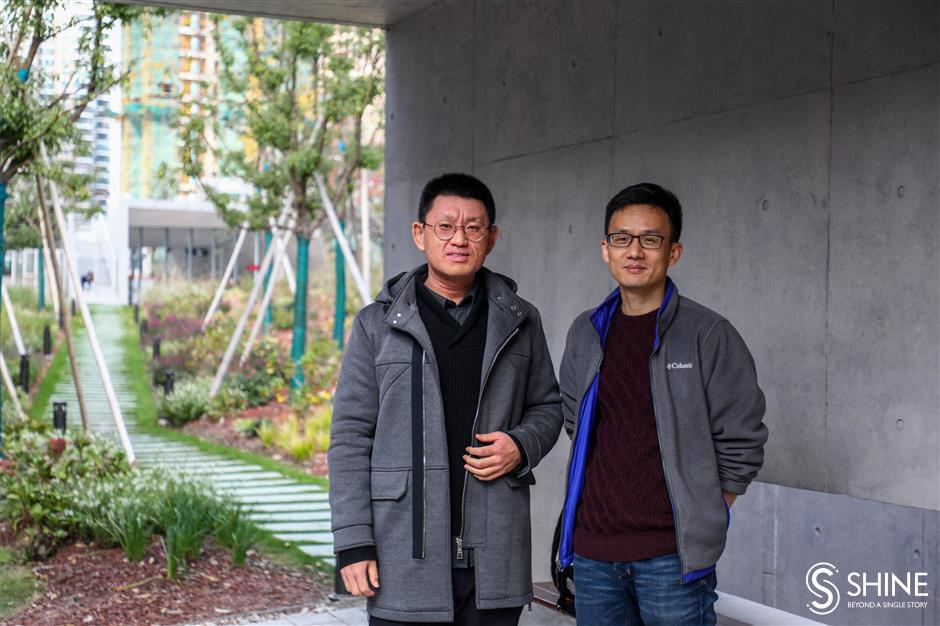 Such pastime recreation has been preserved in historical sites along a 3-kilometer stretch of the creek between Chengdu Road and Waibaidu bridges, just before it flows into the Huangpu River.

The waterfront there features old relics of the Shanghai Rowing Club dating back to 1904, and Jiuzi Park, where the city’s unique lane games were played.

It’s all part of a decades-long project to redevelop the 21-kilometer downtown portions of the 125-kilometer creek, the Huangpu’s largest tributary. The project, according to plan, is nearing completion.

The creek passes through six Shanghai districts. Architect Wang Xunan and his wife Zhang Linqi took part in the design of the waterfront in the Huangpu District, which comprises the lower reaches of the creek.

Wang, 33, is a native of the northeastern Chinese province of Heilongjiang Province. During doctoral studies at Tongji University, he was mentored by tutor Zhang Ming, a celebrated local architect. That association led to a deeper understanding on Shanghai’s history and culture, aspects that were incorporated into the waterfront plan.

Before the redevelopment, the creekside region was nothing more than a small backstreet with 5.2-meter-tall floodwalls and a sorry environment.

Under Wang’s design, the waterfront is broken into three sections -- the “gate,” the “eyes” and the “posthouse.” Each has different highlights and attractions.

“The riverside region has been developed into a ‘backyard garden’ for the nearby residents,” Wang explained. 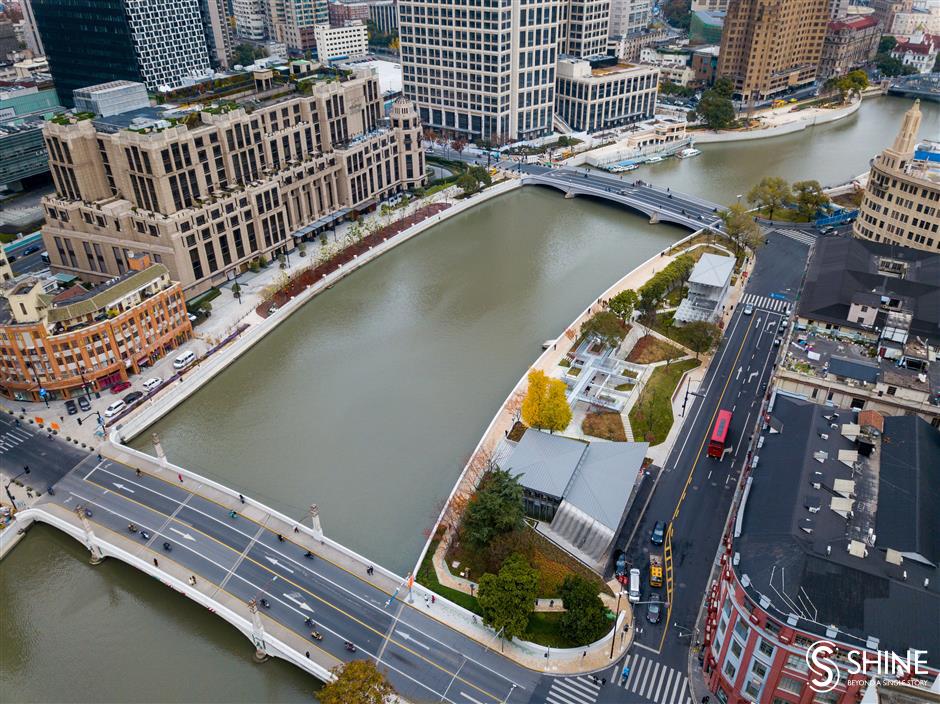 The east and west sections of the Huangpu segment of redevelopment have opened to the public; the middle part between Wuzhen Road and Henan Road bridges will be fully completed by June.

A riverside walkway through the whole area has opened.

The flood-control walls are required to protect the shoreline during the city’s annual plum rainy season in early summer.

To ensure public safety while expanding the view of the creek, Wang and associates created a double-layer floodwall near Chengdu Road Bridge. Visitors can walk out onto a low water platform in good weather. During heavy rain, the iron gates on the higher secondary wall are closed.

“The lower platform is designed to be inundated during the flood season,” Wang said.

In the middle section of the waterfront project, part of the floodwall is being removed, and transparent glass walls have been installed along the creek in some areas.

The height of the floodwall has been reduced by an average 70 centimeters, and the creekside walkway has been elevated to offer a better view, Wang explained.

“Visitors can get close to the waterway for about 80 percent of the shoreline in Huangpu District,” said Zhang Zhili, an official with the district’s sanitation and engineering management authority who is in charge of the redevelopment.

Zhang, 38, has headed up many major road and bridge projects in Huangpu. He described the project along Suzhou Creek as the most interesting.

Shanghai’s traditional blue-and-yellow mosaic pathway design has been adopted at the creekside. Blue bricks indicate where people can get close to the creek, while yellow bricks mark sports areas, Zhang said. 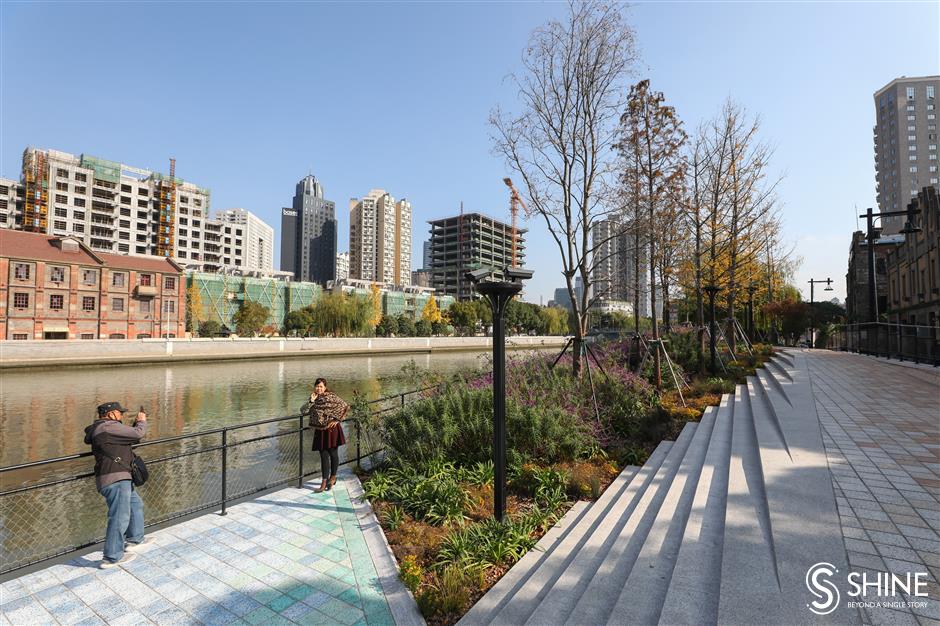 Visitors pose along the Suzhou Creek in a newly opened garden in Huangpu.

Walls in nearby Jiuzi Park have been removed to connect the park with waterfront gardens.

Jiuzi literally means the “nine games” that were traditionally played in old lanes. Even today, residents still play them. The Jiuzi Games competition is held in the park every year. The 300 competitors include some expats.

“We used to play the games for fun,” said Gu Jinbo, 65. “But with the newly opened waterfront, we are also showcasing Shanghai traditional culture.”

Gu has been living in the nearby Tonganfang neighborhood for over half a century. He can remember the clean creek waters of his boyhood and the murky cesspool that dominated in the 1980s.

“The creek and the riverside region have never been as beautiful as nowadays,” Gu said.

Even with redevelopment, many businesses are still operating on its shores, among them China’s first state-owned gas station and a garbage treatment facility.

The No.1 Sinopec Gas Station at the intersection of Nansuzhou and Sichuan roads was built in 1948 and named after the liberation of Shanghai in May 1949.

To dress up the site, a café has opened on the station’s open-air terrace, affording patrons a lovely riverside view.

Beside the gas station, two concrete bridge piers of the former Wusong Road Bridge, which was demolished in 2009, have been preserved and converted into a sightseeing platform. Visitors can pose there for photos, with views of the Oriental Pearl TV Tower and Lujiazui skyscrapers in the background. 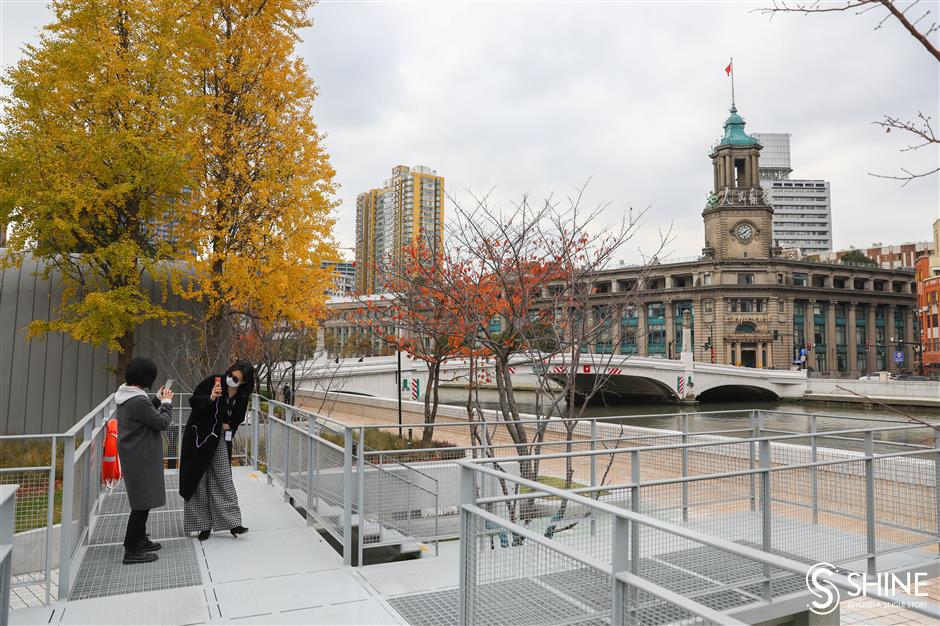 Visitors pose on a sightseeing platform developed on the remaining piers of a former gate bridge on Suzhou Creek.

The gate bridge was built in 1991 as the major cross-river channel and floodgate on the creek. It was torn down to make way for new bridges and flood-control structures.

“The piers are in the common memory of Shanghai people,” Wang said. “Local parents tell the story of the old six-lane bridge to their children.”

As a key project in the eastern section, the history of the Shanghai Rowing Club is highlighted. The club was established in about 1859 for British settlers who came to the city after Shanghai opened its port to the world in 1843.

Although the original boathouse was demolished in 1989, the main building and an archway of the west wing have been preserved. The remaining building was built in 1905 in a style reflecting both Victorian and Edwardian styles.

In 2009, Tongji professor Chang Qing and Ruan Yisan, an authority on historical structures, persuaded the local government to drop plans to demolish what remained the city’s oldest sports facility.

The rowing club, along with the nearby former British Consulate and Union Church, has become a historical marker of early British settlement, according to Chang.

He also noted that the Huangpu Swimming Pool, a national training center built after 1953, was the cradle of China’s first group of competitive swimmers, who later coached many Olympic champions.

During the Suzhou Creek project, architects restored the original structures of the club houses, with steel shelving for climbing plants. The remains of the former swimming pool have been converted into another riverside café, Wang said. 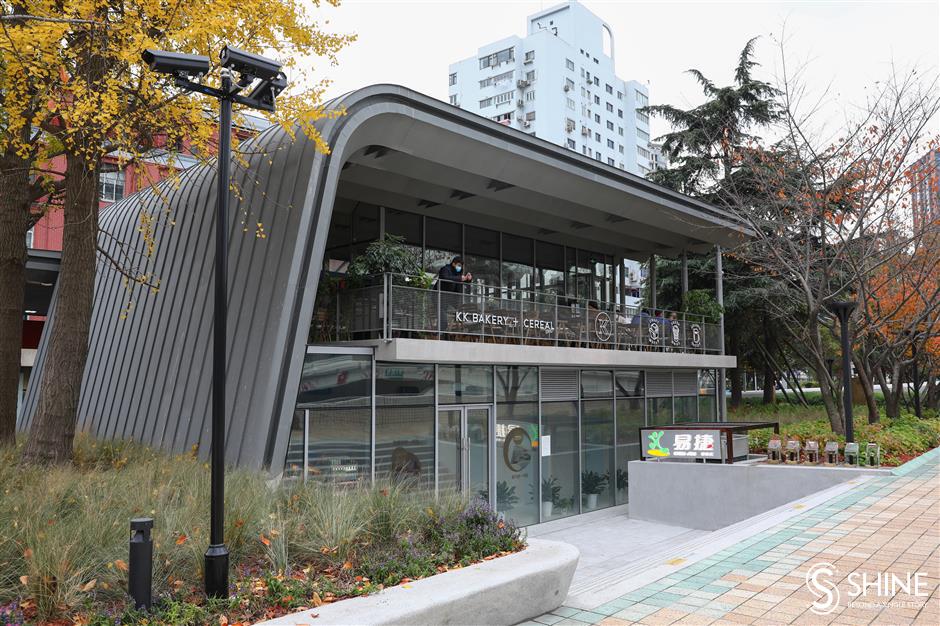 A riverside gas station and cafe on the upper floor 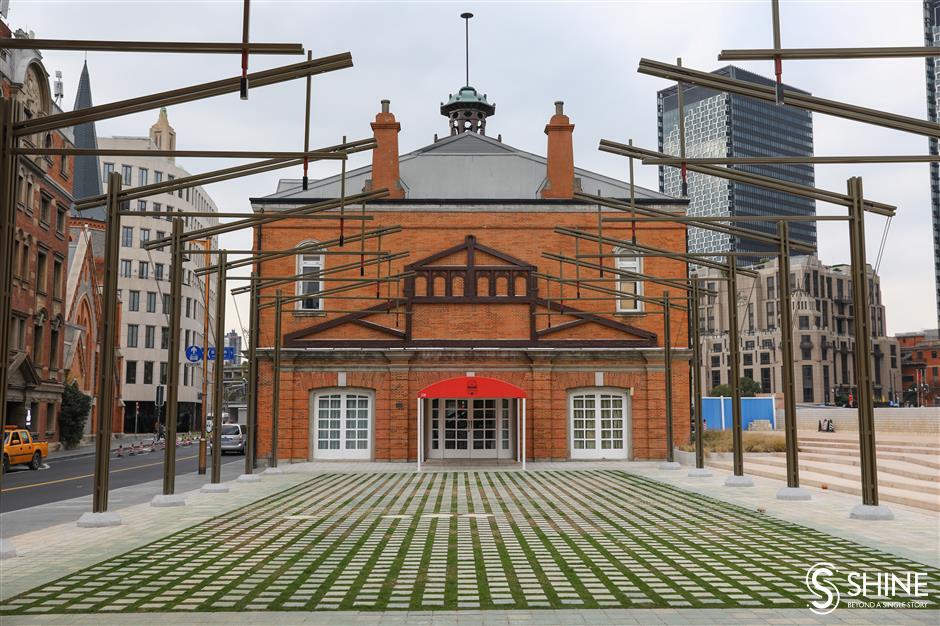 An installation on the former site of the Shanghai Rowing Club