Suzhou Creek holds a special place in the hearts of Shanghai residents. The region's silks and ceramics were carried along the Maritime Silk Road in the Tang Dynasty (AD 618-907), and centuries later the area became an early industrial hub of the city. By the 1980s, the creek had degenerated into a fetid waterway, flanked by shantytowns. But that was the past. The future is now fully on display with the completion of years of intensive cleanup projects and redevelopment of the waterfront. This series explores the creek in each of the six city districts through which it flows. 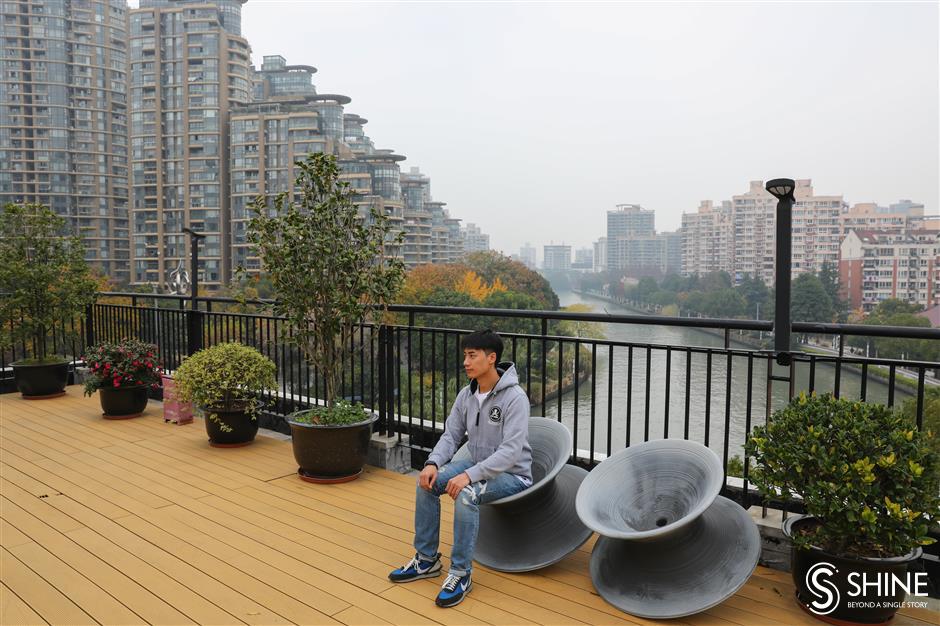 Hui Si, operations and marketing director of X Tower, watches the Suzhou Creek on the top of a preserved building in the innovation park.

As Suzhou Creek passes through Putuo District, it flows through the history of Shanghai’s growth into an industrial city. Waterfront redevelopment preserves that heritage.

Beginning in the first decade of the 20th century, Chinese entrepreneurs built national industries, including textiles, flour, beer, minting, printing and clothing, along the most zigzag section of the creek, known as the “18 bays.”

Many of the former factory clusters have been preserved by converting them into modern uses, including the now popular M50 art hub that opened in 2000 and the two-year-old X Tower specialty park.

Walls and fences in parks and residential neighborhoods have been removed to allow convenient public access to the entire 125 kilometers of the waterfront, providing a continuous walkway from Qingpu District to the confluence with the Huangpu River downtown.

Putuo hosts the longest creek frontage in downtown, stretching 21 kilometers, with the 18 bays.

The district government launched a redevelopment of the waterfront in October 2018, said Zhang Nan, deputy director of the Community Management Department of the Changshou Road Subdistrict.

Weedy, deserted backyards and illegal structures were the first targets of the project. The structures were demolished and the empty spaces filled with creative uses like pocket parks and hubs for cultural industries.

The renovation replaced a muddy waterfront path with plastic cement, Zhang said. The riverside pathway connects to X Tower Park on Yejiazhai Road. Eateries and other shops in the area have proven popular with the public. 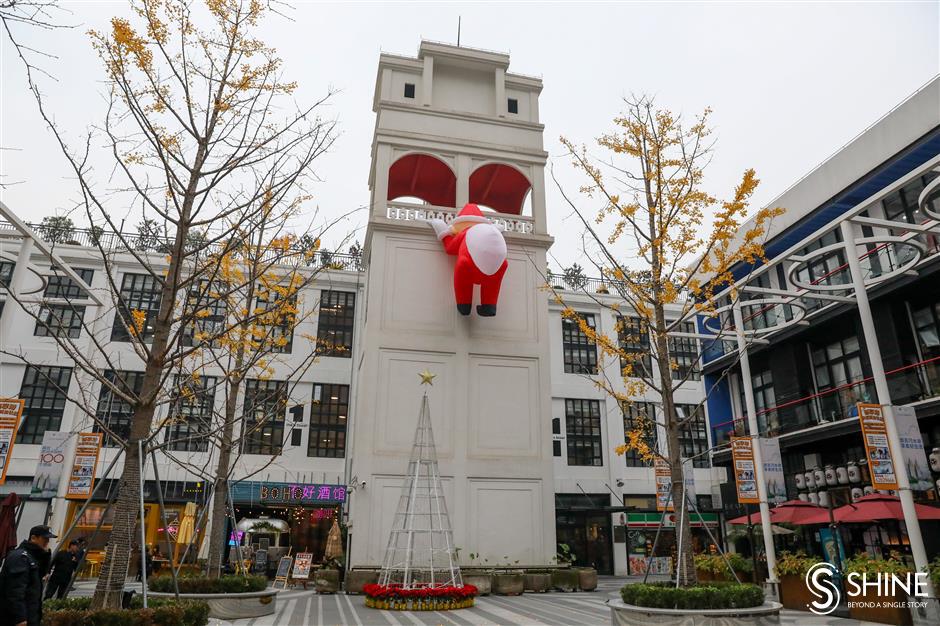 A former watchtower at the site is preserved into a sightseeing platform, giving visitors a panoramic view of scenery along the creek.

Hui Si, operations and marketing director of X Tower, now walks to work along a 20-minute jaunt between home and park instead of driving along Changshou Road.

“The opening up of the waterfront has benefited me, both as a resident and as a park operator,” Hui said.

The waterfront section known as Baocheng Bay was home to a fifth of China's earliest textile factories, dating back to the 1920s. After 1949, the Shanghai Nos. 1, 6 and 7 cotton factories were located on the waterfront, along with a military warehouse for quilts and uniforms. The site was dubbed the "cradle of China's textile industry."

The X Tower Park was developed from a century-old military warehouse, with most of its main structures preserved.

Hui, 31, who graduated in management at Indiana University in the US, said he was intrigued by the history and stories behind the site, as well as its Bauhaus-style architecture. He quit a job as a successful consultant to take charge of the X Tower park’s redevelopment in 2017.

The park, redesigned by Italian designer Per Erik Bjornsen, is now home to about 100 cultural industry startups. The original cargo elevators have been preserved. A former watchtower at the site give visitors a panoramic view of scenery along the creek.

“The Suzhou Creek waterfront of Shanghai is on par with the world’s top-class riverside cities,” Hui said. 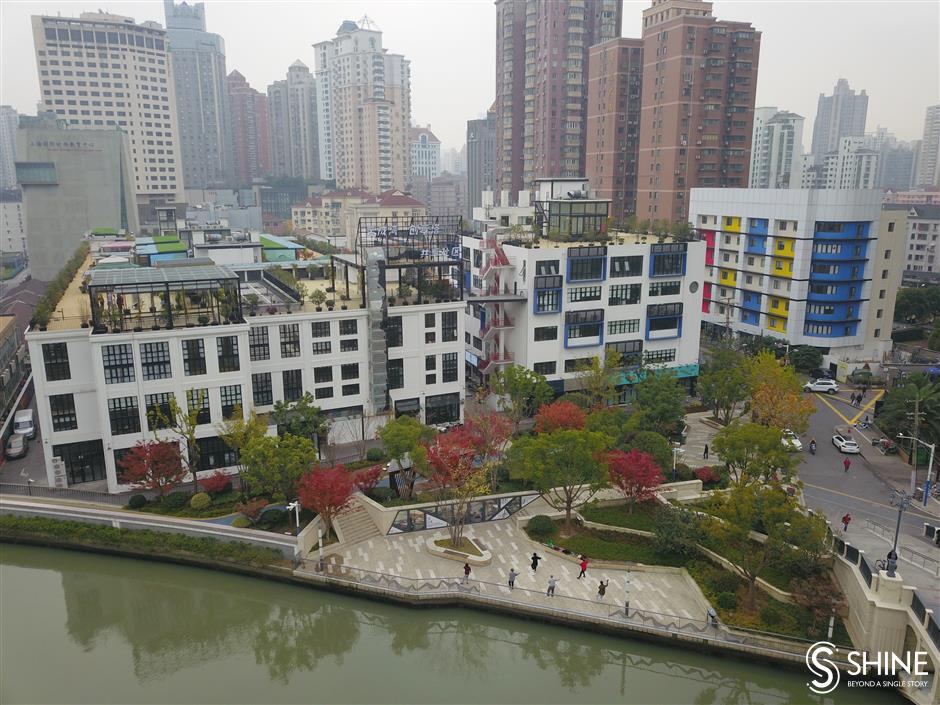 The X Tower innovation park along the creek

Several other industrial structures have also been preserved, including a warehouse and pump house at 652 Changshou Road, which was built in 1922 by the Japanese Home & Foreign Cotton Trading Co and later taken over by Shanghai Textile Holding Co.

An official at the Jingyuan park, which rose from the remains of the Shanghai Textile Raw Materials Co., said the park has thrived, despite the coronavirus pandemic, since the new-look waterfront opened.

The upstream M50 Art Park has also become popular, especially among nearby residents. Since it was created at the turn of the millennium, over 150 galleries and art institutes have chosen to make it their homes there.

“The park used to attract professional artists and tourists only, but with the opening of the riverside path, art galleries and cafés, more and cafes, more people have come,” said Huang Wei, an official with the park.

The park has changed its focus from contemporary art to the more general theme of “life and art,” targeting a wider audience. Street art decorates walls, corridors, street corners and parking spaces, some of it harking to the history of the area. 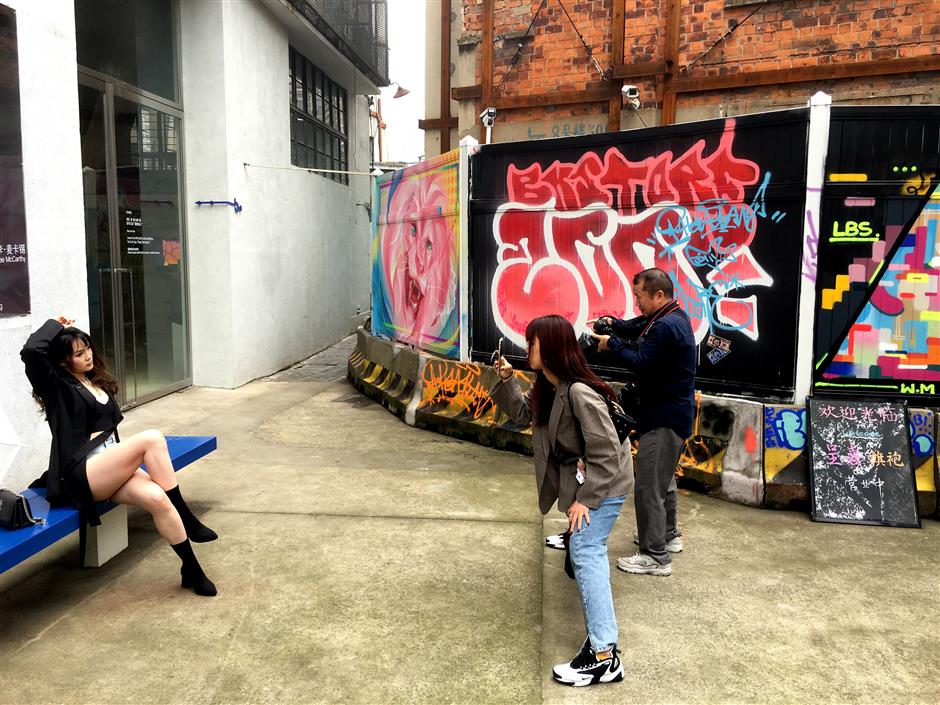 Visitors pose in the M50 art hub along the creek.

On Moganshan Road, M50 was one of the first and most notable cases of industrial heritage given new life as a cultural attraction. M50 straddles 24,000 square meters along the creek, with 50 buildings that were once home to the enterprises like the New China Textile Co. It is one of the best-preserved downtown industrial sites.

Huang said her father grew up along the creek, where he used to swim. He was distressed by the worsening water quality over the years, she said, but he now expresses great pleasure in its purification.

The riverside region, once an enclosed parking lot and garden, has been converted into a pathway, a sightseeing platform and small plaza. Graffiti paintings decorate the old flood wall. 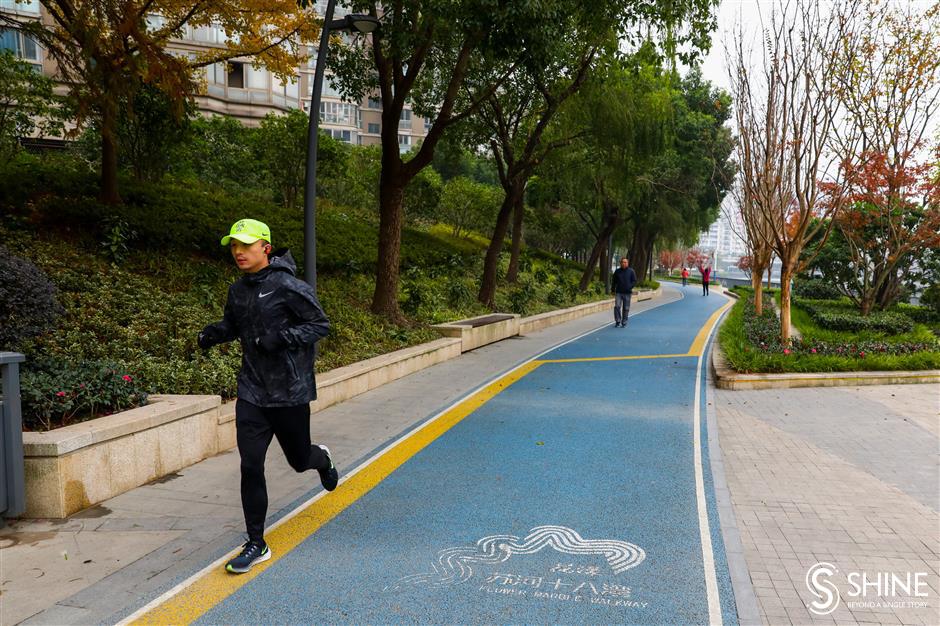 Citizens jog along the newly opened riverside path along the creek.

Early this year, a commercial project called “one thousand trees” will open to the public. It has been dubbed Shanghai’s “Hanging Gardens of Babylon.” The project features restaurants, museums, art galleries and entertainment sites.

More public leisure space will be developed in the park, Huang said.

A structure there, designed by British architect for the UK Pavilion at the Shanghai World Expo in 2010, sits on the site of China’s earliest private flour factory, which opened in 1900. 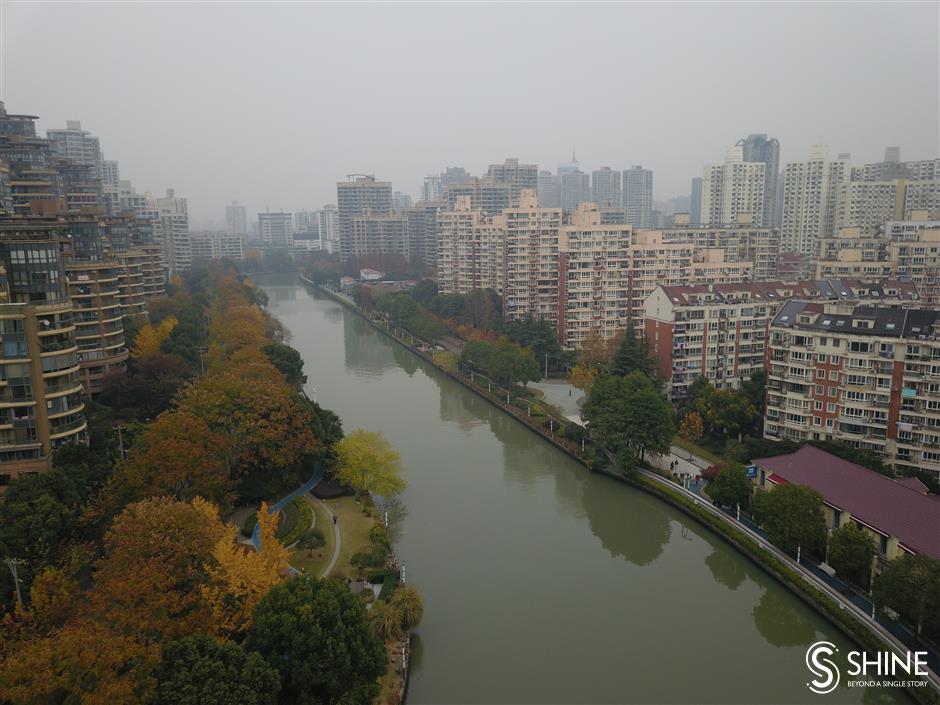 Residential communities along the Suzhou Creek in Putuo.

The Fufeng Flour Factory, which became the Shanghai Flour Factory in the 1960s, was owned by brothers Rong Zongjing and Rong Desheng — tycoons known as China’s “kings of flour and textiles.”

Rong Desheng’s son Rong Yiren was vice president of China from 1993-98. Dubbed “the red capitalist,” he helped set up China International Trust and Investment Corp, or CITIC, in 1978.

Four buildings belonging to the former flour plant have been preserved and will open along the riverside path. One building is being converted into a museum highlighting the history of the factory, while the others will house an art gallery and restaurants. 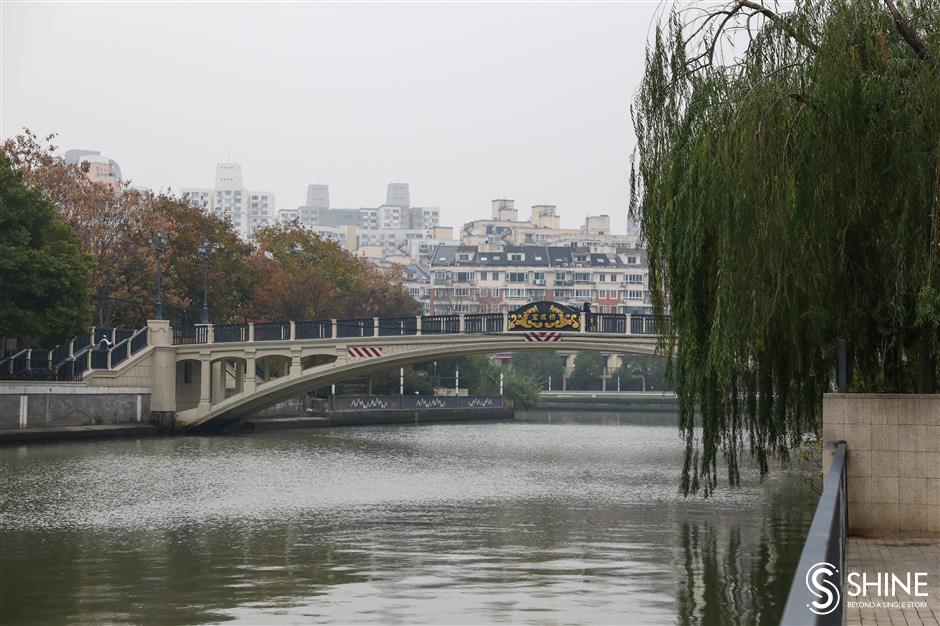 The Baocheng Bridge spanning over the Changshou Bay of the creek.