For the Year of the Ox, travel might not be the best option

Last year, the outbreak of the coronavirus epidemic upended annual Chinese Lunar New Year celebrations. Although China was successful in bringing the pandemic under control, recent outbreaks of new locally transmitted cases in parts of the country have raised alarm bells for public safety ahead of the start of the Year of the Ox on February 12. This series explores how Spring Festival is shaping up in Shanghai. 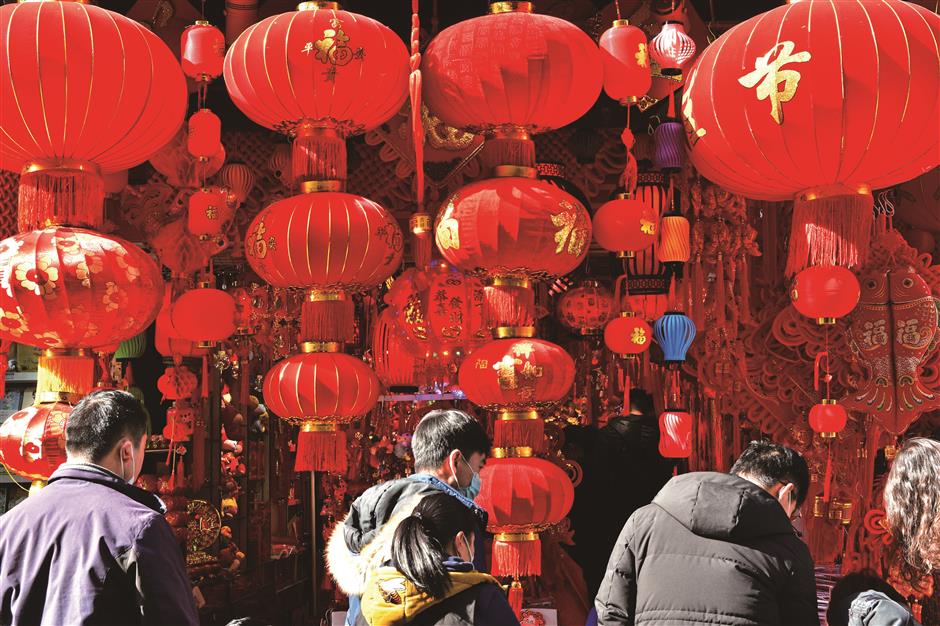 People select Chinese lanterns, red couplets and other festive decorations in the small commodity market of Yuyuan Garden in Shanghai for the upcoming Year of the Ox.

Shanghai residents often joke that the metropolis becomes a “ghost city” during Spring Festival, the weeklong holiday when waves of migrants travel back to hometowns and natives go on trips.

Indeed, the nation’s premier holiday invariably grabs global headlines as the biggest mass movement of people in the world.

The urban hustle-bustle typically begins to abate a week ahead of the Chinese Lunar New Year, which falls on February 12 this year. Courier services slow as deliverymen leave town. Traffic jams ease. Domestic helpers are harder to find, even if you are willing to pay a premium. Even the familiar neighborhood fruit and breakfast vendors shut up shop.

But is that the picture of things this year?

The central government hopes not. After coronavirus wreaked havoc with Spring Festival last year and new spikes in locally transmitted cases have popped up this year, China has tightened its holiday travel policy.

Travelers planning to return to their hometowns over the holiday are required to have a negative COVID-19 nucleic acid test within seven days before their departure, the National Health Commission said yesterday.

Earlier, a taskforce of the State Council, China’s Cabinet, issued a series of recommendations to try to ensure public health and safety.

Liu Kezhi, director of the Market Management Department at the Ministry of Culture and Tourism, said non-essential travel should be avoided, especially to overseas destinations and to riskier areas within China.

Some people plan to leave Shanghai earlier than usual, concerned that an unforeseen lockdown might spoil their plans.

Masseuse Yanzi is one of them. The 21-year-old Anhui Province native, who stayed in Shanghai last Spring Festival due to the outbreak, quit the job and already left the city.

“I bought the train ticket days after the Hebei outbreak,” she said, “because I was worried it might be harder to travel or my hometown would require a quarantine.”

Others have decided to stay put this year and try to make up for some of the income they lost because of the coronavirus pandemic in 2020.

“We usually give bonuses to those who remain at work during Spring Festival,” Lin Weijian, manager of a packaging factory in Pudong’s Huinan Town, told Shanghai Daily. “Some workers didn’t return last year because of COVID-19 travel restrictions. This year, we tripled the cash bonus and will provide free meals for those staying put.” 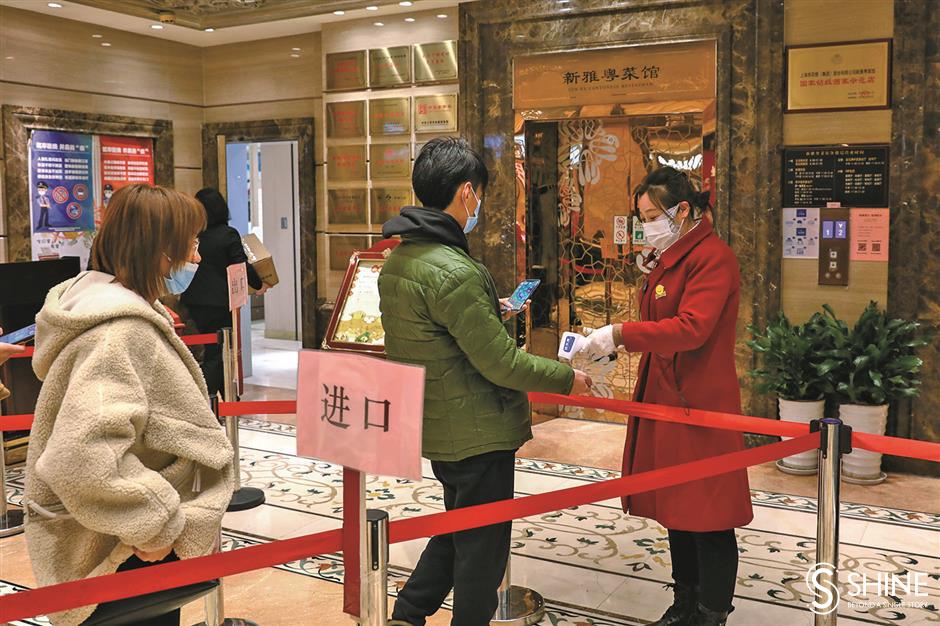 People have their temperature checked before entering the Sunya Cantonese Restaurant. 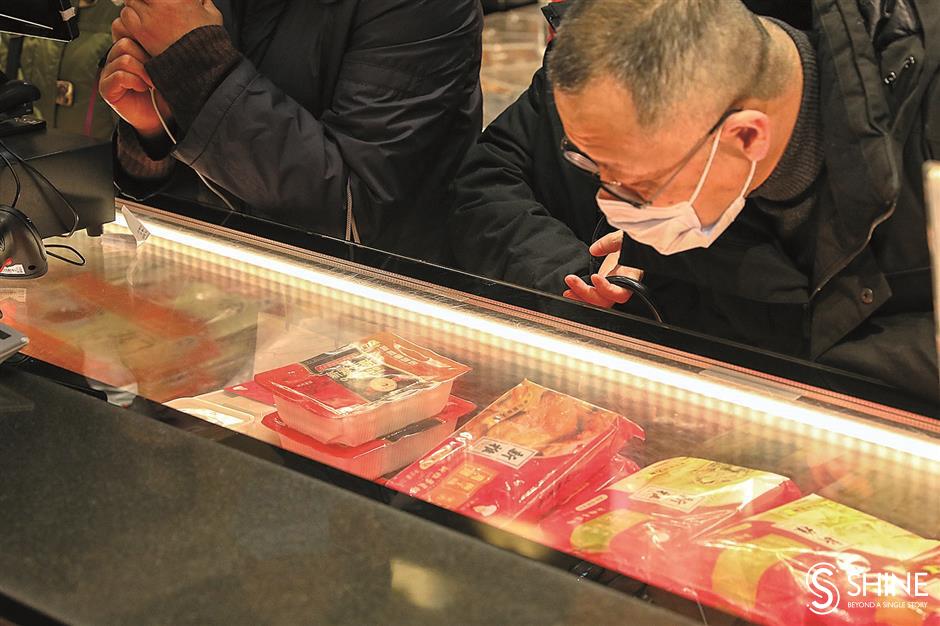 Customers check semi-prepared dishes for the Chinese New Year’s Eve dinner at Sunya Cantonese Restaurant on Nanjing Road Pedestrian Mall in Shanghai as people are encouraged to cook the dinner at home.

Nearly 300 of the 350 workers at Lin’s factory are not Shanghai native. More than 100 have decided not to return to hometowns this year, while 20 have left and about 50 said they will. Lin said he expects more decisions in the coming days.

“The bonus is more than usual, but it’s hard to compensate for a family reunion once a year,” said a hesitant 24-year-old worker surnamed Wang who works at the factory and hails from Henan Province. “I was really worried about losing my job when the virus broke out during last year’s Spring Festival. I wasn’t able to return to work until early March. I don’t want to go through that again, even if the risks may be low.”

Wang said his parents have asked him to stay put in Shanghai, which surprised him a bit. They told Wang that was the advice of village officials, who noted that their county borders Hebei, where a cluster of new cases have been in national headlines for weeks.

In recent weeks, China has been reporting about 100 new cases a day, putting authorities on alert after a long break from cases of community transmission.

William Liu, a Shanghai native who works for an electronics factory in Shenzhen, southern Guangdong Province, originally planned to drive to the eastern metropolis with his wife to spend the holiday with his mother.

Now, lured by up to 15,000 yuan (US$2,320) in additional income, counting overtime pay, he’s changed his mind. His company also is providing some free travel packages to employees to pay for their return to hometowns sometime after Spring Festival.

“Most members of my big family are abroad,” said Liu, “so we don’t usually have any big, special celebration. It’s just kind of symbolic to have the traditional New Year’s Eve family reunion dinner with my mom.”

During typical Spring Festival holidays, the nation manages more than 400 million train trips, or about 3 billion trips if road, air and boat travel for a 40-day period is taken into account.

On December 30, China State Railway Group Co estimated that about 400 million trips would be taken between January 28 and March 8 this year, but the company scaled back its forecast to 296 million after the national campaign calling for workers to stay put.

They have bought some local travel packages, and we will be spending the first three days of the holiday in a local five-star hotel, pretending that we are traveling. I’m quite excited. It will be a real family reunion.

For most people in the services industry, staying put means extra income.

“I’m glad that my home carer is staying this year,” said 80-year-old Wang Jianjun. “She told me that almost everyone in her company is staying in the city and has a packed schedule.”

Wang’s wife died and his son’s family lives abroad. It was always challenging to find domestic help during Spring Festival, until Wang enrolled in the city’s nursing insurance program in 2019.

According to Shanghai TV Station, about 95 percent of the city’s domestic helpers are non-natives. Usually only about 30 percent stay during Spring Festival. This year, an estimated 70 percent will be in town.

Wang is also delighted to spend the Lunar New Year with almost every family member for the first time in five years. His son and daughter-in-law returned last fall, fearing that COVID-19 was getting out of control abroad. His daughter and other relatives who usually travel abroad during Spring Festival are also staying in the city this year.

“They have bought some local travel packages, and we will be spending the first three days of the holiday in a local five-star hotel, pretending that we are traveling,” Wang said. “I’m quite excited. It will be a real family reunion.”

Last year’s travel restrictions forced many travel agencies to develop creative local packages, often featuring some theme, to encourage residents to holiday in their own backyard.

Companies offer incentives for workers to stay put during holiday

Many cities and companies in China are giving financial incentives, including cash bonuses, shopping vouchers, free admission to local attractions, and subsidies for phone calls and streaming, to entice people to stay put.

The city of Heshan in Guangdong Province is offering bonus points to migrant children for the autumn school enrolment if their families don’t travel. That’s a big inducement because it’s difficult for such children to get into good public schools in many cities.

Hangzhou, capital of Zhejiang Province, is offering 1,000 yuan (US$154) to every non-native of the province who pays tax in the city and stays put. Many companies in Hangzhou are also providing additional bonuses.

The manufacturing hub of Yiwu in the east coastal province also offers a package of incentives to encourage employees, including expats, to stay put. The city encouraged landlords to at least halve rents for a month or extend tenancy periods for two weeks for free for non-local workers during the holiday period.

Meanwhile, employees who stay in Yiwu for the holiday can receive digital consumption coupons worth 500 yuan per person through Alipay. For large restaurants remaining open for business, they can apply for a subsidy of up to 100,000 yuan during the holiday.

The southern city of Shenzhen, famed for its vast network of electronics factories, suffered greatly last year when coronavirus struck during Spring Festival and workers were unable to get home. Many Shenzhen companies have raised stay-put bonuses this year.

“My company and its umbrella group are both giving some bonuses and vouchers if I stay in Shenzhen,” said William Liu, a Shanghai native who works for an electronics factory in Shenzhen. “My company has raised the bonus twice after many workers said they were unwilling to stay.”