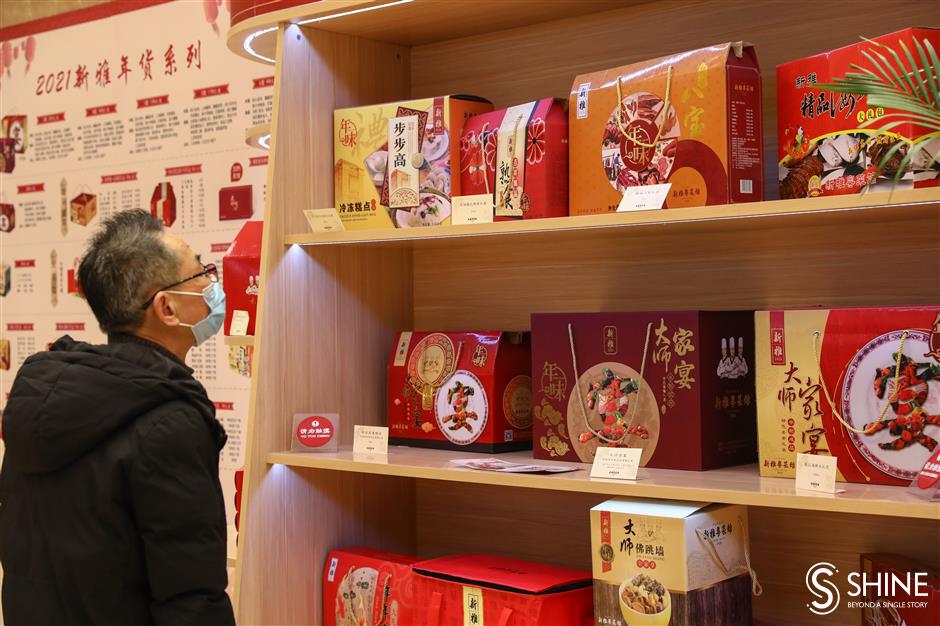 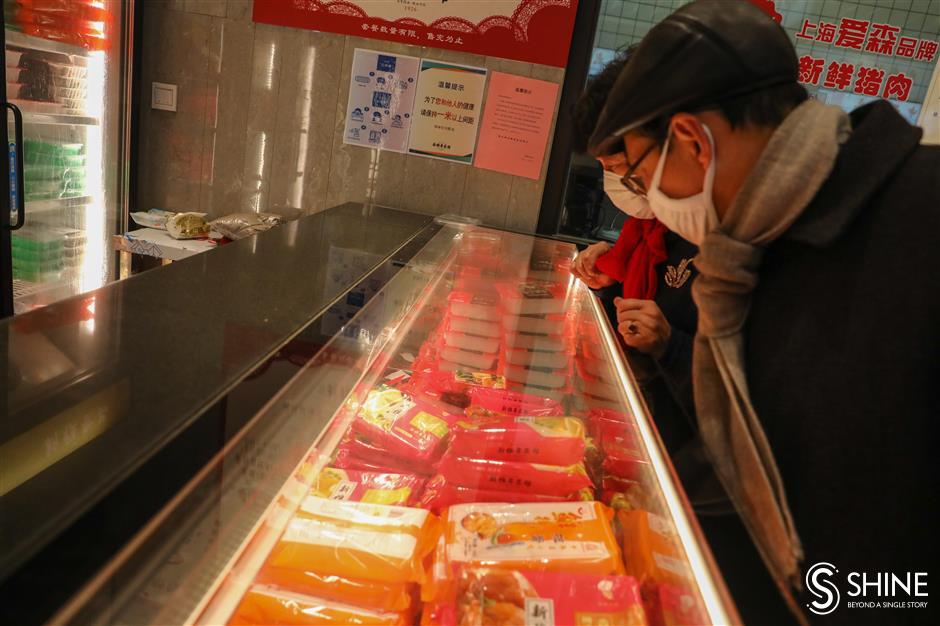 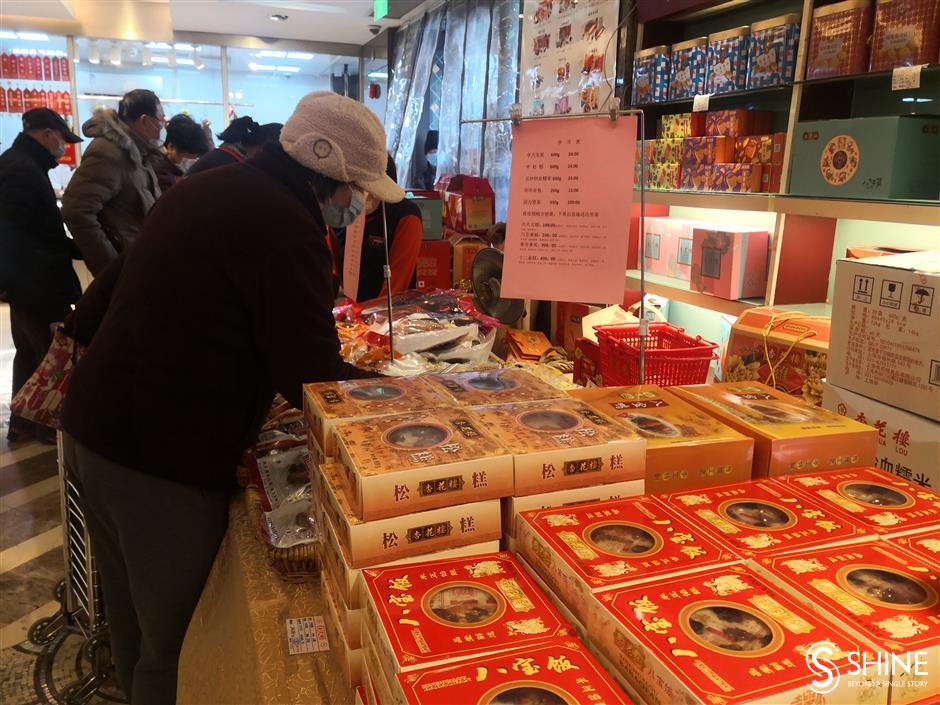 Yang Huaikang, 61, a Shanghai resident in Hongkou District, has made a tough decision: He canceled his booking for the traditional nianyefan, or Chinese New Year's Eve dinner, for his family at a local restaurant.

Restaurants typically get booked out as the traditional festival approaches. With that in mind, Yang made a reservation for 12 people back in September 2020 at a restaurant near the home of his mother, who is in her 80s.

"It’s been a tradition for our family to dine out because it is convenient and there is a festive atmosphere at restaurants with other families on the Lunar New Year’s Eve," he told Shanghai Daily.

The Chinese New Year' Eve falls on February 11 this year.

Yang’s cancellation came on the heels of heightened public health alerts for novel coronavirus after parts of the country reported a spike in locally transmitted cases.

“We had to cancel the meal last year due to coronavirus,” he said. "So I hesitated and even struggled with the decision this year. But given the age of several family members in their 70s and 80s, I made a decision that respects their health.”

He said he hopes the family can reschedule a dinner out together later this year.

Family reunion banquets are one of China’s most cherished annual traditions. However, lingering vestiges of the pandemic is changing the way people will celebrate Chinese New Year’s Eve this year.

As Shanghai authorities step up precautions against the virus, more people are planning to hold reunion dinners at home. National authorities are urging people to stay at home if possible and avoid travel or large gatherings.

Yang is part of a wave of people canceling restaurant bookings.

Instead, semi-prepared food packages that require only simple cooking are enjoying a boom in sales. 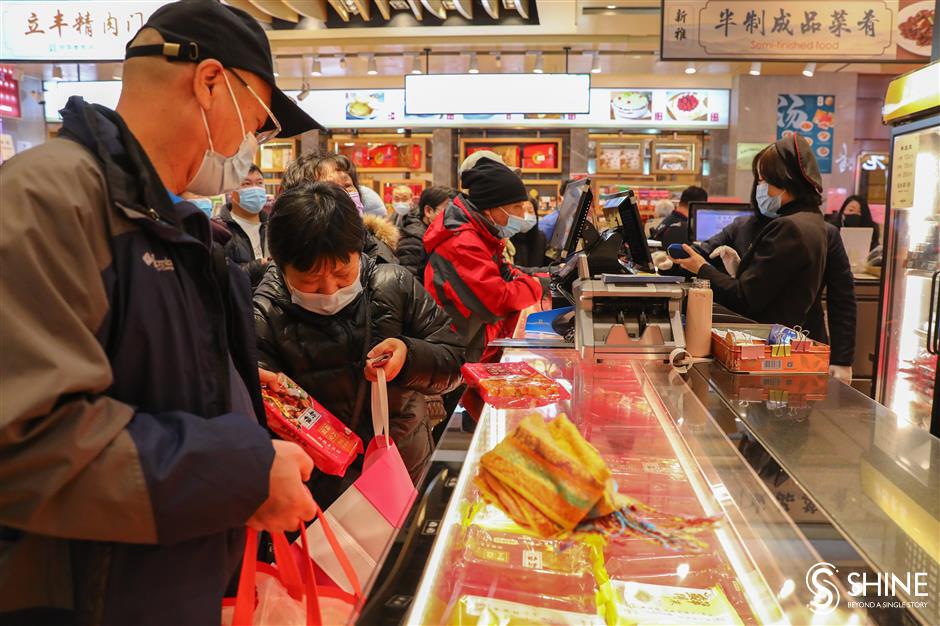 Amy Jiang, who works at a state-owned food company in Shanghai, said she won’t be returning to her hometown of Yichun in Jiangxi Province this coming Spring Festival.

"My company has advised us to stay in the city during the holiday, and I heeded the call,” she told Shanghai Daily. "I have ordered a nianyefan food package and will cook at home. I will have dinner with my boyfriend and another two friends who are also from Yichun.”

She said her parents in Jiangxi support her decision, given the current wave of epidemic cases in parts of the country.

Sunya Cantonese Restaurant at the Nanjing Road Pedestrian Mall, which dates back to 1926, said its nianyefan package sales in December rose 20 percent from the same period a year earlier.

The eatery was one of the earliest to initiate Lunar New Year’s Eve meal packages in the city. It is offering five sets, ranging in prices from 998 yuan (US$154) to 2,598 yuan.

"Our chefs are at their busiest from now through the Spring Festival holiday,” said Zhu Hong, Sunya's deputy executive chef. “They are on 24-hour shifts to meet the demand."

Sunya's partially cooked meal sets can be ordered as takeaways at the restaurant or online.

"Sales are projected to be better this year," Zhu said. “Preparation time for semi-cooked food such as chicken soup with fungus and duck soup with dried bamboo shoots is significantly shorter this year. In the past, people needed to simmer the soups themselves with prepared ingredients, which took four to five hours. Now, the entire cooking process takes only 30 minutes.

"This allows customers to be able to enjoy the expertise of our chefs at home," he added.

"We have increased the diversity of cuisines by 30 percent from last year,” said Wang Xiaping, catering manager of Xing Hua Lou. “They cater to the demands of both small families from four to six people to big ones of between 10 and 12."

She added, “For the first time, we are offering free delivery of nianyefan packages to limit human contact. Sales of partially cooked banquets have been quite robust. We have already witnessed a 10 percent increase of sales over last year." 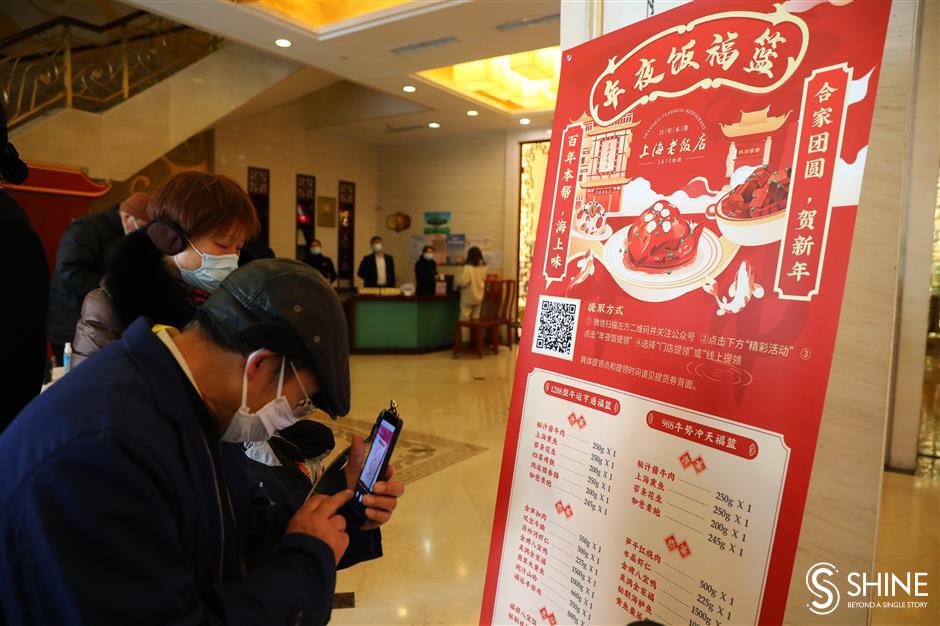 A consumer checks the menu of semi-prepared nianyefan packages at Shanghai Classical Hotel. 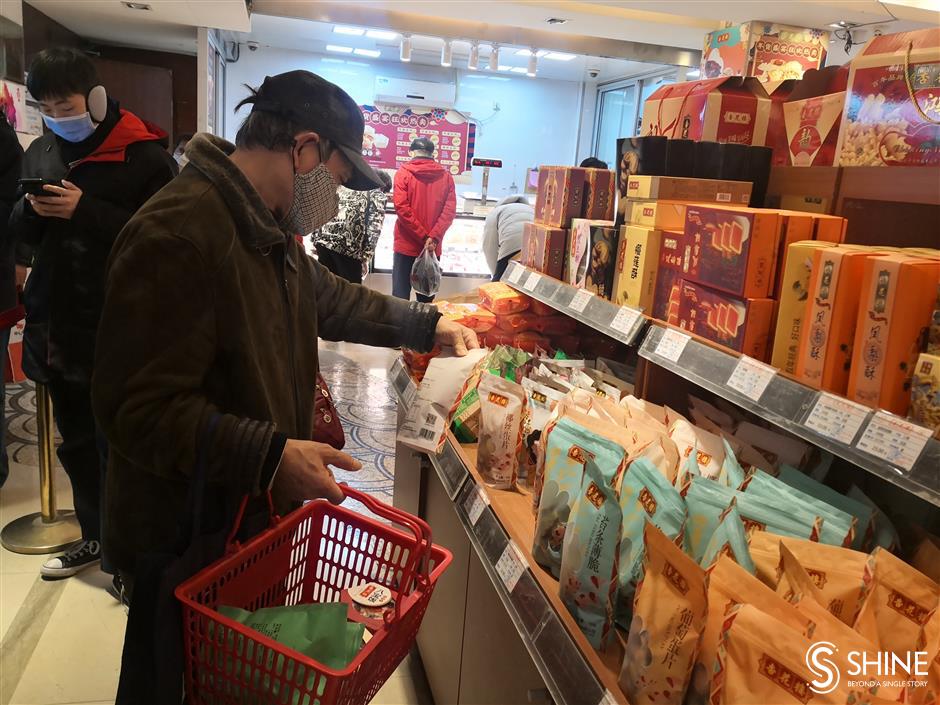 A consumer checks food at Xing Hua Lou restaurant in preparation for the traditional festival.

The Park Hotel said its nianyefan packages have almost sold out, with sales surging 20 percent.

Most of its orders come from loyal diners, who can enjoy the excellent tastes they are used to while dining at home, said Qian Min, deputy general manager of the hotel.

"Customers also include people not native to Shanghai, who are remaining in the city during the holiday," said Xiang Kaiyu, general manager of the eatery.

Shanghai Classical Hotel is offering three packages for nianyefan this year, including some of its signature Shanghai-style cuisine, such as babaoya, or eight-treasure duck, and fried river shrimp.

They are easy to cook, and the restaurant has even uploaded a video on its WeChat account explaining step-by-step procedures.

Packages for families of three to four people sold out within a month, the restaurant said.

"The supply of nianyefan sets is expected to increase about 30 percent this year," said Jin Peihua, deputy secretary-general of the Shanghai Restaurants Association.

The association has published a list of 434 restaurants that provide residents with cooked or partially cooked meals.

Among them are time-honored brands such as Lu Bo Lang, Sunya Cantonese Restaurant, Da Fu Gui Restaurant and Xing Hua Lou Restaurant, as well as many popular eatery chains. 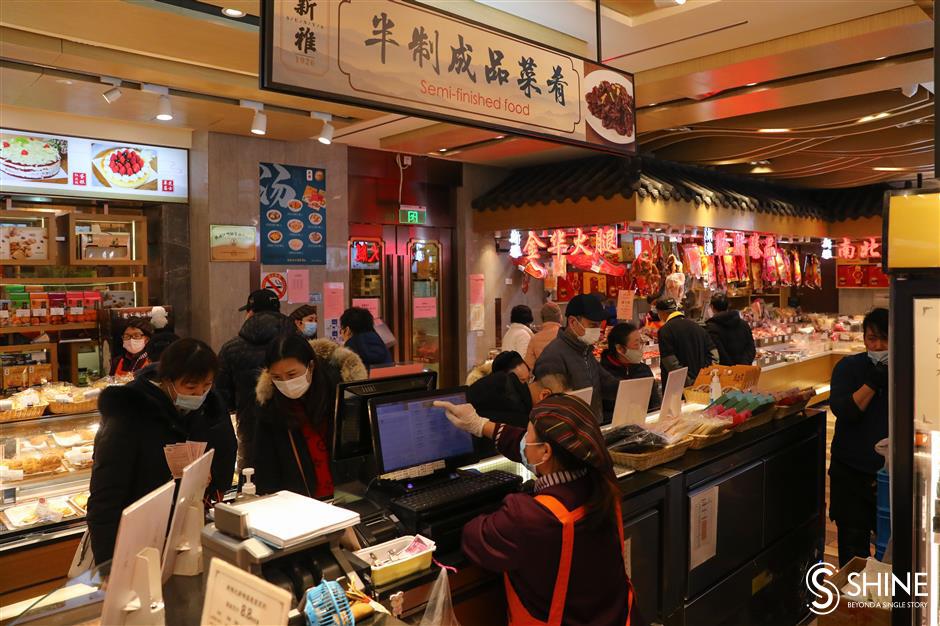 Shanghai Commission of Commerce said there are more varieties of meals available for takeaway or delivery this year, many at affordable prices.

"The sudden outbreak of the epidemic last year happened just before the Spring Festival and posed a heavy blow to the city's catering industry," said analyst Yuan Lijun with Business Information of Shanghai.

"It prompted many catering companies to explore new channels,” he said. “Some have built or expanded central kitchens or food-processing plants.”

The city's supermarkets and e-commerce food suppliers are also taking advantage of the new stay-at-home trend.

Carrefour China said it has increased the varieties of its partially cooked cuisines to 25 this year, in cooperation with Sunya Cantonese Restaurant. It has also teamed up with Xiao Nan Guo, a famous Shanghainese restaurant chain, and Da Xi Di, a frozen food brand in China, to ensure supply.

Grocery e-commerce platform Dingdong Maicai said it has developed nearly 100 varieties of cuisines that are quick to cook.

"They cover flavors from across the country, which will bring comfort to rural migrants who are staying in Shanghai instead of going back to their hometowns for the holiday,” said Xiong.

Some of the meals were developed in cooperation with big restaurants, such as the local Michelin-starred Jardin de Jade. 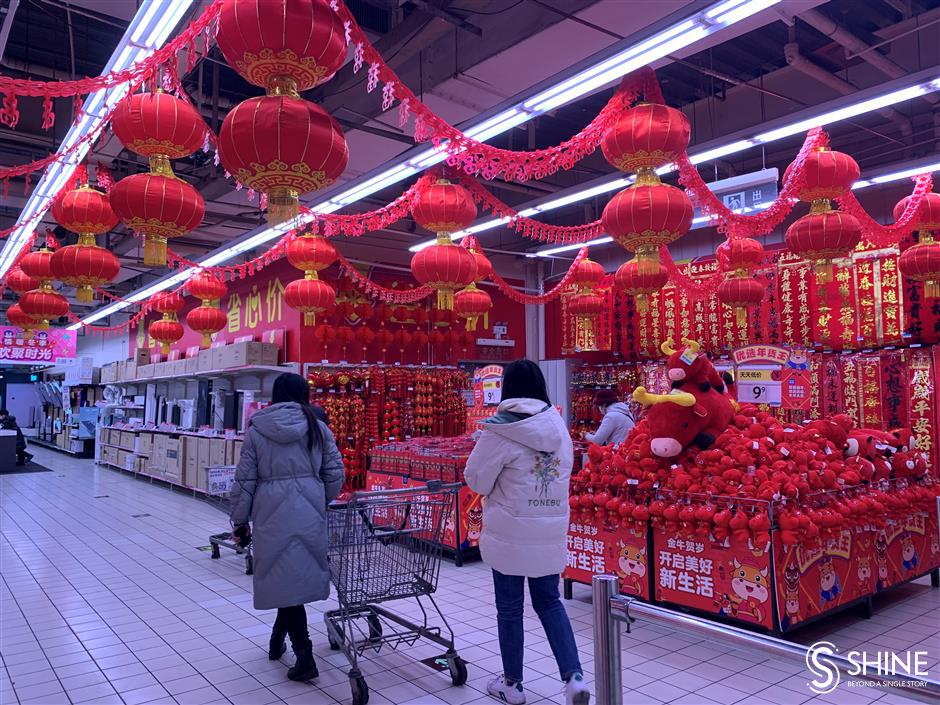 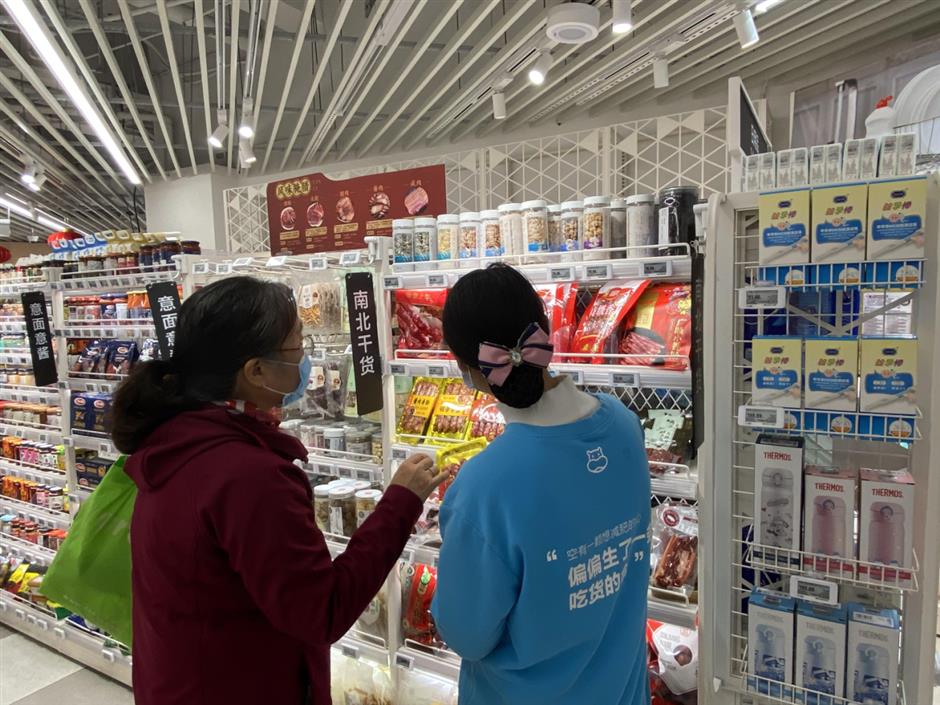 A consumer purchases food at Freshippo. 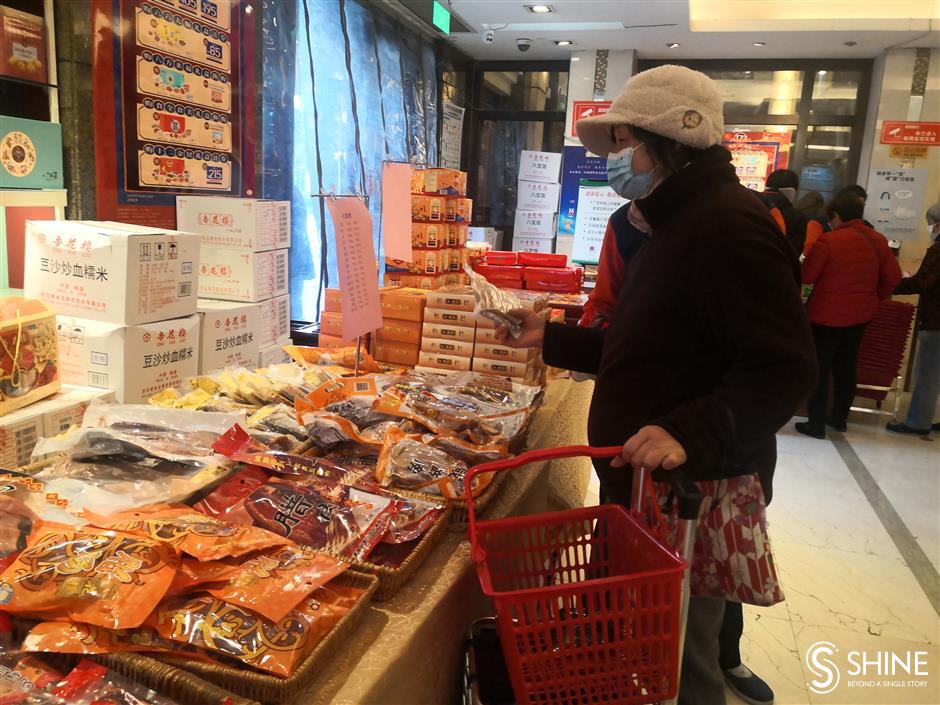 Semi-prepared meals cost between 400 and 600 yuan, and some are tailored for dinners of no more than six people.

"Instead of catering to big gatherings, we are offering smaller potions, even in our most popular products, such as Shanghai-style braised wheat gluten and pork belly," said Chen Meijun, head of Freshippo's catering business in Shanghai.

Last year, sales of these dishes at Freshippo's Shanghai stores during the Spring Festival break doubled from a year earlier.

Alibaba's on-demand delivery site Ele.me said it is expecting New Year’s Eve set meals for one or two people to sell well. The number of search requests for "New Year Eve's Dinner" on its site has surged fourfold in recent weeks.

Delivery services have become the new norm when shopping for New Year’s gifts and necessities. Walmart said it intends to expand next-day delivery to all outlets in more than 130 domestic cities by the end of this month.

Walmart has doubled its supply of staples like cooking oil and rice, and has also increased production capacity for frozen dumplings fourfold at its Sam's Club stores.

Walmart Tianlin Store manager He Wei said migrants particularly like meals that offer them the tastes of their hometowns.

Zhenwei Xiaomeiyuan, a two-year-old startup headquartered in Shanghai, is offering these meals like Kung Pao chicken and scallion pancakes, popular dishes that aren’t all that easy to prepare quickly at home.

"Dozens of new menu items are being developed to cater to the particular tastes of regional cuisines," he noted.

Demand for packaged and semi-cooked meals has pushed online sales up to 10 million yuan in just three months.