A special festival for those deciding to stay 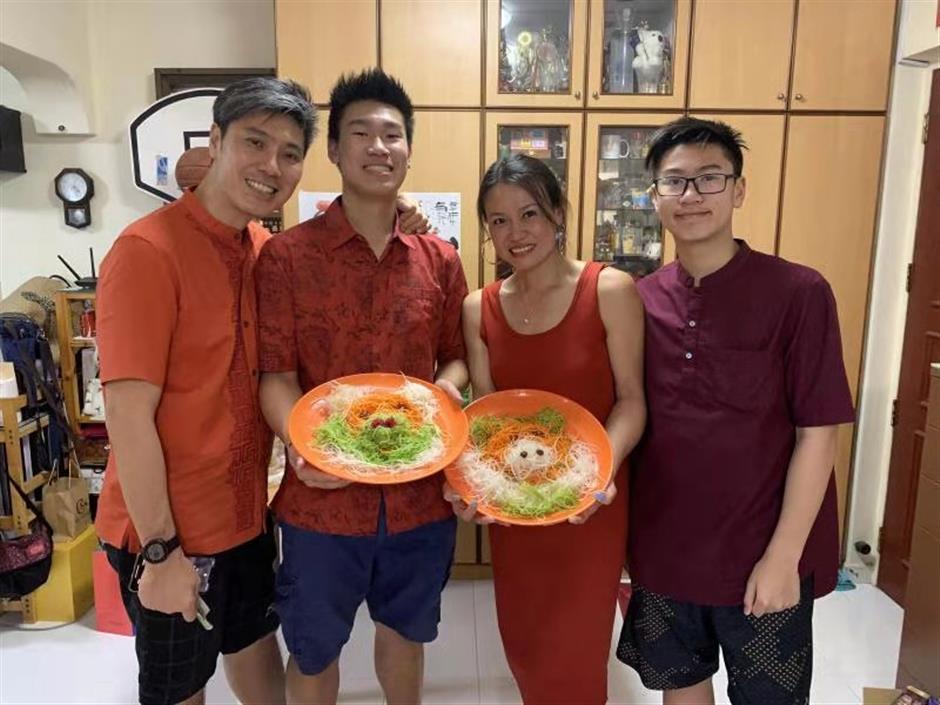 The Chinese New Year, which starts on Friday next week, will be a very special one for the family of 16-year-old Singaporean Macken Lee, who will spend the holiday in Shanghai for the first time.

With the worldwide coronavirus pandemic entering its second year and a few sporadic cases in the city recently, the city government and local medical experts are encouraging migrant workers and foreigners to enjoy Spring Festival in the city rather than risk their health by traveling back home.

The Lee family are among those answering the call.

They moved to Shanghai around 12 years ago. Living in the Biyun International Community in Pudong’s Jinqiao Town, which is known as the city’s “small United Nations” and houses more than 3,000 foreigners from many countries, Lee, his parents, and his elder brother usually returned to Singapore to reunite with other family members during Spring Festival.

However, they decided to stay in their “second home” of Shanghai this year because of the pandemic.

The celebrations for Chinese New Year in Singapore are similar to those in China. According to Lee, their celebration always begins on New Year’s Eve, when most families gather around a large hotpot.

His favorite New Year dish is Lo Hei, which is made with fresh vegetables, crackers, sweet sauce, and a topping of choice. “When the dish is laid out; everyone comes together and starts to ‘Lo,’ in other words mix the dish while chanting good fortunes. Eating the food with all the blessings gives us our prosperity and luck for the new year,” he said.

“After the meal, we gather around the TV to watch the various Chinese New Year programs. Around midnight, we would go to the temple and pray for good luck and a smooth year ahead for ourselves.“

His mother, Janice Yeo, said: “We will make food together and bring our blessings and gratitude to the workers in the community, who also cannot make their way to their hometown. And I will visit different families in the community with my ukulele and sing for them.”

Yeo is a founder of a group of ukulele players called the “Uku Angels” comprised of people from different countries who want to do community outreach through music. The “Uku Angels,” who have performed to groups such as the elderly and helped those in need, put on a performance for security guards, sanitation workers and community workers last Friday. 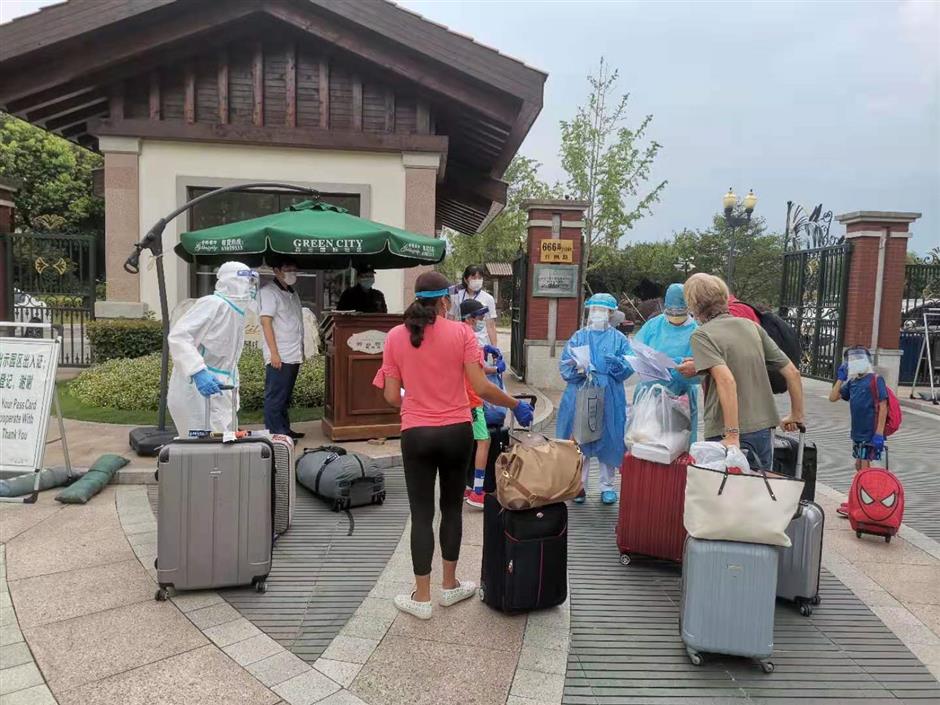 Biyun community workers dressed in protective clothing wait at the gate to help residents with health checks and registration when they return and need to have home-bound quarantine.

The tradition of Chinese New Year celebrations in Singapore was shared by Lee at an activity organized for children in the Biyun community.

They were encouraged to write something about their hometowns to share with the others.

The community called on the children to be “small guards” of pandemic prevention in the community who can remind others of taking prevention, following the rules and say thanks to community volunteers and workers who contribute to fight against coronavirus.

Earlier, the community collected New Year wishes from residents and made them a set of cards to hang as decorations.

“For workers in our community who spend their Spring Festival in serving the people, we invited calligraphers to create calligraphy works of New Year blessings as gifts to each of them with a thankyou note from us,” said Jia Jia, Party secretary of the community. 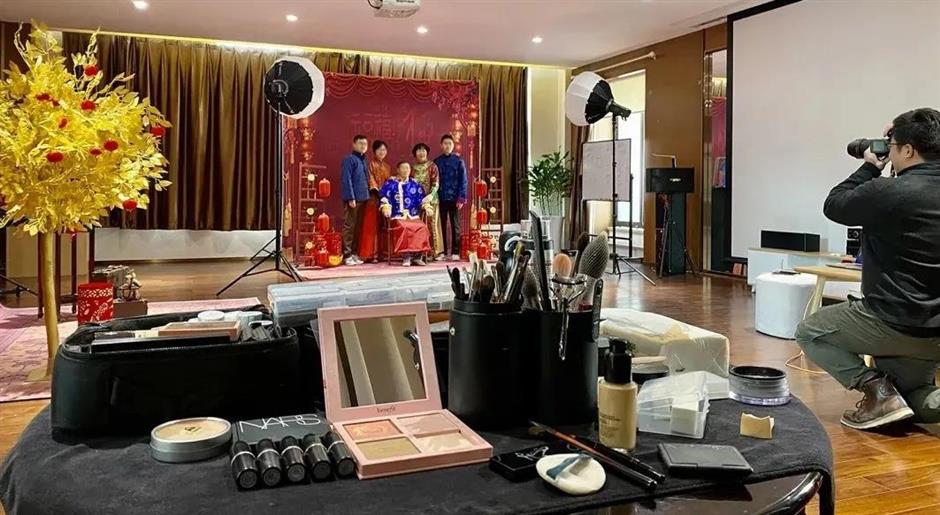 Other local communities are making efforts to bring a sense of Chinese New Year to their non-native population.

At Wisdom Park, another residential complex in Pudong, a number of events are being held to celebrate.

“Over the last weekend, we invited families in our community to take a family photo in front of a set with Chinese New Year elements we’d prepared,” said Wu Jun, an assistant manager with property management provider Dahua’s Shanghai branch who is responsible for the community. “After the event, we keep the two sets in the multi-function hall of our building for residents who missed it to take their own photos. And this weekend, we will invite a calligraphy teacher to teach our residents to write their own chunlian, or spring couplets.”

To reduce health risks, they had to drop some ideas for Spring Festival events but on the fifth day of the first lunar month, when it is believed the God of Wealth will come, it will have a worker dressed as the “god” and hand out small gifts to residents, wishing them good wealth in the coming year.

Since the community’s security guards and sanitation workers all responded to government’s call to stay in the city, there has been no shortage of labor in these positions and they will enjoy subsidies for their hard work. 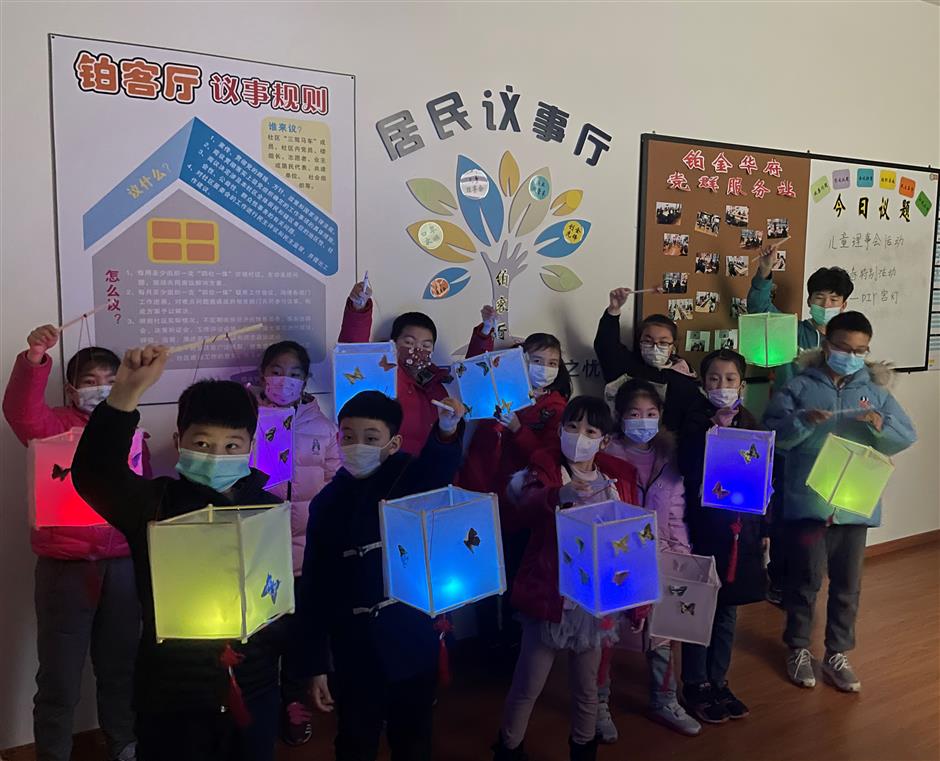 Children with New Year lanterns they made at an event organized by the Bojinhuafu (Platinum Mansion) neighborhood committee.

On the other side of the city, at Bojinhuafu (Platinum Mansion) in Baoshan District, home to more than 1,000 migrants — about a quarter of its population — is also striving to provide better services for residents.

Bao Sijie, the local Dahua branch’s project manager of the community, said it had developed a communication mechanism with residents called “WeChat Housekeeper.”

Each of the property management workers in the community has added residents as WeChat friends so if anything happens, residents can report it to their “WeChat Housekeeper” through this application.

Meanwhile, the community promotes the idea of a “Vitality Building” where residents in a building live as a big family. Bao said in one of the “Vitality Buildings,” the “building chief” invited the other members to share Chinese New Year dinner together and designed activities for their neighbors.

Liu Qiufen, Party secretary of the community, said it had also organized events for residents to celebrate Spring Festival including one where children made their own “palace lanterns.”

Liu said migrant workers spending Spring Festival in the community would receive gifts such as nianhuo, referring to the must-haves for the festival, and food such as dumplings.

“The special period under the pandemic brings the residents and us more tightly together than ever,” said Liu. 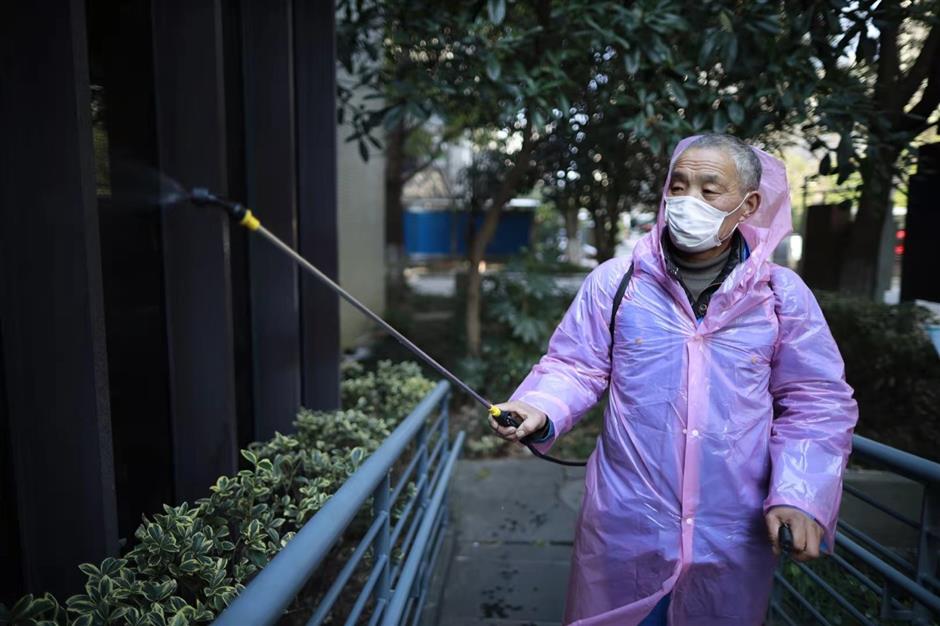 A worker carries out disinfection work at Bojinhuafu (Platinum Mansion) in Baoshan District.

The Changshou Road Subdistrict in Putuo District is encouraging enterprises in this area to provide rewards and gifts to their migrant employees.

The subdistrict takes the requirements of people under quarantine into consideration. Hotels serving as quarantine sites are being asked to offer more special New Year dishes and psychological services are being provided to relieve their homesickness.

Migrant workers are also repaying the kindness of local people. 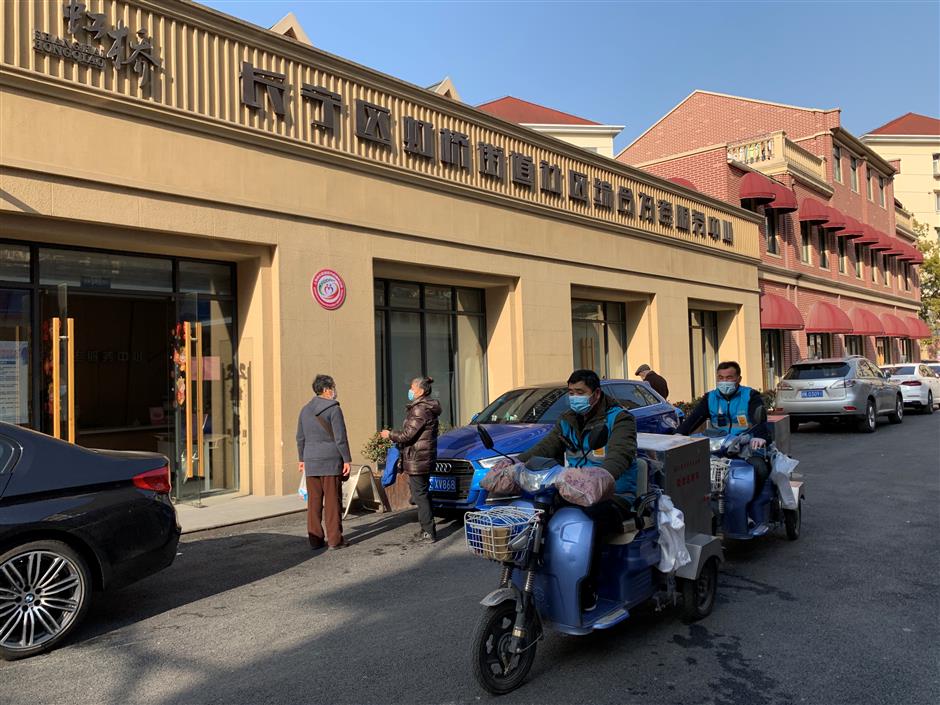 Lou Yuanping and Li Weifeng set out to deliver meals to elderly residents in the Hongqiao subdistrict. 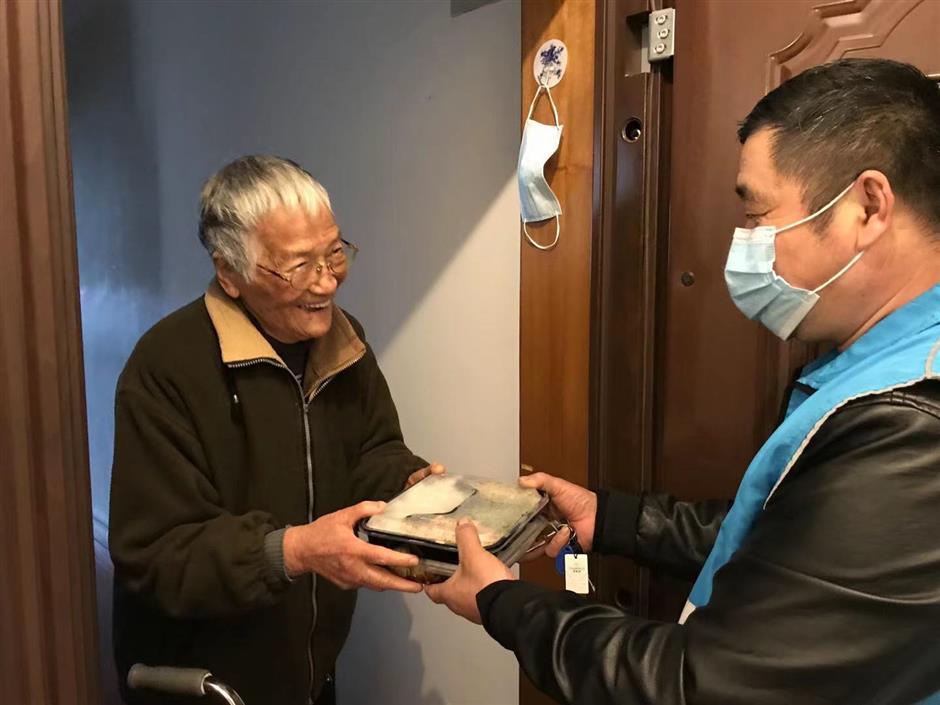 An elderly resident in the Hongqiao subdistrict receives a meal from Lou Yuanping.

The is the second year that 49-year-old Lou Yuanping, a local community migrant food deliveryman from central China’s Henan Province who delivers meals to elderly residents, to spend his Spring Festival in Shanghai.

On Wednesday morning, Lou and his colleague, 43-year-old Li Weifeng who is also from Henan, arrived at the elder care service center of the Hongqiao Subdistrict in Changning District at 8:30am.

There they cleaned and disinfected their food delivery vehicles as well as doing some preparations before the meal boxes came. After the meal boxes arrived at 9:30am in a van, the two quickly put them into the vehicles and set off for residential complexes.

In the subdistrict, elderly residents account for more than 37 percent of the population, with some of them in their advanced years and living alone.

Each deliverymen needs to deliver meals to more than 40 households and to ensure the seniors can all get warm food, they have to rush from door to door.

Lou said he had decided to stay over concern about the elderly people in the community and that his family in his hometown had understood and supported his decision.