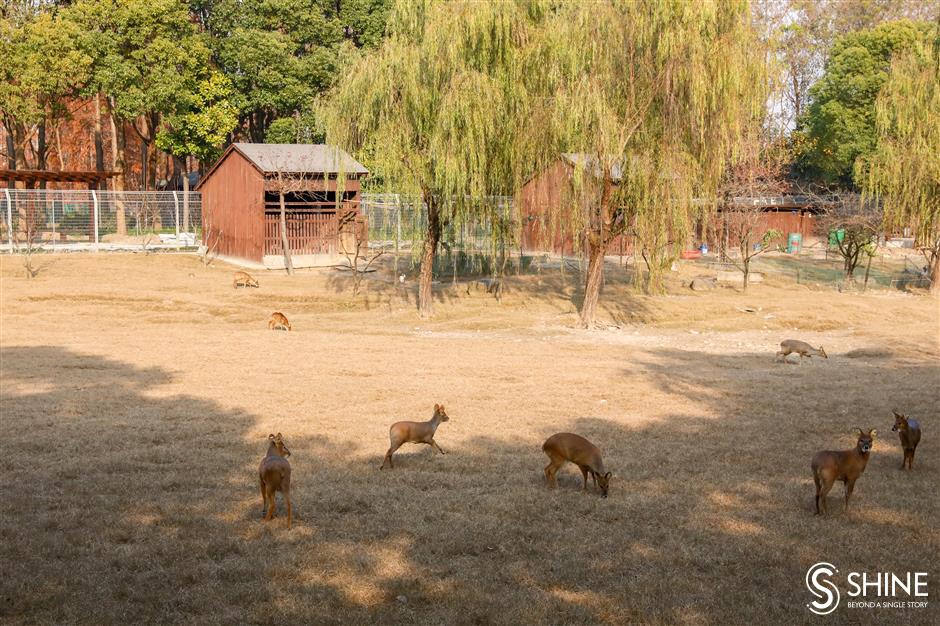 Water deer at the Huaxia Park

It is also at the forefront of efforts to reestablish populations of water deer in Shanghai, where they once thrived in the latter stages of the Stone Age.

The park began wild animal rescues in 2005 and now has a professional team of 12.

"We are able to accommodate mammals, reptiles and birds," said Qian Kai, chief engineer of the Pudong New Area Forestry Station. "With the growing public awareness of animal protection, the number of animals the park rescues increases every year."

"I noticed by chance that the hedgehog was moving very slowly among bushes, so I guessed it was injured,” said Zhang. “I feared it would die or get hurt again, so I dialed the city’s hotline. I waited there for an hour to protect the animal until rescue staff arrived.”

Last year, the park recorded more than 500 rescues of wild animals, according to Qian. That compared with earlier-year average of 200 to 300.

"The COVID-19 epidemic further raised public awareness of wild animals," he said. "People became particularly sensitive because of reports saying the epidemic may have started with wild bats."

He added, "Because some areas in Pudong are suburban, bats native to the city often take winter refuge in crannies of residences and aren’t spotted until spring.”

In one case, an injured serval, a second-class of nationally protected small wild cat, was spotted at a resident's home.

"We used an infrared camera for monitoring and identify it for protection purposes," said Qian.

The park also accommodates wild animals that have been illegally captured after perpetrators are arrested by police, said Qian.

For animals and alien species that the park has no capacity to provide medical treatment, like snakes and accipiters, a variety of hawk, the animals are sent to Shanghai Zoo or the Shanghai Wild Animal Park.

Injured animals are released back into the wild after they have recovered from treatment, said Qian.

Staffers carefully monitor whether animals, such as injured migratory birds, have avian influenza before sheltering them.

The park's rescues and shelters have significantly alleviated pressure on Shanghai Zoo and the Shanghai Wild Animal Park, according to the Shanghai Greenery and Public Sanitation Bureau.

However, the need for rescues and shelter is fast outstripping resources, Qian said.

“We are short of hands and under pressure," he said. "Some residents complain when we take long time to respond to their calls, but rescue is just part of our work." 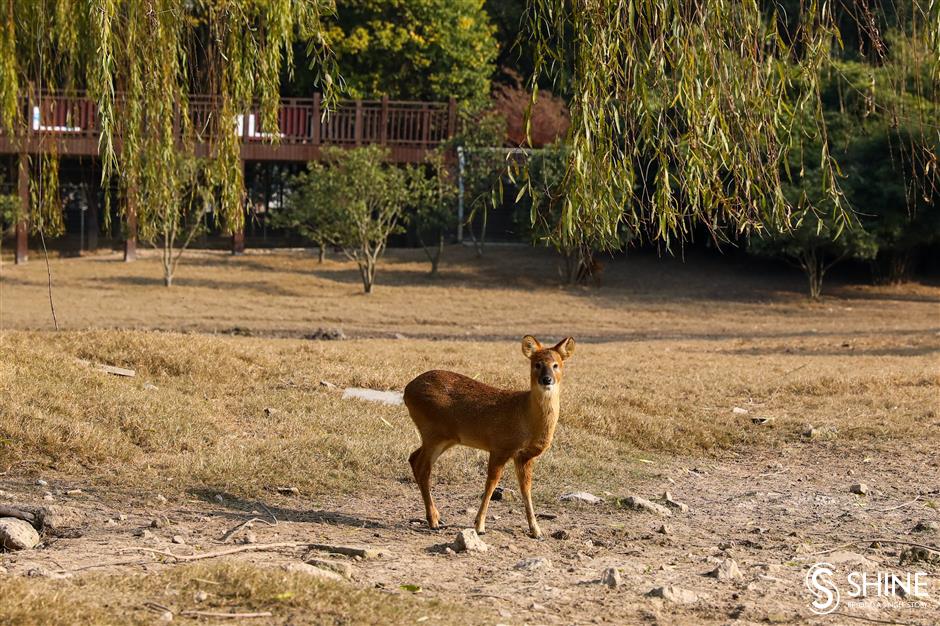 The park serves as an experimental center in bringing back the city's oldest residents — water deer.

The park also serves as an experimental center in bringing back the city's oldest residents — water deer. Fifty are now calling the park home.

Water deer, which favor wetlands, are native to East Asia. They are also in the second tier of nationally protected animals in China.

The deer roamed in Shanghai as early as in the Neolithic period. Bones of river deer were found in the Guangfulin archeological site in Songjiang District.

In the 1980s, they were still common in suburban districts like Qingpu and Fengxian. However, their population declined significantly as human activities disrupted their natural environment, and they were almost extinct in Shanghai in the 20th century.

"Hunting was rampant at a time due to lack of animal protection regulations," said Zhang Dexiang, who manages the water deer garden in the park.

The city began working to save the deer in 2007. A pilot project was launched at Huaxia Park that year, with 21 water deer from Zhejiang Province released into the park to see if the animals would adapt to the climate and environmental conditions.

"It was a cloudy night when 13 females and eight males arrived at the park, which I still remember clearly," said Zhang. "They traveled all the way from a remote island off the Zhejiang coast, some of the trip taken by boat.”

"The aim of the reintroduction program is to make the public aware that the animals once flourished in Shanghai and to show the importance of a harmonious coexistence between animals and humans," he said.

The water deer population is growing steadily. More deer have been born in the park, and some of them have been released to other parks or greenbelt areas.

Aside from Huaxia Park, some of the deer live in Punan Greenland, Binjiang Forest Park, Nanhui Dongtan, Mingzhu Lake Park and Xinbang Greenland.

Their average life span is seven to nine years, according to Zhang, with the oldest on record being 11 and a half years. 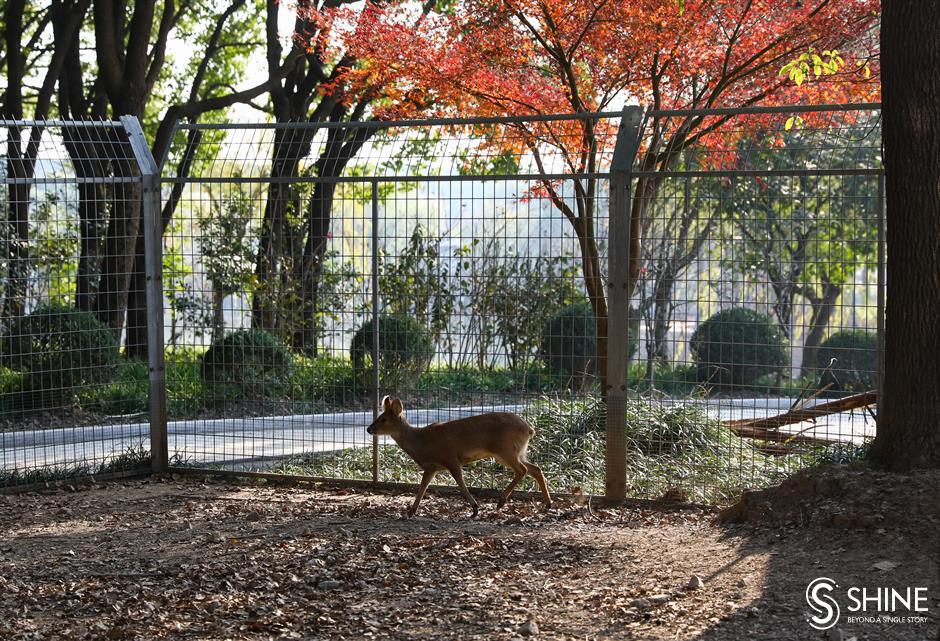 The deer give birth between May and late June. Each in the park has a number and GPS tracking to monitor their movements and health.

"Water deer are very timid, and their area in the park has no other animals or human activity to ensure their safety," said Zhang.

Last month, 12 healthy adult deer were released into the Laogang ecological corridor in Pudong. Their biology information has been documented and four have GPS trackers.

Monitoring their movements and health will help officials accumulate experience in the promotion of biodiversity in the city, according to the Shanghai Greenery and Public Sanitation Bureau.

The construction of habitats for water deer is an important part of that process, the bureau said.

As the city's habitats for wild animals improve, more animal residents are spotted.

As many as 3,000 raccoon dogs are thought to be living in Shanghai. GPS and infrared cameras are being used to observe their movements and behavior, said researcher Wang Fang at Fudan University's School of Life Sciences.

In July, there were reports of a resident bitten by a raccoon dog, a relative of the fox, at the Milan Nuoguidu residential community in Songjiang District.

The neighborhood committee attributed the rising number of the animals to the extensive greenery in the community and to residents leaving food outdoors for stray cats.

Wang and his team surveyed nearly 200 residential complexes in the city last year and found traces of raccoon dogs at 147 of them.

Wang's team and Shanghai's forestry authorities plan to put GPS collars on another 10 raccoon dogs this year, and more than 300 infrared cameras have been installed across the city at university campuses, parks and residential complexes to monitor their activities.

"We hope to collect a large amount of data to help us find management solutions for wild animals in the city within one or two years," said Wang.

The data collection will cover raccoon dogs, weasels, hedgehogs and birds, he said.

Shanghai Forestry Station said it has been cooperating with Wang's team to collect data on rescues and shelters.

"A lot of basic work is involved in determining how to protect wild animals living in the city," said Li Zirong, deputy director of the station. 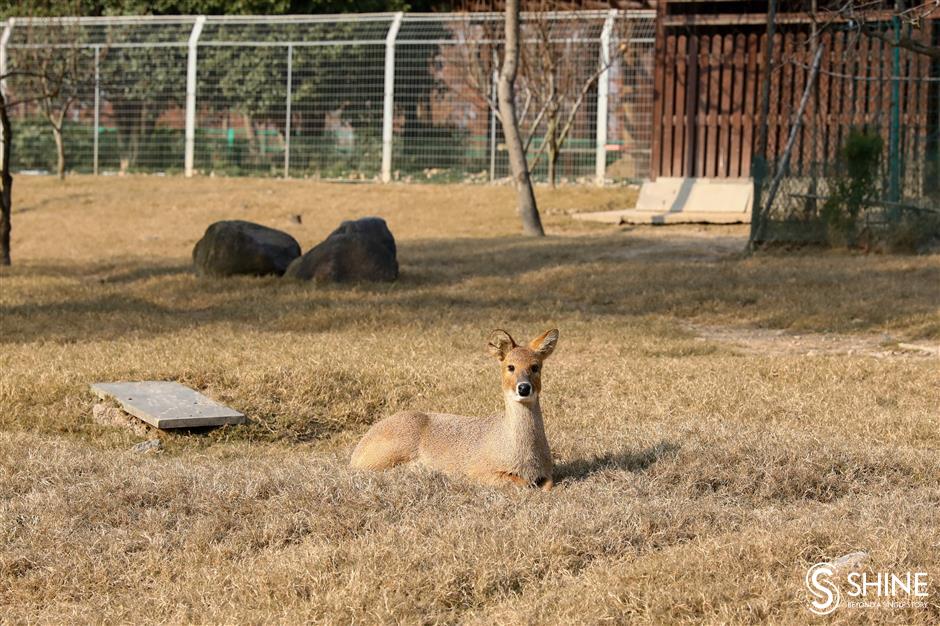