Searching for Starbucks in a rural village 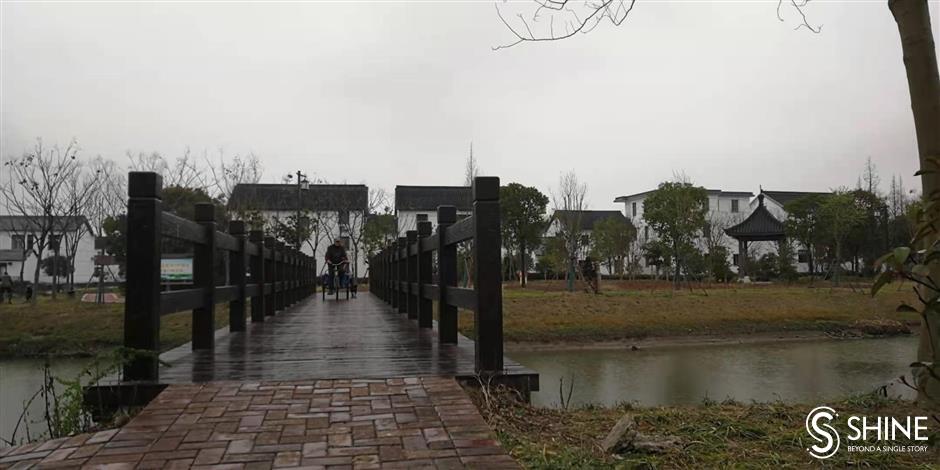 A farmer in Xuyao Village of Qingpu District sets out for his fields.

"Hi, ah po, how are you?" I greeted an old villager as she came along a brick path strewn with grass, her feet slow but sure. (In colloquial Chinese, ah po means a granny.)"Hi!" she looked up at me with a ready smile. An empty plastic bucket was hanging from her folded left arm."Ah po, are you just back from your field work?"She nodded yes to me. "I'm going home now to prepare for lunch." She wore a plain-cloth wadded jacket and a pair of rain-proof shoes. It was a drizzly morning. Wrinkles spread evenly across her face, which beamed with the sense of serenity you often find in someone whose life has been tied to the land.I was attracted to her village, Xuyao, by a report in Xinmin Evening News that Starbucks would soon open an outlet there. How could it be? Was it just another marketing stunt? As the report gave no details, I decided to see for myself.The village in western Shanghai's Qingpu District is about 12 kilometers to the northwest from where I live. The moment I got out of my car and set my foot in the village yesterday, I knew it was different from many others I had seen – even before I discovered the site for the said Starbucks. 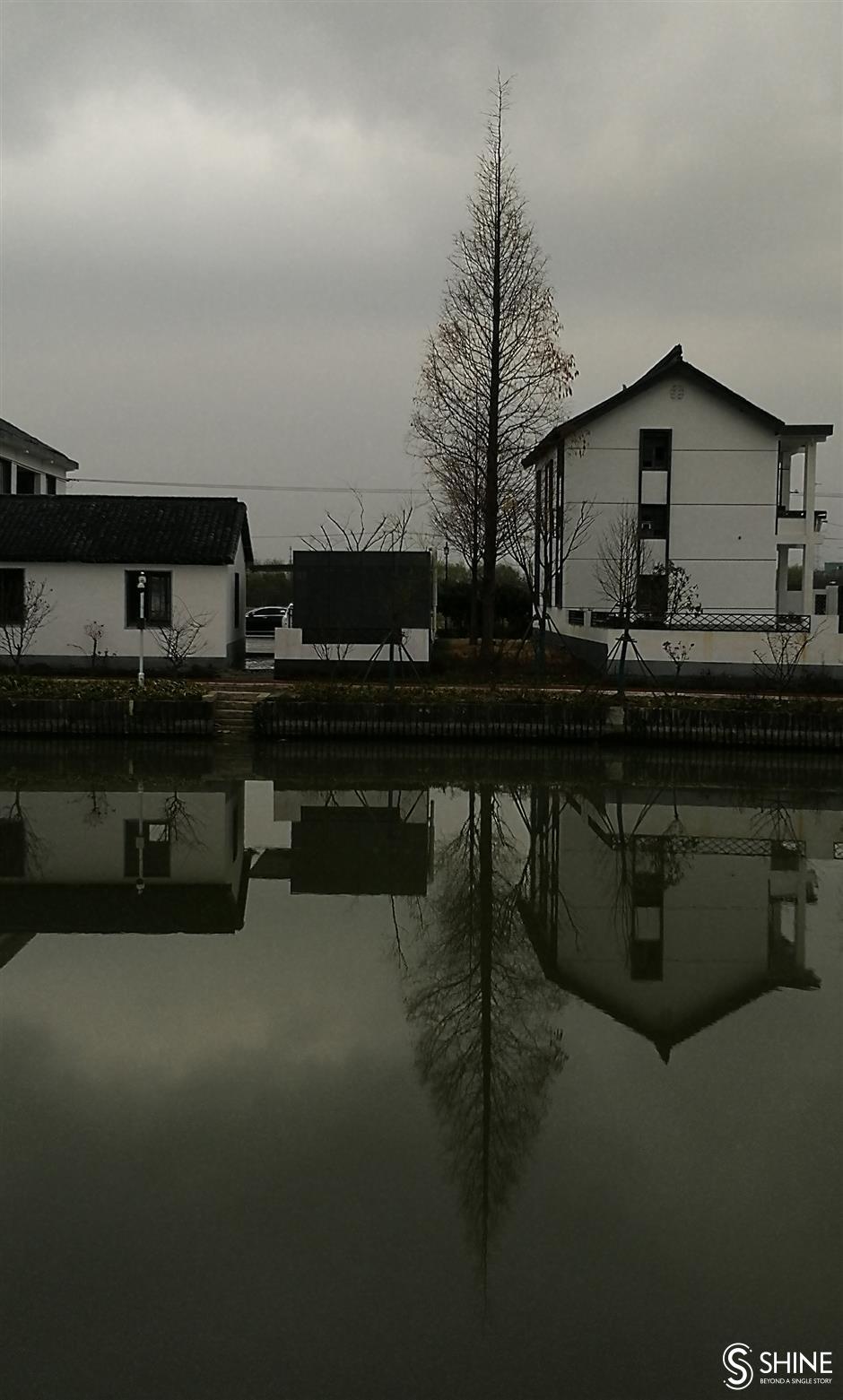 Farmers' houses are reflected in the clean waters of a river.

As I sauntered in the rain, rows of tree-flanked white-wall farmers' houses and their reflected images in crystal-clear waters met my eyes. Large tracts of arable land lying by big rivers were well plowed, ready for the planting of spring crops. My casual "adventure" ultimately led me into a garden of groves where I ran into the ah po returning from her morning work in the fields."Your village is so beautiful," I said to her."Isn't it?" she said. "Is this your first time here?""Yes," I replied."Many people came here for a visit last year. Hundreds of them, almost every day," she said in a fond memory, as if to herself. "It is beautiful. Roads are better and walking is easier." The garden of groves is hardly seen elsewhere.She pointed to her house across the river we stood by. "I live with my children. They all work in nearby towns but live with me in the village. I don't earn much, but life is getting better." 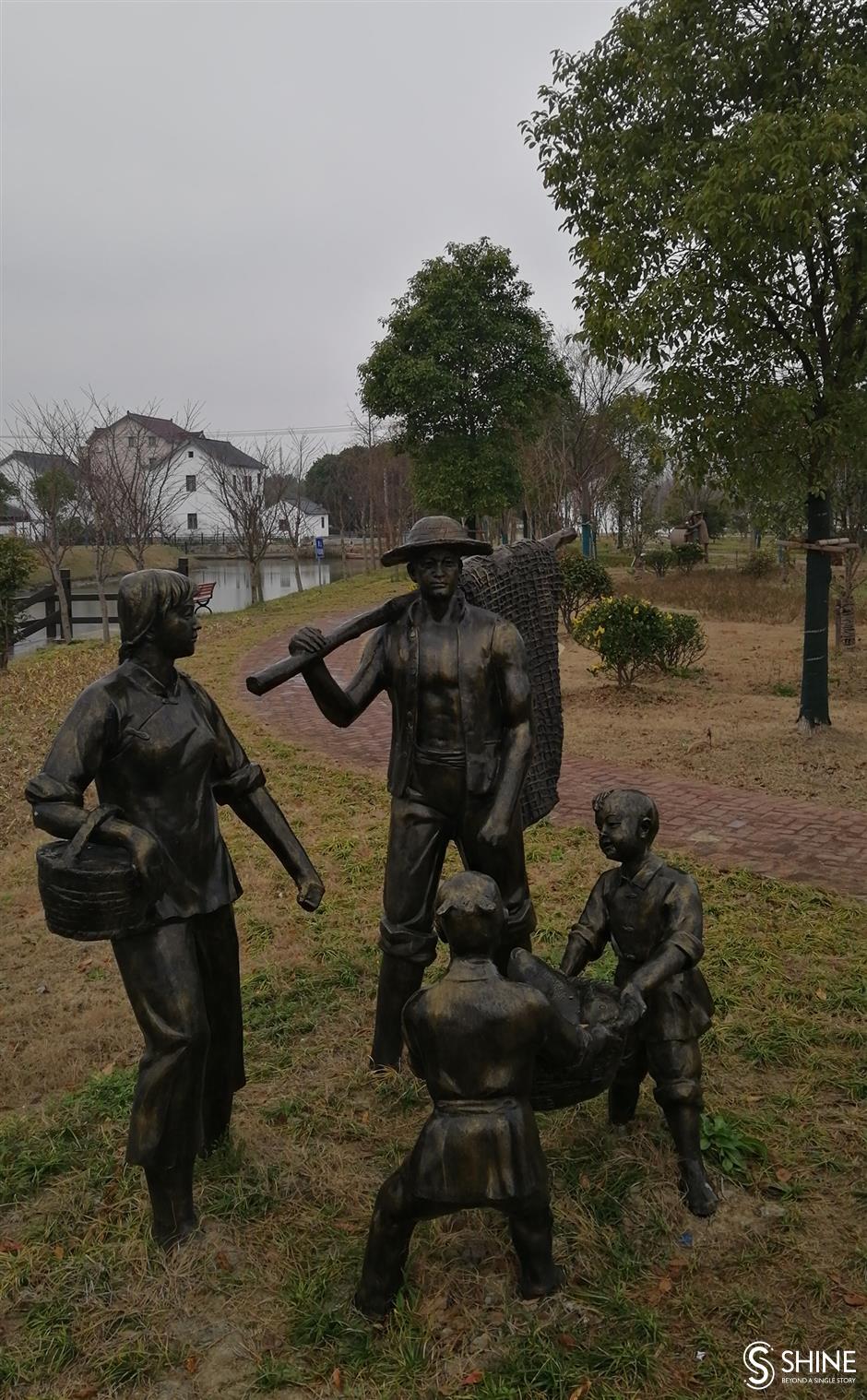 A corner of a picturesque garden in Xuyao Village

Her family story may provide a footnote to a better rural life in the making, in which a lifetime peasant like her has land to till, and surplus labor like her children can find jobs near home. Her story ultimately illustrates the spirit of this year's No. 1 central government document, which was released on February 21. It calls for enhanced efforts to beautify the countryside and boost county-level economies.Over the past few decades, hundreds of millions of farmers across China have left their homes to seek jobs in faraway cities. While having contributed to and benefited from this unprecedented urbanization in modern Chinese history, migrant workers often leave their elderly parents and young children at home. And despite decades of city-bound migration, there are still about 500 million regular residents in the countryside. Giving villagers a comfortable life near their homes, therefore, will be key to building a modestly well-off society.To attract more farmers to work near home, a village has to think out of the box. It needs to create job opportunities outside traditional agriculture. After all, labor-intensive agriculture has become a thing of the past. Wen Tiejun, a renowned expert on the rural economy and a professor at Renmin University, told Beijing News in an interview on February 22 that it's hard to increase farmers' incomes today through agricultural development only. There must be a combination of agriculture, industry and services, as well as a two-way flow of sources between cities and the countryside, he said.In the case of Shanghai's Xuyao Village, that's where Starbucks comes in.After waving goodbye to the old villager, I moved on, all the way breathing fresh countryside air and asking different people for the site of the future Starbucks store. The 3.55-square-kilometer village is compact enough for you to feel cozy and yet spacious enough for you to get lost. As I ambled through gardens and fields, I came across another ah po, sitting at the gate of her courtyard with her middle-aged son. She beamed toward me as if ready to take up any of my questions. I asked her where the future Starbucks shop would be, and she waved her head with an apologetic smile. Her son stood up and kindly gestured for me to go straight ahead and ask someone near the administrative center of the village. Like the first ah po I met, they were nice to a stranger asking for directions. This reminds of an easygoing way of life the late sociologist Fei Xiaotong (1910-2005) once said about many Chinese farmers.As I made my way forward, I found myself striding into the courtyard of a company called Chongxu Commercial Investment Management. A senior manager named Hou Weifeng came forward to greet me. Having understood my question, he pointed me to a nearby two-story farmers' house with a big courtyard – it is being renovated to become the Starbucks store. 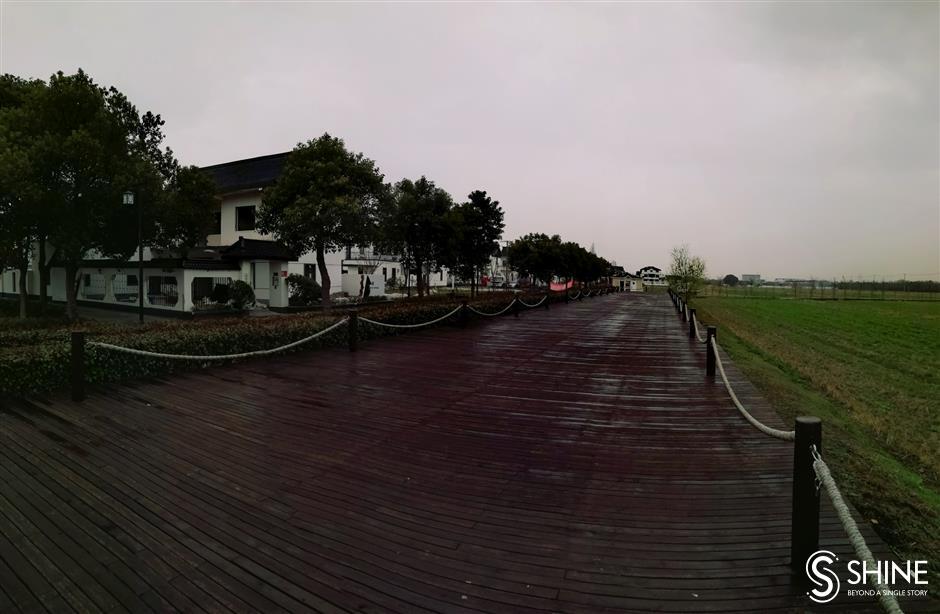 The two-story house (left) is the site of the future Starbucks store.

When I approached the site and sized it up from a proper distance, I found it seated at the crossroads of a boulevard and a country road, shaded under big trees and overlooking a vast stretch of cropland, a corner of which has a wide wooden path for pedestrians. At the end of the path there's an auto-flush public toilet rarely seen in other villages.As I went about the said Starbucks site to study its geographic advantage or disadvantage for a business, Hou came as well, braving the rain which was now thickening. He came to monitor the progress of renovation."Will Starbucks open by the end of this year?" I asked."Not that late," Hou said. "It should be a matter of a couple of months.""How will Starbucks do business here?" I wondered."Its business will be diversified," Hou explained. "It will mainly offer delivery services to customers in nearby regions which have no Starbucks yet." And city people may well want to enjoy coffee amid the fragrance of cropland at weekends, he added.For Hou and his colleagues, Starbucks is also part of their services to make the village more attractive to future settlers – not just visitors. Here's what Hou and his colleagues do: They invite entrepreneurs from around the country to invest in Chonggu Town and, as an incentive, they provide successful investors with bucolic apartments adapted from farmers' houses – for free. To be specific, investors' enterprises, like medical firms, are in the towns' business districts – no factories will be introduced into a village – while their employees can live in a rustic environment.Hou said Xuyao is one of five villages under Chonggu Town to have joined hands in attracting talent from outside. Over time, the settled talent will become constant patrons of Starbucks and other services. In addition to contracting uninhabited farmers' houses from the village and updating them into bucolic apartments, shops or offices, the company Hou works at will also plan to help set up movable tents with glass ceilings for urban visitors to come and enjoy a starry night. To make the village more eco-friendly, Hou said they will install photovoltaic panels on the roofs of all the renovated houses to reduce reliance on fossil energy.According to Xinmin Evening News, Xuyao Village has partnered with a number of businesses, including the one Hou works for, to improve the village's economy."In the Yangtze River Delta region, many people are moving from cities to the countryside, thereby channeling urban consumption to rural areas," said Wen Tiejun, who encouraged a smooth urban-rural flow of sources.This year, Shanghai has decided to throw its weight behind the construction of "five new cities," including Qingpu. As they border Shanghai's city proper on one side and villages on another, these "new cities" will become a bridgehead to connect Shanghai's urban and rural development in no small measure at a time when a further integrated domestic market is called for to boost China's "dual circulation" economy.