Worm hotels, beauty and hope for the future 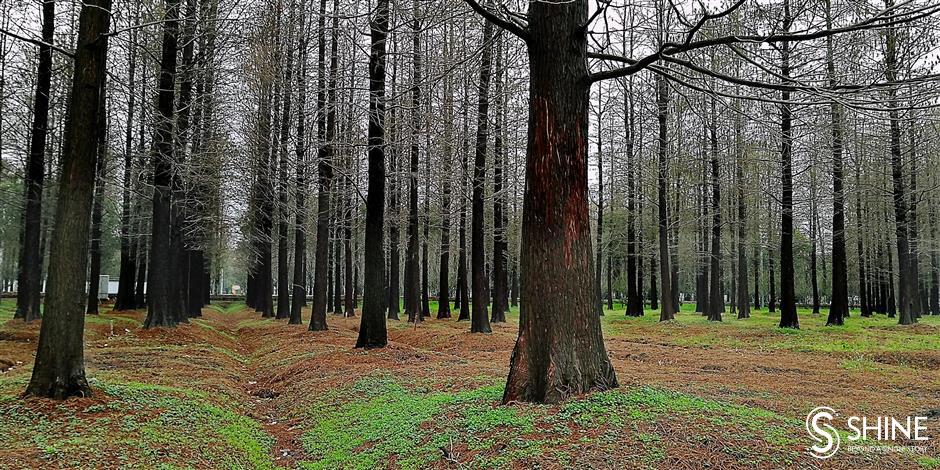 Fir trees stand at the entrance of Zhongbu Village, one of China's most beautiful villages.

“What? A worm hotel? What does that mean?” a friend from Fudan University asked me the other day, referring to a pipe in a picture I showed her. Stuck in the ground, it’s painted with cartoons of smiling creatures and has captions in Chinese and English saying it’s a tower or hotel for earthworms.

“Ah, the secret is in the underground part of the pipe,” I explained. “You throw certain vegetables like cabbage and peel from fruit like bananas into the pipe to attract earthworms, which can come in and out of the pipe through holes in its underground part. The traveling earthworms thus help loosen compacted soil. And you can change the pipe’s position once in a while so that earthworms may improve as much soil as possible.”

“Wow, that's something new for me,” she exclaimed. So is it for me.

A half-built tree house in a small garden in Zhongbu Village. A "worm hotel" can be seen in the garden.

I did not know the purpose of such a pipe when I saw it for the first time in my life during a casual walk in a village near my home in western Shanghai's Qingpu District last week. There were a couple of them, “sprouting” from the earth in a small garden at the entrance to Zhongbu Village. The garden also features a half-built tree house, a clay kitchen and a vegetable corner in the shape of a sliced pizza.

The scene took me by surprise. Over the past few years when I was a regular jogger in the village, there had never been such a garden, not even when I last went about a month ago. In its place there used to be a small metal mill converted from a dilapidated two-story farmer’s house. Piles and piles of iron rods were processed and heaped on the courtyard hardened with asphalt paving. Two little dogs would bark at strangers like me when I entered the village.

As I stood dumbfounded before the little garden, wondering at the “worm hotels” and a wooden platform built around a big tree that may eventually evolve into a tree-house, I thought to myself: What a sea change since my temporary “absence!” 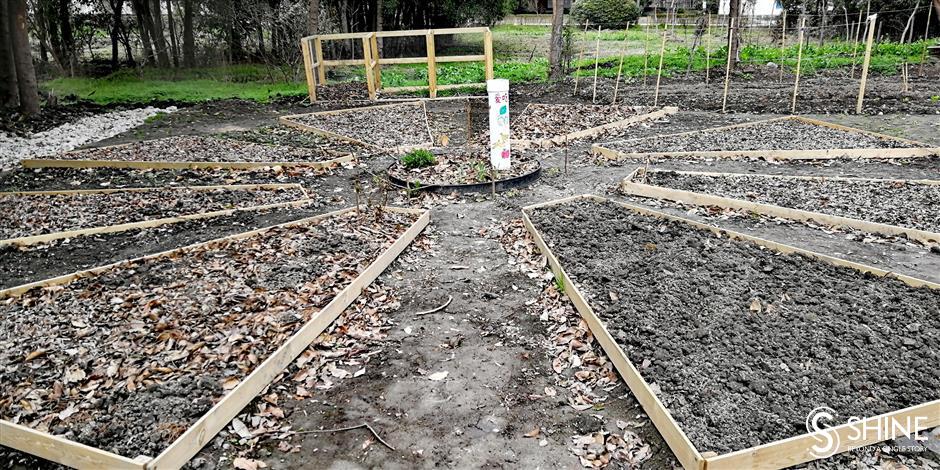 The "pizza garden" where the soil has been improved with layers of organic matter such as fallen leaves.

I went there last week after I read a news report that China had just launched an action plan for 2021-2025 to make the country more beautiful. The plan calls for everyone, including children, to act so that society can improve its overall awareness of nature, especially about biodiversity.

I then decided to go and see if I could do anything for the village, which is about a 15-minute drive from my home. Hence my surprise encounter with the garden. I was so glad that someone had acted already to make Shanghai more beautiful, though I had yet to know who.

As I turned around, I saw a young man tending the frames surrounding a water tank in a corner of the garden. I went forward and struck up a conversation: “Hey, did you build this garden?”

“I’m a volunteer,” he said, putting off his work and facing me with a grin. “Today I’m off duty at work, so I came to help fix some grape vines in the garden.” He did not tell me his exact job except that he works at airports in Hongqiao and Pudong.

As we chatted, his wife and some other friends came. He said they had just returned from a field study of some other parts of the village, which has been elected as one of China’s most beautiful villages for its efforts to spruce up its environment, especially through years of forestation.

Not far from where we stood, new fir trees have been planted over a 15-hectare area bordering Huqingping Highway, part of a national transport artery linking Shanghai all the way to Tibet.

He waved for his wife to join our conversation. I learned from her that she is a founding partner of a family club called Home is Coool (HiC), which has masterminded the construction of the garden that helps bring kids closer to the earth. Like her, most partners are young parents who have had an experience in international study or work. It was from her that I learned everything about how a “worm hotel” works.

“You see those small, separate pieces of land like slices of a pizza?” she asked me. “We’ve tried to improve their soil quality with layers after layers of such organic stuff like fallen leaves.” Then she pointed to a nearby piece of land called “Ah po’s vegetable garden,” whose soil has not been improved.

“But I haven’t seen a child today,” I said, a little perplexed.

“We’ll come back on Sunday with kids, and you’re welcome to join us then,” she assured me. A little girl aged about 4 pours water over little plants.

When I went again on Sunday, I felt it was drizzling and cold. I was afraid no kid might show up. But as I approached the garden, I saw a little girl playing at the clay kitchen at a far end of the garden. When I came closer, I found her jacket stained all over with mud. She was absorbed in tending to a plate of little plants when I asked her: “Are you growing them?”

“Yeah,” she answered slowly, a little watering pot in her hand.

“You can ask your mom to buy a bunch of flowers for you from a supermarket, right?” I asked. “So why bother growing them here?”

After a few seconds of thought, she replied: “Here I can see how they grow from little ones.”

Then she stood up and pointed to the vegetable gardens and asked me: “If you place an order, I can cook a dish for you.”

“How much would you charge for a dish?” I asked.

“Ten yuan,” she said, looking at me sincerely.

Quickly she filled a bowl with tap water and put some fallen flowers into it. She said to me, seriously: “Here you are, a flower soup.”

What a lovely world a kid can lead us into.

That children can grow healthily and humorously in nature is nothing new. What the new garden truly reveals is a village’s readiness to earmark a precious piece of land just for kids. In this sense, kids and the village will grow together. In learning how soil benefits humankind, children will grow to have a more beautiful mind. In giving children free hand to improve its soil, the village will grow to have an ever more beautiful land.

The garden reminds me of a high-profile project launched in 2019, involving more than a hundred children from a number of cities in Jiangsu Province along the Yangtze River. These little “ambassadors” collected samples of air, water and soil along the river in order to study them over time. The project will last until 2030 in line with a United Nations blueprint for sustainable growth.

Children are the hope of the future. They should learn to put their feet on solid soil from day one of their education. As the source of life, soil should not be treated like dirt.

“One tablespoon of fertile soil is thought to contain more life forms, ranging from fungi to bacteria, than there are people on the planet,” said renowned British environmentalist Tony Juniper.

On Sunday, the airport man came again. He said he had just completed a domestic flight and then drove all the way from Pudong to join us. Now I know he is a professional pilot. He would not miss a chance to celebrate a landed life in his spare time.