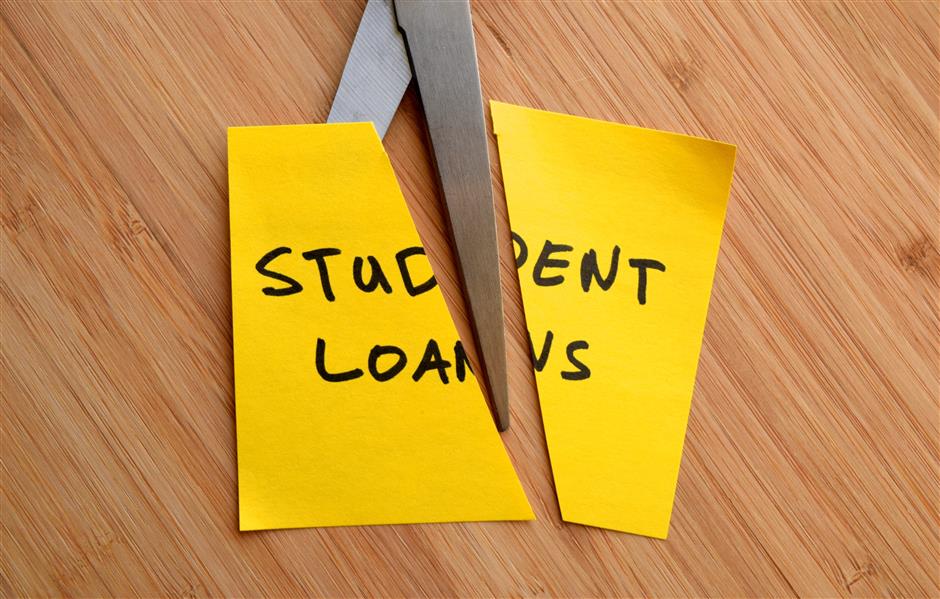 Social media sites are abuzz with comments about the Chinese government’s latest move to curb online loans to university students.

That followed a regulatory crackdown on net student loans deemed to entice students to borrow more than they can afford.

Under the new rules, so-called “microcredit firms” and unlicensed online vendors are banned from extending consumer loans to college students.

Moreover, mainstream financial institutions such as consumer finance companies and commercial banks are required to strengthen their lending risk management, according to a statement from the China Banking and Insurance Regulatory Commission.

China has more than 40 million college students and many have no access to mainstream credit cards, so they turn to online lenders for money.

Allen Wang, a third-year student at Shanghai Lixin University of Accounting and Finance, said it’s high time some thing was done about the student loan realm, which he called a “kind of crime.”

Wang said he has seen too many classmates who have developed irrational spending habits and fallen into crippling debt because of the easy money available online.

These services give consumers generous spending limits and require repayment at a specified date, usually in the following month.

Huabei, which literally means “just spend” in Chinese, was originally created in 2014 as a way for Alipay users to fund purchases on shopping websites like Taobao and Tmall — all run by the giant Alibaba Group.

During the 12 months ended June 2020, Ant Group reported credit balances for about 500 million users, according to documents filed with the Shanghai and Hong Kong stock exchanges.

A typical Huabei customer is young and Internet savvy, with a penchant to spend. Ant describes the service as inclusive, convenient and a help in building a credit history.

Student Wang said most of his classmates have applied for credit via Huabei. He himself was drawn into the service by offers of discounts and interest-free installment payments.

“There is a problem, though,” Wang noted. “Once you have opened an account with Huabei, it’s easy to forget you are spending other people’s money until the bill comes.”

For borrowers who don’t pay up on schedule, online lenders slap on high interest rates and other fees.

Douban, a social networking service, reported that the real annualized rate of interest on the Renrendai loan platform, for example, was 48 percent, and on the Niwodai platform, 76 percent. That’s far above China’s prime loan rate, a benchmark rate for bank lending.

In a group called Union of Debtors on Douban, about 40,000 registered users shared their experience of falling prey to loan sharks. A considerable number were college students.

One graduate surnamed Zhao said she borrowed 10,000 yuan (US$1,536) online for a new iPhone, and then went on to become addicted to easy money. Everything spun out of control until the point where she found she owed a total of 100,000 yuan to several Internet platforms. Collection calls flooded in.

Her family, which was by no means wealthy, repaid the debts by selling a house.

Comparatively, the interest rate on Huabei loans is not high. In the 12 months ended June 30, the daily interest rate for the majority of Huabei users was at or below 0.04 percent, Ant Group reported. However, the online lender reportedly began lowering the credit limits for young borrowers at the end of last year.

Wu Xin, a sophomore at Beijing Information Science and Technology University, recently found that her Huabei account limit was reduced to 2,000 yuan from 2,500 yuan.

“Generally, the limit provides enough money for me, plus the living expenses my parents give to me,” she told Shanghai Daily.

She said she used Huabei mainly to pay for food deliveries, cosmetics and clothes, and she insisted she will make repayments on time every month.

The problem of excessive loans to students has been going on for a long time, with new government measures designed to control it rolled out from time to time over the past few years.

Late last year, national regulators initiated a crackdown on Ant and other online nonbank financial services. Many online lenders have reinvented their images, while others claim that they do not offer student loans.

WeBank, China's first private and digital-only bank, told Shanghai Daily that its loan service Weilidai, which provides small credit loans, hasn’t been available to college students under the age of 23 since its launch in 2015.

Du Xiaoman Financial, a spin-off of Baidu, did not respond to request for comments on its microloan business Umoney.

Registered users aged 18-55 can apply for an account with Umoney with their ID card and bank card, according to information posted on the company’s website.

The web page said that the product was not available to students.

However, it is difficult for online lenders to identity whether applicants are students or not, industry insiders said, noting that scrutiny can be pretty lax.

HomeCredit, a licensed consumer finance firm, said it stopped lending to students as early as 2013 but does find many users concealing their student status.

“In such cases, we investigate further and if we find a borrower is a student, we provide information on how to end the contract,” the company said.

Malpractice, however, still exists in a market so vast and attractive. Many college students aren’t very savvy about finances and are easily lured by predatory lending, said Su Xiaorui, a consumer finance expert.

The new regulations require universities to shoulder the responsibility of promoting financial awareness among students and helping them develop rational spending habits. It also advises university to take initiative in working with banks to help cash-strapped students.

Donghua University and Fudan University in Shanghai have posted articles offering tips for students on how to protect themselves against financial fraud.

Some banks are taking steps to help students, but most remain cautious about full-fledged student lending.

China Guangfa Bank is promoting its “Be Real” credit card, which is exclusive to college students on the WeChat account of Tianjin University of Finance and Economics.

The card charges no annual fees and takes only a five-minute online application. Applicants receive an 80-yuan cashback and if lucky, they may get an internship at the Beijing branch of the bank.

The credit card center of PingAn Bank said it has no cards targeting college students. Post Savings Bank of China once offered loans to MBA students at the University of International Business and Economics.

China Merchants Bank has offered student credit cards since 2015. Students are required to deposit money on the cards before making purchases, but they also get discounts on catering services and movie tickets.

Cards such as Young card, Hello Kitty card, King of Glory card are popular with students, people familiar with the matter said.

When his daughter was still a teenager, Qian said he helped her open a bank account to save her pocket money and taught her good spending habits. Thanks to these efforts, his daughter, at an age of 21 years old, doesn’t spend beyond her means, he said.