Shanghai’s banking industry will assume more important tasks and responsibilities to better serve the city’s financial opening-up and reform over the next five years, local officials have pledged.

Liu Qi, deputy director of the Shanghai office of China Banking and Insurance Regulatory Commission, stressed the commitment of the industry at a recent meeting with an aim to clarify the local banking sector's role during the 14th Five-Year Plan (2021-2025) period.

"We will help strengthen the city’s global resources allocation function as an international financial center by supporting Pudong's high-level reform and opening-up," Liu was quoted as saying via an official press release.

To that end, Shanghai will further improve the cluster of financial institutions, effectively implement the strategy of further opening-up of the financial industry, and achieve new breakthroughs in cross-border finance and yuan internationalization.

Also, Shanghai will deepen its financial reform and innovation by focusing on  major tasks assigned by Chinese President Xi Jinping. These are expanding its free trade zone, setting up a registration system and a new board on its stock exchange, and integrating with regional development.

Banks can make more contributions by supporting the opening and innovation of finance in the Lingang Special Area of the Shanghai FTZ, promoting the orderly flow and optimal allocation of financial resources in the Yangtze River Delta region and accelerating the development of technology finance.

In addition, the banking industry will commit to serving the high-quality development of the real economy over the next five years.

Specifically, more financial support will be lent to strategic emerging industries such as integrated circuits, artificial intelligence, biomedicine, aerospace and high-end manufacturing. More medium and long-term capital will be supplied.

Banks will continuously optimize funding services for small and micro enterprises and guide social funds to invest in green industries such as ecological environment protection, water and energy saving, as well as renewable energy.

The watchdog said it will carry out strict supervision and strive to prevent and resolve financial risks in key institutions, key businesses and key areas.

And banks are ready to provide customized solutions for Shanghai’s further development. 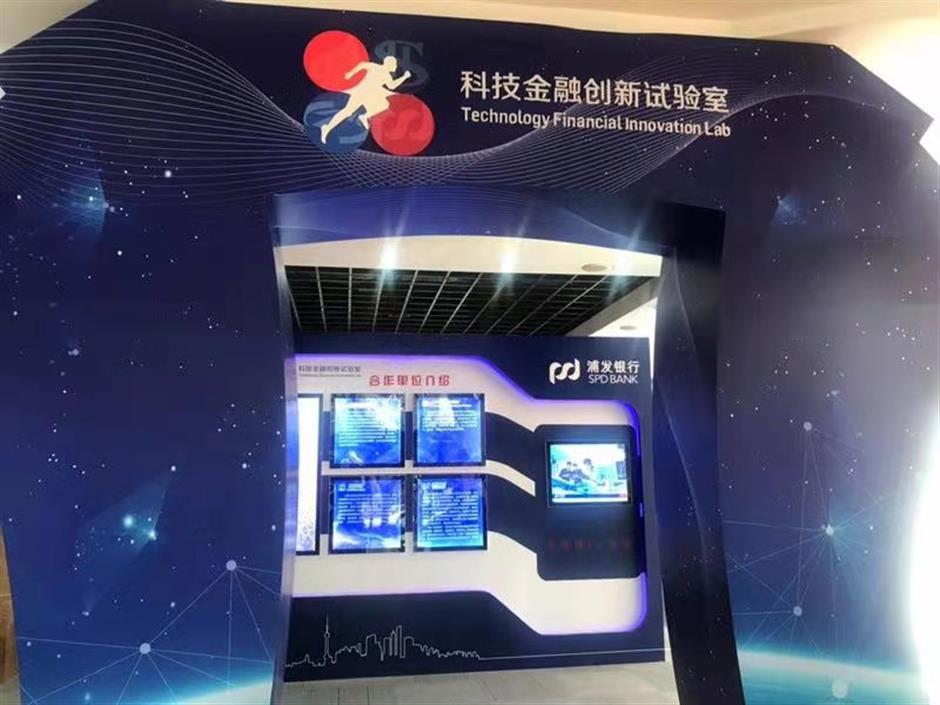 A display of the technology financial innovation lab of Shanghai Pudong Development Bank.

The Shanghai branch of Bank of Communications has said it will vigorously support the construction of five "new cities" in the suburbs, namely Jiading, Qingpu, Songjiang, Fengxian and Nanhui.

To empower the headquarters economy in Shanghai, the branch will provide high-quality financial services for the operation and management needs of institutions in areas of digital trade, cross-border e-commerce, new offshore trade and exhibition.

It will also be dedicated to serving the city’s digital transformation by improving the digital level of financial services, enriching service scenarios, product offerings and optimizing business processes to improve people's livelihood.

The bank is now facilitating citizens’ convenient medical treatment and promoting the integration of technology and finance in payment services.

The Bank of Shanghai said it has made one-on-one comprehensive financial service plans for the five new cities.

At present, the bank has provided credit of 1.3 billion yuan (US$198 million) for landmark projects such as Nine Trees Future Art Center in Fengxian New City. And a total credit of 8 billion yuan has been granted to key enterprises such as Shanghai Harbor City Development (Group) Co in Nanhui New City and Shanghai Lingang New City Investment & Construction Co.

In addition, it will give full play to its advantages in people's livelihood finance and help improve the public services in the five new cities. 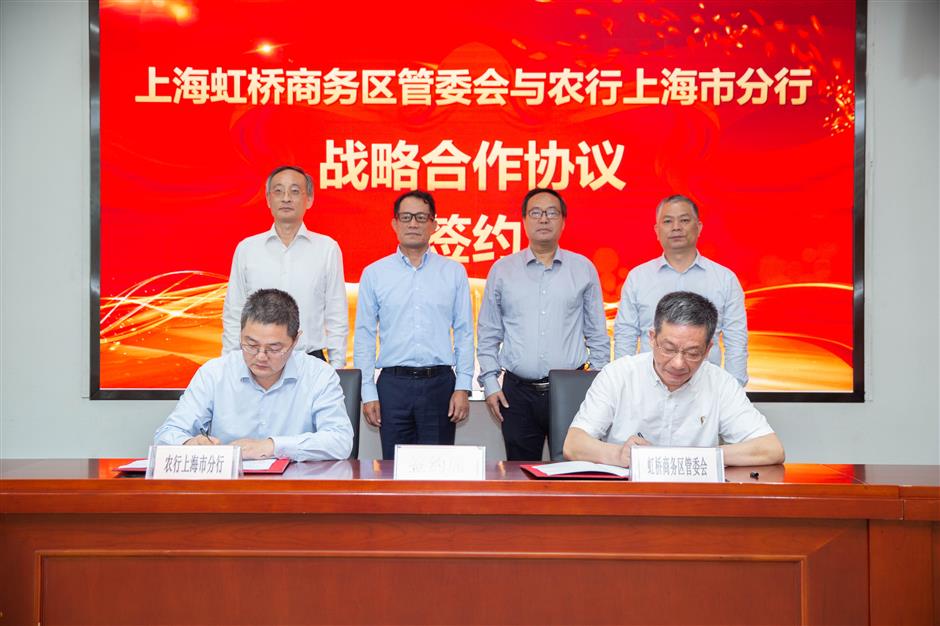 The Shanghai Branch of Agricultural Bank of China signs an agreement with Hongqiao Business District.

With its extensive network, it also aims to support the development of five new cities.

Industrial and Commercial Bank of China’s Shanghai branch is working hard to formulate its action plan and financial solutions to grasp the opportunities of the 14th Five-Year Plan and the 2035 Vision Plan. It is focusing on areas like the city’s international financial center construction, sci-tech innovation, industrial upgrading and digital economy.

The Shanghai branch of Agricultural Bank of China vows to continue its support for the Lingang and Hongqiao Business District.

Citi China said it will continue to expand its local business capabilities, and make more contributions to boosting global investors’ participation in the Chinese market. 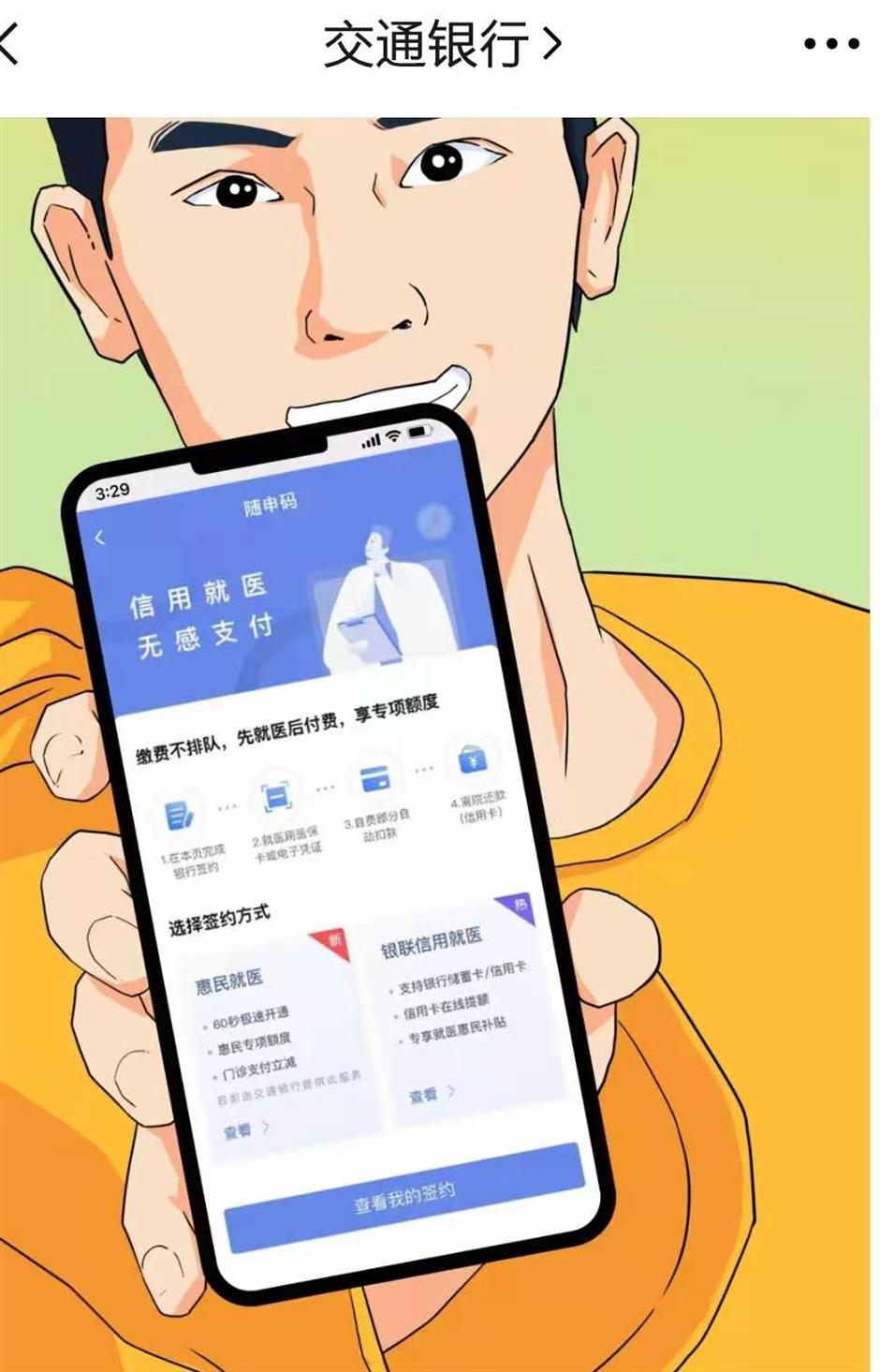