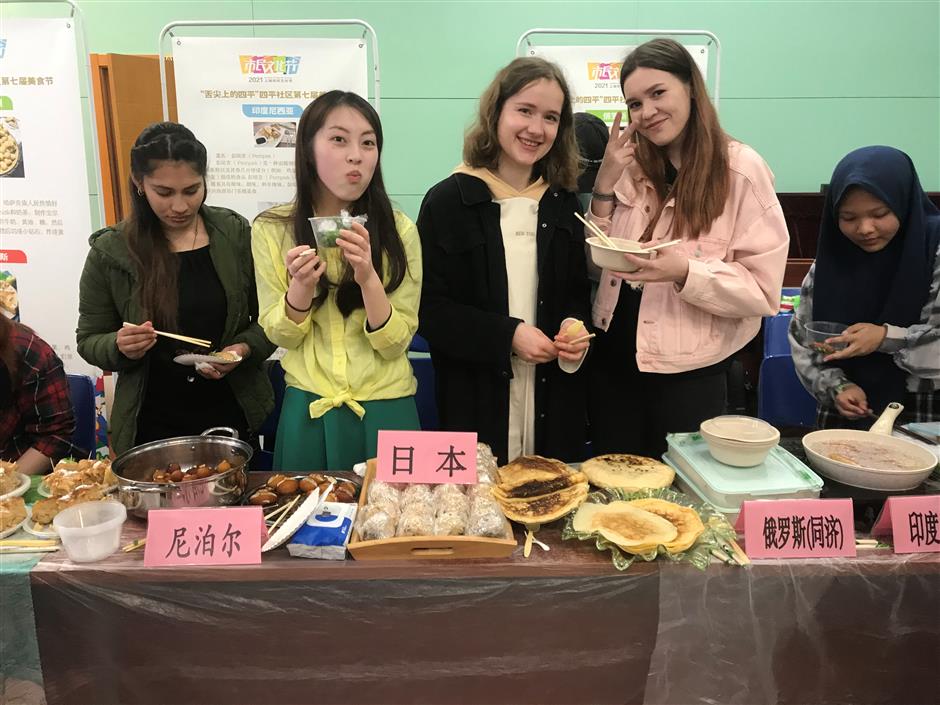 Foreign students from the Shanghai University of Finance and Economics, Tongji University and Shanghai Trade School serve traditional cuisines from their home countries at the food festival in Yangpu’s Siping Subdistrict.

Bota, a student from Kazakhstan who studies at the Shanghai University of Finance and Economics, placed plates of a handmade traditional Kazakh cuisine called baursak, a type of fried dough often served with tea on special occasions like birthday and wedding, during a food festival held in Siping Subdistrict in Yangpu District on the opening day of the Shanghai Citizens Art Festival.

On March 28, the annual art festival kicked off both online and offline around the city for the first time. This year's launch event featured cultural and tourism activities along the five lakes in the five "new cities" of Shanghai's outlying areas. They are Yuanxiang Lake in Jiading, Fulin Lake in Songjiang, Xiayang Lake in Qingpu, Jinhai Lake in Fengxian and Dishui Lake in Nanhui.

This year marks the seventh food festival in Siping with catering enterprises, restaurants, foreign students and representatives from neighborhood committees in the subdistrict exhibiting their specialty cuisines and the culture behind them.

Bota and other foreign students, from Russia, Japan, Indonesia, Turkmenistan, Kazakhstan, Brazil, Mongolia and Bangladesh — who are studying at the Shanghai University of Finance and Economics, Tongji University and the Shanghai Trade School — brought traditional food from their home countries to the festival. 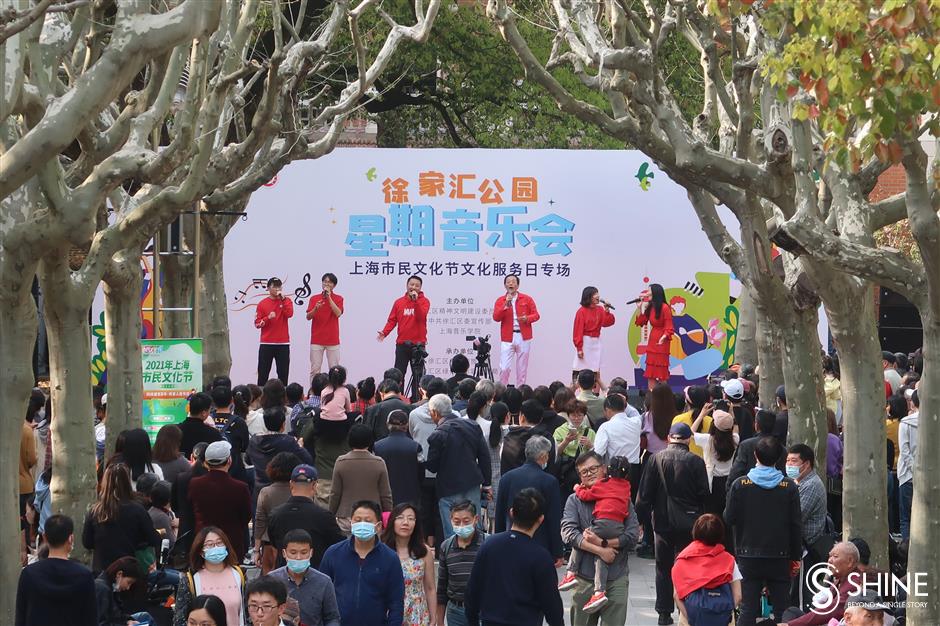 A concert is held in Xujiahui Park as part of the Shanghai Citizens Art Festival in Xuhui District.

An Indonesian student fried food on site. She stayed up late on previous night to prepare all the ingredients to ensure visitors would have fresh food to eat.

"It enables visitors to taste cuisines that are the same in my motherland," she said.

Next to her, Russian student Yulia served sharlotka, a classic Russian sponge cake filled with apples, eggs, sugar and flour.

A Mongolian student served a savory crescent-shaped Mongolian pastry called khuushuur which is deep-fried and filled with a mixture of meat and vegetables.

"It's a bit like a Chinese fried meat pie but the way it's made is different," said the young woman dressed in a traditional Mongolian costume with exotic accessories. 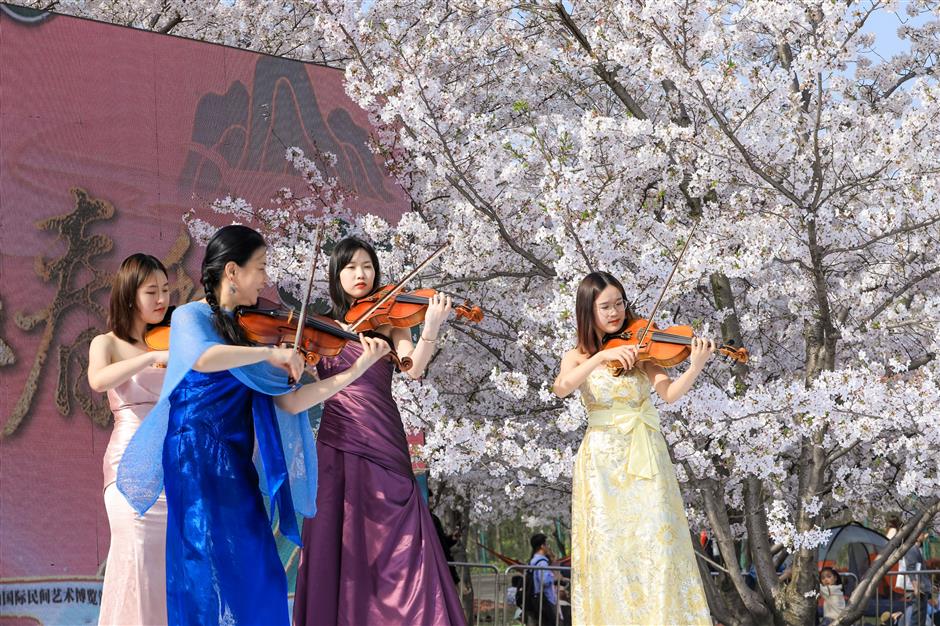 Violinists play at a cherry blossom-themed event at Gucun Park in Baoshan District.

At the same time, Xuhui District, which is one of the centers of Shanghai culture and history, held cultural events focused on specific groups of people, including women and the visually impaired.

The Xuhui District Library and Wukang Road Tourist Information Center transformed texts about history in paper books into audio stories, and used music for the visually impaired along a route designed for them to take a trip.

In the Poly Sunny Walk commercial cluster on the Xuhui waterfront, a cultural movie event geared toward women — "Women Power” — was held with works delivering the female spirit in the new era, including "Leap," a biographical sports film about the Chinese national women's volleyball team, and "My Memories of Old Beijing" about a girl's experiences in Beijing in the late 1900s. 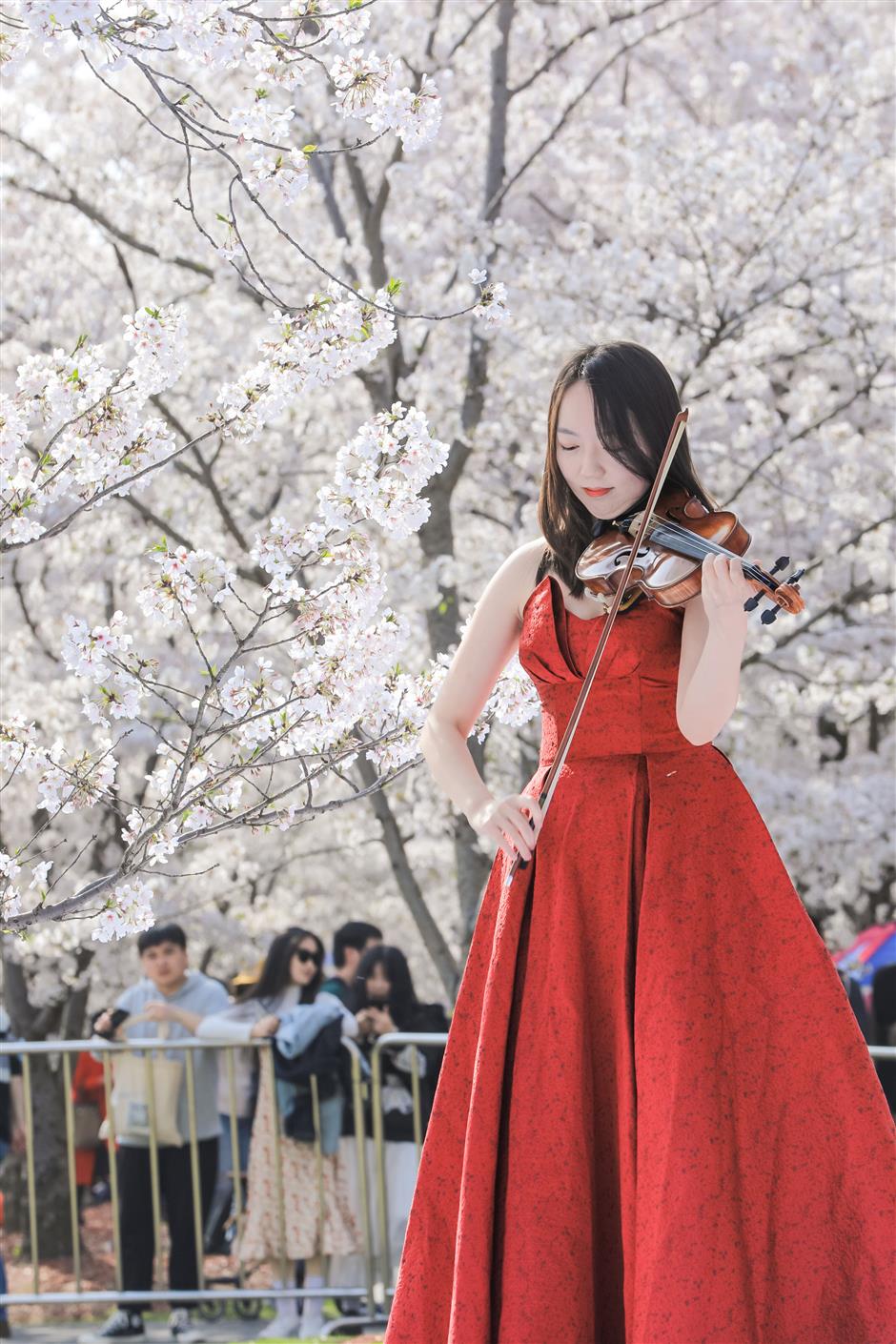 A violinist in Gucun Park

On March 28, the five "new cities" released their list of events during the citizens art festival featuring five "routes of discovery."

The route in Jiading started at the Shanghai Poly Grand Theater with a pingtan play, a traditional form of musical performance that originated in Suzhou and is also popular in Zhejiang and Shanghai. People visited Jiading's library, cultural centers, parks and historic structures along the route to learn more about the district. 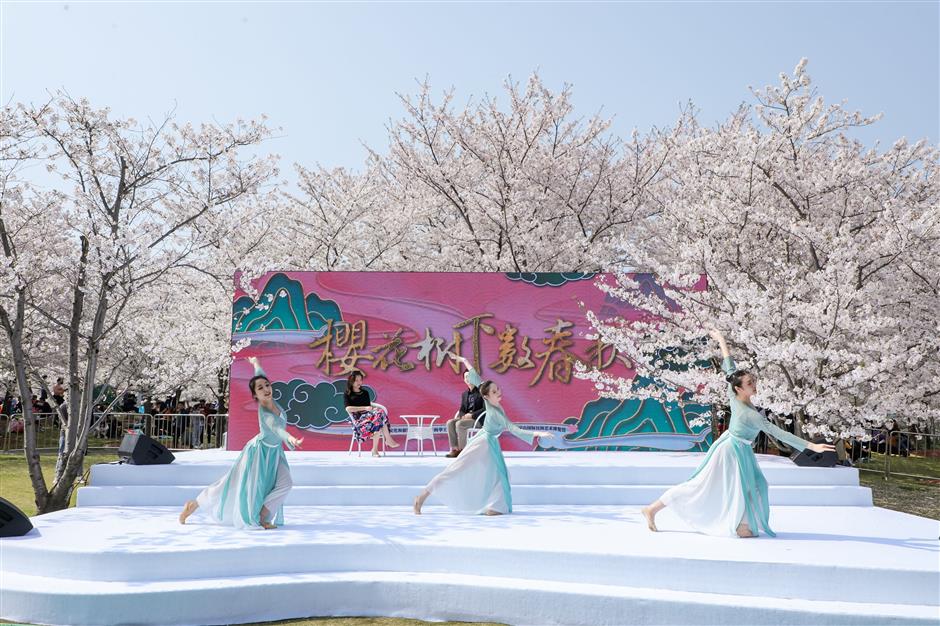 Songjiang's route featured Guangfulin culture. Guangfulin is an important archeological site in Songjiang estimated to be more than 5,000 years old and considered the "root" of Shanghai.

The route in Qingpu focused on Songze culture, which is even older than Guangfulin, while Fengxian's route laid more emphasis on art.

This year, all five "new cities" will accelerate their major cultural and tourism projects, such as the construction of cultural facilities like libraries, cultural centers and theaters. They will also help seniors learn to use digital tools to adapt to the new era, and hold cultural events in industrial parks, military installations, communities and villages.

Additionally, a citywide campaign — "Stories of Shanghai Architecture" — was launched to encourage people to visit historical buildings in the city, take pictures of them and learn their stories.

Some of the cultural events underway

Several cultural events and contests of the Shanghai Citizens Art Festival are now going on across the city.

A citywide "micro tour" project is being launched to encourage people to go out and explore the charm of the city.

Sixteen routes covering culture, history, "red tourism," food, architecture, folk art have been designed with 30 spots set in different districts for participants to get a stamp.

Sign up for this event on www.youxiake.com or via Youxiake app or WeChat mini program, and you will receive a booklet for stamp collection. The participant can win a special gift after collecting five different stamps; only 300 gifts are available.

Traveling along these routes, residents can learn about old Shanghai stories and appreciate the city's rapid development by visiting high-rises along the Huangpu River, wandering along the Suzhou Creek and enjoying spring scenery at countryside parks.

To promote the art of a cappella, a kind of music performance without instrumental accompaniment, the culture and tourism authority in Xuhui District is joining forces with Shanghai Mass Art Center to host an a cappella competition.

A cappella groups with four to 16 members can sign up by filling an application form downloaded from Vocal Asia's official website (www.vocalasia.com) and send it to the organizer's e-mail box (info@acacenter.com) before April 23 with a brief introduction of the group, the scores (in pdf format) of two songs for the contest and recent video and photo. The audition will be held in June.

A dance contest will take place in Changning District. Dancers can sign up for three categories — line dance, modern dance or other dances.

The application for line dance will end on April 30, while the registration for the other two categories will last through July 20.

Download an application form from Shanghai Citizens Art Festival official website (http://smwhj.eastday.com), fill it and send together with two group photos and a video of the dance for the contest to the organizer's e-mail box (yishuzhidaobu@126.com).