My husband and I want to buy an apartment in Shanghai, but we don’t want to fall prey to the trap where homebuyers pay a lot extra to locate in a favorable school district.

We are renters with a 2-year-old son who will start kindergarten next year. Yes, good schools are important to us, but so are factors like a green environment and easy access to transport.

But for many parents, the one and only factor in deciding where to live are school intake boundaries that determine where a child is enrolled.

Sought-after addresses for so-called “school district houses” are not only very expensive but often quite shabby. The sole attraction is location.

For example, a neighborhood called Tongji Xincun, built in the early 1990s in Yangpu District, gives homeowners access to Tongji Primary School, which is considered a prime quality school. Prices for its old houses average 117,000 yuan (US$17,804) per square meter, 30,000 yuan higher than houses just outside the intake boundary.

The Tongji Xincun houses are small, with average floor sizes of between 30 and 60 square meters — quite a squeeze for a family with children.

People who buy these homes aren’t pursuing a good living environment, with surrounding greenery and rooms that let in sunshine. For them, the most important thing is their children’s education.

My husband and I decided to have a look at houses in the Tongji area after hearing rumors that prices might fall after the Shanghai government stipulated that all top public high schools in Shanghai must base enrollment on student numbers of each of the city districts. That, in my opinion, would guarantee equal access to the best high schools for every middle school student.

Despite the new city directive, we found that prices of “school district houses” haven’t budged much yet. Demand for them remains high.

Prices for old houses in the area still hover over 150,000 yuan per square meter, even though they did drop 1.6 percent in recent weeks.

“Last year, some school district houses' prices surged 50 to 80 percent due to speculation,” said Yang Xuhong, vice director of EJ Real Estate Research and Development Institute. “But I think those prices may eventually be affected by the new rule.” 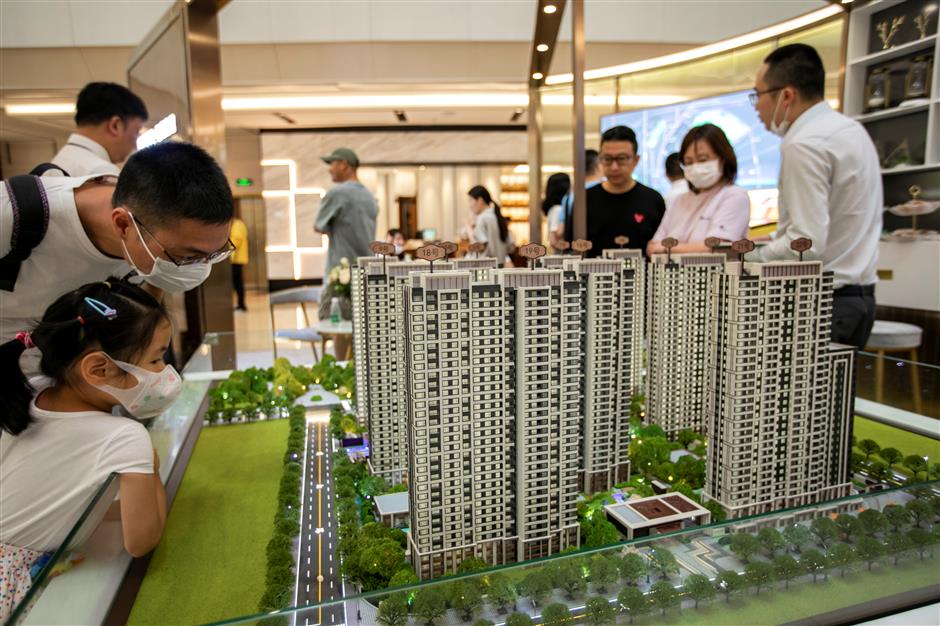 A Shanghai citizen is watching the sand table of a new housing project.

For education-obsessed parents, schooling is considered a driving factor in the future success of their children.

City education authorities have been trying for years to reduce the compulsive behavior that often results from this fixation, like currying favor with teachers with gifts and paying for extracurricular tutoring to make children more academically competitive.

The problem of parents choosing where to live based on school boundaries has been harder to crack.

Hou Wan, 32, a researcher at Fudan University, wants to buy a home in a quality school district because her 2-year-old son is entering kindergarten next year, and a good kindergarten is considered the first rung on the ladder to education and career success.

“To get enrolled at the kindergarten or primary schools affiliated to Fudan, we have to meet two requirements,” she said. “First, our child’s residence needs to be in the Wujiaochang area, and secondly, you have to be a staff member of the university.”

She said her son’s registration is not in Wujiaochang, so she needs to find a home in that area.

“I regret that I didn’t wait a year longer to have a baby,” Hou said. “That way, after I started working at Fudan, he could have shared my registration. But when I gave birth to him, I was only a doctoral student there.”

Hou said she may have to buy a small apartment with the right address because her home-buying budget is less than 3 million yuan.

“I am willing to buy a house with only one room if it’s located in Wujiaochang,” said Hou, who is currently living with her son, husband and mother-in-law. “We can always rent it out and get a bigger house to live in. Compared with my son’s education, I can abide with any inconveniences.”

Hou is certainly not alone in this house-hunting conundrum.

Zhang Lei, 28, is an administrative staffer at Fudan University. Her daughter’s registration is in Wujiaochang because she gave birth to the baby after she had worked for the university for one year. That means her daughter shares the registration address provided to staff.

Thus, Zhang’s daughter has access to schools affiliated to Fudan even if her parents don’t have a home in Wujiaochang.

With worries about her daughter’s residency alleviated, Zhang and her husband bought a house in suburban Jinshan District, far from downtown. House prices there are less than 20,000 yuan per square meter. But the home is so far from workplace and schools that the family is at a disadvantage.

“We know that for the next few decades, we will have to rent another house closer to Fudan,” Zhang said. “Life is not easy for us, but we want to stay in Shanghai for the child’s education.”

Zhang said when she graduated from the School of Mathematical Sciences at Peking University in 2017, there were many job opportunities open to her, even with more attractive salaries than how much she earns at Fudan.

“I chose to work at Fudan because of the better education opportunities available here,” she said. “I don’t regret the decision.”

Last year, a new housing project became so far the most expensive per square meter in Baoshan District. Developed by Shanghai International Port (Group) Co and sold more than 70,000 yuan per square meter, it still attracted a lot of homebuyers because of its proximity to Yangpu District, where Fudan’s campus is located.

The biggest advantage of the project is its closeness to the Second School Affiliated to Fudan University, and even more than 100 of the 661 homebuyers there are staff at Fudan University, mainly for the convenience to go to school.

My husband and I haven’t found the home of our dream yet, but we will keep looking, primarily in Jiading and Pudong districts. And if we find one we can afford that happens to be in the intake boundary of a good primary school, so much the better!