Fighting poverty with the tools of perseverance and creative ideas 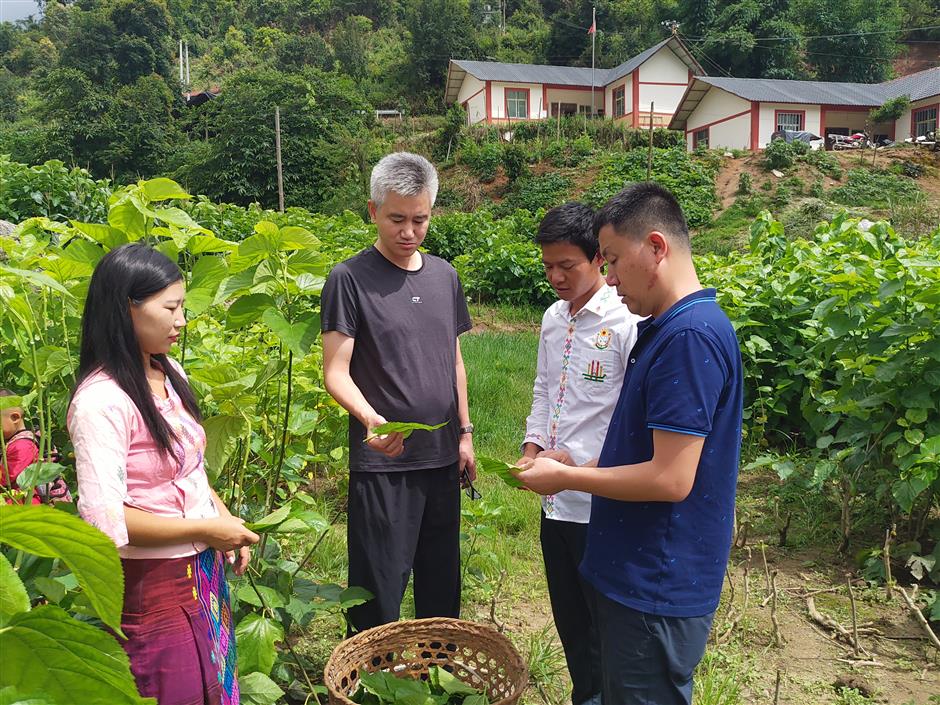 Huai Xiangjun, a 48-year-old agricultural expert from Shanghai's suburban Qingpu District, spent the past three years in the hinterland of Yunnan Province, helping locals lift themselves out of poverty. He met the challenge with some creative thinking.

Since 2018, Huai and nine others from Qingpu have been sent to Dehong Dai and Jingpo Autonomous Prefecture, a backward area paired with the district in the nation’s anti-poverty program.

The two cities and three counties under the Yunnan jurisdiction have now been removed from China’s list of impoverished areas. Per-capital income has risen from 2,300 yuan (US$351) in 2018 to above 4,000 yuan last year.

How was it done? For one thing, with wild rice shoots.

The shoots, called jiaobai, grow prolifically in Liantang, a watertown in Qingpu. Annual yields are around 52,000 tons.

The grass is not grown for its grain, like other wild rice species, but rather for its swollen root, which is popular for its flavor and tender texture. It stays crisp when stir-fried.

When Huai initially surveyed the farmland of Dehong, he found crops of poor quality, low yields, pest and disease infection, and bland taste.

"The idea of trying the Liantang species there struck me in a sudden like a flash," he said.

The year-round warm climate in Yunnan provided an excellent growing environment when two varieties of Liantang jiaobai varieties were trialed in Dehong. The results far exceeded Huai’s expectations. Yields were a third higher than that in Qingpu and the harvest season was four times longer. 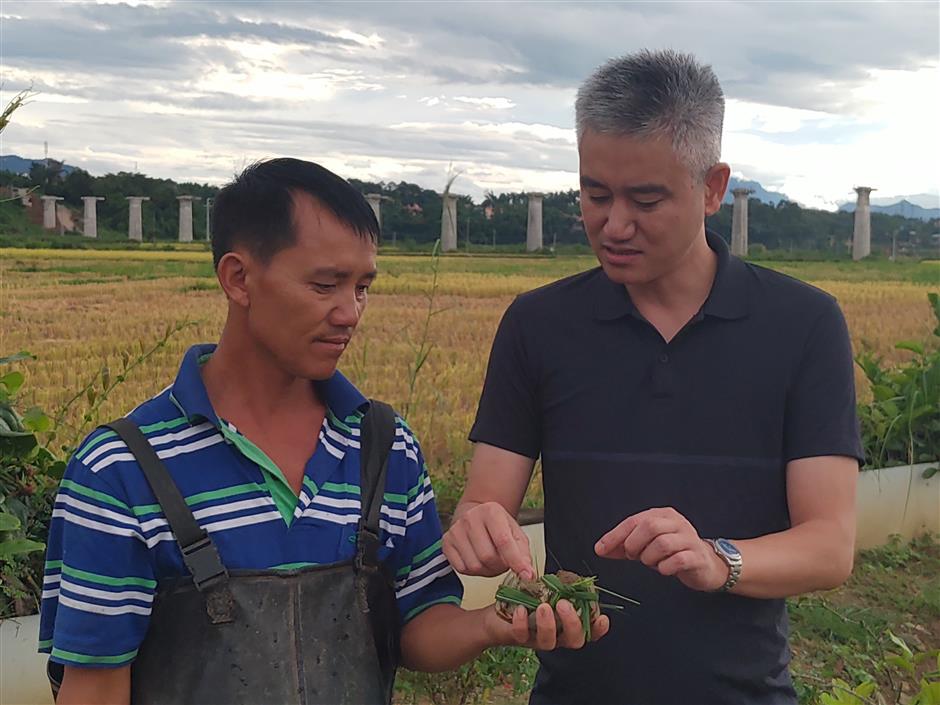 Successful cultivation is just the first step. Products need to find markets. There, too, Huai came up with some creative thinking.

"If we took advantage of the longer picking period and supplied jiaobai to Shanghai markets when the harvest season in the city had ended, it would create a good economic outcome for Dehong farmers and would enrich the food basket of Shanghai residents," he said.

During the Chinese Lunar New Year last year, jiaobai grown in Dehong was hauled to the city by freight trucks traveling the 3,000-kilometer distance in two days and one night. Each truck carried more than 30 tons of the vegetable, helping cut transportation costs.

The wild rice shoots were delivered to the Xijiao Agricultural Produce Market in Qingpu, which opened a green channel for vegetables from Dehong and provided storage and rent-free market stalls.

The jiaobai proved to be a success in the market, as consumers flocked to buy the shoots.

"They were highly praised by Shanghai residents for their taste and quality,” Huai said.

More than 133 hectares of jiaobai are now under cultivation in Dehong, and farmers’ incomes have tripled.

Vegetable cultivation in Dehong has been expanded to include more crops for the welcoming market in Shanghai. 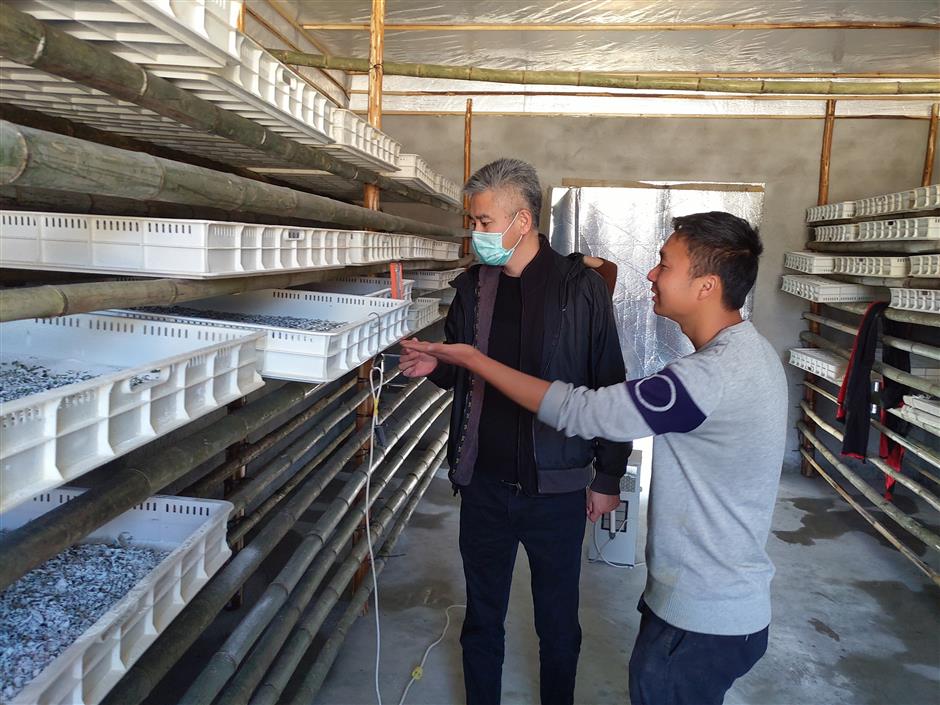 Huai, who was director of a fishery station in Qingpu for 10 years, also introduced Chinese mitten crabs to Dehong aquaculture.

"The crabs they had been raising were small because of old-fashioned aquaculture methods,” he said. “And local farmers lacked marketing experience, so they sold their crabs too early in the autumn.”

The prefecture is blessed with good water and ideal climate conditions to farm the crustaceans. Huai just provided a modern, scientific approach by introducing white shrimp and loach, a freshwater fish, to the crab ponds.

"The key lies in the adjustment of the water environment, which depends on the right mix of water weeds, biological agents and pH index,” he said. “Controlling the density of crabs and the gender ratio is also important. It’s not scientific to cram the ponds with as many crab seeds as you can, which is what local farmers were doing."

Under his guidance, the weight of local crabs was increased significantly, reaching over a third of kilogram each – much bigger and tastier than those raised in Shanghai. The crabs have proven very popular.

Harvest of loach yielded 53 kilograms per 666 square meters of paddies. They sold at 120 yuan per kilogram. White shrimp, on the same area of land, yielded an average 150 kilograms.

Last year, the yield, size and quality of crab, shrimp and loach grown in the prefecture were the best in history.

Huai is pretty humble about all the achievements.

"I just applied my years of experience, research and experimentation," he said.

Huai said he has vivid memories of his time in Dehong.

"When I first arrived there, the mountainous roads were dirty, bumpy and muddy, and the houses suffered from poor sanitation," he said. “Country roads were pitch black at night, and residents had no access to the Internet.
It took at least 90 minutes to drive from the county seat to villages where Huai worked.

"Rainy season is dangerous for travel due to the risk of landslides, and the season lasts six months," he said. "It was very cold at night in the mountains, and we needed fires to keep warm because there was no other heating.”

The somewhat bleak conditions that greeted him have all changed since he began work there. Houses have been modernized, roads cemented and solar-powered lamps installed. Wi-Fi has come to farm villages, and the power supply is now stable. 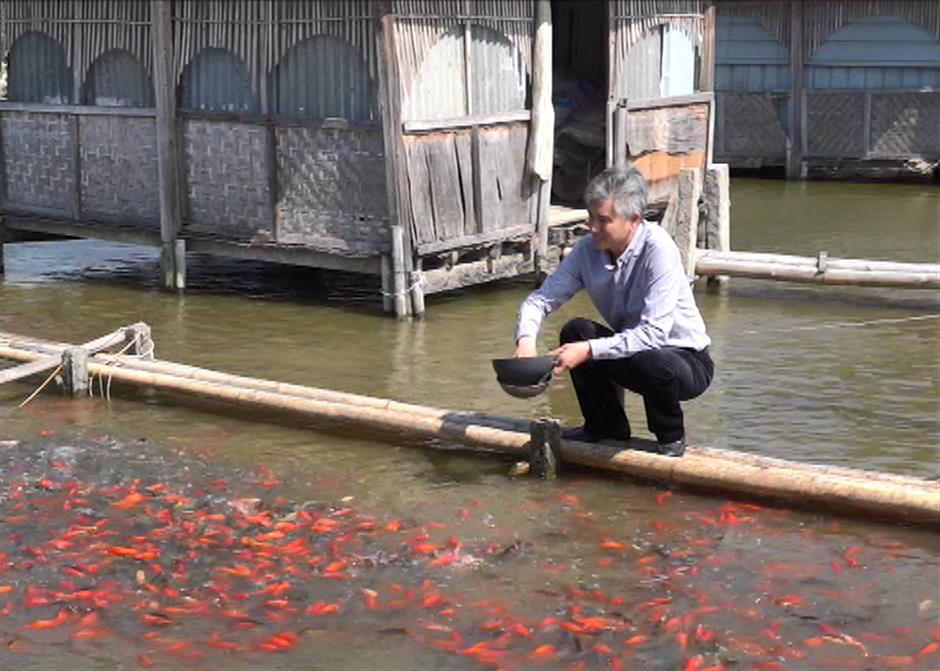 Huai worked from 8am until dark. He had no weekends or holidays off, except for the Lunar New Year, when he returned to his family in Shanghai.

At first, it was hard to motivate farmers who came from households where drug and alcohol abuse was common.

"They didn’t want to work hard, and they sold the pigs and chicken we provided them for farming to buy alcohol," Huai said. “The tough, shabby conditions didn’t bother me so much, but I felt great pressure to succeed. We had no blueprint of how to address poverty, so we played it by ear, step by step.”

Indeed, there were rough spots.

During 2019 Spring Festival, the first load of vegetables from the prefecture to arrive in Shanghai carried more than 30 tons of peppers.

"They suffered poor sales," Huai said. "Shanghainese don't like chilli peppers that much, and the city was virtually empty because of the festival holiday.”

Infrastructure to support local agriculture is underway in Dehong. Qingpu District authorities have built two plants there to process agricultural products such as fungi and mulberry leaves. An agricultural industry park provides logistical services for crops such as jiaobai, corn, potatoes and broccoli.

"It delayed the construction of many projects, such as the fungi and tea processing factories, and the coronavirus epidemic worsened the situation," Huai said.

But he and his team never gave up.

To further expand the sales channel of agricultural products from Dehong, a sales center has been established in the ancient Qingpu watertown of Zhujiajiao. It sells coffee, vegetables, tea, rice, honey, fruits and vegetable oil from Dehong.

"Local farmers in Dehong are really happy and excited about all the changes that have come with higher crop yields,” he said. “They now have good houses, good medical treatment and stable incomes.”

"Local pork and beef will be supplied to Shanghai with slaughtering house under construction," said Huai.

Huai said he will keep following the development of Dehong even when he is back in Shanghai. It’s become a personal commitment.

The Dehong project has been listed as an exemplary example of poverty-fighting projects undertaken by Shanghai in 2020.

Jian Renhui, a Qingpu official, said the program has been successful because it matches manpower with the specific needs of a poverty pocket.

The experts sent to Denhong, he said, “have a practical work attitude and are down-to-earth."