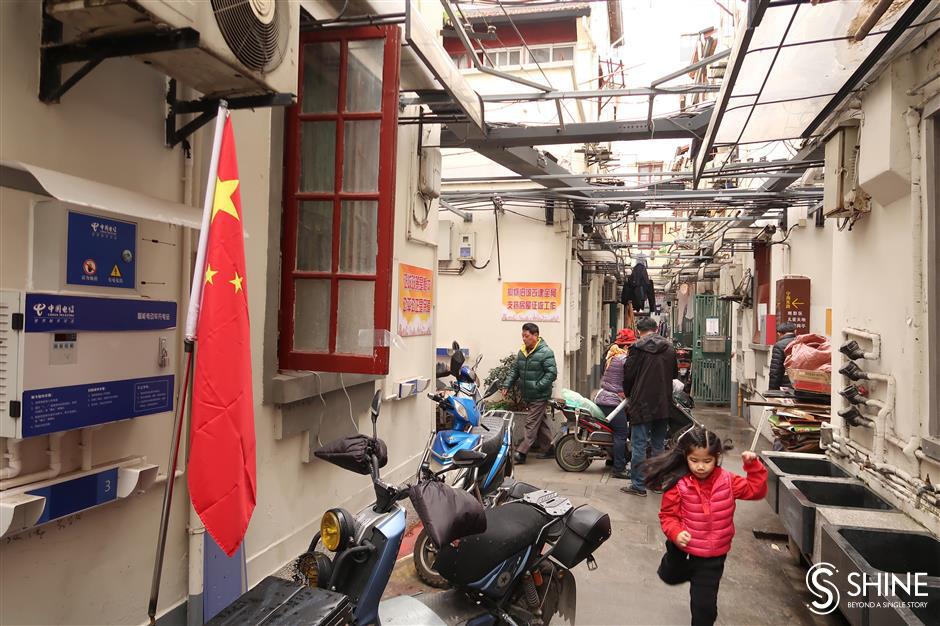 The Baoxingli neighborhood in 2019 before the relocation campaign was launched.

The living space of a local retiree Ni Longkou has been enlarged 13 times within a year thanks to a massive relocation campaign in downtown Huangpu District.

Despite the city’s soaring housing prices, 70-year-old Ni and her husband have moved to a 115-square-meter duplex in Baoshan’s Meilan Lake from an 8.8-square-meter garret in Huangpu’s Baoxingli neighborhood with compensation from the government.

“Without the relocation campaign, I would never have been able to live in such a large apartment with my limited pension,” Ni said.

In the 1980s, most Shanghai residents lived in cramped quarters provided by their employers. Life was described as “rites within a snail’s shell” because the average per-capita living space was just 4.5 square meters, among the lowest in China.

Most people have moved into modern highrises amid rapid urban development but some still live in old neighborhoods built about 50 years ago and have to use chamber pots.

The city’s ongoing Jiugai campaign, or renovation of old residential communities, has become the main solution to improve living conditions, remove shantytowns and redevelop the region to cap the city’s economic growth.

The campaign has been deemed the “most challenging” community task, because government compensation must satisfy every resident and encourage them to sign up for relocation. 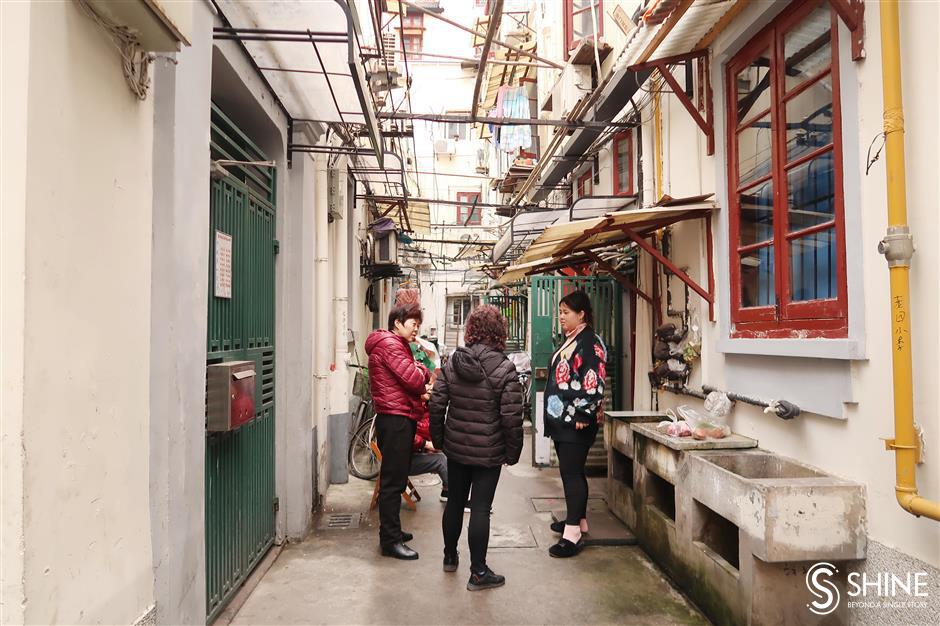 Residents find time for a chat in the Baoxingli neighborhood before the relocation.

Huangpu has the largest remaining area of decrepit lane-style neighborhoods covering some 2 million square meters. They feature cramped living space and shared bathrooms and kitchens. Most of the neighborhoods are within the downtown historical conservation zone, featuring the city’s unique shikumen, or stone-gate, houses as well as traditional lane-style houses under protective status.

The district government has worked out the most effective methods to satisfy inhabitants and make the relocation process go smoothly. After the residents move out, their former houses will be preserved and renovated.

“The Jiugai campaign is related to the vital interests of the people and the most important wellbeing in Huangpu,” said Shen Shanzhou, the district’s director.

“The campaign is also decisive to Huangpu’s future development, so we must gather all the power of the district to complete the mission.”

Huangpu aims to relocate another more than 20,000 households this year while protecting the historical downtown area.

The district government plans to finish renovating all level-2 lane-style houses, or those in the worst condition without private toilets or kitchens, by the end of 2022. 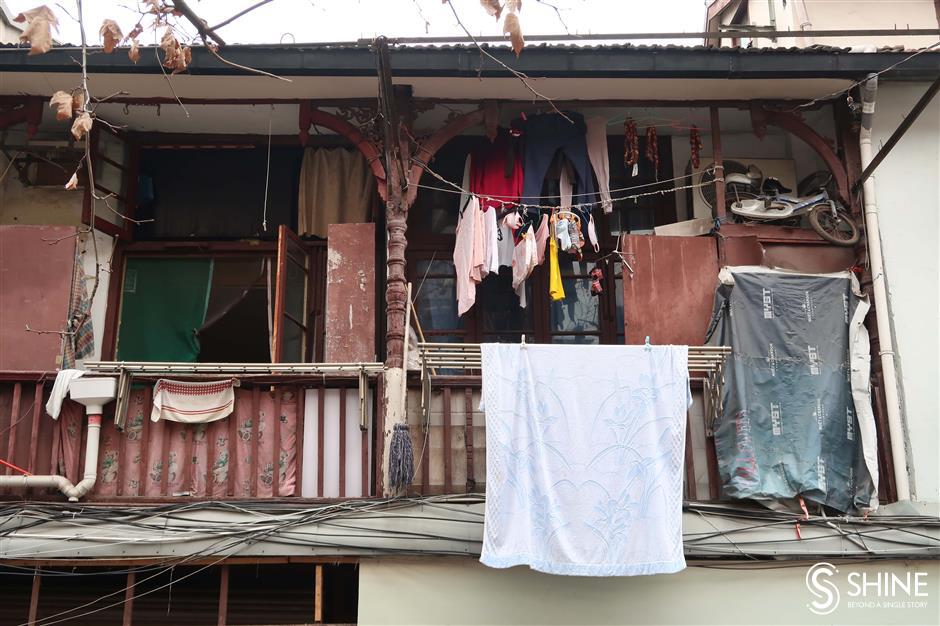 An old apartment in the Qiaojia Road neighborhood.

The focus will on the major regions around Beijing, Nanjing and Nansuzhou roads, where most of the houses in poor condition are, said Hong Jiliang, Huangpu’s deputy director.

Most of the vacated houses will be preserved, especially those in the Bund, Xintiandi, north Huangpu and the Suzhou Creek riverside.

Two historical buildings, for instance, have been moved to new sites and will open to the public with exhibitions inside. They were once the Party school of the Communist Party of China’s Shanghai Committee and the publishing house for the first Chinese version of The Communist Manifesto.

“Our principle is to relocate bravely, protect the building attentively and make the planning carefully,” Shen said.

The Baoxingli neighborhood, built in 1916, has recently become a demonstration area for the city’s relocation and urban renewal campaigns.

It is about 10 minutes’ walk to both the Bund and the Nanjing Road Pedestrian Mall.

Last year, all the around 2,000 households of residents and companies signed relocation agreements.

They had a choice of moving to designated housing on the outskirts of the city such as Songjiang, Qingpu districts or remote towns in the Pudong New Area, or to purchase properties of their own with subsidies from the government. Ni's family, for example, received over 3 million yuan (US$458,716).

Residents move out from the Zhonghuali Neighborhood in downtown Huangpu District.

The Waitan, or Bund Subdistrict, established a team of lawyers to serve residents and guarantee their legal rights, which proved an effective measure and popular service, according to Ding Qining, Party secretary of the subdistrict.

The lawyers explain the law and government policies to residents as well as investigating and figuring out ownership of some houses claimed by multiple family members.

Some residents were reluctant to leave the central downtown neighborhood at first.

Li Lixia, 65, who was born in the downtown area, said she would rather stay than to move to the remote outskirts.

"It is my habit to take a walk along Nanjing Road E. after dinner," Li said. "Where else can I enjoy such convenience?"

Li's 30-square-meter is on three floors. The first floor has a shower room and toilet. The upper floors are living and bed rooms. A table sits in the corridor.

"I will definitely miss my life here after moving elsewhere, no matter how luxurious the new apartment turns out to be," Li said.

However, she still signed up after hearing from the lawyers and volunteers, many of whom were her former neighbors. 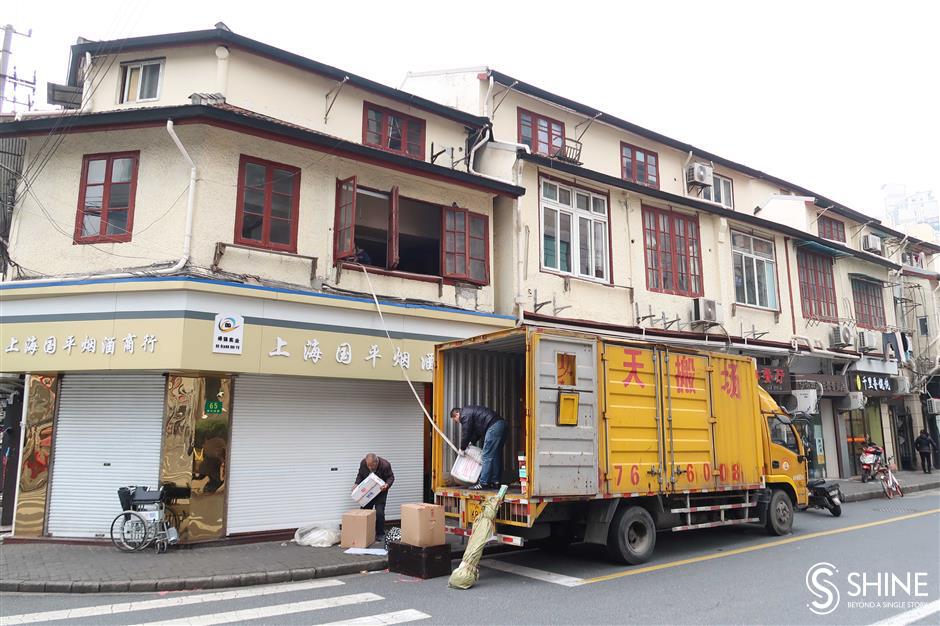 A relocation truck being loaded in the Baoxingli neighborhood.

The Baoxingli community has concluded 10 measures that helped to progress the relocation campaign, including visiting residents more frequently, communicating with them and asking Party members to take the lead. These measures have been promoted across Huangpu and Shanghai.

The district government has also been cooperating with state-owned enterprises to accelerate urban renovation projects.

For example, Huangpu has worked with the Shanghai Land (Group) Co to relocate some 12,000 residents from dilapidated apartments in the Qiaojia Road neighborhood.

Qiaojia Road is a small street in the city’s old town, once the center of Shanghai, which covers 2 square kilometers. The road stretches for less than one kilometer. It was where Xu Guangqi (1562-1633), a scholar-bureaucrat of the Ming Dynasty, was born. His former residence is still in existence.

Painter Wang Yiting’s former residence is also on Qiaojia Road. In 1922, Wang welcomed Albert Einstein and his wife to the house.

“I’m happy to replace a chamber pot with a flushing toilet, but I’ll miss the convenient central location,” said Qiu Xianjun, 40. Huangpu aims to have chamber pots eliminated from downtown by 2025.

Shen said the cooperation will be extended to district-level SOEs in 2021, such as the Yongye Group, Bund Investment Group and Gold Bund Group. “Such cooperation can not only drive the process of the renovation campaign, but also benefit the companies’ future development,” Shen said. 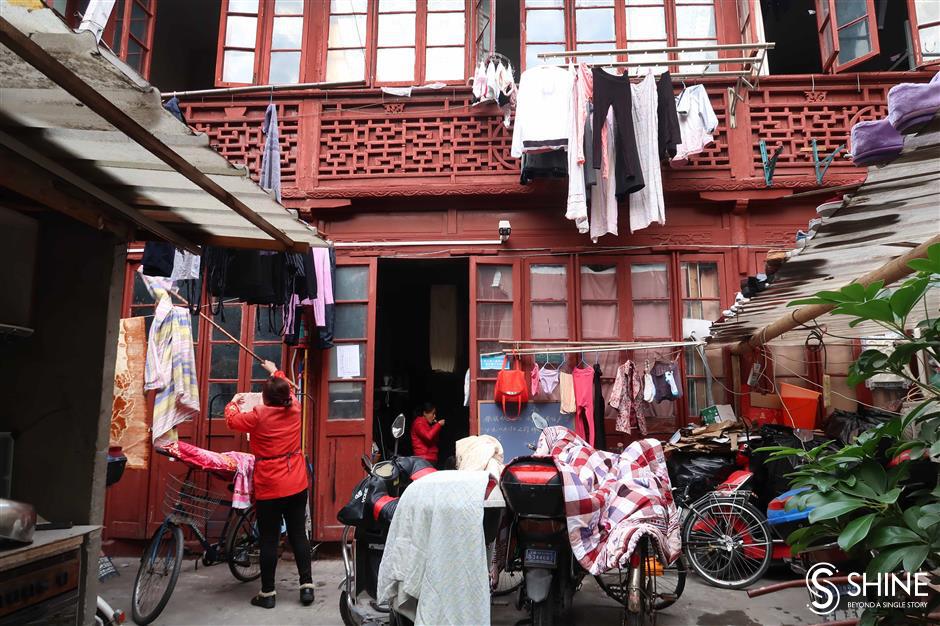 An old residential compound in the Qiaojia Road neighborhood. The residents in the area have been relocated.

Apart from the relocation campaign, the lane-style neighborhoods with their traditional lifestyles are being preserved and renovated.

A trial in Chengxingli, a shikumen community on Beijing Road W., has seen some residents move out while the living spaces of those who chose to remain are renovated.

The relocation of the Baoxingli residents will be followed by a major project to bring back the popularity of the once busy commercial street. The unique buildings on both sides of the road will be preserved and become offices, shops and quality homes.

Qilou is a fusion of traditional Asian architecture and the 18th-century Western veranda style, with some Indian and Arabic influences thrown in. These houses are found chiefly in south and southwest China.

Jinling Road E. has Shanghai's most famous qilou cluster. The road, formerly known as Rue du Consulat, was built by the French in the 1850s and was home to the French consulate, said Xue Liyong, a historian and researcher with Shanghai History Museum.

Developers introduced the arcade, similar to those in Paris, after the road was widened to accommodate modern traffic.

As recently as the 1980s, the arcade, which is about a kilometer long, was a thriving shopping street, one of the city's four most prosperous commercial streets on a par with Nanjing Road E., Huaihai Road M. and Sichuan Road N. 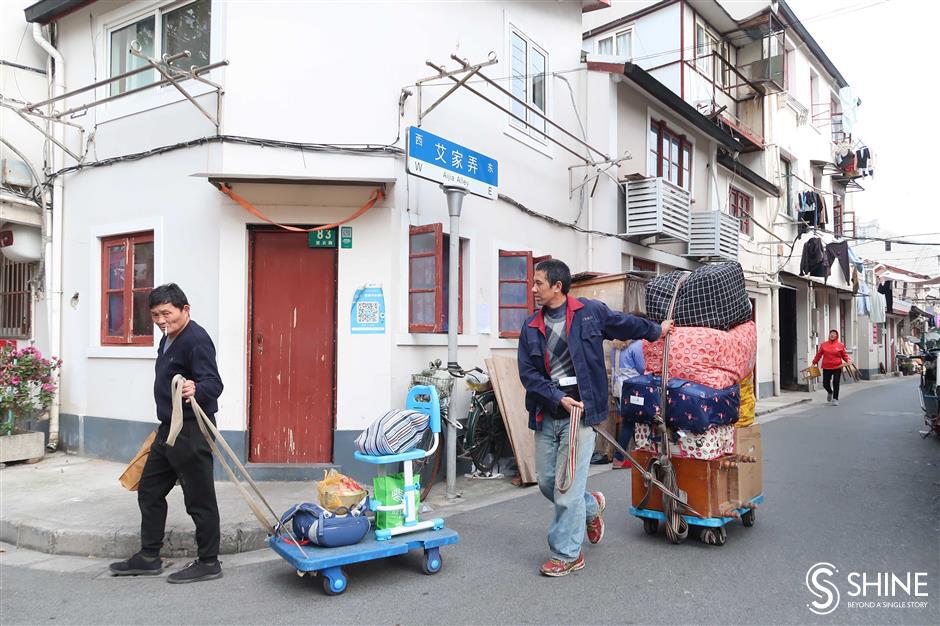 Residents move their belongings from the Qiaojia Road neighborhood.

During the Lantern Festival in February, Ni returned to Baoxingli with many neighbors to recall their former bittersweet life over the years.

She visited her former home in a typical shikumen house on Ninghai Road E. Nine households of people once squeezed together in the unit initially designed to accommodate a single family.

“It is hard to imagine that my daughter had spent nearly three decades here with us until her marriage,” Ni recalled. “She used to bathe with a plastic bottle and shower curtain in the middle of the room, when my husband had to leave to take a walk.

“I used to always bend down in the cramped quarters, but now I feel happy every day in my new home,” she said. 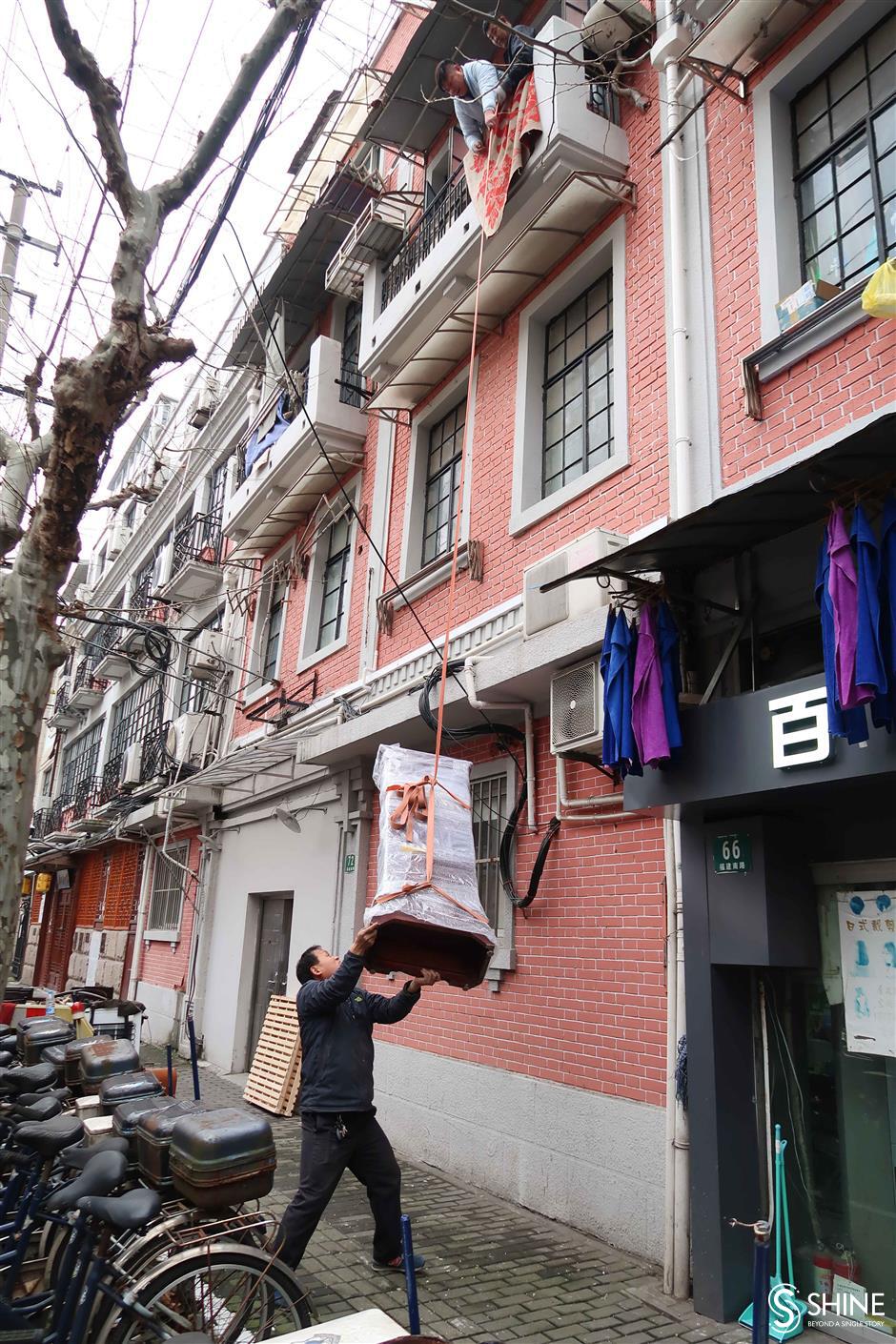