A cup of coffee, a paddy field, a basket of wood ears. Connecting these seemingly unrelated elements is not, as one might imagine, an impressionist image, but a rural café tucked away in a village in west Shanghai, where crystal-clear rivers circle or cross a vast cropland and a water conservation forest. 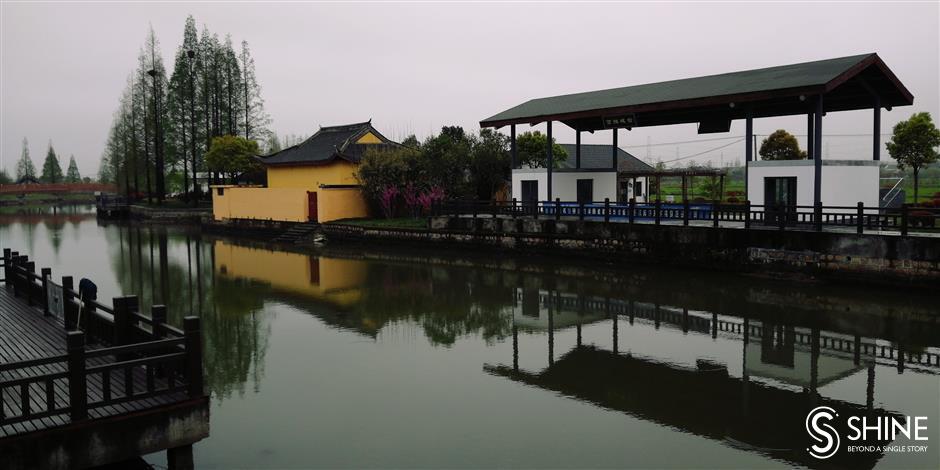 It took me quite some time a few days ago to discover J Coffee through a labyrinth of wetlands, paddy plantations, fungus fields and rows of well-shaded farmers’ houses in Dongzhuang Village, Qingpu District. Two young men I met at the entrance of the village had shown me opposite ways. When I finally found it with the help of a third young man and an old farming couple, I knew why the rural café, the latest online hit among some of the city’s coffee addicts, was like a secret garden “invisible” to the undiscerning eye.

I had thought it would be a simple replica of a city café, with conspicuous logos on glass walls or doors, but J Coffee has a rustic simplicity. Its outlook is no different from neighboring farmers’ houses. When the old farming couple I chanced upon told me the café was only a stone’s throw away, I could not believe my ears. I looked around and yet could not spot any café logo, let alone glass walls or doors. All that met my eyes were ordinary farmers’ houses.

“Are you sure there’s a café here?” I asked the old couple with a shy grin. They were taking off their dusty rain shoes at the doorstep of their house. Apparently they just came back from working in the field.

“We heard about the café only recently,” the old man answered with a friendly smile, his wrinkled face attesting to a life on the land. “It’s in that flat house.”

This time, I fixed my eyes on a house about 50 meters from the old couple’s home. I had seen it before and mistook it for another ordinary farmer's house. The outside wall facing us is made of bricks and concrete and has a faded color of clay, in stark contrast to my imagined glassy surface. I drew myself nearer, passed a narrow alley, and finally reached the front door of the café, which faces a broad paddy field bordering a water conservation forest, under which wood ears, mushrooms and certain other kinds of fungi grow. 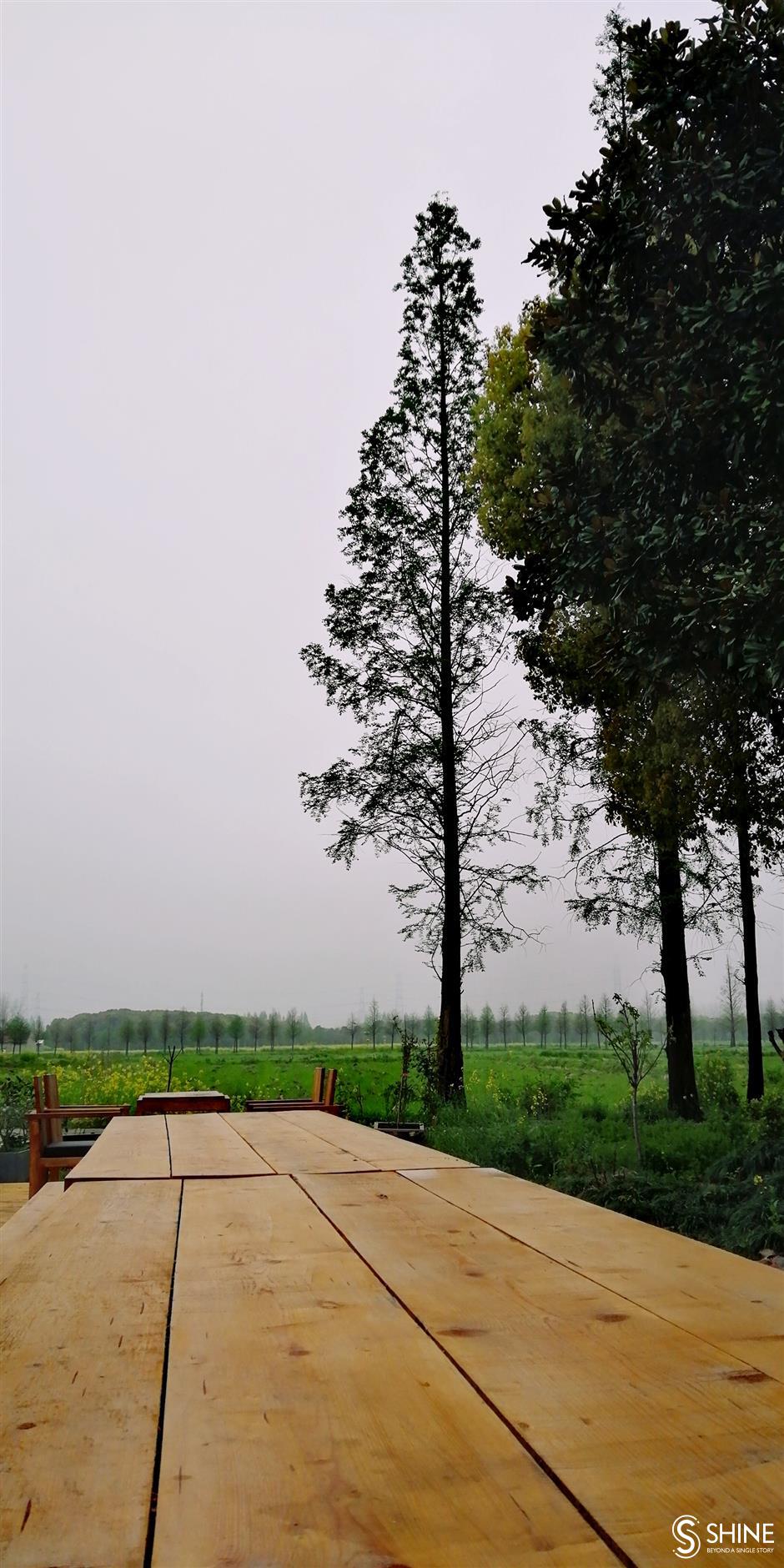 J Coffee is situated in the heart of a bucolic village in west Shanghai.

I found myself standing in the center of a well-preserved pristine village, where clean rivers reflect the images of trees, flowers, bridges and houses like polished mirrors do.

I went into the café, ordered a cup of Americano, and came out again, sitting at a table by the tree-flanked paddy field.

Decades of experience in tea tasting has sharpened my sensitivity to water quality. In traditional Chinese tea culture, you can produce a cup of first-class tea even if the tea leaves are second-class – provided you use first-class water. When I sipped my Americano, its water tasted almost as smooth as silk, without a trace of stickiness.

“Do you use bottled mineral water or pure water?” I asked, assuming that a good cup of coffee is based on the quality of water used, and that rural water might not be that ideal.

“No, I just use local water to brew coffee,” replied Dai Wenjie, owner of the café. “We’re located in an area where water is well-protected.”

That’s something most singular about the café. Sitting here, you can sate your stomach as well as your eyes with crystal-clean water like few other places have. You don’t need bottled water transported from afar. 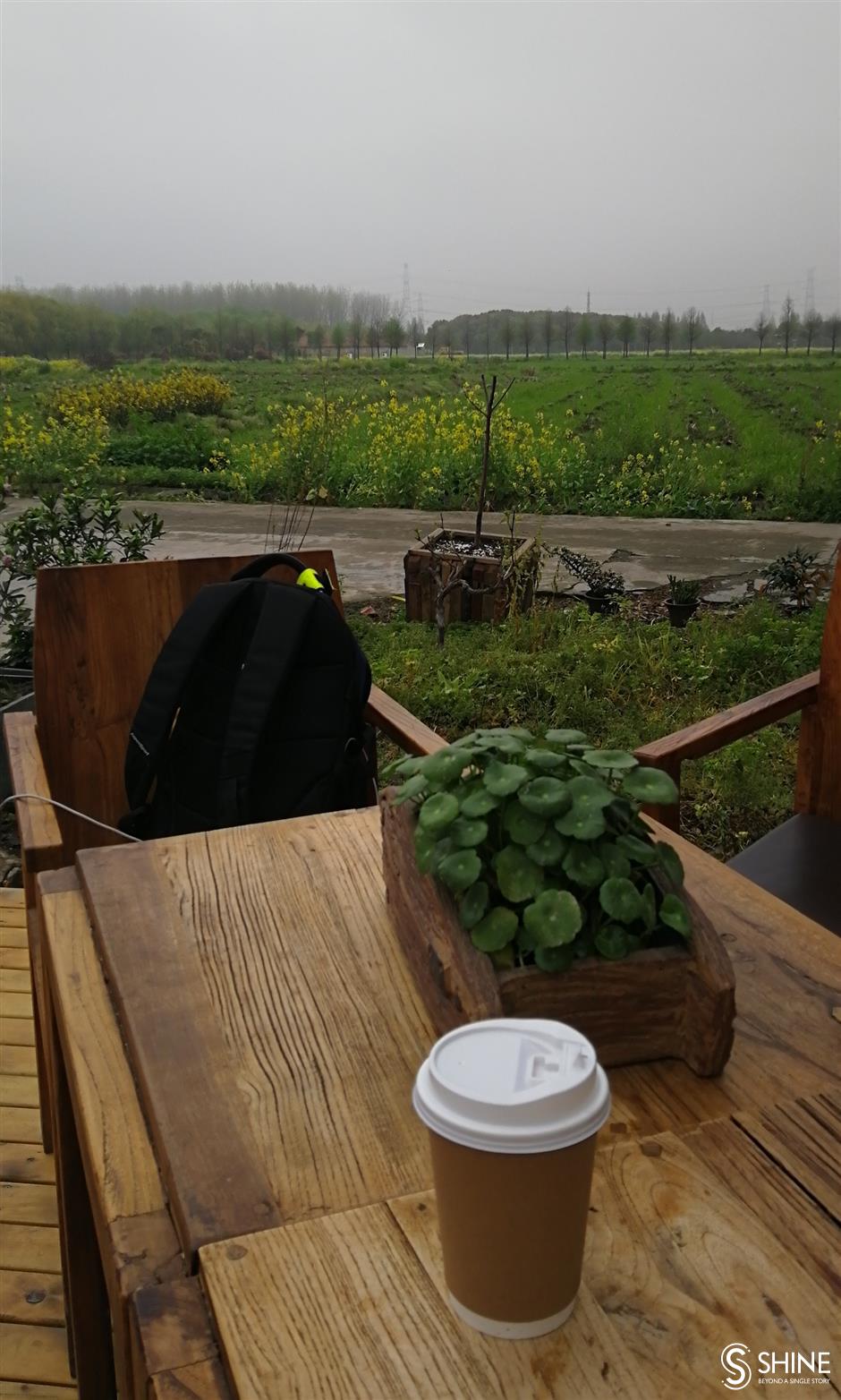 Behind the café is a story beyond simply shifting a shop from the city to the countryside. More importantly, it’s a story of how a Shanghai village has helped improve the country’s water quality by reducing agricultural pollution.

Pointing to a vast area of rapeseed flowers, Sun Jianqiang, Party secretary of the village I happened to meet on my way to the café, said: “They are a kind of ‘green fertilizer,’ which will be buried in the land toward the end of this month or in early May to nourish the soil before rice seeds are planted.”

This way, he explained, the village has reduced the use of chemical fertilizer, the residues of which tend to pollute rivers and lakes. To promote green agriculture, Sun said the village has created a 480-mu (32-hectare) “tortoise” paddy field, so called because tortoises living in the field can protect plants from pest attacks.

This is no small feat, considering that more than half of China’s villages have yet to spruce up their environments. China Environmental News reported on Monday that many villages across the country still suffer from large areas of foul water.

As I relished my Americano by the paddy field, a Xinhua news agency reporter who happened to be around told me farmers were busy picking wood ears and mushrooms in the fungus field nearby. I rose to my feet immediately and got there in less than 10 minutes.

“Wood ears and mushrooms grow well in an environment where there’s clean water,” a technical expert explained as he accompanied me on a walk through the field.

“I’ve never seen such big wood ears!” I told one woman bending her back while putting fresh-picked wood ears into one basket after another.

“You can take a basket home!” she said warmly.

“Next time,” I replied earnestly. “I’ll invite my wife to come with me. She will love all these wondrous wood ears.”

A cup of coffee, a paddy field, a basket of wood ears — all these rural pleasures have their roots in rivers made ever cleaner.

On April 9, speaking of the economic, ecological and aesthetic values of the countryside and agriculture, Shanghai Party Secretary Li Qiang said: “Let rapeseed flowers in spring, lotus leaves in summer, rice flowers in autumn, and wheat shoots in winter become an inspiring landscape for residents.”

No doubt, it’s a rural landscape based on clean water. In the same vein, water works wonders in urban landscaping. 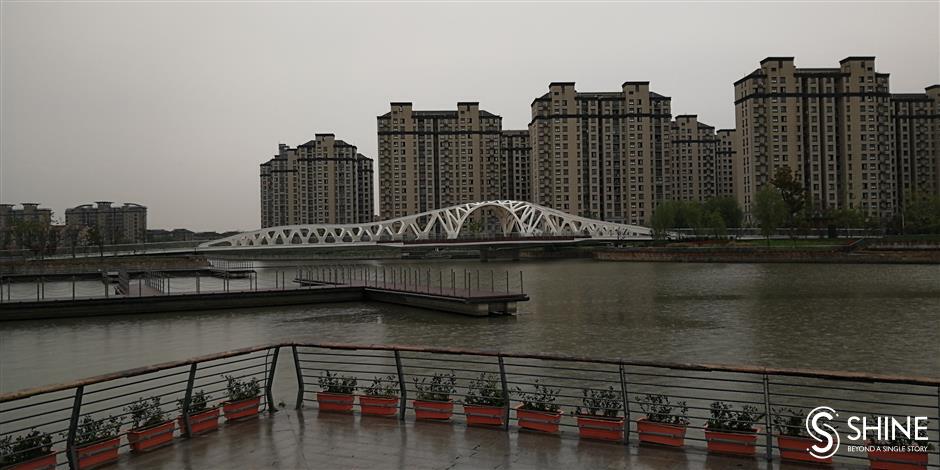 On March 26, Li Qiang visited Highest Good Square (Shangshan Square) in Qingpu District during a field trip to promote and coordinate citywide water treatment. He called for a symbiosis of the city and its waters in which man and rivers “befriend” each other.

Highest Good Square is part of the 1.5-million-square-meter Qingpu Round-City Water Park completed last year. The site of the square used to be wasteland. It has been converted into part of a wetland park at the doorstep of nearby residential communities.

On a drizzling day last week, I ran into a 55-year-old man from Jiangxi Province who told me he walks in the wetland park for one hour every day after he takes a rest from babysitting for his daughter at her nearby home. 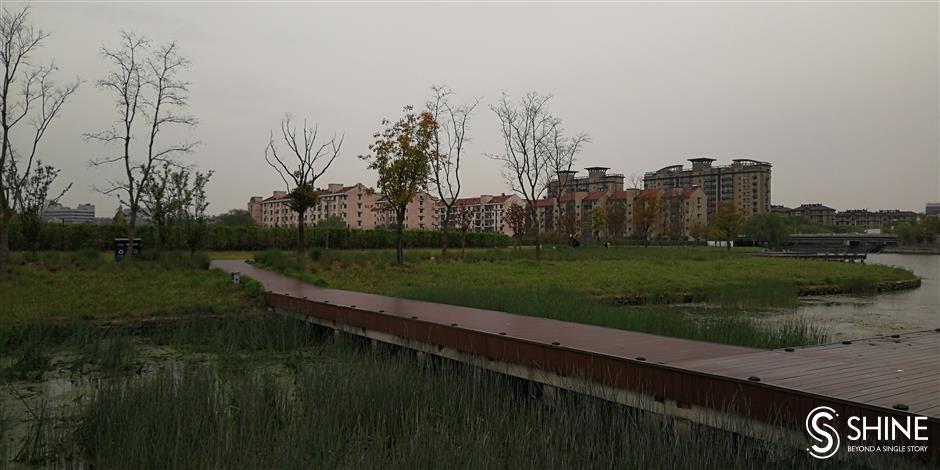 A piece of wasteland has been converted into a wetland park.

“I didn’t know this park before,” he said. “My daughter told me there’s been a big change here over the past few years. So here I am. I love it.”

According to local planning, a central park and main riverside belt will soon be built to the north of Highest Good Square. A thermal power plant nearby will be converted into an industry museum.

Five kilometers to the south of the square is a landmark water city gate built recently according to historical records. On one side of the gate is a peninsula where a river and tributary converge. The peninsula used to be cluttered with small factory buildings, which often polluted the rivers. 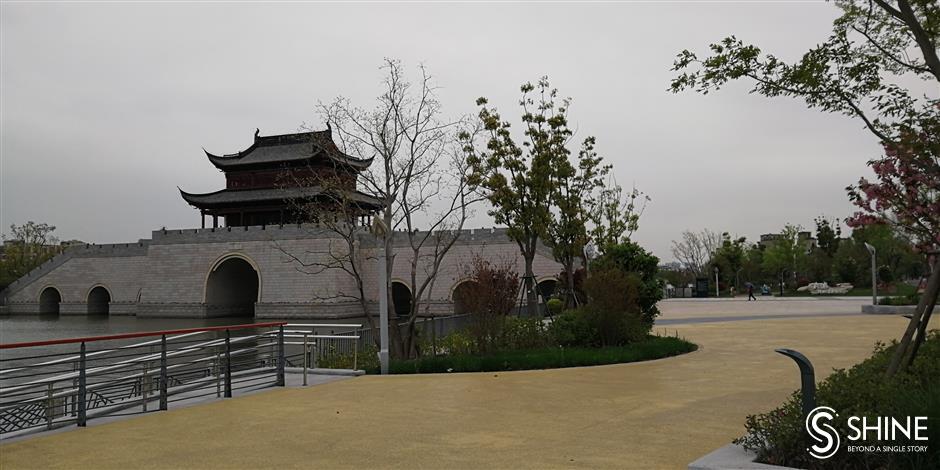 A water gate has been built according to historical records at the southern side of the Qingpu Round-City Water Park.

“I moved to a nearby community in 1990, and for a long time people would not come close to the rivers,” said a 65-year-old man surnamed Tao. “It was unapproachable in those days. The surface of the rivers was oily sometimes.”

He said he was familiar with the peninsula area because his wife used to work in a factory there, which has been relocated.

“Now it’s a lot more beautiful here,” he said, wiping sweat from his face. He said he now jogs about 10 kilometers every day between his home and the water park.

The park, which surrounds nearly 400,000 residents, includes a 43-kilometer riverside pedestrian path and greatly expanded water and forest areas. In place of chaotic factory houses, a large grassland has taken shape where people can relax. Some buildings of an old cement factory have been preserved, ready to be converted into a theme hotel. 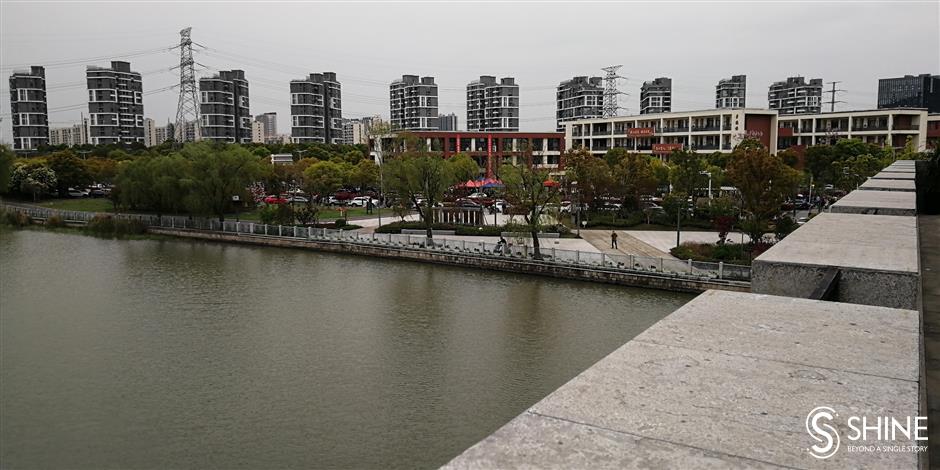 A view of riverside communities from the water city gate 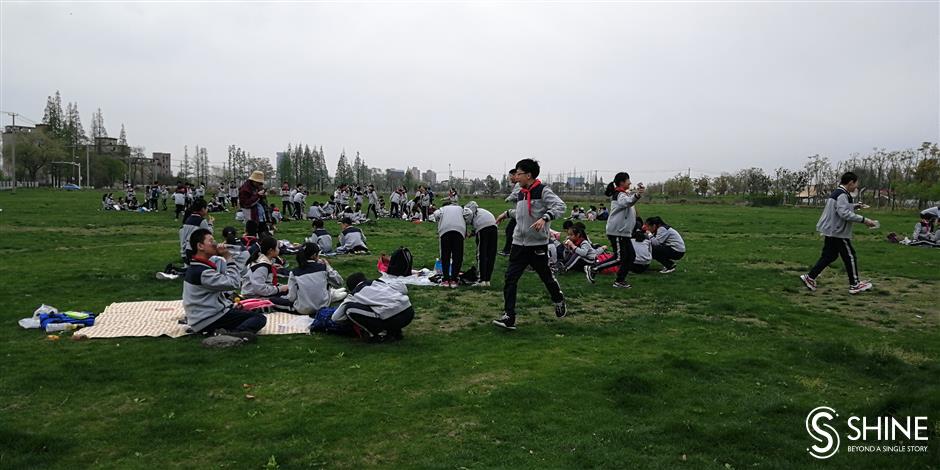 A group of middle school students play on a large grassland at the Qingpu Round-City Water Park.

Stephen J. Hoffmann, author of “Planet Water: Investing in the World’s Most Valuable Resource,” once said: “The importance of the water and waste water infrastructure for safeguarding health, supporting economic growth and protecting the environment cannot be overemphasized.”

He added that water is also “a resource with paramount ecological significance.”

By way of personification, a top Shanghai leader has called for coordinated efforts to make the city’s water system “feel comfortable from head to toe.” In other words, every river, big or small, will be treated properly.

While Dongzhuang illustrates how a village can clean its rivers by reducing agricultural pollution, the Qingpu Round-City Water Park shows how water can be made to “befriend” people in an urban setting. Together, they demonstrate Shanghai’s can-do spirit in safeguarding the health of water, the source of life.